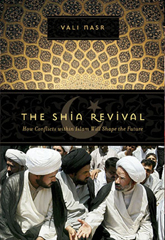 It is clear today that America cannot take comfort in an imagined future for the Middle East, and cannot force the realization of that future. Such an approach guided the path to war in Iraq and has proven to be unworkable. The lesson of Iraq is that trying to force a future of its liking will hasten the advent of those outcomes that the United States most wishes to avoid. Through occupation of Iraq, America has actually made the case for radical Islam–that ours is a war on Islam–encouraging anti-Americanism and fueling extremism and terrorism. The reality that will shape the future of the Middle East is not the debates over democracy or globalization that the Iraq war was supposed to have jump-started but the conflicts between Shias and Sunnis that it precipitated. In time we will come to see this as a central legacy of the Iraq war.

The task before America is now to take stock of the reality of the region after Iraq and to build its relations with the Middle East with that reality in mind. The first fact that confronts the United States is that the most salient threat from extremist interpretations of Islam now wears Sunni garb. It is Sunni militancy–al-Qaeda, Wahhabi and Salafi activists, and the network of Muslim Brotherhood organizations throughout the Middle East, North Africa, and Europe–that poses the greatest threat to U.S. interests. Religious and political ideology among Sunnis in the Middle East, unlike among Shias, is moving in the wrong direction, toward militancy and violence. If the Shias are emerging from their dark years of ideological posturing, revolution, and extremism, the Sunnis seem to be entering theirs, or at least passing into a darker phase.

A grassroots outpouring of sympathy for the victims of September 11 occurred on the streets in only two places in the Muslim world, both within days of the collapse of the twin towers, and both among the Shia. The first was in Iran, where tens of thousands snubbed their government to go into the streets of Tehran and hold a candlelight vigil in solidarity with victims of the attacks. The second was in Karachi, where a local party that is closely associated with the city’s Shia broke with the public mood in Pakistan to gather thousands to denounce terrorism. What followed September 11 in Afghanistan and Iraq has only strengthened these feelings. The Shia in Afghanistan, between 20 and 25 percent of the population, were brutalized by the Taliban. The constitution adopted in that country in 2003 has broken with tradition to allow a Shia to become president and to recognize Shia law. The Shia have come out from the margins to join the government and take their place in public life. The violent face of Sunni militancy in Iraq underscores the divergent paths that Sunni and Shia politics are taking.

The Shia revival constitutes the most powerful resistance and challenge to Sunni extremism and jihadi activism within the region. Shia revival is an anti-Wahhbi and anti-extremist force. Its objectives are served by change in the regional balance of power and democracy. In turn, democracy will unleash the full extend of the Shia challenge to Sunni extremism. Democracy will bring to power Shia majorities and give greater voice to Shia minorities, whose ideology and politics diverge from the extremist bent of Sunni radicalism.

The war in Iraq may take many directions. The country may split up or hold together; it may sink into civil war, or its competing communities may hammer out a power-sharing formula to make it work. Stability will require compromise among Shias, Sunnis, and Kurds, but it will still place Sunnis at the bottom of a power structure that they once ruled. This will not douse the flames of Sunni extremism that Iraq has stoked across the Middle East. The United States cannot decide what direction sectarian conflict will take. It will instead have to prepare for the unintended consequences of the Iraq war. A second explosion of Islamic extremism will come out of the Iraqi insurgency, whose force and tenacity will be entwined with the Shia-Sunni power balance across the Middle East, and which will seek to use sectarian conflicts to expand the scope of its jihad across the region.

There will also be new forces to contend with–the new Shia voices, separate from the old Arab order with which Washington is so familiar. When the dust settles, the center of gravity will no longer lie with the Arab Sunni countries but will be held by Shia ones. That center of gravity will move eastward, away from Egypt and the Levant to Iran, Iraq, and the Persian Gulf. The United States does not know the Shia well. That will have to change, if for no better reason than that the Shia live on top of some of the richest oil fields in the region. It is in America’s interest to take Shias and the Shia revival seriously. It will be not easy for the United States to balance the demands of Sunnis with those of Shias, or to hold the hands of the Sunni establishment as it contends with the Shia challenge and the Sunni backlash to it. It is a process that must begin with an understanding of the nature of the conflict and the future that it will shape.

Sectarian identities in the Middle East stretch back a millennium. They matter to society and politics, but the conflicts that they animate are due to the lopsided distribution of resources and power that have benefited one sect at the cost of the other. Over time the Shia-Sunni conflict can be brought under control only if the distribution of power and resources reflects the demographic realities of the region. Dictatorships have done a poor job of building such an order. They have used force to impose the will of the minority over that of the majority, which is a problem in the Middle East well beyond the borders of Iraq–but that is not a lasting formula nor one that will survive political openness. Nor will the messy processes of democratization and globalization immediately solve these problems: they will have winners and losers as well and ignite new conflicts. As is the case with all disputes involving religion or ethnicity, loyalties dies hard, but they are less likely to command bloodshed if they are divorced from social, economic, and political injustices.

The Middle East is bound to go through–indeed, is now going through–a period of violence as the old order gives place to a new one and Shias and Sunnis adjust to the new realities. In time, however, the region will arrive at a new status quo. Most Shias and Sunnis will look for ways to reach a state of peace, to live together and share political goals and aspirations. Democracy will be far more efficient than dictatorship at attaining that inclusive goal. Future stability must be based not on the hegemony of one sect over another but rather on an inclusive vision of Islam and the Arab world that will recognize the identity and beliefs of both Shias and Sunnis and distribute wealth and power in accordance to numbers.

Those forces that are most dangerous to Western interests and to the peace of the region are likely to thrive during this transition. It is in the interests of Shias, Sunnis, and the West to minimize the pains of transition and hasten its end. This means contending with the reality of sectarian rivalries and understanding what motivates them and how they play out socially and politically. As in all wars of religion and conflicts over identity, in the end, peace, like war, is a function first and foremost of recognizing the fact of differences, and only then going beyond them in the pursuit of common goals. It is not possible to tell how the sectarian struggle in Iraq will turn out, or when and where the next battle between Shias and Sunnis will be joined, or how many sectarian battles the Middle East must endure and for how long. What is clear is that the future for the Middle East will not be brighter than the past so long as the shadow of sectarian conflict hangs over it. This is the conflict that will shape the future.