BOB ABERNETHY, anchor: We have a story today about a woman who is both African American and an Orthodox Jew, a rare but real combination in this country. Her very name expresses her mixed identity — Yavilah McCoy — and she is devoting her talent and energy to using music — Gospel music — to try to overcome the prejudice she has experienced from other Jews. Menachem Daum reports. 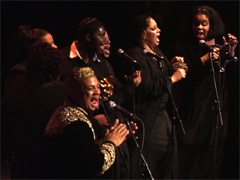 MENACHEM DAUM: Yavilah McCoy is one of several thousand African-American Jews. To create a better future for her children, Yavilah wants it known that Jews come in a variety of shades and colors. For the past several years, Yavilah has led workshops that combine classical Jewish liturgy with her family’s rich Gospel tradition.

Ms. MCCOY (leading group of white Jews singing in Hebrew the Gospel version of “Modeh Ani Lifanecha”): And the kishkas are about this soul: “Thank God for this soul that’s in me, oh yeah.” He woke me up this morning and I’m glad, so glad, about it.

The spirit doesn’t have a color, and this whole thing I do now with song is just because I feel like music is a way in which people access spirit quite immediately.

UNIDENTIFIED JEWISH WOMAN: I’m sure there are white Jews who may have taken Hebrew songs and put them to Gospel music, just because Gospel’s part of our vocabulary, our musical vocabulary. But if a white Jew would do it I’d say, like, you know, I would say that isn’t ours.

DAUM: The road towards Judaism was begun by Yavilah’s grandparents. Her grandmother Jeanette studied the Old Testament and concluded that the biblical children of Israel were actually Jews of color. For this reason, Jeanette rejected Christianity and became a member of the group known as “Black Israelites.” 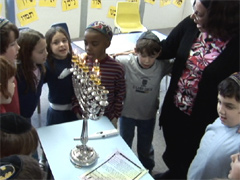 JEANETTE TATE (Grandmother of Yavilah McCoy): We were brought to this country and subjected. We were taken away from what we originally were, and we were taught how Christianity began and how it enslaved our people and how Christianity was imposed on us.

DAUM: As a Black Israelite, Yavilah’s grandmother was not recognized as a Jew by most Jewish denominations.

DAUM: Yavilah’s mother, Adeena, wanted to be acknowledged as a Jew without any questions, so she converted to Orthodox Judaism. But when she started having a family she learned that acceptance was hard to get.

Ms. FULCHER: My children started in the yeshivas at a very early age; as soon as they basically were toddling they were in yeshiva. That was not, first of all — depending on where they were — that wasn’t always pleasant. My children paid a price.

Ms. MCCOY: I was in third grade, and they didn’t want to hold my hand. When they would say line up, you know, the kids were scared.

Ms. FULCHER: It traumatizes you. It does things to you, but it doesn’t change who I am. It doesn’t change the fact that we’re Jews. Like it, lump it, or indifferent, that’s who we are. We’re Jews.

Through music, you don’t have to work that hard. You don’t have to sit and have a conversation with me about what are the obstacles to welcoming difference. All you got to do is just open yourselves up to the music. 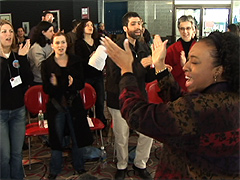 DAUM: For the sake of her children Yavilah has founded an organization called Ayecha. One of Ayecha’s main events is an annual concert designed to build a community of acceptance for Jews of color.

Ms. MCCOY (speaking to crowd): Whooo! Everybody, hello. Need some of your attention! Okay, you are at a Jewish soul celebration. Welcome. If you didn’t know it, you have arrived at a journey that we’re going to take this evening through the music of Jews from cultures that come from Jerusalem all the way to Africa.

Ms. MCCOY (speaking to crowd): If everybody in here has the spirit say, “Amen.”

Ms. MCCOY (speaking to crowd): If everybody wants to see this again, say “Mazel Tov.”

Ms. MCCOY (speaking to crowd): If everybody in here wants to go, say “Oy Vey.”

At the end of the day, if all we get to be is white or black Jews, it creates a situation where people have to leave parts of their identity behind. So Ayecha is giving people around the country a taste of what they’re missing every single day. People get a taste of what’s to come. They get a taste of that Jewish community that doesn’t exist yet.

DAUM: Whether or not Yavilah’s song will create the better world she dreams of remains to be seen. But she is guided by the Talmud’s teaching: You’re not obligated to complete the task, but neither are you free to abandon it.

For RELIGION & ETHICS NEWSWEEKLY this is Menachem Daum in New York.

THE COLORS OF JEWS: RACIAL POLITICS AND RADICAL DIASPORISM by Melanie Kaye Kantrowitz DIASPORA: HOMELANDS IN EXILE by Frederic Brenner

The Jewish Press: "Minority within a minority" by Ita Yankovich, January 10, 2007 Ayecha: Yavilah McCoy Beliefnet: "African American and Orthodox Jew" by Debra Goldberg Chronicle of Philanthropy: "A fledgling grant maker nurtures young Jewish social entrepreneurs" by David Whelan, May 8, 2003 Black and Jewish: A Community for Jews of Color United Jewish Communities: "For Jews of every color and culture, identity and belonging key issues" by Loowla Khazzoom