FRED DE SAM LAZARO, guest anchor: Next, to southern Utah and to the pain of children cast out or escaping from polygamous communities. Polygamy was outlawed by the Mormon Church more than 100 years ago, but it has survived in pockets, largely isolated on the edge of Mormon society and the law. The recent trial and conviction of Warren Jeffs shed some light on the practices of the polygamist group he led, called the Fundamentalist Church of Jesus Christ of Latter Day Saints. The Jeffs case has galvanized efforts to rehabilitate children leaving these communities who number anywhere from 600 to 1,000. Correspondent Lucky Severson provides a glimpse into their lives.

LUCKY SEVERSON: This is St. George, Utah, not far away from a polygamist town that’s been accused of driving away many of its young men.

KEVIN (to Bruce): Homecoming was so cool.

SEVERSON: It’s why there’s a new shelter here, funded by the state and private donors, to care for kids who have been kicked out of or ran away from the only home they ever knew — kids like Kevin and Bruce, who had been told that the outside world was a terrible place.

BRUCE: We were told everyone out here was bad and nobody cared about you. Nobody is going to help you.

KEVIN: Everybody kind of has a hard time. I mean, you always stick out because, I mean, you were raised so much different.

SEVERSON: When Kevin ran away he left a large family he was very close to. Michelle Benward, a psychologist, says Bruce and Kevin have suffered the trauma of separation from their families, and many boys like them are ill prepared to live in a regular society. And, she says, there are lots of them.

MICHELLE BENWARD (Psychologist and Vice President, New Frontiers for Families): I asked them, “How many kids are there like you?” They said, “There’s hundreds of kids like us.” And I really could not wrap my mind around the idea that there were hundreds of kids, a significant number of them under 18, living on their own.

SEVERSON: The kids come from a community about 40 miles east of St. George on the Utah-Arizona border. It’s a town of about 6,000, and most everyone here practices or believes in polygamy. It’s never been a place friendly to outsiders. The town was once known as Short Creek, which is why the boys are now known as the kids from the creek, even though today the place is called Colorado City by most people. Polygamists settled this isolated part of the world about 100 years ago, undoubtedly hoping to avoid snoopy neighbors and the authorities. But the world is growing smaller.

The Mormon Church condemns polygamy and outlawed it more than 100 years ago, but some breakaway groups still live it. For many years, authorities cast a blind eye on the open practice of polygamy. Although it’s illegal, polygamy is often difficult to prosecute. The men marry their first wife legally, then marry other women in secret ceremonies. But state officials started to get involved about the time the group, known as the Fundamentalist Church of Jesus Christ of Latter-day Saints, or FLDS, got a new prophet. His name is Warren Jeffs, and he achieved international infamy when he was recently convicted of being an accomplice to rape for pressuring a 14-year-old-girl to marry her first cousin. Critics also accuse Jeffs of forcing young men to leave Colorado City and their families.

ELAINE TYLER (HOPE Organization): All my hours I was at the trial…

Ms. TYLER: I have no issue with polygamy, but marrying off little girls against a mother’s will and against a child’s will — that’s wrong. That’s child abuse, and kicking these little boys out to fend for themselves so that the older man can have multiple wives — that’s child abuse. That’s wrong.

SEVERSON: No one has proven that the boys were kicked out so the older men could have more wives, although that charge has been made by state officials. It’s disputed, however, by active polygamists who don’t belong to Warren Jeffs’ group. 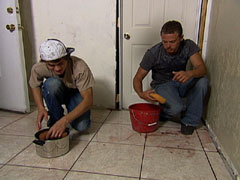 MARLYNE: I think that came from anti-polygamists who had to find a reason: “Oh, it’s got to be because all the old men want the women.” I don’t think that you can say that’s the reason why those men, those young boys, are leaving or being sent out.

Ms. TYLER: About half of the boys I’ve spoken with have said that they were asked to leave. About half of them, they chose to leave. The ones who were kicked out, they — their offenses are something like flirting with a girl, watching a CD, movies, wearing short sleeves. I mean, they’re not really serious offenses. But down in the FLDS culture, they are “hanging” offenses.

KEVIN: Just too many rules. I mean, no movies, and no music, and no videogames, stuff like that. I mean, I could live without that. It was just more all you do out there is work, work.

SEVERSON: We were asked not to use the last names because the kids were concerned that what they said might cast a bad light on their families — families that outcasts like Kevin miss very much.

(to Kevin): What was the hardest thing for you?

KEVIN: My family. I mean, you miss them. They’re your family. That was probably the hardest — your mom, all your brothers and sisters that you were so close to growing up, because it’s such a tight knit community and all of a sudden, yeah, you’re not there anymore.

BENWARD: I can take my most grown young men here and watch them dwindle into a little boy talking about his mom.

SEVERSON: It’s not only boys. A number of young girls, like Melinda, have run away even after she was threatened by her father with eternal damnation if she didn’t comply with the principles of polygamy.

MELINDA: He just told me that if I didn’t get my act together then the Lord is going to strike me to hell.

(to Melinda): What did you dad say when he found out you were going for good?

MELINDA: He told me that he would way rather seen me dead, lying in a grave, than where I turned out to be now.

SEVERSON: For these fundamentalists, practicing polygamy is the only way to reach the highest kingdoms of heaven.

Ms. TYLER: You’d have to go back to the Joseph Smith doctrine. I mean, he said you’ve got to practice polygamy. It’s the new and everlasting covenant. If you don’t practice it, you’ll be damned. So the folks that now, today, are practicing polygamy, they follow the doctrine of the early Mormon scriptures. And they believe that that’s their ticket to heaven that’s going to get them to their eternal salvation by living plural marriage.

KEVIN: I couldn’t deal with the whole placement marriage thing. You don’t know who you’re going to get married. They just assign you to somebody. I mean, yeah, that’s kind of scary.

MELINDA: Out there, you’re like, “Oh, here’s your husband. You’re getting married to him. Have kids.”

Ms. TYLER: The girls are taught from birth that their role in life is to have babies and be a good priesthood wife. That’s — that’s their whole purpose in life is to get married and have children to build up the kingdom of God.

SEVERSON: We hear about girls getting married out there at 14 years old. Does that really happen?

SEVERSON: She says she lived for a while with Warren Jeffs’ 63rd wife who was 17 when she married him. Melinda says Jeffs dictates who girls should marry.

LINDA: How was school today?

SEVERSON: The two polygamist wives we spoke with, who are part of another polygamist group, say if 14-year-olds are being forced into marriage it’s the exception, not the rule.

LINDA: I think that was just a total exaggeration to get the rise out of the public about the young, all the young girls getting married, and having to marry these old men.

MARLYNE: It’s not like it’s all about sex. Your marriage is about family. It’s about relationship. It’s about the values that you have.

SEVERSON: But critics say enforcing those values, at least among Jeffs’ disciples, borders on abuse.

(to Melinda): Did your dad ever punish you?

MELINDA: Yeah, I was on house arrest for a while.

(to Melinda): What did that mean?

MELINDA: My — get an ankle bracelet on your foot, couldn’t go 100 feet without, within the perimeters of the yard.

SEVERSON: Everyone agrees that boys from “the creek” are good workers. Some started working construction when they were 10 years old, long days with sometimes no pay. The problem is most never get more than an eighth-grade education. 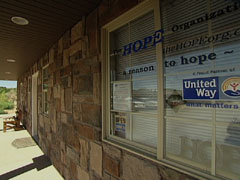 Ms. BENWARD: Most of their education is focused on religiosity and Warren Jeff’s’ perspective of the world. They don’t know the history of the United States or the Constitution. Most of them don’t have math or English skills.

KEVIN: They don’t teach you about sex, marriage, anything like that.

SEVERSON: And once these kids are on the outside, they often get into trouble.

MELINDA: I had hooked up with the wrong guy and started getting into like drugs and stuff.

KEVIN: What the majority of people do when they leave is they get way hard into the drugs, alcohol, stuff like that.

SEVERSON (to Kevin): Did you?

KEVIN: Yeah. For the first year I was into all that, and I mean, it just — it gets old just like everything else, and it ruins your lives, and so I’m pretty much out of all that now.

SEVERSON: Kevin’s adjustment to the outside world has been guided in part by Michelle. She’s involved in an effort to give these kids a chance at a different life. This home provides temporary housing. The staff will help the kids get an education and jobs. But still, Michelle and Elaine say it isn’t enough.

Ms. TYLER: There’s a lot of other ones out there. They’re living in their cars. They’re getting in a lot of legal trouble.

SEVERSON: Nine of Melinda’s brothers and sisters have left Colorado City, but 18 are still living there.

MELINDA: I think people should intervene. Like go out there and try to stop it.

SEVERSON: But polygamist wives we spoke with don’t see it that way.

LINDA: For some reason in the United States of America, “the land of the free and the home of the brave,” God forbid that we’re not allowed to live our religion.

SEVERSON: Will you join a church?

BRUCE: No. I think it ruined my whole church experience.

SEVERSON: Growing up that way?

BRUCE: Yeah. Nobody’s going to tell me how I’m supposed to live my life. It’s too scary because now I look back on it, I was like, I was so controlled.

SEVERSON: No one knows how many more kids from “the creek” will be coming out now that Warren Jeffs is in prison, and no one here is willing to talk about the future of this polygamist town.