FRED DE SAM LAZARO, guest anchor: In the aftermath of the epic fires in southern California, worship communities have joined the relief effort well beyond their congregations. Their services are now as much practical as spiritual. We have a report from Saul Gonzalez.

SAUL GONZALEZ: It's been a common sight in the fire damaged neighborhoods of southern California this week: families, friends and volunteers sifting through the debris of burned down houses, looking for possessions that survived the flames and can be returned to fire victims. In the ashes of this residence, volunteer workers, members of a local rugby team, discovered some of the homeowner's jewelry with out a singe on it.

UNIDENTIFIED VOLUNTEER WORKER: Oh, it's still intact too. Look the paper is not even burned.

GONZALEZ: As residents come to grips with the aftermath of the blazes, so too do houses of worship in the worst hit areas. The Baptist church in the San Diego suburb of Rancho Bernardo saw much of its sanctuary destroyed when the roof caught on fire.

STEVE HANNAH (Trustee, Rancho Bernardo Baptist Church): It's going to be quite a restoration. They're going to have to gut the inside of the church. 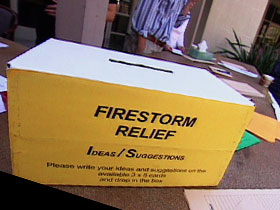 GONZALEZ: Church services here have been turned into forums where fire victims can share their harrowing experiences. Erin Johnson's house was consumed by the flames, but she told the congregation her ordeal had strengthened her faith.

ERIN JOHNSON (speaking before congregation): You know it was absolutely terrifying for about an hour, maybe an hour, when you're throwing your kids in the car, and people ask if you have lost everything, and we did. We didn't have a chance to put anything in the car.

GONZALEZ: Many houses of worship, like Rancho Bernardo's Community Presbyterian Church, have focused on practical assistance to fire victims, from organizing a relief fund to offering experts on insurance --

GONZALEZ: -- to distributing free tools and other items so fire victims can begin their clean up efforts.

SHERI WOODLEY (Director of Family Ministries, Rancho Bernardo Community Presbyterian Church, speaking to a fire victim): I can get you some boxes, too.

Ms. WOODLEY: Whether they're church members or not, anyone who would like to come here, we're trying to give them the resources, so we built sifters, we provided shovels, masks, gloves, water, anything to help them go through and find any type of treasure they can.

GONZALEZ: The church, like so many others, is also sending out small teams of people to help victims clean up the wreckage of their homes and search for family valuables. This morning one team has come to the house of Mark and Brenda Fowler.

MARK FOWLER (speaking to volunteers): Thank you for coming. You bless us by being here.

GONZALEZ: They quickly go to work clearing broken tiles from the collapsed roof, hauling out heavy charred items, and combing through the ashes for that family photo or heirloom that might have survived the blaze.

GONZALEZ: Like so many residents in neighborhoods that burned, Mark Fowler is taking the loss of his home stoically.

Mr. FOWLER: We really believe that the things we have are really gifts from God. Don't let me fool you. We have struggled some of these times with some of these things, but the fact that we're going to have to rebuild it is not that big of deal. He gave it to us to begin with. He will give it to us again. He blesses us.

In the aftermath of the epic fires in southern California, worship communities have joined the relief effort well beyond their congregations. Their services are now as much practical as spiritual.