BRENT HANSON (Artistic Director): The Hill Cumorah Pageant is a volunteer operation. All the actors and staff members are here out of the goodness of their hearts because they believe in the cause and they're excited to be participants in it.

COURTNEY DONE (Participant): It’s the first time I’ve ever been this part. So I get married on stage and then I travel through the wilderness before they have the boat scene. And that’s probably one of my favorite things to do.

HANSON: This year the cast has 750 people in it. And that's part of the excitement of the show, it's just plain big. The cast members are from across the United States, 30 some states this year, several international families participating. The pageant is loaded with costumes, special effects. The soundtrack has been recorded by the Mormon Tabernacle Choir. This site in the Palmyra, New York area is really the cradle of our faith. It's where Joseph Smith lived when he first began to receive revelations from our Father in heaven. This is the site where the Book of Mormon was translated largely and where it was eventually published. That was in 1830. And it is exciting to be in the actual place where some of these events which are so special to us as members of the Church of Jesus Christ of Latter-day Saints took place, there's a sense of coming home. A sense in some ways of a pilgrimage, although that's not a tenant of our faith exactly. 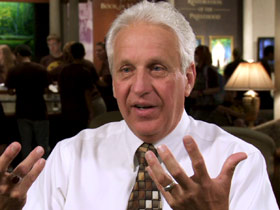 The story starts out in the Book of Mormon with a group of people who leave Jerusalem. They're led by a man who’s had revelations from God:

LEHI: The Lord spoke to me in a dream last night. He told me to take my family and go into the wilderness.

HANSON: Those people are eventually led to the American continent. It's their new promised land. After they arrive, they have problems. There are brothers who don't get along, who have different ideas about how things should be run. And eventually they split into two groups of people and they have ongoing conflict for centuries. The Book of Mormon was written by those ancient prophets in America, and as their civilization deteriorated, the last of those prophets hid the record.

NARRATOR: Some day your words will be given to a people of another nation so they too can know the fullness of the Gospel of Jesus Christ. The words that Nephi wrote became part of the Book of Mormon. This sacred record would be continued by one prophet after another through all the thousands of years that Nephi's people would live in the promised land of America. 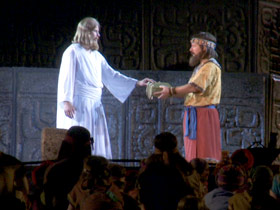 HANSON: Those people were waiting for the arrival of Jesus Christ, just like the people in the Old Testament were, and they were promised that after his resurrection in Jerusalem he would visit them here, and that scene depicting the Savior's visit to those ancient Americans at the meridian of time is certainly the highlight, the climactic scene of the pageant.

JESUS: Ye are my disciples, ye are a light unto this people. This is the land of your inheritance given unto you by thy Father. Write the things which ye have seen and all that I have said. Some day I will establish a great nation in this land, a free nation, and I will give them the words ye write. Ye shall be a witness unto them.

HANSON: That's perhaps what makes us different from the rest of Christianity, the concept is that it's a restoration of what had been before and had been lost.

PROPHETS MORMON AND MORONI: And I shall take these plates wherever the Lord commands and hide them. And then the Lord will keep these plates safe until he raises up a prophet in the latter days. He will send our record forth to convince the world that Jesus is the Christ. It will be called the Book of Mormon. 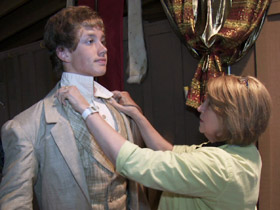 ANGEL MORONI: Joseph, you will translate this book by the gift and power of God. The Lord has a great work for you to do.

NARRATOR: In 1829, Joseph Smith translated the Book of Mormon, and in 1830 it was published in nearby Palmyra, New York. At the Lord's command, God's holy priesthood was restored, and the Church of Jesus Christ was once again organized on this earth.

HANSON: I have great hopes every night, as people come in, that there will be some people who will really connect, who will be searching for the kinds of answers that we're offering, and that their lives will be changed then.

JOSEPH SMITH: The Savior will return. Soon he will be here.

Last year was the 75th anniversary of the annual Hill Cumorah Pageant near Palmyra, New York, a lavish outdoor theatrical production of the Church of Jesus Christ of Latter-day Saints, based on the Book of Mormon.