BOB ABERNETHY, anchor: We have a Road to Damascus story today about a hard-living, cynical Hollywood writer who says he hit bottom one day and was transformed by God. He used to specialize in scripts full of sex, violence, and evil. Now he’s a family man in Ohio. Our story is from Bob Faw.

BOB FAW: Once dubbed by Time magazine “America’s king of sex and violence,” Joe Eszterhas now bears the cross. This is more than ritual.

JOE ESZTERHAS: It’s a very, very serious and sacred moment to me.

FAW: You write, “I carry the cross as though I were actually carrying Christ.”

Actor WAYNE NIGHT (as Police Interrogator John Corelli in clip from “Basic Instinct”): Would you tell us the nature of your relationship with Mr. Boz? 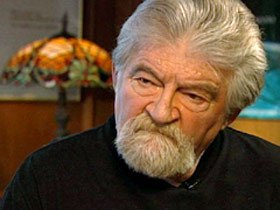 Actress SHARON STONE (as Catherine Tramell in clip from “Basic Instinct”): I had sex with him for about a year and a half.

Mr. ESZTERHAS: I was drawn to dark subjects and dark themes, and I wrote out of a very dark space at that particular point in my life.

FAW: The 16 films he wrote grossed over $1 billion, financed homes in Malibu and Maui, along with an outrageous lifestyle.

(reading from notes): “I’ve been a bad boy all my life. I was the king-daddy of sex and violence, the wild hair, the rogue elephant, the drinking, drugging, wild man, the cocaine cowboy.”

FAW: The alcohol and the cigarettes almost killed him. In 2001, doctors removed 80 percent of his cancerous larynx and inserted a trachea for breathing. Unable to change his ways, high-flying Joe Ezsterhas crashed. 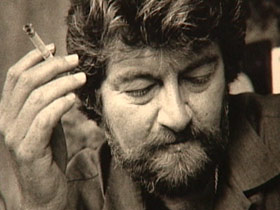 Mr. ESZTERHAS: It was probably the most desolate moment of my life, and a block away from here I sat down on a curb, sweating, shaking, trying to get the bugs out of my trachea, trying to breathe properly, and I started to cry.

FAW: Slumped on that curb, Eszterhas says he felt a dazzling presence, and he heard a voice within.

Mr. ESZTERHAS: And I kept hearing this voice saying, “Please God, help me,” and I realized it was my voice inside my head and that I was praying.

FAW: He was, he writes in his memoir “Crossbearer,” God-struck, and the ultimate Hollywood animal who had scorned religion did not find God. God, he says, found him.

Mr. ESZTERHAS: When you’re absolutely cracked open, and you’re completely vulnerable and desolate, when I opened myself up to the possibility of God entering my heart, I think God did. That day I was ambushed by God.

FAW: That recognition of weakness, says Rabbi David Wolpe, who has studied and written about how the desperate find faith—that recognition is the beginning of strength, even salvation.

Rabbi DAVID WOLPE (Sinai Temple, Los Angeles, CA): I do think that great joy and great sadness or illness sort of crack open something inside you, and it makes you open to things that you before that thought were absurd or ridiculous. 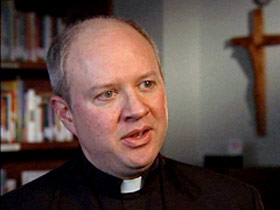 Father DAN SCHLEGEL (Church of the Holy Angels, Chagrin Falls, OH): Somebody wrote God comes through the wound, and, you know, sometimes it’s not until we’re really broken people that God has an entryway into our lives.

Fr. SCHLEGEL: For Joe, I think that there were other gods before him, whether it was alcohol, or whether it was power or money or prestige, or whatever it was, and when all those things didn’t work anymore and he was broken, in  a sense there’s an openness for God to come in.

FAW: Joe Eszterhas had lived through radical change before. Born in Hungary during the Second World War, he spent nearly five years in refugee camps. But the change, which began on that sidewalk in 2001, his wife Naomi recalls, took some adjustment.

NAOMI ESZTERHAS: His transformation, to use that phrase, was so gradual. It was very gradual. Joe is a cynic. He’s had a very — he had a hard life, you know. He ate pine-needle soup in the refugee camps. He was scalded in the refugee camps. He had rickets. He lived in abject poverty. So when he first took those baby steps toward God, it wasn’t without cynicism. I think he went, “OK, I’m going to go down this road.”

FAW: For Eszterhas that road meant, with his entire family, starting to attend church weekly, also reading and studying widely about God and theology. Still, he found himself unsure, tentative, even wary until one Sunday when his former priest, Father Bob Stec, approached him after a service. 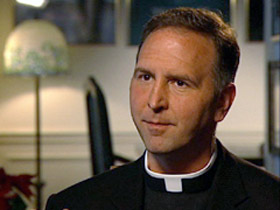 Father BOB STEC (Pastor, St. Ambrose Catholic Church, Brunswick, OH): I was literally just drawn to stop and simply share with him a simple phrase: “Joe, the best is yet to come”— with a message of hope, a message of assurance that it was going to be OK. It was just as if God said, “Joe needs to hear these words today.”

FAW: Now, devoted to his wife and four young sons and pronounced cured of cancer by his doctors, Joe Eszterhas says life has never been better.

Ms. ESZTERHAS: I think he’s more careful. He’s more Christian. He’s more—less cynical and more willing to believe the goodness in people than he is the darkness. I always tell him, “You’ve been co-opted by God, and now you’re working for him, because you used to dance with the devil.”

FAW: The question you would ask yourself is, then, why do I deserve to be singled out like this?

Mr. ESZTERHAS: I don’t. I don’t. I don’t know why God has blessed me and graced me the way God has. In terms of my own view of my life, you know, it’s something miraculous. I thank God for gracing me. I always will. But in my own mind I don’t deserve it.

FAW: And it is that sense of mystery, even wonder, which he conveys at public readings of the book he subtitles “A Memoir of Faith.”

Mr. ESZTERHAS: This is how I found God, or how God found me. 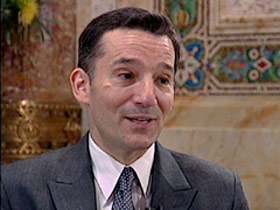 FAW: Recently Eszterhas has completed two screenplays, each one a thriller, but neither focusing on the perverse or the tormented.

FAW: You can’t write “blood and hair on the walls” with God in your heart?

FAW: Walking with his wife, or alone, three times every day Joe Eszterhas prays — mostly what he calls “thank you” prayers.

Rabbi WOLPE: What I tell people to pray for who are in trouble is closeness, is to not be alone; is to feel that God is with you. That prayer — that’s a powerful prayer. That’s a real prayer, and that’s a prayer I believe that gets answered.

FAW: And seven years after being what he calls God-struck, Joe Eszterhas, a lifelong skeptic, has no doubts that his prayers have been heard.

Mr. ESZTERHAS: I think questioning and doubt are good, and I think they build faith, in my own particular case. Seven years down the line I can say to you that my life has been transformed, and I find a sense of solace and strength that simply wasn’t in my life before.

FAW: Joe Eszterhas then, born anew — from Malibu to Ohio; Jack Daniels to Sprite; Sharon Stone to Jesus. From darkness into light.

For Religion & Ethics NewsWeekly, this is Bob Faw in Chagrin Falls, Ohio.