LUCKY SEVERSON, correspondent: He was to the United Kingdom what John Kennedy was to many in the United States: a dashing, young, urbane leader who embodied hope and change and who could put words together like no other politician of his time.

Prime Minister Tony Blair speaking in Parliament: And I may say if we take the whole period of this government, we have spent far more on our national health service than the Liberal Democrats ever asked us to.

HUGH O’SHAUGHNESSY (Author): He is a master of rhetoric and the spoken word, and he uses that for his own very prosperous interests. 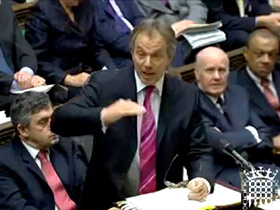 SEVERSON: When Blair left office five years ago, after serving longer than any other Labor prime minister, he was almost as out of favor as he had been popular when he was elected, largely because of the Iraq war. But his name could open doors and pocketbooks around the world—and has.

Blair moved from Number 10 Downing Street to this mansion in central London, where John Adams once resided as U.S. ambassador. Now this place doesn’t have enough space to house Blair’s multiple endeavors and charities. But none seems more important to Blair than the Tony Blair Faith Foundation.

His business ventures and philanthropy range from consulting with developing countries about how to improve systems of government to programs designed to get more young people involved in sports. But Blair appears especially energized by what he calls his “counter-attack” against religious radicalism.

TONY BLAIR: The big issue of our time actually is this, is trying to deal with this extremism based on a perversion of religion and how you get peaceful coexistence between people of different faiths and cultures.

SEVERSON: How do you? 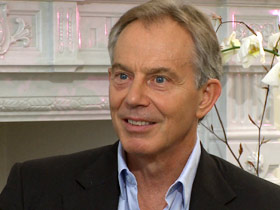 BLAIR: Well, I think by establishing platforms of understanding between people of different faiths and cultures so that they learn more about each other and through knowledge I think, comes the possibility of peaceful coexistence. I think where there is ignorance there’s usually fear, and where there’s fear there could be conflict.

SEVERSON: Blair serves as the international community’s envoy to the Middle East, a place divided by, among other things, religious extremism.

SEVERSON: The Faith Foundation in central London is fairly buzzing with young do-gooders out to save the world. One program they’re coordinating here is called Face-to-Faith. It’s now in 400 schools around the globe, connecting high school kids of different faiths by video conferencing. Face-to-Faith is now in 20 countries, including the U.S. 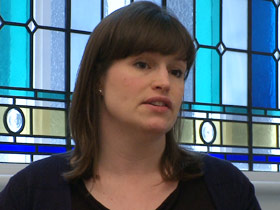 RUTH TURNER (CEO of the Tony Blair Faith Foundation): Some of our schools in Utah have had incredibly meaningful encounters talking to young people, for example, in San Francisco, and even within the same country there’s such a diverse set of views about religion.

SEVERSON: Blair has a connection with the poverty stricken nation of Sierra Leone dating back over a decade to the horrible bloodshed of that country’s civil war. He sent in British troops who were successful in quelling the violence but not ending the poverty, the misery, or the death rate from the plague of malaria.

Dr. Josephine Muhairwe is a team leader for another branch of the Tony Blair Faith Foundation operating in third world countries like Sierra Leone. 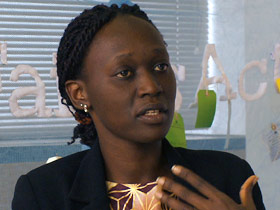 DR. JOSEPHINE MUHAIRWE: Every third child who dies dies of malaria, and for every four adults who are admitted one of them is admitted because of malaria.

TURNER: So we decided to put together a program that could literally save lives so that religion was saving lives rather than taking them. We train imams and pastors and priests. They give sermons on Friday or Sunday to their congregations, they pick key people from their congregations, we train them, they train others, so it’s a cascade training program, and these multifaith teams of Muslims and Christians go door-to-door in their local communities teaching the families as to how they can protect their children from malaria.

SEVERSON: Sierra Leone has a population of about eight million with only about a hundred doctors to treat them all. But many thousands could be saved with something as simple as a malaria retardant net to cover their beds at night.

It takes more than just specialized nets to beat malaria. It’s education in their proper use and other basic health measures like getting rid of stagnant water. That education now begins with pastors and imams. To back up their message, the Blair teams rely on passages from the Quran and the Bible. 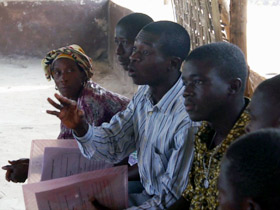 DR. MUHAIRWE: Over 95 percent of people in Sierra Leone are affiliated with either church or mosque. So the networks are wide and they are people of authority within their community, so the people listen to them, so that in itself, the model in itself is quite sustainable.

SEVERSON: Blair says so far the program has reached over 800,000 people in Sierra Leone.

BLAIR: This is not just about promoting action on the anti-malaria front. It’s also about trying to give a sense of faith as something that motivates people to acts of compassion rather than acts of conflict.

SEVERSON: Blair raises money for his foundations through fundraisers like this event in New York. It was organized by Blair team members who are Jewish and Christian. In this case they’re working with Sikhs as well in support of a Sikh-based project in Africa. But most foundation funds come from direct contributions small and large and from himself. He collects huge fees as a consultant to corporations and to countries and can command $200,000 for a speech. Blair’s name has cache, although perhaps not what he imaged as a guitar-playing student who modeled himself after Mick Jagger. 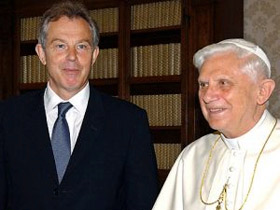 As prime minister his duties included participating in the appointment of Anglican bishops and archbishops. Six months after he left office, Blair converted to Catholicism, his wife’s lifelong religion. He says during his 10 years in office, he prayed about decisions and found solace in church.

(to Tony Blair): I’ve always been fascinated by yours and President Bush’s relationship, and I’ve always had the impression that faith had a lot to do with it, that the two of you were both men of faith, and that that in many ways drove you in your decisions.

BLAIR: We are both people of faith. But your faith can give strength when you’re taking a very difficult decision to try and do what you think is right. In that sense it can be of assistance to you. But it can’t tell you what is right, unfortunately.

SEVERSON: Did you ever talk about your faith, or did you ever pray together when you were making these decisions? 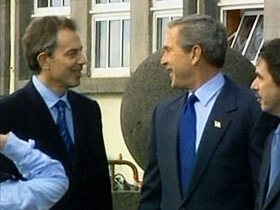 BLAIR: No. No, we didn’t. I mean, we talked about faith more generally, just as two people who know each other well, but no, not in relation to the decisions.

SEVERSON: Unfortunately for the former prime minister, many in his own country would not say the same of him. It’s been almost ten years since the Iraq invasion, and still there are newspaper stories with negative headlines about Blair’s role in the Iraq war.

O’SHAUGHNESSY: I will never forget what he’s done, and you would have to hold me over hot coals several times before you get me to vote for him again. 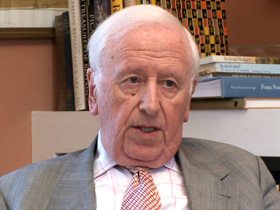 SEVERSON: Hugh O’Shaughnessy is a noted British author on developing-world issues who, like many, felt betrayed when Blair led the country into war.

O’SHAUGHNESSY: People still keep in their minds the way he treated public opinion. He brushed public opinion aside and launched into this illegal, cruel and lawless war.

SEVERSON: Blair continues to believe that history will vindicate him on Iraq and is convinced that his Faith Foundation will help calm a troubled world.

BLAIR: It’s not political ideology that‘s going to disrupt us, but it could well be religious or cultural ideology. And that’s why the concept of people across the faiths working together is so vital and so fundamental to a peaceful and successful twenty-first century.

SEVERSON: And that’s what you mean by religious “counter-attack”?

SEVERSON: Whatever his critics say of him, the former prime minister hopes his legacy overall will be that he contributed to world peace, not war.