BOB FAW, correspondent: With a few deft strokes—one line here, another there—the figures almost magically, come to life: a dog, Earl, or a cat, Mooch, appearing in the comic strip Mutts since 1994 and now syndicated in more than 700 newspapers in 20 countries. Since he could hold a crayon, Patrick McDonnell has been drawing cartoons and so much more. Every morning McDonnell is up around 5:30 with his cat MeeMow, and just before he sits down to create, he reads something spiritual.

PATRICK MCDONNELL: It reminds me what is important, and especially in doing the comic strip. I try to be funny and everything, but I always try to think of a higher purpose: how I can serve the world a little bit with my comics? Cartoons help you slow down, which is a big part of the message—to slow down.

FAW: The world of all those characters mirrors his own world in Edison, New Jersey, one acre of tranquility where deer often graze and a cat sleeps on a nearby window sill—reminders, says McDonnell, of this stillness all around and that true happiness is found in simple things. 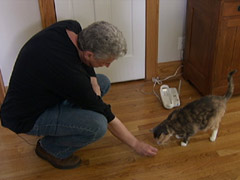 MCDONNELL: You know, our cat is just purring and sleeping in the sunlight. I think it’s finding that, you know, life is stillness. When we are with our cat and dog we kind of let go our troubles and ourselves and just become like them, which is like being happy in the present.

FAW: For 19 years, McDonnell observed those moments of stillness, that celebration of life with his Jack Russell terrier, Earl, the inspiration for Mutts. Now he tries to do the same with his new dog, Amelie.

MCDONNELL: When I play ball with my dog, every once in a while I will throw the ball horrible, and I will think if I was with a person and I threw the ball horrible, they’d probably say, “Well, come on.” You know, the dog doesn’t care. He just goes after the ball and is happy to come back. That’s a big lesson to learn.

FAW: It’s the simplest, truest things, he says, which we could learn from animals if only we would let them be our “guardians of being.”

MCDONNELL: I think cats and dogs are in the moment. You know, I think that they give us that gift. I think if you have a cat on your lap that’s purring, it’s hard to think about all the troubles in the world and your own life and really you can just relax and let go and be in the now.

FAW: It’s a mindset which infuses McDonnell’s comic strips and his books, one he recently did with the spiritual teacher and best-selling author Eckhart Tolle. 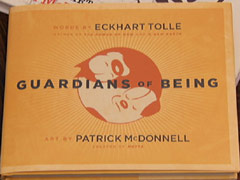 MCDONNELL: Like millions of other people, I was immediately taken with his work. He really gets to the basics. With a cartoonist you only have three panels. You have to get to the point, and I felt like he really got to the core of, you know, spirituality—spirituality and just being in the present moment. So, you know, he really influenced my work and influenced my life.

FAW: Patrick saw a photo of Tolle with his dog, Maya, and decided to contact him about collaborating on a book.

MCDONNELL: In Eckhart’s work he talks a lot about nature bringing us to stillness. You know, Mutts is about stopping and smelling the roses and how our dog and cat can help us do that, so I mean I felt an instant connection with his work. My wife and I went through a lot of his recordings and his books, and anytime he mentioned a dog or a cat we took out that little quote, and we paired them up best we could with some of my comics.

FAW: For example, when Tolle wrote “live in the now”…

MCDONNELL: I had Earl and Mooch talking about trying to live in the now and made a little, you know, gag out of it.

FAW: To remind you that?

MCDONNELL: That we should live in the now, yeah.

FAW: Or when Tolle wrote that he’s met several Zen masters, and they all happened to be cats. 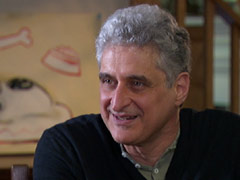 MCDONNELL: I did have a strip where Mooch is sitting on his little bed and purring and meditating away and just kind of disappears and all that’s left is the purr.

FAW: In whatever McDonnell draws, wisdom is much the same. Take his picture book “Just Like Heaven,” where Mooch falls asleep and thinks he died and went to heaven.

MCDONNELL: He goes around and sees all the things that he’s lived with his whole life, but he sort of sees them through new eyes now because, wow, this is heaven, so you know, I think the point of the book is probably back to the stillness.

FAW: Living in the present is where heaven is?

MCDONNELL: That was the message of that book, yeah.

FAW: The spiritualism of Tolle and cartoon genius of McDonnell can be distilled in just three—and sometimes even one—small panel. 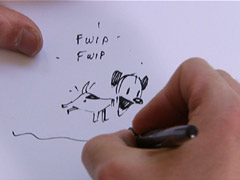 MCDONNELL: To me that’s the magic of it. You can say so much in so little.

FAW: Captured recently, too, in this public service announcement which McDonnell helped create for the Humane Society of the United States, where he sits on the board.

Public Service Announcement: I’m afraid to open my eyes. I’m afraid yesterday was all a dream and I’ll wake up and still be in the shelter.

FAW: Whether in an animated version, the so-called funny papers, or even in hardback, there is something in McDonnell’s simple drawings which deals with what matters most.

MCDONNELL: I mean, it’s definitely what’s underneath the strip—like Peanuts. I feel Peanuts had the same spirituality, but it, you know, wasn’t hitting you over the head with it.

FAW: These are your words now: “Spirituality is integral to both my life and my work.”

MCDONNELL: I think that’s why we’re here and the most important thing. When you sit at the drawing table it is a meditation, yeah, and a prayer, a little prayer when you do these little comics. They’re like little prayers to the universe.

FAW: So given all that you don’t feel you need to belong to a church, you don’t need a set of doctrines?

FAW: Finding in the life around him, which McDonnell tries to put in comic form, what Eckhart Tolle calls “a spark of the divine.”

MCDONNELL: If we just saw all life as one and, you know, and all beings as, you know, a piece of—a spark of the divine, I think all the problems would go away. Our mind just fills us with problems and things to constantly nibble at and work on. In the meantime, there’s just this peaceful stillness all around us we’re not paying attention to.

FAW: Which Patrick McDonnell is trying to change through comics—his “little prayers to the universe” reminding us to slow down and live better.

For Religion & Ethics NewsWeekly, this is Bob Faw in Edison, New Jersey.