AIDA REYES: We always are looking for a scapegoat in regards to what the budget crisis is.

LUCKY SEVERSON, correspondent: Aida Reyes has a master’s degree but volunteers all her time for a low-income parental support program called SPIN, enjoying this church-sponsored picnic in a San Diego park.

REYES: And who else is the easiest scapegoat than the poor people, the people who’ve always is never heard.

SEVERSON: California has been hit hard by the ailing economy. Over a million jobs have been lost since 2007. Even San Diego, advertised as America’s finest city, has seen the numbers of those living in poverty increase to over 300,000. Joni Halpern is a lawyer who founded SPIN.

SEVERSON: Even as welfare rolls are increasing, San Diego, like local governments everywhere, has been forced to cut programs for those in need, like those at this picnic, programs like child welfare. Advocates for the poor say it is even more difficult in San Diego because of the county’s unusual and controversial program created to police welfare fraud. It’s called Project 100 Percent, and it’s extremely unusual because it stipulates that a fraud investigator will visit unannounced anyone applying for welfare or cash assistance. Critics say it treats those in need, like some of the people here, as criminals. County officials say it’s an ethical way to save taxpayers money. 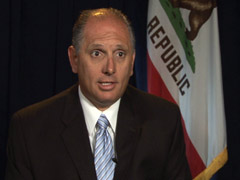 HALEY: Project 100 Percent provides an integrity component to the public aid that goes out to those people in need, and without that integrity program then there is no way to insure that the monies go out to the people that are actually eligible, deserving, and actually have the need.

REYES: It’s terrible. I think it’s a way of criminalizing poverty, and it is a way of making people feel ashamed of asking for help.

SEVERSON: Maria Orozco, who now works full time to help those applying for aid, says a few years ago she needed help. When she applied for welfare the fraud investigator came to her house.

(speaking to Maria Orozco): It was a pretty degrading experience, was it?

MARIA OROZCO: Yes, because I mean my dirty clothes, you know, your purse, you know. What if you have something not to be shown or something?

HALEY: We do not set up appointments, we just show up. And we just make sure that all the facts that they have presented to their case worker are correct. And if there are any allegations of maybe the absent parent’s in the home or one of the children actually doesn’t live at the home, then we can ask questions about that stuff. So it’s not really intrusive. 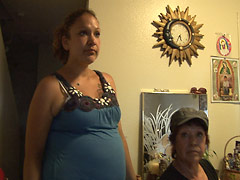 LILIANA: This is Jasmin’s, my sister’s bed and her space over here. My mom and my nephew Aiden sleep in this bed.

SEVERSON: Liliana lives in this tiny two-bedroom apartment with her mom, Yolanda, her sister, Jasmin, and their two children.

LILIANA: If we have maybe a t-shirt that might be a man’s t-shirt but we wear it, they think that we have a man living here, and since they’re not on the application, then they pretend you know like we’re lying or something. I don’t know what they look for.

SEVERSON: Bill Oswald is an associate professor at Springfield College’s School of Human Services in San Diego and an outspoken critic of Project 100 Percent.

BILL OSWALD: And any inconsistency they might find there, and I could fill this time with stories of inconsistencies, like your application says two adults but there’s three adult tooth brushes here, that’s an inconsistency so the investigator checks that off, and then when it goes back to Health and Human Services they say, “Oh, potential fraud,” and they deny you benefits.

HALEY: It’s just another piece of information that we collect. It doesn’t mean that they are going to be denied. We have run into cases where the absent parent was reported to be in another state, for instance, and we show up, and they’re there at the apartment, and they are actually working somewhere, and there is money coming in that wasn’t reported. So that is what we are out there for, just to verify the facts. 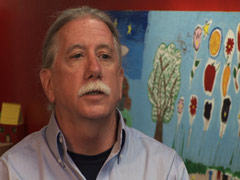 SEVERSON: County officials say their efforts have saved taxpayers millions of dollars, that they have prevented or detected fraud in nearly one out of four welfare applications. But a state audit report earlier this year says that number is not verifiable. Bill Oswald says Project 100 Percent has actually prevented worthy recipients from receiving aid.

OSWALD: For us it’s not the issue that you’re checking for fraud. We think that’s a reasonable thing to do, because you got to protect the public dollar. It’s when you create a program that is, makes it difficult to get the benefit and then doesn’t demonstrate any benefit to the county or the state or the taxpayer. So we’re paying for a program that no one can prove has any impact.

HALEY: If we did not have Project P-100 or the public assistance fraud division or our efforts, then fraud would probably go through the roof, especially with the economy now and the identity theft that is going on—things like that.

SEVERSON: Critics say county officials appear to be more focused on fraud than hunger, that they neglected to apply for millions of dollars in temporary assistance for needy families and their record of food stamp distribution is one of the worst. Low-income residents also complain that San Diego has been stingy with food stamps.

HILDA CHAN: One woman that helped out last Friday applied, waited, waited, waited and finally got a notice in the mail, the notice of action, they’re called, saying you’re denied because you do not want food stamps. Anything under the sun—it’s just unbelievable.

SEVERSON: Hilda Chan is a law student at Berkeley and a SPIN volunteer who helps parents needing food stamps maneuver through the welfare bureaucracy. 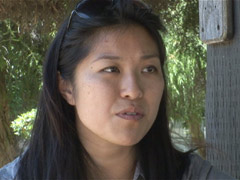 CHAN: We are the lowest metropolitan area in the nation for five years straight for food stamp participation. We have about a third of people who are eligible, families and individuals who are poor enough to qualify for food stamps. Out of all of them in San Diego only a third of them are getting them.

SEVERSON: She says many people think that illegal or undocumented immigrants clog welfare rolls and then receive public benefits.

CHAN: You can’t get public benefits if you are undocumented.

OSWALD: The assumption is that they are lazy people. They are people with no real work values. I mean for a lot of times we talk about the culture of poverty, which says people who are poor are people who can’t delay gratification. You’re not motivated to do anything in the long run, you’re promiscuous, and that’s generally our image of people who are in poverty, and it’s been that way for a very long time.

SEVERSON: Oswald doesn’t deny that there are cheaters but says he thinks that most people, like Lilana’s mother, would rather work than take a government handout.

LILANA: My mom is saying that another income we have is that she goes around like to the park and around the blocks. She collects cans to recycle. To wake up at four in the morning and walk around the streets is really strong of her. 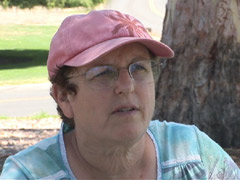 SEVERSON: John Haley says his investigators are doing what the taxpayers want them to do.

HALEY: You know, as someone who is contributing to this as a tax payer, wouldn’t you want some kind of assurances that the monies that you’re paying and contributing are going to the people that actually need it? We’ve got to make sure it goes to the right people, and that’s the way I look at it.

OSWALD: Poverty is an economic condition, not a moral issue. People are not poor because they have weak characters. They’re poor for lots of different reasons, but in my experience they’re pretty the hardest working people I know.

SEVERSON: For the moms, dads, and kids at this SPIN homework tutoring section, there is good news: the Board of Supervisors has finally agreed to take a closer look at Project 100 Percent. The bad news is not certain, but the state assembly is considering an emergency budget that would cut state welfare benefits even deeper. For Religion & Ethics NewsWeekly I’m Lucky Severson in San Diego.