BOB FAW, correspondent: For the women of the Magdalene community, now mornings begin quietly, with prayer.

WOMEN PRAYING: God grant me the serenity to accept the things I cannot change.

FAW: With meditation and expressions of gratitude.

WOMAN: Today I don’t feel alone. I know God has got me right where he wants me.

FAW: It is a long way from the violence and addiction they have known. Tara Adcock, once in and out of prisons, started that life on the streets of Nashville at 17. 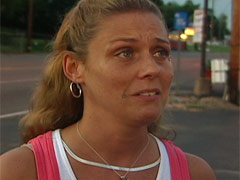 TARA ADCOCK: My pimp—I was just like his everything. He fed me with crack, bought me new clothes. I didn’t know nothing about none of this, and then just one night he said come on I’m taking you and another girl, and she’s going to show you the ropes. So he dropped me off right here. I’ve been dragged up and down this road. I was raped. I hated myself.

REGINA MULLIS: I never thought that I would be in prostitution and an addict. I did it because this man offered me $300 to be an escort at a dinner ball, and he was a doctor, and he sent for me in a limousine, and I was like, if this is what it’s about I can do this. But throughout the years quickly it went from being a $300 escort to, you know, just accepting $5.

FAW: Regina has a job now after going back to school and reclaiming her children. She survived, along with Tara, with the help of a remarkable program called Magdalene started by a somewhat unconventional Episcopal priest, Becca Stevens—a free spirit who not only preaches barefoot at the Vanderbilt University chapel but who turned a vision into reality. 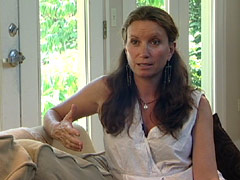 REV. BECCA STEVENS: I wanted to create a space that felt like it was healing and luxurious and safe and hopeful for women, so that there would be a space to feel like you could do the work and the healing that needed to happen in your life.

FAW: What Stevens created was a nonprofit organization for female addicts and prostitutes, most who have been sexually abused, all who have been raped. By hand they create natural bath and beauty products—soaps, balms, candles—all made under the label Thistle Farms.

STEVENS: The thistle is the weed or the flower, depending on your perspective, that still grows on the streets and the alleys where the women walk. It has the deepest taproot of any plant, and it can push through two, three inches of concrete. It is a great reminder that all of us, with our prickly outer selves, have this beautiful, deep, rich center that’s a gift from God.

FAW: Here they not only pick thistles but crush, moisten, soften and then turn the thistle into paper. With the products and through donations which Thistle Farms has raised, Stevens has opened a residential community of six homes where women off the streets are given rooms and food for two years at no charge. Stevens takes neither federal nor state money.

STEVENS: It’s great because it keeps you pretty honest, and it keeps you working pretty hard. You know, give us this day our daily bread. Be thankful for this day and for all the gifts. I mean people give to us because they’re grateful for all they’ve been given.

FAW: Here residents not only get shelter but medical help, counseling, and spiritual guidance. 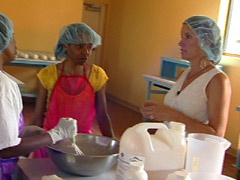 STEVENS (speaking to woman): Where is God in this recovery for you?

FAW: And here faith is a component of healing, but no doctrines are taught. Nothing is force-fed or imposed. There is a very spiritual, loving foundation, Magdalene graduate Katie Lynn says, but…

KATIE LYNN: …they don’t push religion on you, so that you can make the choice of your own, because a lot of people such as myself come from a background where I was told that if anything bad I did God was going to get me.

STEVENS: I think most of the women have pretty strong feelings about what their spiritual path looks like, and I’m more interested in encouraging them to have that religious and spiritual voice, where nobody’s saying like this is what you need to believe.

FAW: For the women who come here there is no staff hovering about, no one telling them what to do. What they do get: something most of them have never gotten before.

KATIE LYNN: I felt unconditional love. They loved me for who I was, and they wanted to help me through anything, just to get better.

FAW: At first that environment, that acceptance seemed unreal to Tara and Shelia McClain. When she was very small, Shelia was repeatedly abused for years. Leaving home at 14, getting addicted, at 18 she turned to prostitution. Tara and Shelia bonded when they were working the streets.

ADCOCK: Like we’d go do a trick, a date together, or we’d go to an apartment.

SHELIA MCCLAIN: We were treacherous, okay?

ADCOCK: I would rob and she would… 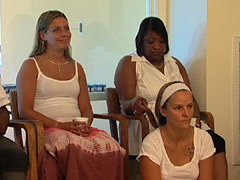 MCCLAIN: I would flat-back.

ADCOCK: She would flat-back.

MCCLAIN: We were treacherous out there together.

FAW: So on a good day you could make how much?

FAW: They both hated it, they say, but neither could break loose.

MCCLAIN: After I turned the trick to get a room, I’d feel the degradation hit and then I’d have to buy dope to medicate how I was feeling about just dealing with the trick, and it’s a vicious cycle, you know.

FAW: Ready for a change, Shelia wrote to her judge from prison asking to be admitted to the Magdalene program. Two years later, she graduated with the judge by her side. She is different now: clean, owns her own house, is married with two children, and a college student. Tara, who graduates in December, has also put her drug-ridden past behind. 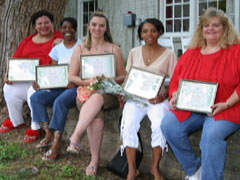 ADCOCK: There was no judgment. They just want to help you. They showed me what I can do, you know, and I believe in myself today.

FAW: Assisted on that Vanderbilt campus chapel by her Grammy-winning songwriter-husband, Marcus Hummon, the barefoot priest sees the Magdalene homes and Thistle Farms as part of her ministry.

STEVENS: I’m doing the best that I can to live out my faith as I understand it, and I’m doing it on the path that I have chosen, and I’ve chosen as an Episcopal priest to do this work.

FAW: Her ministry springs partly from sexual abuse she suffered from a deacon in her church when she was just six to eight years old.

STEVENS: I get some of the recovery issues. I see in my own abuse in my life as in some ways strangely a gift—that I learned a lot. It’s nothing I would have asked for, but it is a gift, and it’s a powerful tool. So I’m a defender of a lot of women, because I know you don’t get over that stuff. I have a tenderness for what it does and how it makes you look at the world.

FAW: Through natural products, private grants, and gifts Stevens has raised nearly $13 million, with it sending the women of Magdalene to visit women in prison. She has also helped fund a school in Ecuador and to help establish a business for women’s groups in Rwanda—abroad and at home demonstrating what she says is the same theme: 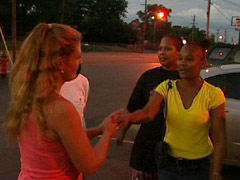 STEVENS: That love is the most powerful force for social change. That love could be powerful enough to change a life. And what I think it means now is it has changed my life, and I think I’m really different because of the gift of this work. I believe that more now than when I started out.

FAW: What happens at Thistle Farms and at Magdalene seems to be working. Seventy-two percent of the women who complete the program, says Stevens, are clean two-and-a-half years later. And while not everyone embraces the program—this streetwalker, Angie, said she just wasn’t ready when her old friends, Tara and Katrina, urged her to join— nearly 80 to 100 women are waiting to get in. For those who do graduate from what Becca Stevens has started, there is exhilaration and pride and a conviction that their lives have been transformed.

MULLIS: My gift now is to be, now that I’m breathing, is to be able to show other women a way out, and Magdalene was that way out for me.

FAW: A way out where abused women bond sharing simple daily chores, where they grow closer helping one another, where, with hands that have known hardship they now make candles which burn sweetly, where the faces change but the circle of healing grows stronger.

For Religion & Ethics NewsWeekly, this is Bob Faw in Nashville, Tennessee.