KIM LAWTON, correspondent: Joni Eareckson Tada is a woman of many talents. She’s a bestselling author, an acclaimed artist, and an internationally known advocate for people with disabilities. Paralyzed for more than 40 years, Tada is one of the longest living quadriplegics on record. She endures chronic pain, and just a few months ago she was diagnosed with breast cancer. Tada says it’s her faith that keeps her going.

JONI EARECKSON TADA: Boy, when Jesus said in this world you will have trouble, he wasn’t kidding. In this world there will be trouble. Perhaps the gift of this cancer and pain and quadriplegia is that it forces me to recognize my desperate, desperate need of God, and that is a good thing.

LAWTON: Tada was an active, athletic teenager. Then, at the age of 17, she broke her neck in a diving accident in the Chesapeake Bay. Her spinal chord was severed, and she became paralyzed from the shoulders down. She has limited arm motion but can’t use her hands or her legs. Immediately after the accident, she was angry and depressed and begged friends to help her commit suicide. Ultimately, she says she found peace when she committed her life to God.

EARECKSON TADA: God is that big, and he’s that good, and his grace is that sufficient. 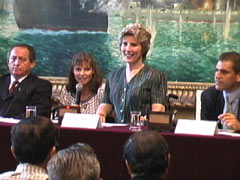 LAWTON: Tada wanted to help others with disabilities and in 1979 began a ministry called Joni and Friends, offering support to disabled people and their families.

EARECKSON TADA: Disabilities are on the rise. Autism, Alzheimer’s—there’s not a cul-de-sac in America that’s not impacted somehow with a family who has a child or an elderly parent with a disability.

LAWTON: Because of her efforts, Tada was appointed to the National Council on Disability. She worked for passage of the landmark Americans with Disabilities Act, passed in 1990, which sought to make America more accessible. But she feels more is still needed.

LAWTON: Joni and Friends provides resources to help local churches reach out to people with special needs and their families. The goal is to help disabled people find dignity and purpose in their lives. The ministry holds family retreats around the country and has begun special sessions called “Wounded Warrior Getaways” for armed service members injured in combat and their families. 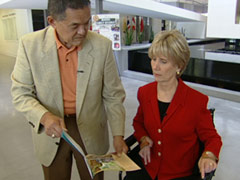 Joni’s husband, Ken, knows all too well the toll disabilities can take on a family. He and Joni married in 1982 and have become mentors for other couples living with disabilities. Now retired from teaching school, Ken helps Joni with the international component of their ministry, called Wheels for the World, which provides wheelchairs and walkers to disabled people in poor countries.

KEN TADA: To give the gift of mobility to someone who has never walked before and to watch how it not only changes that person’s life, but the whole family—that’s been huge.

LAWTON: In one ministry project, prisoners at a California penitentiary make special pediatric wheelchairs that Joni and Friends distribute around the world.

Tada herself has become a living testimony that a disability doesn’t have to be, in her words, “the end of the world.” She has told her personal story countless times in speaking engagements and through the more than 35 books that she has written, including her newest one, A Place of Healing. Her autobiography called Joni has been translated into more than 20 languages, and in 1980 Billy Graham’s Worldwide Pictures turned it into a feature film. 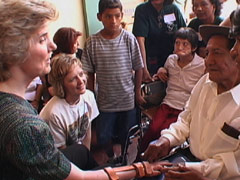 Despite the wheelchair—in fact, because of it—Tada has been all over the world, and she’s learned how to compensate for the paralysis. Tada taught herself how to draw and paint using her mouth. Music and art, she says, give her a vibrant creative and spiritual outlet.

EARECKSON TADA: Yeah, I do many things—mostly family retreats, working at Joni and Friends for others, but boy, my artwork and my music is something that comforts my own soul, that encourages my own soul. That’s a blessing. Since I’m dealing with more pain I work more now with pencil rather than brushes. Brushes are just a little too heavy. Pencils are lighter.

LAWTON: Tada is open about her struggles. Just getting out of bed in the morning is a two-hour ordeal. A series of friends come in and help get her ready for the day.

EARECKSON TADA: And there are many days, honestly, when I can hear my girlfriends come into the front door, and they’re running water for coffee in the kitchen. I know they’re going to be in my bedroom in a few minutes with a happy hello, and I just don’t have the strength to welcome them, and so while they’re still in the kitchen I’m praying oh, God, I have no strength for this day, but you do. 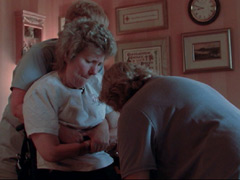 LAWTON: Tada talks often about the reality of suffering—a difficult message in what she calls America’s culture of comfort.

EARECKSON TADA: We want to erase suffering out of the dictionary. We want to eradicate it, avoid it, give it ibuprofen, institutionalize is, divorce it, surgically exorcise it, do anything but live with it.

LAWTON: Even after all these years in the wheelchair, she says some fellow evangelicals still tell her if she had more faith God would heal her.

EARECKSON TADA: But sometimes healing doesn’t come, and you’ve got to live with it, and when you do you really do learn who you are. God uses suffering. He lobs it like a hand grenade and blows to smithereens these notions we have about our self and who we think we are. Blows it to smithereens until we are left raw, naked, and we have to let suffering do its work.

LAWTON: These days it seems like there is a lot of that work. After breast cancer surgery, Tada is undergoing chemotherapy, which has siphoned off much of her trademark vitality. 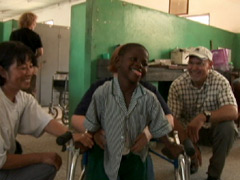 LAWTON: Her motivation for persevering, she says, is all the people she’s able to help.

EARECKSON TADA: I need a reason to get up in the morning, and my big reason is to help other families like mine, other people with disabilities, other special needs moms and dads, to encourage them and strengthen them, to help them want to face life head on.

LAWTON: She says she won’t allow herself to spiral into doubt and despair.

LAWTON: Ken Tada says it’s been hard watching his best friend go through so much.

TADA: I’ve often had several guy friends of mine who I’ve said, you know, if I ever go to war I’d want those guys in my foxhole. The first person I’d want in my foxhole is my wife.

LAWTON: He says the cancer has brought them closer to each other and to God.

TADA: Yeah, we’re depressed. If we didn’t have God to turn to, I don’t know. I mean, I certainly understand some of the other alternatives, but boy, I tell you, you know, you just kind of grab on with both hands and just hold on as tight as you can, because that’s the only hope.

LAWTON: I asked her a question she’s been asked over and over again: How can you just keep believing in a God that would let all that happen?

EARECKSON TADA: I pray a lot, and I sing a lot. I sing because I have to sing. There’s something good about talking to yourself, reminding yourself of things you believed in the light but you’re so quick to doubt in the darkness. And I’ve seen too much of the light to not choose the Lord.