BOB ABERNETHY, host: We have a profile now of a man who has spent most of his life working for better relations between Christians and Jews. He is Rabbi James Rudin, for many years until his retirement the head of interreligious affairs for the American Jewish Committee. Rudin has a new book out called “Christians and Jews, Faith to Faith.” One reason he wrote it, he says, is his fear that the cause he has served so long is losing momentum.

We met Rudin at a retreat center near his home in Florida. Once, he promoted better interreligious understanding with top US and foreign leaders. He had 11 meetings with Pope John Paul II and then with Benedict XVI. Rudin may be retired officially, but he is still busy writing, speaking, and leading interfaith meetings, this one of Catholics and Jews. 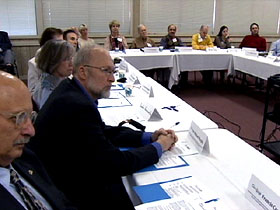 RABBI JAMES RUDIN (speaking at interfaith meeting): Is it possible to be a faithful Catholic and a faithful Jew, very deep in your soul, in your heart, and still have mutual respect and understanding for the Other, capital O, the Other who is not of our faith?

ABERNETHY: Rudin says the Nazi Holocaust of the 1930s and ’40s taught his generation what can happen when bigotry goes unchecked.

ABERNETHY: Pope John Paul II, along with many others, led the postwar attack on religious prejudice, especially on anti-Semitism. In the year 2000, John Paul prayed at the Western Wall in Jerusalem, Judaism’s holiest site. The note he left asked God’s forgiveness for all those who had caused Jews to suffer. I asked Rudin if he blames Christians for the Holocaust.

RUDIN: I don’t hold today’s Christians guilty, not at all. Most of them were born after ’45. But there is a responsibility to teach it to young Christians growing up today. In Christian Europe, in a Christian society mass murder took place of a religious community, and how did that happen?

ABERNETHY: In churches, synagogues, and schools, often with carefully prepared courses and videos, dialogues explore the issues that separate the two religions, one of them—the words “Old Testament.” 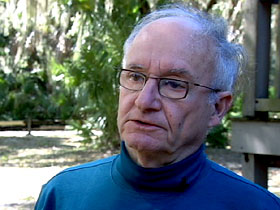 RUDIN: It’s not accurate because it puts Judaism as if it were something old-fashioned, not up to date or, as many Christians believe, has been replaced by Christianity and that the New Testament is superior to the Old Testament, and that’s my beef with it.

ABERNETHY: And what about the understanding many Christians have that the Hebrew Bible foreshadows the coming of Christ?

RUDIN: I want Christians to take the Hebrew Bible or, it’s called, the Old Testament or the Tanakh on its own terms. Do not imply that it was written six- or seven-hundred years before an event and was already predicting an event.

ABERNETHY: What then should evangelical Christians and others do about their conviction that the whole Bible is literally true—God’s word?

RUDIN: Well, that’s not the way Jews and other Christians read the Bible.

ABERNETHY: And the ancient accusation that Jews killed Christ?

RUDIN: That’s one of the most insidious and odious charges, and everybody knows, or everybody should know that Jews under Roman occupation in the land of Israel at that time had no power to execute anybody.

ABERNETHY: Another issue—Jesus’ “Great Commission” to his followers to make disciples of all nations.

RUDIN: Well, I respect that and I understand it, but Jews are already with the Father, already with God—the Covenant—and are not in need of any intermediary. 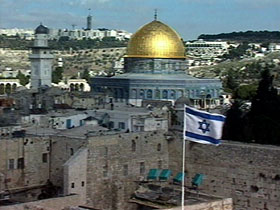 ABERNETHY: And attitudes toward Israel? I asked Rudin whether he thinks some Jews are so supportive of the state of Israel that they can’t criticize its government’s policies.

RUDIN: There are many Jews who are very unhappy with the various policies of the Israeli government and have expressed it. However, there is one thing that the overwhelming number of Jews agree—that Israel must survive as a Jewish state.

RUDIN: I’ve found after 40 years of this that Jews and Christians who really engage one another come out better Christians and better Jews.

ABERNETHY: Rudin preaches a theology that accepts the validity of all religions, all different approaches to the transcendent.

RUDIN: I really believe that God’s plan for the human family is that there are many, many paths to God, and there’s not just one path and one way and one truth, and that’s the hardest thing for Christians and Jews to accept. They can accept neighbors, they can accept working together, marrying one another, they can do all kinds of things, but when push comes to shove they’ll say “my faith is the truth,.” But when you say “my faith is the truth” you are excluding 98 percent of the rest of the world. 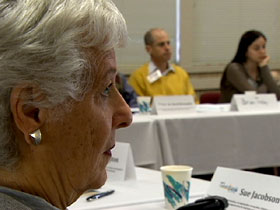 ABERNETHY: The interfaith group Rudin spoke to was the board of directors of the Center for Christian-Jewish Studies at Florida’s Saint Leo University. Some of the members spoke of the progress they have seen:

INTERFAITH MEETING PARTICIPANT: I go back to my own childhood, where my schoolmates would call me a dirty Jew, and now I have a beloved Catholic son-in-law, and we’re sitting in this group. It’s like day and night.

RUDIN: That’s in one generation

INTERFAITH MEETING PARTICIPANT: In one generation—well, a long one.

ABERNETHY: Others emphasized their concern for the future.

INTERFAITH MEETING PARTICIPANT: My fear is that we have peaked. Now if I’m wrong in this tell me, because a lot of the folks that are engaged in our work here are not necessarily going to be around the next 10 years. The challenge for us is how to bring folks who aren’t 60 years old into this game, right?

ABERNETHY: Rabbi Rudin, too, sees work left to do and not enough younger people interested in doing it.

RUDIN: I think the initial enthusiasm, the first flush of excitement—gee, Christians and Jews meeting together in America and dialogue or in Israel or Europe either—that’s over. And you have a whole new generation of Jews and Christians for whom all this either seems old-fashioned or unnecessary or the job has been done. There’s nothing more to do. Maybe they think we’ve succeeded, but we haven’t.

ABERNETHY: If younger generations feel better relations between Christians and Jews are no longer a top priority, surely one of the reasons is the great improvement in those relations that Rabbi Rudin helped bring about.