BOB ABERNETHY, host: Pro-union protests in Wisconsin spread to other states this week as legislatures consider measures that would limit pension obligations and collective bargaining. The demonstrations have sparked a national debate over budget responsibilities and justice for workers. Many in the religious community are actively supporting the labor movement, although some people of faith argue that fiscal responsibility is also a moral priority.

We have analysis from Kim Lawton, managing editor of this program, and Kevin Eckstrom, editor of Religion News Service. Kevin, welcome to you both, a lot of religious involvement in Wisconsin and elsewhere.

KEVIN ECKSTROM (Editor, Religion News Service): Yeah, you’ve really seen, I think, in the last couple weeks a revival of this message from religious groups that we haven’t heard in a long time, this sort of solidarity with workers and with union rights. You know, with all the talk in recent years about abortion and gay marriage and health care even, we haven’t heard much about unions from many churches, especially the Catholic Church, which has been a longtime supporter of organized labor. 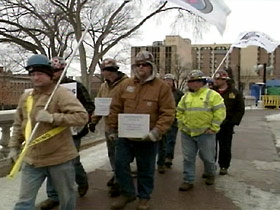 ECKSTROM: Right, and that’s really come back this week.

KIM LAWTON (Managing Editor, Religion & Ethics NewsWeekly): And I think that’s surprised a lot of people, because the church, the Catholic Church, had been perceived as really focusing more on issues like abortion, and so to see them come out and take a stand to say, yeah, we understand there are tough budget decisions, but workers’ rights and human dignity and the common good of all, including workers, is important, and the ability to organize is also a moral value, and that’s what the bishops were saying.

ABERNETHY: But it’s been more than the Catholics, of course. It’s been lots of denominations represented in Madison.

ECKSTROM: That’s right. You had a lot of rabbis actually out marching with the workers in Madison. You had Lutherans, Episcopalians, Presbyterians, the whole gamut. One of the leaders in Wisconsin from the United Church of Christ, I think, put it pretty well when he said we all understand that we’re going to have to make tough budget cuts. The question is how those cuts are going to be made and whether the people who are affected, and in this case public employees, are going to have a seat at the table. That’s really what they’re fighting about. 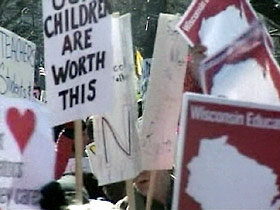 LAWTON: Well, and that’s become a growing issue especially for religious conservatives—talking about these deficits as a moral issue. The Bible says don’t be in debt, and therefore that’s how they’re arguing. You haven’t seen, I haven’t seen a lot of religious conservatives out there right now going against the unions per se, but they are very much focusing their arguments on this, you know—the morality of the budget.

ABERNETHY: How representative do you think the people are who are protesting, both sides, of their rank-and-file?

ECKSTROM: Well, I think, you know, you always have to be careful about a division between the hierarchy—you know, the bishops and the archbishops who come out and make these statements—and the folks in the pews, and I have friends in Wisconsin who are no friends of the labor unions, but yet their bishop is out speaking in favor. So whenever you have public statements like this you have to be—you have to remember that what is said in the pulpit doesn’t always necessarily flow down to the pews.

LAWTON: And it’s interesting, because I think there are some politics involved in here as well.

LAWTON: And so—and the unions do have a certain political reputation, and so for some people in the pews they’re more used to that, and so this talking about it as a moral issue is a new thing. You know, I was also struck by something else that’s been going in all of these—the rallies, and there’s talk of nonviolent civil disobedience and organizing. A lot of these faith-based people who are doing this are really, they’re specifically calling back to the legacy of Dr. King in the civil rights movement and this notion of the faith groups, and including a lot of Jewish leaders, really providing a pastoral underpinning for this protest, and it’s interesting they are drawing a lot of parallels. Somebody said “Wisconsin’s our Selma,” and so that’s a development I’m watching.

ECKSTROM: One of the chants they’ve been saying is, “This is what religion looks like,” as they’re out there at the State Capitol chanting and protesting. That, to them, this is faith-based action.

ABERNETHY: Kevin, many thanks, and Kim.