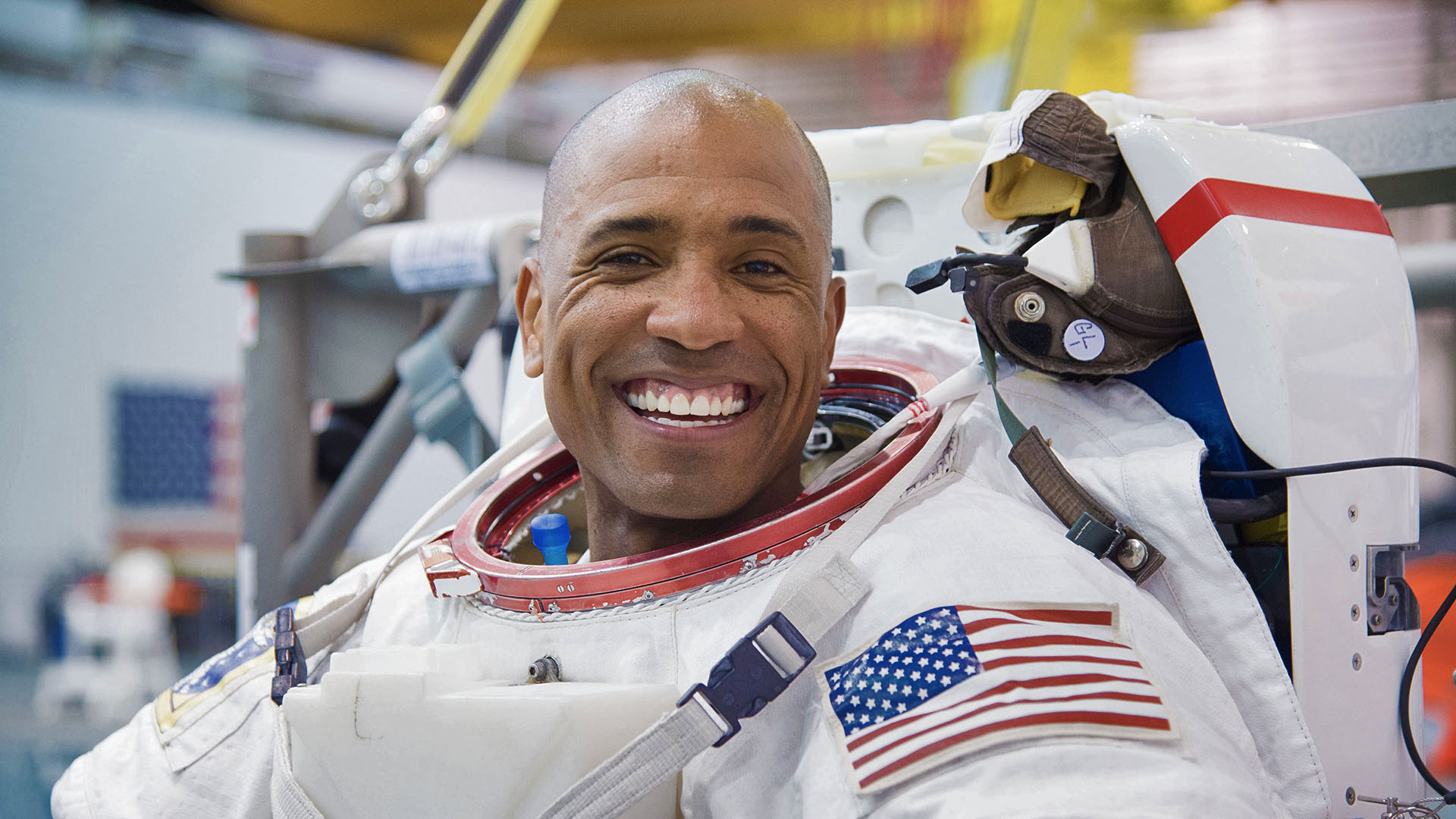 Born in Pomona, California.  Married to the former Dionna Odom of Berkeley, California.  They have four children.  His mother lives in southern California, and his father and stepmother live in Prosper, Texas.

Following commissioning, Glover began preflight training in Pensacola, Florida, and completed his advanced flight training in Kingsville, Texas, earning his wings of gold on December 14, 2001.  In 2002, Glover reported to the Marine Fleet Replacement Squadron, VMFAT-101, in Miramar, California.  In 2003, after completing the F/A-18C syllabus, he was assigned to the Blue Blasters of Strike Fighter Squadron VFA-34 in Oceana, Virginia.  With the Blue Blasters, he completed the final deployment of the USS John F. Kennedy (CV-67) in support of Operation Iraqi Freedom.  While deployed, he completed a Space Systems Certificate from the Naval Postgraduate School (NPS).  Glover was then selected as the United States Navy’s exchange pilot to attend the Air Force Test Pilot School.  During the one-year experimental test piloting course, he flew more than 30 aircraft in the U.S. and Italy.  On June 9, 2007, he was designated a test pilot.  Glover then served as a test pilot with the Dust Devils of Air Test and Evaluation Squadron VX-31 in China Lake, California, testing various weapons systems on the F/A - 18 Hornet, Super Hornet and EA-18G Growler.  In his off-duty hours, he earned a Master of Science degree in Systems Engineering via NPS in Monterey, California.  In 2009, Glover received orders to the Air Command and Staff College at Maxwell Air Force Base, Alabama.  Following graduation, Glover reported to the Dambusters of Strike Fighter Squadron VFA-195, in Atsugi, Japan, where he served as a Department Head.  With the Dambusters, he deployed three times to various locations in the Pacific Ocean.  In 2012, Glover was selected for the Legislative Fellowship.  He reported to the Office of Legislative Affairs in Washington, D.C., and was assigned to the office of a U.S. Senator.  While in Washington D.C., he completed a Certificate in Legislative Studies at Georgetown University.  Glover was a Legislative Fellow in the U.S. Senate when selected as an astronaut candidate.

Glover was selected in 2013 as one of eight members of the 21st NASA astronaut class.  In 2015, he completed Astronaut Candidate Training, including scientific and technical briefings, intensive instruction in International Space Station systems, spacewalks, robotics, physiological training, T-38 flight training and water and wilderness survival training.

Getting to a Year in Space

How Scott Kelly prepared for and was supported during his one year mission on the ISS.

Here's what the Earth looks like when you're spending a year in space.

Life On The ISS

From eating, working or spacewalking, here's what life is like during a year in space.