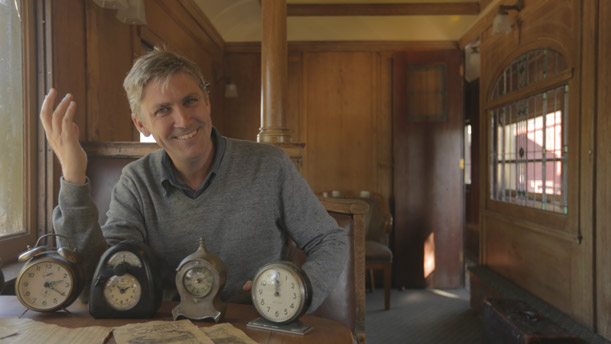 How do you schedule a phone-call across continents and countries?

It’s simple, right? The idea of coordinating schedules to chat with a loved one living on the other side of the world or arranging an international conference call meeting – you just match up the time zones and work out the best time to call.

But just 150 years ago, scheduling anything was a lot more complicated! In this clip from the 'Time' episode, Steven explains how railroad travel brought to light the need for standardized time.

So how did we get from having a country where towns set their own local times, to one with standardized time zones? We owe it to a railroad engineer whose ideas about time would set the stage for standardizing time worldwide.

William Allen was the editor of a guide to railroad timetables. He recognizes the logistical challenges of having fifty different railroad times and thousands of local times. In 1883, Allen seizes the moment and introduces the idea of using standard time zones based on where railroad lines connect.

Allen successfully persuades the railroad bosses to accept his plan, but he still has a major fight on his hands before he can make his idea a reality because the proposal of standard time is a deeply controversial idea among ordinary citizens. He doesn’t give up though and starts an enormous lobbying campaign, writing nearly 600 letters and countless circulars to mayors andcity councils to try and cajole them to sign up!

After an epic nine month battle to wrestle America’s chaos of times into a simple system, Allen finally triumphs.

The next year, Greenwich Mean Time is set up as the international meridian and the whole world is divided up into time zones.

So think about William Allen next time you make a trans-Atlantic call, travel from state to state or want to call relatives on the other side of the world – things might have been very different and a whole lot more complicated without his efforts to standardize time!