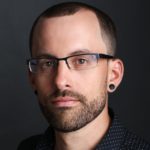 5 ways prisoners were used for profit throughout U.S. history

During the four months that reporter Shane Bauer spent undercover as a guard for Louisiana’s Winn Correctional Center, he used covert recording devices to catch eye-popping quotes from inmates and authorities, and took copious notes from inside the walls of the facility run by one of the industry’s biggest corporations.

But before that reporting became the basis of “American Prison,” a full-length book on the for-profit prison system, Bauer wrote an exposé about his experience for “Mother Jones.” At that point, he sensed there was more of the story to tell.

“I kept going further and further back until I realized I needed to start at the foundation of this country and trace the story of profit in the American prison system from there,” Bauer told the PBS NewsHour.

“American Prison” delves deep into that history, starting before the United States was even a country, with Britain’s dumping of convicts in colonial America, to the post-Civil War era, when businesses used convicts to replace slave labor, and into the 20th century, as states continued to profit from inmates.

Below, Bauer highlights a few key moments in the history of prison-as-profit in America, drawing from research he conducted for the book. 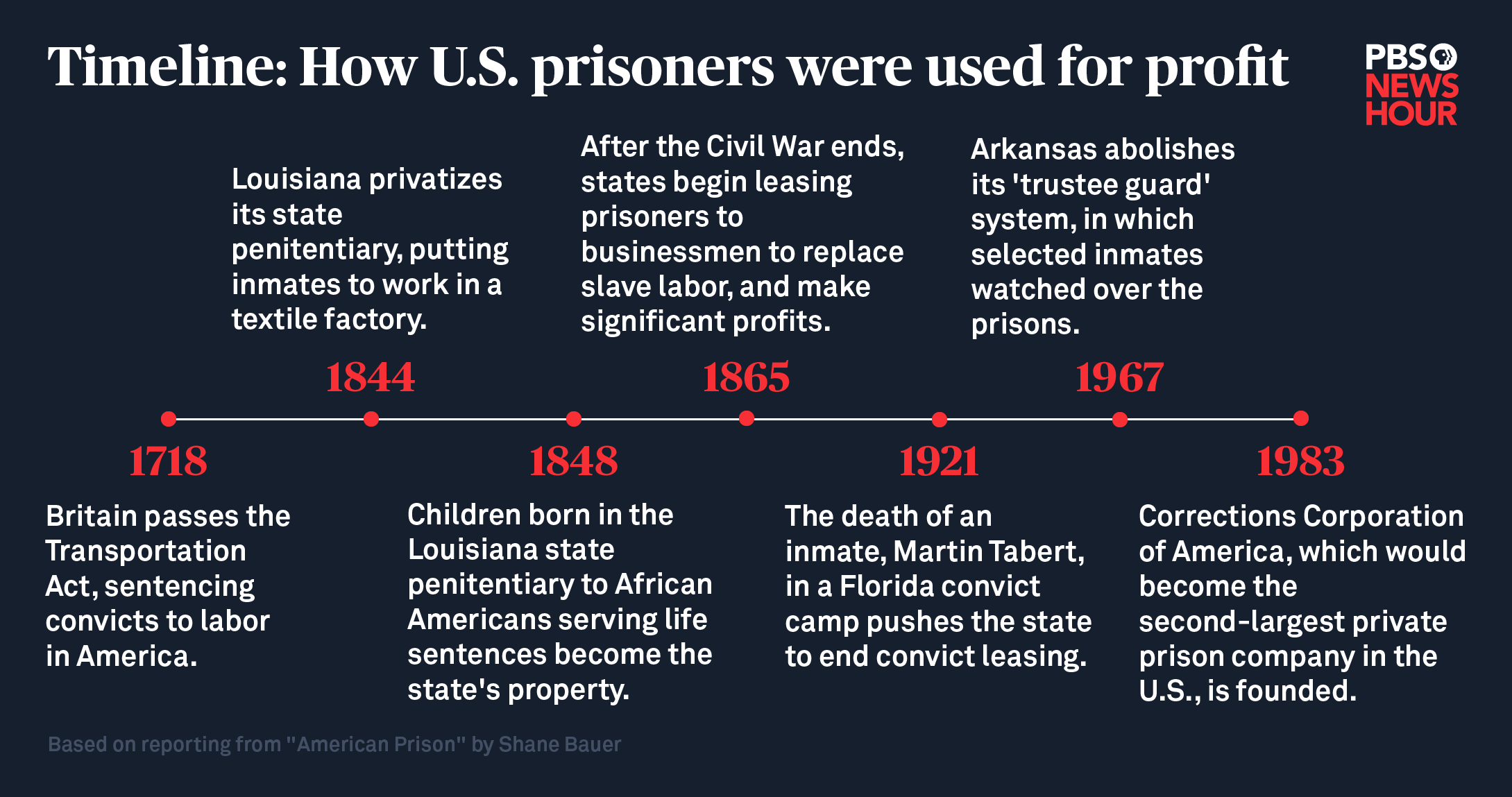 Approximately one quarter of all British immigrants to America in the 18th century were convicts.

Before the American Revolution, Britain used America as a dumping ground for its convicts. In 1718 Britain passed the Transportation Act, providing that people convicted of burglary, robbery, perjury, forgery, and theft could, at the court’s discretion, be sent to America for at least seven years rather than be hanged. The convicts were chained below ship decks and brought across the sea by merchant entrepreneurs, many of whom were experienced in the African slave trade. Just a few companies dominated the business, and they charged British authorities up to five pounds for the transport of each convict. But the fee was not enough to entice merchants to cross the Atlantic, so Parliament granted contractors “property and interest in the service” of felons for the duration of their banishment.

This meant that merchants could auction their human cargo into involuntary servitude under private masters, usually for work on tobacco plantations. Planters often preferred convicts to slaves. They were cheaper, and because they served limited terms, they didn’t have to be supported in old age. Approximately one quarter of all British immigrants to America in the 18th century were convicts.

In the early 19th century, the United States was exporting more cotton than all other nations combined. The frontier was constantly expanding, opening up more land for cotton, and it seemed impossible to lose money on real estate. New Orleans had the densest concentration of banking capital in the country, and money poured in from Northern and European investors. Then, in 1837, the bubble burst, sending the United States into its first great depression. Louisiana needed money, and the penitentiary became a target for belt-tightening.

In 1844, the state privatized the penitentiary, leading it to a company called McHatton, Pratt, & Ward. The company was responsible for the operations of the prison, including feeding and clothing inmates, and it could use inmate labor toward its own ends. The company put inmates to work from dawn till dusk in the penitentiary’s textile factory. “These men laid aside all objects of reformation,” one prisoner wrote, “and-re-instated the most cruel tyranny, to eke out the dollars and cents of human misery.” Men who couldn’t keep up with the work were beaten and whipped, sometimes to death.

Before the Civil War, most prisoners in the South were white. The punishment of enslaved African Americans was generally left up to their owners. Louisiana, however, did imprison enslaved people for “serious” crimes, generally involving acts of rebellion against the slave system. A number of these imprisoned slaves were women. Penitentiary records show a number of women imprisoned for “assaulting a white,” arson, or attempting to poison someone, most likely their enslavers.

Some of these female prisoners became pregnant, either by fellow inmates or prison officials. In 1848, state legislatures passed a law declaring that all children born in the penitentiary to African Americans serving life sentences would become property of the state. The women would raise the children inside the prison until the age of 10, at which point they would be auctioned on the courthouse steps. Many of the buyers were prison officials, including heads of the company that ran the penitentiary. The proceeds were used to fund schools for white children.

After the Civil War, the former owners of enslaved people looked for ways to continue using forced labor. With Southern economies devastated by the war, businessmen convinced states to lease them their prisoners. Convicts dug levies, laid railroad tracks, picked cotton, and mined coal for private companies and planters. The system, known as convict leasing, was profitable not only for the lessees, but for the states themselves, which typically demanded a cut of the profits. Tennessee once made 10 percent of its state budget from convict leasing.

There was simply no incentive for lessees to avoid working people to death.

In many ways, the system was more brutal than slavery. The annual convict death rates ranged from 16 to 25 percent, a mortality rate that would rival the Soviet gulags to come. In 1870 Alabama prison officials reported that more than 40 percent of their convicts had died in their mining camps. There was simply no incentive for lessees to avoid working people to death. In 1883, one Southern man told the National Conference of Charities and Corrections: “Before the war, we owned the negroes. If a man had a good negro, he could afford to take care of him: if he was sick get a doctor. He might even put gold plugs in his teeth. But these convicts: we don’t own ‘em. One dies, get another.”

5. Squeezing every dollar out of prisoners

Around the end of the 19th century, states became jealous of the profits that lessees were making from their convicts. In Texas, a former slaveholder and prison superintendent began an “experiment.” The state bought two plantations of its own to work inmates that were not fit enough to “hire out for first-class labor.” As a business venture, it was a success. In just over a decade, the state was making around $1.25 million in today’s dollars from its plantations, exceeding its income from the convict lease system. By 1928 the state of Texas would be running 12 prison plantations.

States throughout the South stopped hiring out their convicts to private businessmen and ran their own plantations, keeping all the profits. To squeeze every dollar they could from their prisoners, some states instituted a “trustee guard” system, using inmates rather than paid guards to watch over their prisons. Typically, prisoners convicted of the most brutal acts were appointed to the job because of their willingness to shoot others. If a trustee guard shot an inmate assumed to be escaping, he was granted an immediate parole. Like slave drivers before Emancipation, certain prisoners were chosen to whip inmates in the fields. Arkansas allowed the practice until 1967. Shortly after whipping was abolished, its prison plantations stopped turning a profit.