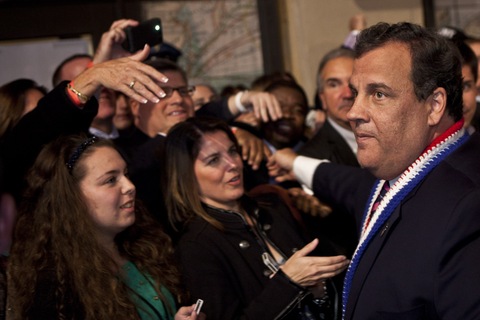 The results of two major off-year gubernatorial contests are still giving the political parties plenty of food for thought ahead of midterm elections and the 2016 race for the White House.

With Democratic Gov.-elect Terry McAuliffe forging ahead to craft his transition team in Virginia — with several Republicans at the helm — and New Jersey Gov. Chris Christie not shying away from his national ambition, Wednesday offered the parties time for reflection.

The New York Times’ Jonathan Martin and Jeremy Peters get at the internal GOP examination ahead of the next big contests.

And the Washington Post leads its front page with this story by Philip Rucker looking at how Democrats are immediately attempting to knock Christie down a peg after his resounding victory of more than 60 percent of the vote to secure a second term.

But Republicans are joining in as well. Sen. Rand Paul, R-Ky., pointedly used his perch from a Senate hearing to ask Housing and Urban Development Secretary Shaun Donovan if it was appropriate for federal aid for Superstorm Sandy to have been used on television. He didn’t name Christie, but the reference to the New Jersey governor was clear.

And Sahil Kapur of Talking Points Memo translates some of the praise Christie got from other Republicans who might be eyeing a national bid.

In Virginia, Republicans were finger-pointing about why Republican Attorney General Ken Cuccinelli lost, with a major factor being money. The Chamber of Commerce contributed nothing to the race, and the Republican Governors Association held back from giving the candidate a late infusion.

The Post’s Marc Fisher and Rosalind Helderman revealed in its look-back that Cuccinelli didn’t call McAuliffe for the traditional celebratory wishes on election night.

Politico’s James Hohmann dives into the pre-election polling, with some strategists suggesting that early numbers shaped the race’s outcome:

Republican Ken Cuccinelli’s chief strategist said Wednesday that the polls were worse than wrong: He believes they badly hobbled his candidate’s viability and made a late comeback more difficult.

“Public polling is essentially a suppression tool used to demoralize our voters and dry up money, especially the latter,” Chris LaCivita told POLITICO.

But McAuliffe pollster Geoff Garin said he never believed the public polling. His numbers always showed it would be a close race. His final poll, finished last Thursday, had McAuliffe up three points, 45 percent to 42 percent, with Libertarian Robert Sarvis pulling 5 percent.

The final result: McAuliffe, 48 percent; Cuccinelli, 45.5 percent; and Sarvis, 6.6 percent.
Most public polls showed a much larger margin for McAuliffe.

Examining the exit polls, it seems McAuliffe was able to boost turnout from the state’s 2009 gubernatorial contest in part by duplicating the model Democrats used to help President Barack Obama win the state for a second time in 2012. He won a lopsided share of single women and young people.

And while the numbers show voters don’t really like the Affordable Care Act, and don’t love McAuliffe, they still chose a new direction for the state.

On the NewsHour Wednesday, we examined the election results and Judy Woodruff spoke with the New York Times’ Martin about how Christie and McAuliffe were able to win and what it signals for the road ahead.

We also examined the import of the three big mayoral races in Detroit, Boston and New York. What do the newly elected officials say about those cities and how policy is made? Gwen Ifill spoke with Bruce Katz of the Brookings Institution and Emily Badger of Atlantic Cities.

They discussed the candidates’ ability to get through to voters with an economic message — and even progressive promises — and noted that with the Bloomberg and Menino eras coming to an end in New York and Boston, Tuesday’s election results present dramatic change.

Should a predominantly Christian town in upstate New York be allowed to start its government meetings with a bowing of heads and an invocation of a higher power, often Jesus Christ?

That was the question before the Supreme Court Wednesday as the justices heard a constitutional challenge to one town’s practice from two women, one who is an aetheist and the other who is Jewish. They say the prayers breach the divide between church and state and violate the Establishment Clause of the First Amendment.

They hoped the Supreme Court would untangle a 30-year-old decision that allows chaplains’ invocations at the start of legislative session, which has led to confusion in lower courts.

Much depends upon the way the nine justices interpret the Establishment Clause, the first 10 words of the First Amendment that say, “Congress shall make no law respecting an establishment of religion.”

“The court has come up with a number of tests for Establishment Clause violations, and none of those tests appear to satisfy all of the justices at any one time,” Marcia Coyle said on the NewsHour Wednesday.

There’s the trouble. While the women ask merely for a ruling on the practice of prayer at local government meetings, others hope for broader pronouncements from the justices. For instance, members of Congress including Sen. Marco Rubio have lent their support to the town, fearing a ruling that could limit Congress’ practice of prayer before session.

A sweeping curtailment on prayer from the Supreme Court seems unlikely, Coyle said.

“Part of what we are trying to do here is to maintain a multi-religious society in a peaceful and harmonious way,” Justice Elena Kagan said during the arguments. “And every time the Court gets involved in things like this, it seems to make the problem worse rather than better.”

On the NewsHour Wednesday, we began with a report from Tim O’Brien that originally aired on PBS’s Religion & Ethics NewsWeekly. Then Jeffrey Brown spoke with Coyle. Watch here or below:

New TIME Cover: The Elephant in the Room pic.twitter.com/D2MOurR8sm

Our final VA poll, finished last Thursday, was 45% McAuliffe 42% Cuccinelli, 5% Sarvis. There was no last minute tightening of the race.

Christie says right now he wants to be Gov. “If the time comes where I change my mind on that, I’ll tell the people of NJ”

Twitter is a bit of an unbearable flood of 2016 hyperventilation today.

Journalism Professor Would Flunk Rand Paul For An ‘Unambiguous Case Of Plagiarism’ http://t.co/dwi6hVKOw6

Bridget Bowman contributed to this report.