Artists design messages of hope and gratitude across NYC

A row of health care workers tower over the New York skyline, lined up like superheroes.

Instead of capes, they’re all wearing the same light blue scrubs, gloves and face masks. And stethoscopes — not a Superman “S” — dangle across their chests. They loom large, but instead of casting a shadow, they seem to radiate light. A message rises behind them — meant for them — in all-caps: NEW YORK LOVES YOU.

Illustrator Edel Rodriguez wanted to reverse the idea behind Milton Glaser’s iconic “I ❤ NY” logo, with the city returning the love to those currently risking their lives on the front lines of this pandemic. 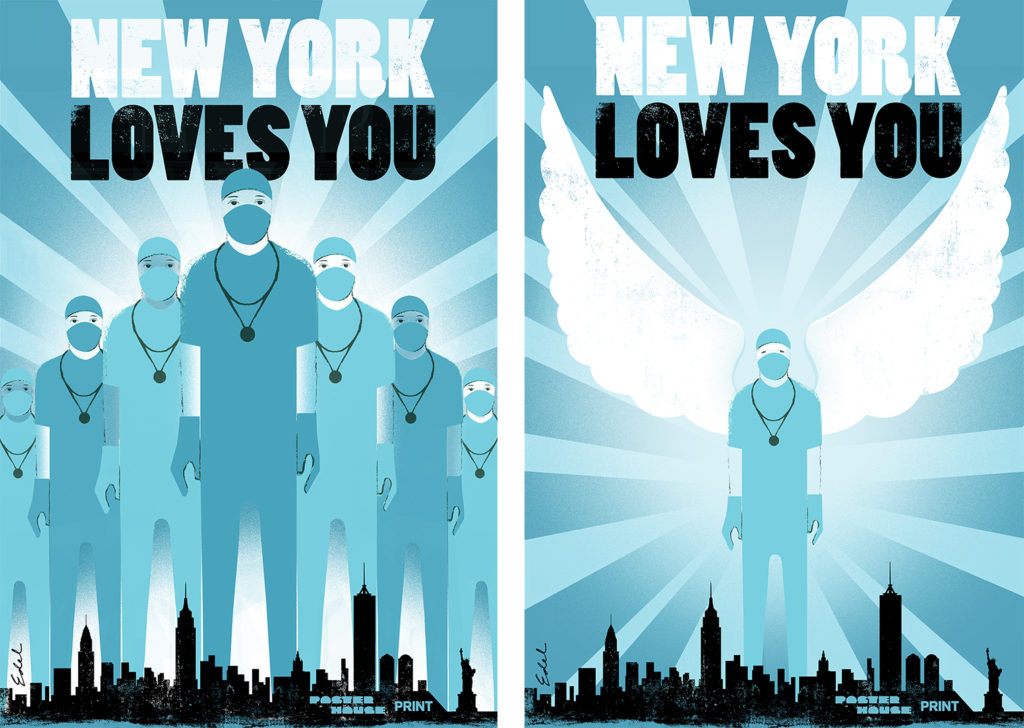 This image, along with others made by selected artists, will appear on hundreds of billboards and kiosks across the five boroughs of New York City starting today, where residents have been going to their balconies and windows every night to cheer on medical workers.

Stark, overhead videos and images of Times Square, known for its cacophony of light and sound — oversized screens and advertisements and bustling crowds — suggest it’s been reduced to a ghost town because of social distancing measures. But the major entertainment center is, in fact, not empty, said Jean Cooney, director of Times Square Arts. Even though the amount of foot traffic has dropped, the pedestrian count in Times Square is currently still at around 30,000 people every day, she said. This means it’s still a good venue for sending a message to the citizens of New York. 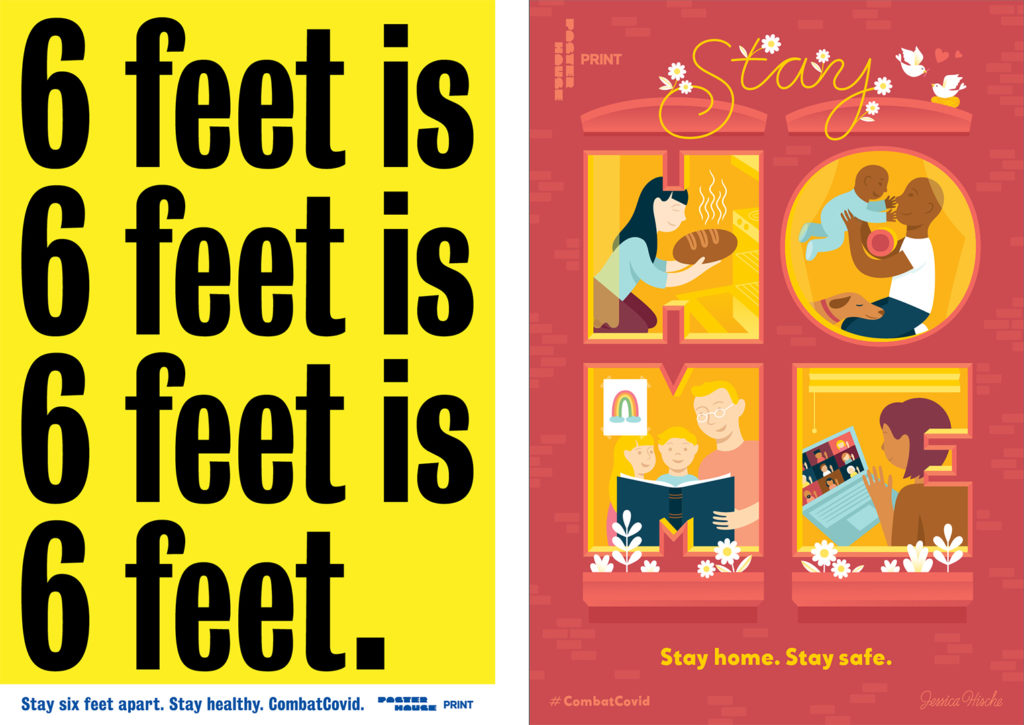 Twenty artists worked with three organizations — Times Square Arts, the Poster House museum and Print Magazine — to create an array of public service announcements that communicate the same directives that scientists and elected officials have heralded as pandemic protection measures: Stay home, stay safe and keep 6 feet apart. The hope is that, in artists’ hands, these messages won’t lose their impact as weeks go by and the crisis is still ongoing.

In addition to expressing gratitude and admiration for health care workers who have to fight COVID-19 up close, the PSAs also acknowledge service and sacrifice from another group: the tens of thousands of essential workers who keep New York — and other American cities — running.

Tens of thousands of New Yorkers — public safety officers, people who work in transit or sanitation, those who make deliveries, the people who keep grocery stores and bodegas open — are not able to work from home. 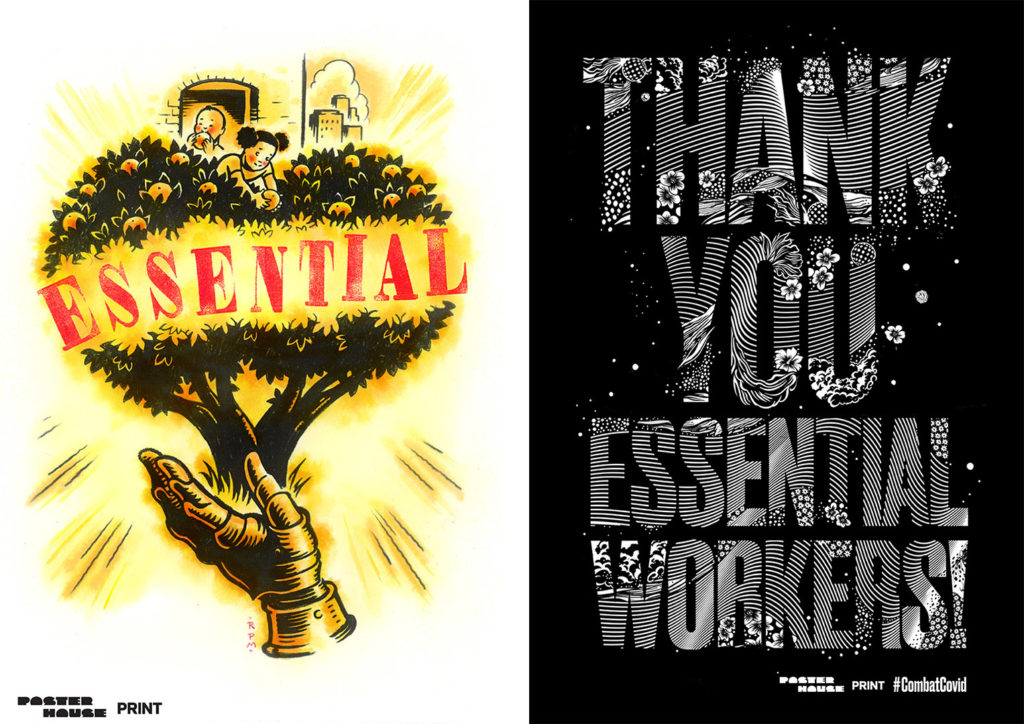 Using “the screens of Times Square as a platform, that’s the community we wanted to speak to,” Cooney said. “We are all going through this together, and that doesn’t mean just New York City. It’s this incredibly rare moment where the entire world is going through this. I want the message to be that we are here and resilient and working through this as best we can together and at a moment where we’re all forced to be separated.”

In other illustrations, Rodriguez’s giant-size health care workers have wings, one version of which will appear on a billboard above the Lincoln Tunnel. Rodriguez said he wanted to play with the idea that, when someone is in trouble, this army of angels comes flying in like superheroes.

“To many people, that’s what it feels like,” he said. “These superheroes are flying in to try to save the day.” He added that he’s seen people who are skeptical of modern medicine like vaccines say, “‘O.K. Yes, we need these guys now. Everybody’s kind of rallying around them.”

Rodriguez said he has a nephew, a medic at a Miami hospital, who learned this week that he’ll be working directly with COVID-19 patients. The novel coronavirus once felt, he said, like this “faraway thing,” until — all of a sudden — it wasn’t.

“That’s the thing with this virus; it starts very far away, and then you find out that a friend might be sick. All of a sudden, it gets closer to home,” he added.

“That’s the thing with this virus; it starts very far away, and then you find out that a friend might be sick. All of a sudden, it gets closer to home.”

Despite their depiction, medical workers are not feeling invincible or superhuman right now. Maria Lobifaro, a ICU nurse at a Veteran Affairs hospital in Brooklyn, told the PBS NewsHour that medical workers in other countries — with lower infection rates than the United States — are seen in a “full-on astronaut suit” as protection. No part of their skin is exposed. Meanwhile, in the U.S., Lobifaro said workers have a “little thin paper gown.” The workers in Rodriguez’s artwork also have skin — their arms — exposed.

The U.S. response to the pandemic has been plagued with concerns from health care workers and public health officials that those on the front lines don’t have enough support or protection.

“I couldn’t feel as further from a superhero as I feel sometimes,” Lobifaro told the NewsHour.

To date, more than 32,000 Americans have died from the virus, according to The COVID Tracking Project. On Thursday, the White House released guidelines for states to begin reopening businesses in phases, at a time when COVID-19-related deaths are expected to climb. 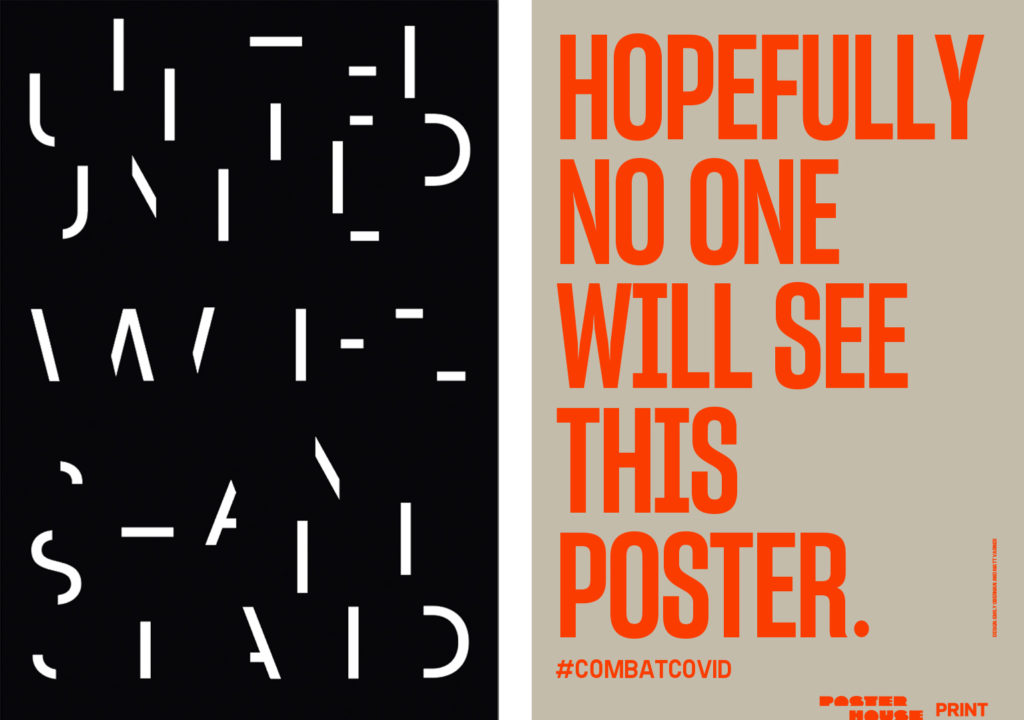 The PSAs will be released in two waves: The first will be work from graphic designers, the second contemporary artists working with an art collective called For Freedoms. In this first crop of PSAs, there are multiple allusions to how, in isolation, we’re still together.

Paula Scher’s poster has colorful, prickly “You” and “Me” virus-like orbs keeping a safe distance from one another. Paul Sahre’s “United We Stand” poster jumbles and breaks apart the letters in the phrase. Emily Oberman’s contribution says in big letters, cheekily: “HOPEFULLY NO ONE WILL SEE THIS POSTER.”

Klaas Verplancke worked with animator Arevik d’Or to create a video PSA, in which two people hit a pingpong ball from one skyscraper to another using frying pans. The joy — and the sound of the pingpong ball being bounced back and forth — recall the videos of Italian neighbors singing out their windows together.

That communal spirit despite strict social distancing orders has been expressed in other countries too. In Wuhan, China, where cases of coronavirus were first reported, citizens chanted a sentiment akin to “keep up the fight” to their neighbors. People exercised together from their balconies in Hamburg, Germany. Seattlites made “joyful noises” to show solidarity for front-line workers.

Verplancke, who’s Belgian and has been in lockdown in that country for five weeks, said the image he and d’Or made is universal, adding that it’s an important time for artists to capture the current moment, in the midst of this pandemic. And moments when we grasp for connection — though not literally — may become part of what defines this era of social distancing.

“One could say that the more that people are disconnected, they try to find ways to connect somehow,” he said.

Verplancke said he’s been writing a lot more to people, asking them how they’re doing. “You start to realize what you have when you miss it,” he said. “Humans that are in relationship with each other, that’s one of the most important things in life.”

There’s a long history of artists being called upon to help convey vital information to the public, like the Works Progress Administration, which employed artists during the New Deal era in the U.S. and tasked them with capturing the experience of the Great Depression in paintings, photographs and posters.

Edel Rodriguez said that history is always on his mind in some way, and informs his process of making his images for the PSAs.

“After a hundred years of history, how do we remember this stuff?” Rodriguez said of the WPA program during World War II. “It’s basically posters, graphics and photographs. … It’s history. You can look back on it, and remember it through the visuals. You kind of take a little bit of responsibility on what that is and what you put out.”

In this quarantine art challenge, creativity begins at home