For his friend James Foley, Daniel Johnson reads ‘In the Absence of Sparrows’

We met up with Daniel Johnson at his home outside of Boston recently to talk about his old and very close friend, James Foley, whom he’s memorialized in the poem “In the Absence of Sparrows.” Johnson, the founding executive director of 826 Boston youth writing center, worked on this poem throughout Foley’s captivity in Syria. He was crafting another verse the August day he heard Foley was beheaded by the Islamic State group in Syria.

The men bonded at Teach for America in Phoenix in the 1990s. Johnson told us, “We became fast friends, and connected around literature. We were always swapping books, and really just spurring each other on. I think he had a real thirst for adventure, this real curiosity, and I think he wanted to see the world first hand, and turn around, and share those stories. Jim had to be in the thick of it.”

After earning an MFA, Foley went on to a masters in journalism and decided to pursue conflict reporting in particular. He covered Iraq, Afghanistan and Libya, where he was held captive for 44 days in 2011. It was on another reporting trip to Syria as a freelance war correspondent when he was abducted in Nov 2012. On Aug 19, at the age of 40, he became the first American citizen known to be killed by the Islamic State group.

“His death played out so publicly, which was horrifying for all of us, I mean his close friends, and of course or his family, the image of Jim in an orange jump suit on his knees in the desert, that’s not Jim. He was courageous to the end. I think he couldn’t help but love,” Johnson said. “I remember after he was freed from Libya, he had nothing but love for the Libyan people, and I believe he forgave his captors. And, I think even in Syria, as extreme as the situation was, I think given Jim’s sort of religious, spiritual beliefs, I think that he was a person very inclined to forgiveness, and kindness. He really thought and hoped for peace to prevail.” 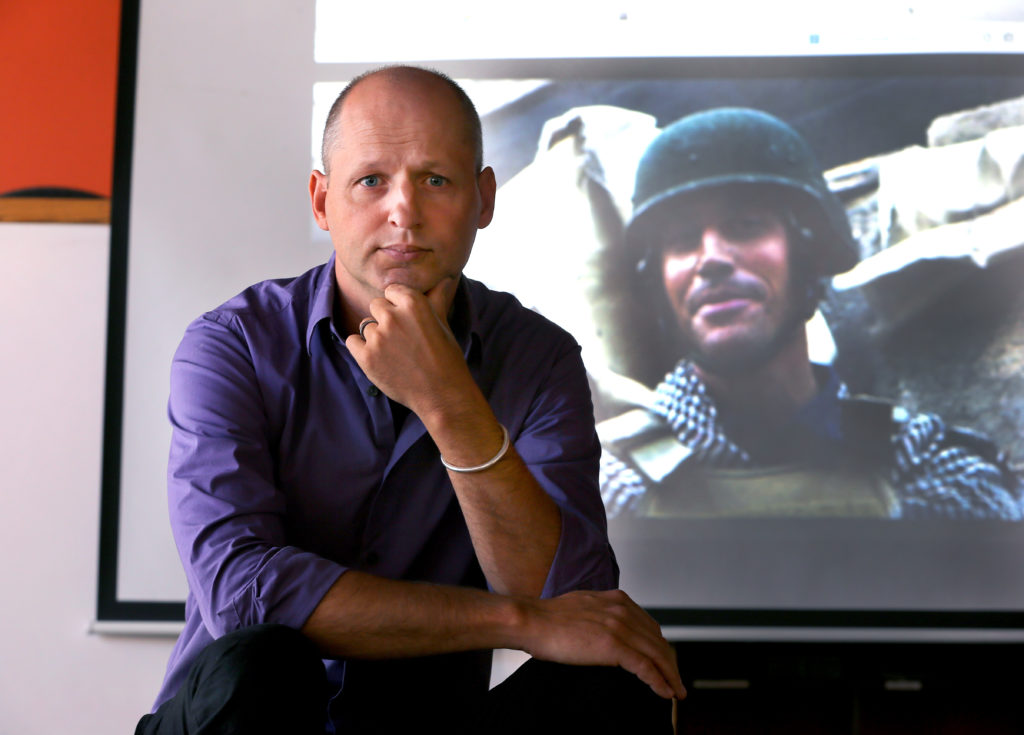 Poet Daniel Johnson had a close friendship with Jim Foley, the journalist captured and beheaded by ISIS. Photo by John Tlumacki/The Boston Globe via Getty Images

Johnson said it was on a New Year’s Eve outing with Foley years ago that Johnson met his wife and while Foley was being held in Syria, the couple baptized their son and named Foley the godfather: “Jim was very spirited. Kids really loved him, Uncle Jimmy. We’ll need to share his story.”

Poetry, he says, is one way to do that. “Poetry, often times in our society, is relegated to the margins, but I don’t think that should be the case. People most often turn to poetry in extreme circumstances, when other language falls away. Birth, death, loss, those are times when poetry, the cadence, the music, the symbols that we use, it’s really transcendent language. Poetry is a way for people to speak across generations, to create art that lasts.”

Read the full text of “In the Absense of Sparrows” below.

In the Absence of Sparrows

I don’t know, Jim, where you are.
When did you last see
birds? The winter sky in Boston

is gray with flu. Newspapers,
senators, friends, even your mom
on Good Morning America—

your hands. You wait and pray, pray
and wait, but this is where the picture goes gray.
We don’t know, Jim, where you are.

In the absence of sparrows: a crowd of friends and family gather in
Rochester,
New Hampshire to recite the holy rosary.

We keep your picture on the kitchen table, pack of American Spirits,
airplane bottle of Scotch, a copy of Krapp’s Last Tape.

Don’t get me wrong; we expect you back. Skinny, feral,
coffee eyes sunken but alive, you’ve always come back, from Iraq,

Syria, Afghanistan, even Libya after Gaddafi’s forces
captured and held you for 44 days. You tracked time scratching

marks with your zipper on prison walls, scrawling notes on cigarette
boxes, reciting the Koran with other prisoners. Then, you called.

DJ, it’s Jimmy…I’m in New Hampshire, brother! I wanted
to break your fucking nose. We ate lobster rolls, instead,

on a picnic bench by Boston Harbor. You made a quick round
of TV shows, packed your camera and Arabic phrasebook.

You skipped town on a plane to Turkey. We talked once. You said
you’d play it safe. The connection was lost.

In the absence of sparrows: American journalist James Foley
disappeared
after being taken captive by armed gunmen near Aleppo, Syria on
Thanksgiving Day.

In the absence of sparrows: our house burns blue with news.

Winter solstice, 1991. You turned donuts,
drinking beers, in a snowy public lot next to the lake.
Girls yelped. You cranked the Pixies louder, cut the lights,
and steered Billy’s grandma’s Chrysler onto the Winnipesaukee ice.
The moon flamed bright as a county coroner’s light.
You revved the station wagon’s engine. Billy tied
a yellow ski rope off the hitch, flashed a thumbs up,
and you punched the gas—5, 15, 20, 25 miles per hour—
towing Billy, skating in high-top sneakers,
across the frozen lake. Chill air filled his lungs.
Billy pumped his fist. You torqued the wheel left.
Triumphant, you honked and flashed the lights.
You took a swig of Heineken and wheeled
the wood-paneled station wagon in a wide-arcing turn
to pick up Billy, bloodied but standing. People do reckless things
but your friends dubbed you the High King of Foolish Shit.
The nose of Billy’s grandma’s Chrysler broke the ice.
You jammed it into reverse. Bald tires spinning,
you flung yourself from the car. In seconds, it was gone.
You gave Billy’s grandma a potted mum
and a silver balloon. Standing on her screened-in porch,
you mumbled an apology. What am I supposed to do now?
she asked. What the hell do I do now?

In the absence of sparrows: when falling snow, out the window,
looks like radio waves,
your face appears, your baritone laugh.

We read Abbie Hoffman, 1968, watched Panther documentaries,
The Weather Underground, and packed our bandanas, first aid kits,
fat markers, maps and signs for New York City. A31, they called it,
a day of direct action, a time to heave ourselves on the gears

of an odious machine. We marched, drumming and chanting, half
a million strong,
through the streets of Lower Manhattan. Worst President Ever, A
Texas Village
Has Lost Its Idiot. Protestors carried a flotilla of flag-covered coffins.
We hoisted homemade signs and cried out, Whose streets?

Our streets? No justice, no peace! I’d packed sandwiches,
water, mapped restrooms along the parade route, inked
the hotline for Legal Services on your forearm and mine.
You, my wild half brother, packed only a one hitter, notepad, and pen.

When the parade snaked past the New York Public Library,
we peeled off to confront 20 cops in riot gear blocking entry
with batons drawn. We took position on the library steps.
Stone-still, inches from police, we held our signs

stamped with a student gagged by padlock and chain.
I could feel breath on my neck. We narrowly escaped arrest,
then streamed toward the Garden, a ragtag troop of 200.
We evaded barricades. Cut down alleys. At Herald Square, only

blocks from the Republican Convention, cops on mopeds
cut us off. They rolled out a bright orange snow fence,
hundreds of yard long, then zip cuffed us, one by one.
I called Ebele. You called your brother, set to be married in just three
days.

His best man, you were headed to jail. “I’ll be there Friday for the golf
outing,”
you vowed, a cop cutting your phone call short. They took you first.
Threw you on a city bus headed to Pier 14 on the Hudson,
a giant garage stinking of axel grease and gasoline. Stepping off the
bus,

I scanned hundreds of faces staring through chain link, newly erected
and topped with concertina wire. I couldn’t find you. I can’t. They
transferred me,
in soapy light, to the Tombs, Manhattan’s city jail, and freed me
after 24 hours
to wander the streets. I peered in Chinese restaurants, seedy Canal
Street bars,

called your cell phone from a payphone, trekked to Yago’s apartment
in Spanish Harlem, eager to crack beers, to begin weaving the story
we would always tell. You were not there. Waiting outside the Tombs,
I missed my flight home. Waiting, I smoked your cigarettes on the fire
escape.

In the absence of sparrows: all of a sudden, you appear. Standing
before a cinder block
wall, you’re holding a video camera with a boom mic and wearing a
bulletproof
vest.

In the absence of sparrows: the front page story says you’ve been
missing since
November 22, 2012. Everything else it doesn’t say.

In the absence of sparrows: you simply wandered off, past the Sunoco,
pockets stuffed.
The door to your apartment is open still—

Left: James Foley -- an American journalist who was murdered as a hostage by the Islamic State group -- met poet Daniel Johnson many years ago, and the two became good friends. When Foley was captured in Syria, Johnson wrote a poem about his absence. Foley was killed by the Islamic State militants in August 2014. Video by PBS NewsHour