LOS ANGELES — Stan Lee, the creative dynamo who revolutionized the comic book and helped make billions for Hollywood by introducing human frailties in superheroes such as Spider-Man, the Fantastic Four and the Incredible Hulk, died Monday. He was 95.

Lee was declared dead at Cedars-Sinai Medical Center in Los Angeles, according to Kirk Schenck, an attorney for Lee’s daughter, J.C. Lee.

As the top writer at Marvel Comics and later as its publisher, Lee was widely considered the architect of the contemporary comic book. He revived the industry in the 1960s by offering the costumes and action craved by younger readers while insisting on sophisticated plots, college-level dialogue, satire, science fiction, even philosophy.

“The beauty of Stan Lee’s characters is that they were characters first and superheroes next.”

Millions responded to the unlikely mix of realistic fantasy, and many of his characters, including Spider-Man, the Hulk and X-Men went on to become stars of blockbuster films. Recent projects he helped make possible range from the films “Black Panther” and “Doctor Strange” to such TV series as “Agents of S.H.I.E.L.D” and “Guardians of the Galaxy.”

“I think everybody loves things that are bigger than life. … I think of them as fairy tales for grown-ups,” he told The Associated Press in a 2006 interview. “We all grew up with giants and ogres and witches. Well, you get a little bit older and you’re too old to read fairy tales. But I don’t think you ever outgrow your love for those kind of things, things that are bigger than life and magical and very imaginative.”

Lee considered the comic-book medium an art form and he was prolific: By some accounts, he came up with a new comic book every day for 10 years.

“I wrote so many I don’t even know. I wrote either hundreds or thousands of them,” he told the AP in 2006.

He hit his stride in the 1960s when he brought the Fantastic Four, the Hulk, Spider-Man, Iron Man and numerous others to life.

“It was like there was something in the air. I couldn’t do anything wrong,” he recalled.

His heroes, meanwhile, were a far cry from virtuous do-gooders such as rival DC Comics’ Superman.

The Fantastic Four fought with each other. Spider-Man was goaded into superhero work by his alter ego, Peter Parker, who suffered from unrequited crushes, money problems and dandruff. The Silver Surfer, an alien doomed to wander Earth’s atmosphere, waxed about the woeful nature of man. The Hulk was marked by self-loathing. Daredevil was blind and Iron Man had a weak heart.

“The beauty of Stan Lee’s characters is that they were characters first and superheroes next,” Jeff Kline, executive producer of the “Men in Black” animated television series, told The Blade of Toledo, Ohio, in 1998.

Some of Lee’s creations became symbols of social change — the inner turmoil of Spider-Man represented ’60s America, for example, while The Black Panther and The Savage She-Hulk mirrored the travails of minorities and women.

Lee scripted most of Marvel’s superhero comics himself during the ’60s, including the Avengers and the X-Men, two of the most enduring. In 1972, he became Marvel’s publisher and editorial director; four years later, 72 million copies of Spider-Man were sold.

“He’s become our Mickey Mouse,” he once said of the masked, web-crawling crusader.

Some of Lee’s creations became symbols of social change — the inner turmoil of Spider-Man represented ’60s America, for example.

Lee also published several books, including “The Superhero Women” in 1977 and “How to Draw Comics the Marvel Way” the following year, when he was named publisher of the year by the Periodical and Book Association of America.

CBS turned the Hulk into a successful TV series, with Bill Bixby and Lou Ferrigno portraying the doomed scientist from 1978-82. A Spider-Man series ran briefly in 1978. Both characters were featured in animated TV series as well.

The first big-budget movie based on Lee’s characters, “X-Men,” was a smash in 2000, earning more than $130 million at North American theaters. “Spider-Man” did even better, taking in more than $400 million in 2002. 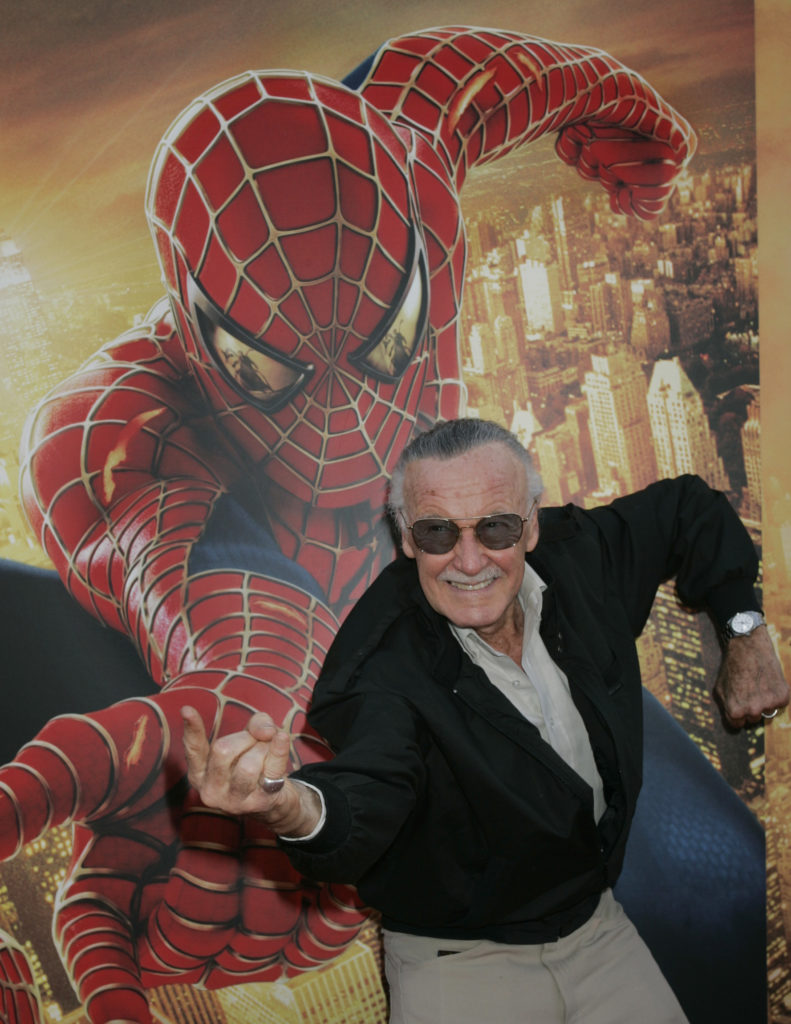 Lee, creator of the Spider-Man character, poses at the premiere of “Spider-Man 2,” in Los Angeles June 22, 2004. Photo by REUTERS/Fred Prouser FSP/HB

Left: Lee was a creative dynamo who revolutionized the comics by introducing human frailties in superheroes. Photo by The Washington Post/ Getty Images