The show must go on! If you’re isolated at home, watch these performances

Maybe your favorite band just cancelled their concert, or the dance performance you bought tickets for months ago has been called off. Even the local high school’s musical won’t go on — at least not in person.

Social distancing measures aimed at reducing the spread of novel coronavirus have closed venues and postponed events around the world. Fortunately, many institutions and theaters are planning ways to keep engaging and entertaining viewers while most people are trying to stay close to home.

From Joe’s Pub in New York City to the Vienna State Opera, audiences can livestream a myriad of shows from across the globe without jeopardizing anyone’s health during this unusual moment of social isolation.

Watch something captivating from this list, or from a different source? We want to hear from you. Share what you found in the Canvas Facebook group.

The Seattle Symphony is organizing free livestreams and rebroadcasts via YouTube and Facebook until the orchestra can return to Benaroya Hall.

Watch and listen to music videos and live-streams from the Chamber Music Society of Lincoln Center.

Joe’s Pub, a small performance space within the Public Theater in New York, has forthcoming streaming events. Available now is Roberto Fonseca’s recent concert on their YouTube page and look for more on their YouTube channel.

Wigman’s Hall will be offering free livestreams of upcoming performances. Tune in on March 22 at 3:30 p.m. EDT to see a live presentation of “England’s Orpheus.” On April 6 at 2:30 p.m. EDT, head back for “Leon McCawley, piano.”.

Washington Heights Chamber Orchestra has announced plans to release videos for viewers to enjoy while practicing social distancing, including an upcoming internet broadcast of the show “Above 155th Street.”

The Metropolitan Opera has launched the series “Nightly Met Opera Streams,” free encore performances each night from March 16 – March 22. They’re available on any of the Met on Demand apps or at their website. 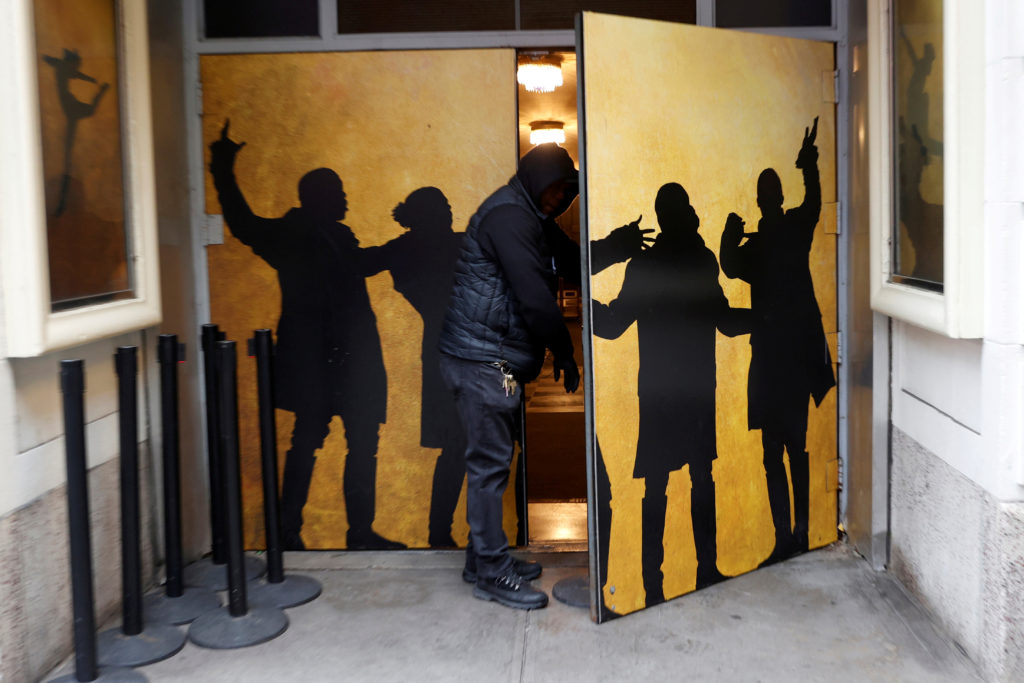 A worker removes stanchions used for arriving audience members at the Richard Rodgers Theater where the musical “Hamilton” plays. Broadway shows have been canceled in the wake of the outbreak. Photo by Mike Segar/Reuters

For a limited time, Houston’s Alley Theatre will allow you to stream their production of “1984” from the comfort of your home.

Beginning on March 20, view “Teenage Dick” from Theatre Wit in Chicago until April 19 for $20.

Watch the Vienna State Opera (Wiener Staatsoper)’s in its “Live from Home” series.

And while many film enthusiasts were disappointed by the cancellation of the South by Southwest Festival, the festival organizers plan to make the films available for online streaming. Stay tuned.