This pop-up bakery brings Palestinian taste around the world

Australian-Palestinian entrepreneur Ameer El-issa and a team of eight “bearded bakers” brought a new flavor to New York this year from one of the most world’s controversial conflict zones.

Knafeh Bakery, a pop-up bakery, serves knafeh, a traditional cheese-based dessert popular in the Levant, from a shipping container that has made pit stops in cities including Washington, D.C., Philadelphia, and Paterson, New Jersey.

“We have this one product,” said El-issa, who co-founded Knafeh Bakery with his brother Joey in Sydney, Australia, in 2014. “There are no sizes, no variations, and you cannot amend the dish. The only thing you can tell us is how many you want.” 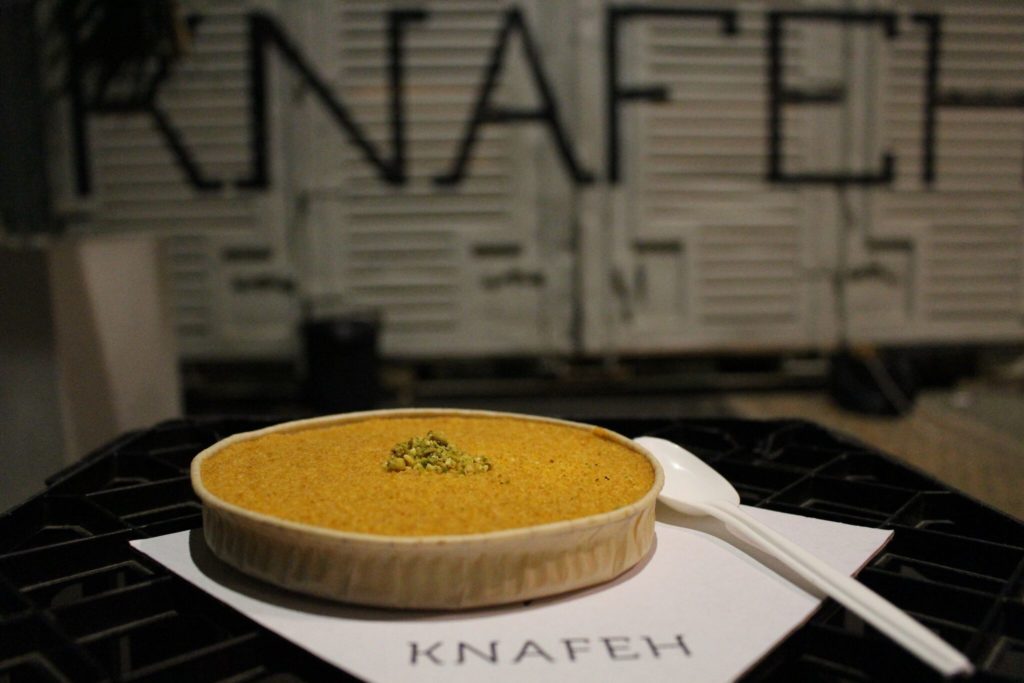 Knafeh, a cheese based dessert soaked in syrup and garnished with pistachios. Photo courtesy of Ameer El-issa

Knafeh Bakery was born out of a conundrum the restaurateur family faced a few years ago. At Shisha Bar & Grill, a restaurant the El-issas once owned in Sydney, a lighter and creamier adaptation of the syrupy cheese dessert was on the menu. Its popularity, which put the restaurant on the food map in Australia, was so overwhelming that the family looked for ways to take the pressure off the kitchen.

In 2014, El-issa and his brother Joey fashioned themselves as the “Bearded Bakers” and took knafeh to the streets of Sydney. A year later, they went to Melbourne. This September, New York became their first international pop-up.

While scholars are divided on the origin of knafeh, which dates back centuries, many Palestinians believe that the dish originated in Nablus in the West Bank. With a number of variations across the region, the knafeh is an important symbol of Palestinian cuisine. 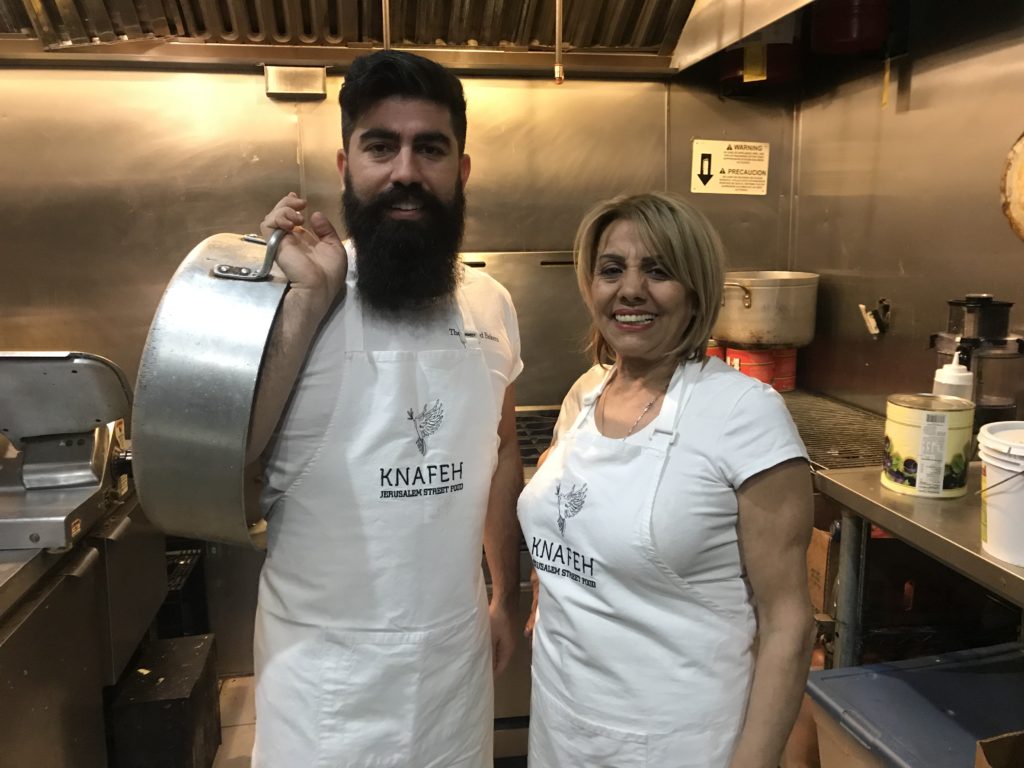 For El-issa, food is more than just business – it is a legacy from his father, who was born in Jerusalem. His mother, Nabila, immigrated to Australia from Amman, Jordan, in 1972, created the recipe the brothers use today and oversees the production of the dessert. “Knafeh is for everyone’s palate,” Nabila said.

El-issa, an architect by training, credits his passion for the hospitality industry and love for design to the company’s success. As a teenager, he scrubbed dishes in cafes and watched his parents as they bought, run, and sold restaurants in Australia.

Promoted only through social media, the bakery has managed to create a whole new “after-dinner market,” he said. Hundreds of people across a variety of demographics queue up, entertained by spontaneous bursts of song and dance by the bakers, many of whom hail from Middle Eastern backgrounds.

The El-issas, who call their knafeh “Jerusalem street food,” don’t believe in emphasizing their Palestinian Christian identity in the business. When Nabila first came to Australia, most people confused it for Pakistan, she said. But conversations around food usually lead to discussions about identity.

“We showcase our culture and upbringing through our work,” El-issa said. “When people find out, it’s a proud moment.”

Over the last few years, cookbooks penned mostly by Palestinians living in the diaspora and visits by celebrated food critics and writers, like Britain’s Jancis Robinson and her husband Nicholas Lander to the region, have helped bring international attention to Palestinian food, according to Fadi Kattan, who owns the boutique hotel Hosh Al-Syrian in Bethlehem.

Kattan, who is also the head chef of the hotel’s Fawda Restaurant, believes that the key to preserving Palestinian culinary heritage and in turn, challenging public perceptions of the region, is by reinventing the way it is presented. Instead of portraying it as “rural, rustic food,” he aims for an inventive approach to Palestinian cuisine.

Food helps establish and preserve Palestinian identity and maintains cultural links throughout the diaspora, according to Dr. Ali Qleibo, a Jerusalem-based author, anthropologist and artist

“My cuisine is Palestinian products being given back their nobility,” he said. “We use traditional cooking methods like clay pots, but I try to preserve the taste of the land.”

At his restaurant, Kattan, who has trained in kitchens in France and England, deconstructs and reinterprets traditional recipes including musakhan, a traditional dish consisting of bread, chicken, onions, and sumac, along with knafeh, which he serves with seasonal fruit. He has cooked with top international chefs like Britain’s Tom Hunt and Norway’s Andreas Viestad, who passed through Bethlehem.

Food helps establish and preserve Palestinian identity and maintains cultural links throughout the diaspora, according to Dr. Ali Qleibo, a Jerusalem-based author, anthropologist and artist.

“[Food] defines our boundaries and us as a people, who are stateless and come from a particular geography with particular tropes,” Qleibo said. “It’s part of the national consciousness.”

As part of their expansion plan to launch in a new international city every year, the El-issas are mulling over Dubai, London or Berlin as their next destination. El-issa, who has never visited his ancestral land, is keeping an eye out for opportunities like education programs where he can engage with Palestinian youth.

“When we visit, it will be a bigger purpose than just a holiday,” he said. “It will be to bring something back to our homeland.”

Left: The "Bearded Bakers" entertain crowds at their pop up. Photo courtesy of Ameer El-issa