Why we need COVID memorials now — and for the future

Standing at a lectern in Detroit’s Belle Isle Park on that sunny morning, Riley shook one in each hand, seconds before church bells in the distance joined in. The city’s day of honoring loved ones lost to COVID-19 had begun.

Closed to traffic, the park had been transformed into a memorial. Roughly 900 photos of local victims, blown up as “billboards,” lined the island’s roadways. Hearses and police escorts led mourners as they slowly drove, paying their respects from a safe distance in their cars. This moment had come about after a constituent had appealed to Mayor Mike Duggan to do something to honor families who weren’t able to hold typical funerals during the pandemic, due to virus restrictions.

It’s been more than a year since the U.S. confirmed its first case of COVID-19, and the virus’ grip on the nation has led to at least 500,000 deaths. We know far more about the virus now than we did then, and the rising rate of vaccination promises a long denouement to the crisis. But the pain of each life lost is sure to linger.

For families in the U.S. who have said goodbye to at least one family member, that means an empty chair at the dinner table, a phone that will never again be answered, a familiar pair of arms that will never offer another hug. Life may return to more normal rhythms at some point this year, but there will be painful days for millions in the years to come. How will we, as a nation, acknowledge that immense toll?

For Detroit, a citywide memorial was a way of answering: Do not shy away or dismiss the grief.

“We didn’t want people to hide their grief.”

The “drive-around” experience was dreamt up to deepen the families’ connections with their loved ones and to underscore the monumental loss from the pandemic, said Riley, the city’s arts and culture director who led the effort. When August rolls around again, Detroit officials hope to plan a different way to mark what is now forever known as Detroit Memorial Day.

“We didn’t want people to hide their grief,” Riley said. “We wanted people to lean in a bit to know that we felt it with them and to encourage people to live a life of purpose on behalf of those folks that are gone.”

Throughout President Donald Trump’s term, there was no official effort by the U.S. government to commemorate the dead. Trump also publicly downplayed the severity of the virus, as the sobering number of cases and deaths continued to rise, and cast doubt on the usefulness of masks long after health officials pleaded with the public to use them.

In the absence of a national memorial, people, organizations and communities around the country have erected their own. With these makeshift remembrances, families of COVID victims wanted to return focus to the names and lives behind the daily tally of the dead, to make their glaring absence tangible by taking up space, temporarily, with physical objects — whether flags, chairs or paper lanterns.

Monuments have been erected for war veterans and victims, leaders both heroic and malignant, conflicts that reshaped the world. But memorials dedicated to victims of a devastating disease are far less common.

At least 675,000 died in the U.S. from the 1918 flu epidemic, a towering figure that surpasses the numbers of U.S. soldiers who died in combat in all the wars in the 20th century combined. That global pandemic was the deadliest since the bubonic plague in the Middle Ages, killing more than 50 million worldwide, yet the staggering loss spawned few statues or other structures.

In 2018, Brian Zecchinelli and his wife Karen installed a granite bench at a Barre, Vermont, cemetery, 100 years after the influenza hit the city. A year later, New Zealand unveiled a zinc plaque at a memorial park in remembrance of the thousands there who died from the flu.

That pandemic is inextricably linked to World War I, as crowded military camps may have hastened the virus’ spread. But memorials to the “war to end all wars” took precedence over the “tremendous killer” flu, said Emily Godbey, an art and visual culture professor at Iowa State University.

Incomplete information, too, provides a challenge for plague memorials. The people who died from disease didn’t have military ranks, Godbey said. “They’re just anonymous [to] most people,” she said. 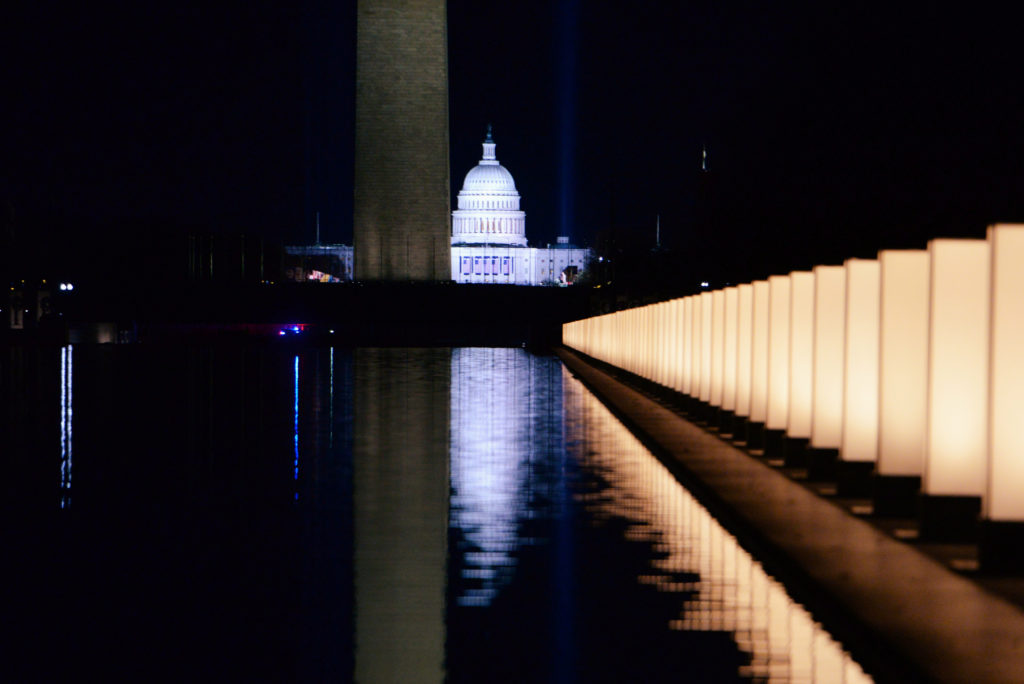 “To heal, we must remember,” President Joe Biden told a reeling nation the day before his inauguration in January. His brief remarks outside the Lincoln Memorial in Washington, D.C., was a first step in mourning the dead on a national scale. Four hundred lights were arranged along the still water of the Reflecting Pool that night, representing what was then 400,000 U.S. lives lost to COVID. The somber gesture was fleeting, the lights of the temporary tribute soon gone, but Biden has made it a point to acknowledge new grim milestones. When the number of COVID deaths in the U.S. neared 500,000, the Biden administration planned a moment of silence and candle-lit ceremony. While an architect in Uruguay has laid out plans for a “world memorial to the pandemic,” whether there will ever be a permanent monument to commemorate the dead in the U.S. is yet to be seen.

Godbey believes a lasting tribute will be needed, one that goes beyond the digital realm to offer a tactile, more cathartic experience. “A place to openly cry not just about the deaths, but the toll the pandemic has taken on people’s lives. A place that’s not at home alone, looking at a computer screen,” she said.

“The more temporary solution, like putting chairs out or putting flags out, is really going to need to be replaced by something that people can go and touch and mourn and get some of their feelings out,” she said. Godbey pointed to the Vietnam Veterans Memorial, a black granite wall in D.C. designed by Maya Lin, that honors service members killed in that war. Stonecutters etched the names of the dead into the stone, emphasizing each person’s sacrifice. Once derided as a “black gash of shame,” it’s become a place of pilgrimage to pay respects, whether you know any among the deceased listed or not.

Godbey is hopeful that, despite past politicization around public health efforts and the denial by some of the virus’ threat, it won’t take a century until an American COVID memorial is solidified.

Italy held a number of ceremonies late February to mark its first-known COVID death and commemorate the lives lost since. In Codogno, an Italian town in the Lombardy region, residents laid a wreath at three steel pillars dedicated to COVID victims. In Vo, a town in the Veneto region, a plaque was placed with an inscription that quotes poet Ugo Foscolo: “A man never dies if there is someone who remembers him.” 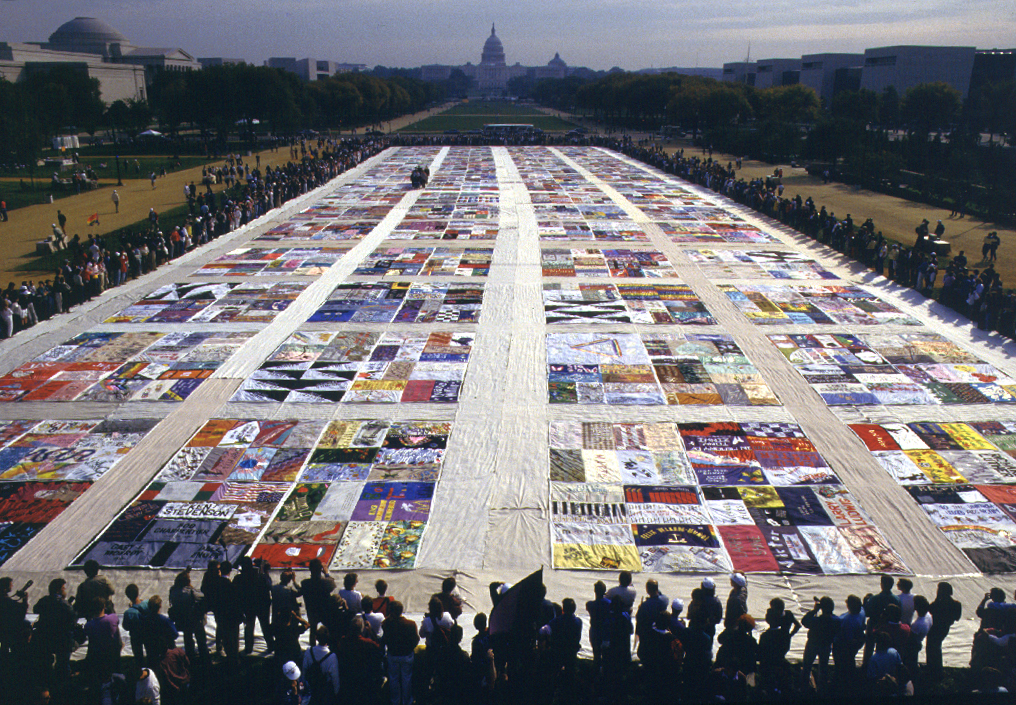 The AIDS Memorial Quilt displayed on the National Mall in Washington, D.C., in 1987. Photo courtesy of AIDS Memorial

A few years after scientists first identified AIDS, there appeared to be little action from the government to address the new public health crisis. The AIDS Memorial Quilt started out of anger more than sorrow, said Gert McMullin, an activist and a lead caretaker of the quilt for about 33 years. She and others “wanted to throw [these panels] down in front of the White House and humiliate the government,” which had paid little attention to the disease killing many in the gay and trans communities in America, “into doing something for us.”

McMullin was part of a group of friends who created the early patchwork. San Francisco gay rights activist Cleve Jones ran with the idea after seeing placards, written with the names of loved ones who died of AIDS, taped to the walls of a federal building during a candlelight march in 1985. Together, the placards resembled the loose outline of a quilt.

The 3-by-6 foot panels, the size of an average human grave, was a visual protest of the devastating crisis. But then the quilt turned more into a memorial, a way for survivors of AIDS victims to talk about the people they had lost.

Each piece of the quilt contains artifacts that offer glimpses into how each person lived and was loved. Made up of 48,000 panels and counting, McMullin can easily recall the numbers assigned to blocks containing the first two panels she made, honoring friends who died of complications from the virus in the 1980s. 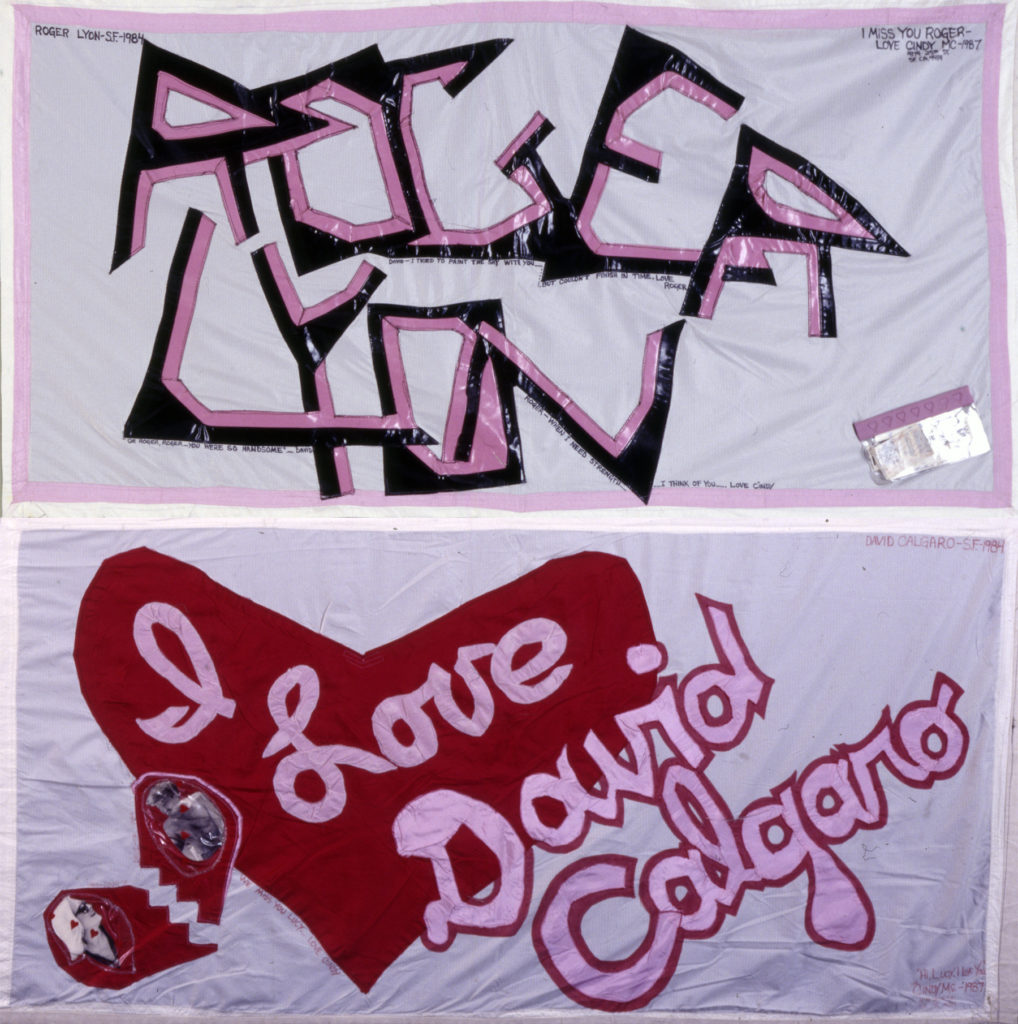 Two separate panels McMullin made for her friends Roger Lyon and David Calgaro, which appear on different parts of the AIDS Memorial Quilt. Photos courtesy of National AIDS Memorial

Block No. 0008 has a panel for Roger Lyon, whose name is written in large, angular, black and pink vinyl. A note under the lettering reads, “I tried to paint the sky with you. But couldn’t finish in time,” words from a message Roger wrote to his lover, David. Block No. 0004 has a panel for David Calgaro, whose name was stitched by McMullin in front of a large, red heart, recalling the title credits for “I Love Lucy,” a shared TV obsession between the friends.

As conservator and production manager at the NAMES Project Foundation, the organization that protected and maintained the quilt for decades, McMullin has acted as its chaperone on trips, its mender when panels, which she calls “old soldiers,” start to tear or fade. When portions return in need of repairs after being on display at a museum, she’s careful to not replace too much because the fabric, as submitted, might carry heavy sentimental value. A panel may have been made from a T-shirt that belonged to a loved one.

As the wording of some early panels fade, McMullin said, “even my heart tells me not to fix it because maybe it’s just getting older … and maybe that’s the way it’s supposed to be.” 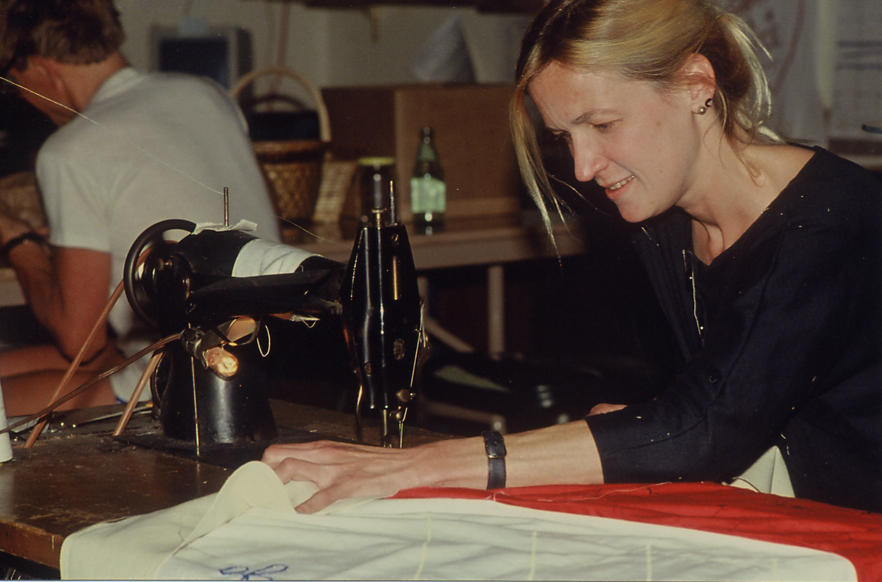 Today, the AIDS Memorial Quilt weighs about 54 tons and represents more than 105,000 lives lost to AIDS. The still-expanding quilt is housed in the San Francisco Bay Area now under the care of the National AIDS Memorial.

“It would be over my dead body if it were ever put into a storage unit or museum where it would never be seen again,” she said.

The quilt may not be as permanent as stone, but shows how a grassroots memorial — cut from anger, love and community — can endure over the years.

As a witness to both AIDS and the coronavirus pandemic, which share parallels of fear, uncertainty, and a tepid response from the government, McMullin hopes that people who have not been affected so directly have the capacity to be compassionate.

“These people meant the world to somebody,” she said of COVID deaths. “If we can’t care about somebody else’s loss, we’re in big trouble.”

Left: Last year, Detroit Mayor Mike Duggan declared Aug. 31 as "Detroit Memorial Day" to pay tribute to the more than 1,500 people who had died locally from COVID-19 at that time. Photo by Aaron J. Thornton/Getty Images