All around New Orleans, thousands of houses are being decorated as floats because the coronavirus outbreak canceled the elaborate parades mobbed by crowds during the Carnival season leading to Fat Tuesday.

Some smaller groups announced no-parade plans before the city did. Pandemic replacements include scavenger hunts for signature trinkets that normally would be thrown from floats or handed out from a streetcar, as well as outdoor art and drive-thru or virtual parades. The prominent Krewe of Bacchus has an app where people can catch and trade virtual trinkets during Carnival and watch a virtual parade Feb. 14, when the parade had been scheduled.

But the “house float” movement started almost as soon as a New Orleans spokesman announced Nov. 17 that parades were off.

That morning, Megan Joy Boudreaux posted what she later called a silly Twitter joke: “We’re doing this. Turn your house into a float and throw all the beads from your attic at your neighbors walking by.” 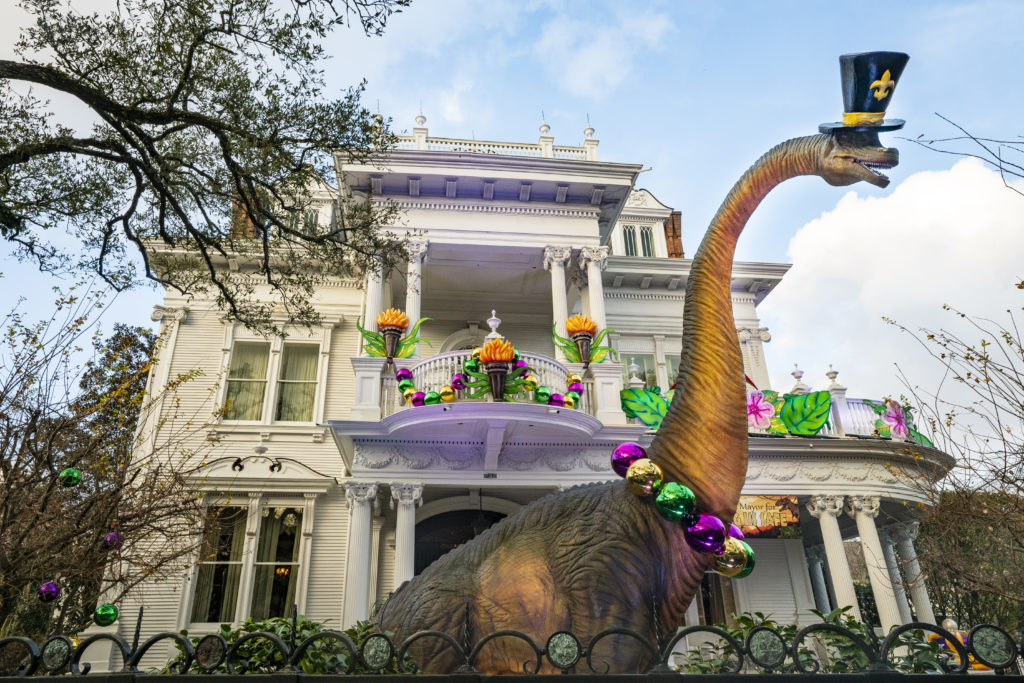 View of a home decorated to celebrate Dino Gras on January 24, 2021 in New Orleans, Louisiana. Due to the COVID-19 pandemic cancelling traditional Mardi Gras activities, New Orleanians are decorating their homes and businesses to resemble Mardi Gras floats. Photo by Erika Goldring/Getty Images

But the more she thought about it, the more she liked it. She started a Facebook group, the Krewe of House Floats, expecting a few friends and neighbors to join. The numbers rose. Thirty-nine subgroups evolved to discuss neighborhood plans.

By Carnival season’s official start Jan. 6, the group had more than 9,000 members, including out-of-state “expats.” About 3,000, including a few as far afield as England and Australia, will have their houses on an official online map, said Charlotte “Charlie” Jallans-Daly, one of two mapmakers.

Houses are to be decorated at least two weeks before Fat Tuesday, which is Feb. 16 this year. With widespread addresses and two weeks to gawk, the hope is that people will spread out widely in time and space.

“I didn’t think I was starting a Mardi Gras krewe. Here I am,” Boudreaux said. “I’ve got myself a second full-time job.”

Discussions in the Facebook groups include how-tos, ads for props and neighborhood themes. Artists have given livestreamed outdoor lessons.

Katie Bankens posted that her block’s theme was Shark Week staycation paradise. When a resident worried that she was not “crafty” enough, administrator Carley Sercovich replied that if they could play music and throw trinkets to neighbors, “you are perfect for this Krewe!”

Boudreaux also suggested that people could hire or buy from out-of-work Carnival artists and suppliers hit by the parade cancellation. A spreadsheet of artists and vendors followed. One of them, artist Dominic “Dom” Graves, booked more than 20 five-person classes in professional papier mache techniques, at $100 a person.

Devin DeWulf, who already had started two pandemic charities as head of the Krewe of Red Beans walking club, kicked the house float idea up a few notches at the suggestion of Caroline Thomas, a professional float designer. Their “Hire a Mardi Gras Artist” crowdfunded lotteries collected enough money to put crews to work decorating 11 houses, plus commissioned work at two more houses and seven businesses. 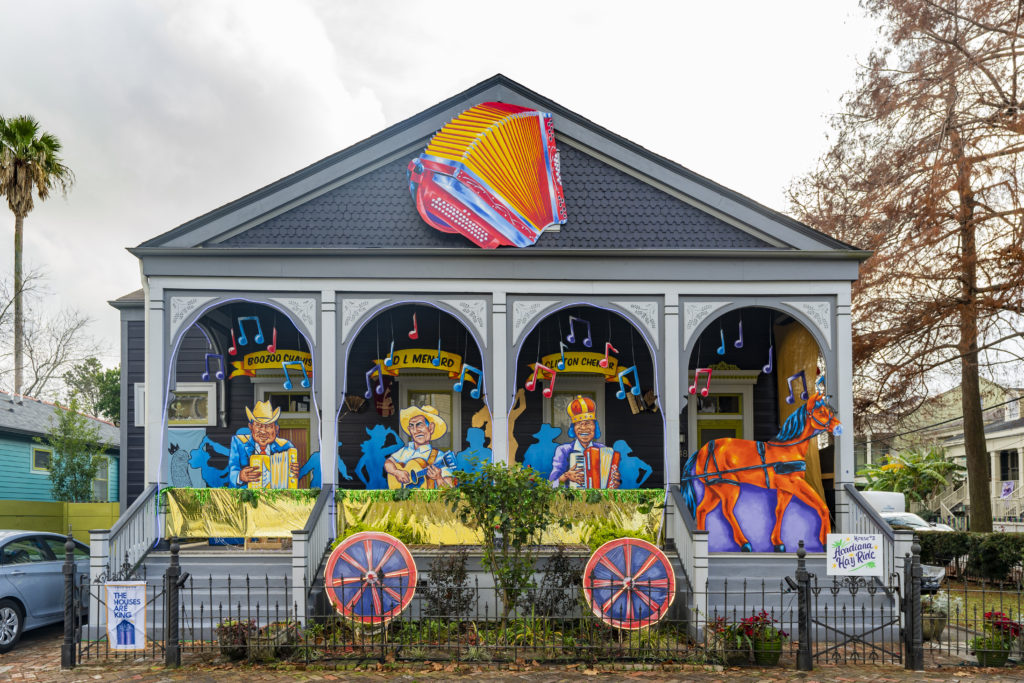 View of The Acadiana Hay Ride House, whose decorations are sponsored by Krewe of Red Beans, and pays homage to zydeco pioneers Boozoo Chavis and Clifton Chenier and the “Cajun Hank Williams” D.L. Menard on January 24, 2021 in New Orleans, Louisiana. Due to the COVID-19 pandemic cancelling traditional Mardi Gras activities, New Orleanians are decorating their homes and businesses to resemble Mardi Gras floats. Photo by Erika Goldring/Getty Images

“We’ve put about 40 people to work, which is nice,” DeWulf said. With Mardi Gras approaching, he said a 12th lottery would be the last.

One commissioned house is rented by a pair of nuns.

Sisters Mary Ann Specha and Julie Walsh, who run a shelter for homeless women with children, had to get permission for their own crowdfunding from the motherhouse of the Sisters of the Presentation of the Blessed Virgin Mary in Dubuque, Iowa. “They loved it,” Specha said.

The crowdfunded decorations may be auctioned after Mardi Gras to raise more money, DeWulf said.

Several mansions along a short stretch of St. Charles Avenue had elaborate displays with signs noting their creation by one of the city’s biggest float-making studios.

Tom Fox, whose wife, Madeline, painted a Spongebob Squarepants scene and made jellyfish from dollar store bowls, said he thinks a new tradition may have begun.

“Even when Mardi Gras comes back, I think people are going to keep doing this,” he said.