It’s the third time the commission has slapped Google with an antitrust penalty, following multibillion-dollar fines resulting from separate probes into two other parts of the Silicon Valley giant’s business.

The EU’s competition commissioner, Margrethe Vestager, announced the results of the long-running probe of Google’s AdSense advertising business at a news conference in Brussels on Wednesday.

“Today’s decision is about how Google abused its dominance to stop websites using brokers other than the AdSense platform,” Vestager said. 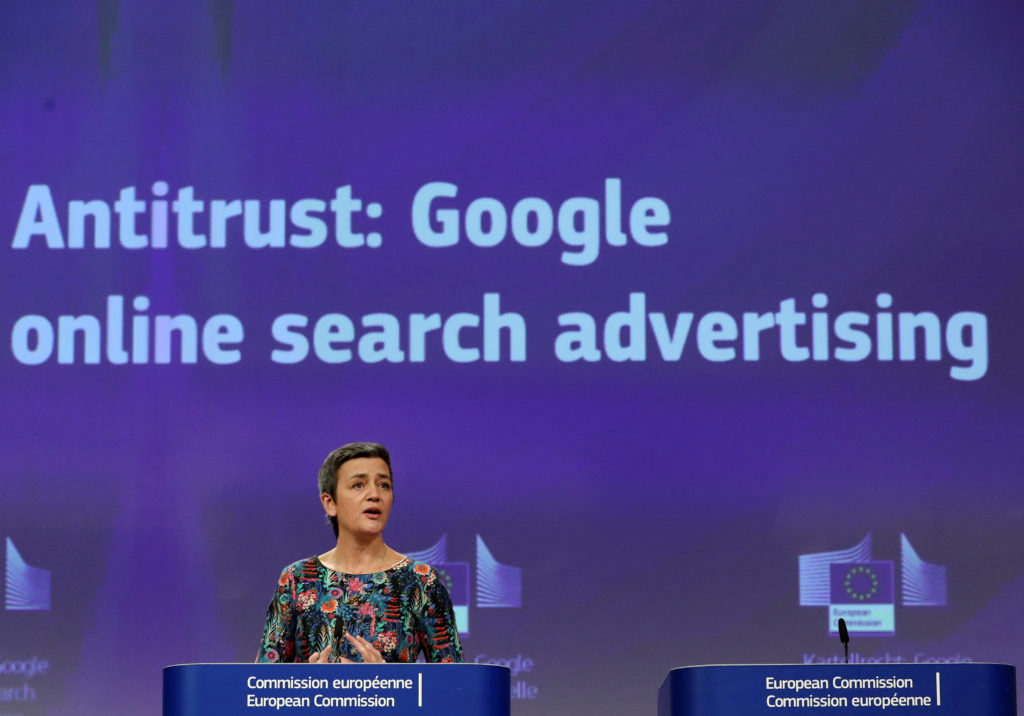 European Competition Commissioner Margrethe Vestager announced a $1.68 billion fine against Google on Wednesday during a news conference at the European Commission headquarters in Brussels. Photo by Yves Herman/Reuters

The commission found that Google and its parent company, Alphabet, breached EU antitrust rules by imposing restrictive clauses in contracts with websites that used AdSense, preventing Google rivals from placing their ads on these sites.

Google “prevented its rivals from having a chance to innovate and to compete in the market on their merits,” Vestager said. “Advertisers and website owners, they had less choice and likely faced higher prices that would be passed on to consumers.”

AdSense is an older Google product that lets web publishers such as bloggers place text ads on their websites, with the content of the ads based on results from search functions on their sites. Microsoft filed an EU antitrust complaint about the service in 2009 and the EU Commission formally launched its probe in 2016, although it said at the time that Google had already made some changes to allow affected customers more freedom to show competing ads.

Last year, Vestager hit the company with a record 4.34 billion euro ($5 billion) fine following an investigation into its Android operating system. In 2017, she slapped Google with a 2.42 billion euro fine in a case involving its online shopping search results.

READ MORE: Why the EU fined Google $5 billion fine for its app policy

Left: A Google logo is seen at the company's headquarters in Mountain View, California. Photo by Stephen Lam/Reuters