Is increasing income inequality a fact or a myth?

You thought income inequality was rising dramatically, right? Well, so did I. In fact, maybe you thought so in part because I and journalists like me have been reporting it as fact, for decades. But maybe we’re wrong — all of us.

That’s the startling conclusion of a new academic paper making the rounds of the economics profession, contradicting conventional wisdom: that incomes of the top 10 percent, 1 percent and especially the tippy-top .1 percent, have been pulling away from the rest of Americans like an iceberg calving in Antarctica. The gap has risen some, says the paper. But nowhere near as much as alleged.

But maybe we’re wrong — all of us.

The paper’s opening paragraph reviews what so many of us thought we knew.

“Previous studies using U.S. tax return data, such as Piketty and Saez (2003), concluded that top one percent income shares increased substantially since 1960,” it begins. No argument there. And what could be more deﬁnitive than huge numbers of anonymous tax returns, exhaustively analyzed?

“But,” authors Gerald Auten and David Splinter continue — and what a big “but” it is — “tax return-based measures are biased.” Biased how?

“By tax base changes and missing income sources,” the authors argue. And the changes and sources make a huge diﬀerence. They continue: “Accounting for these limitations reduces the increase in top one percent income shares by two-thirds.”

Two-thirds? That’s a whole lot of reducing. And the authors, both of them tax experts who have worked for Congress under Democrats and Republicans alike, don’t stop there. 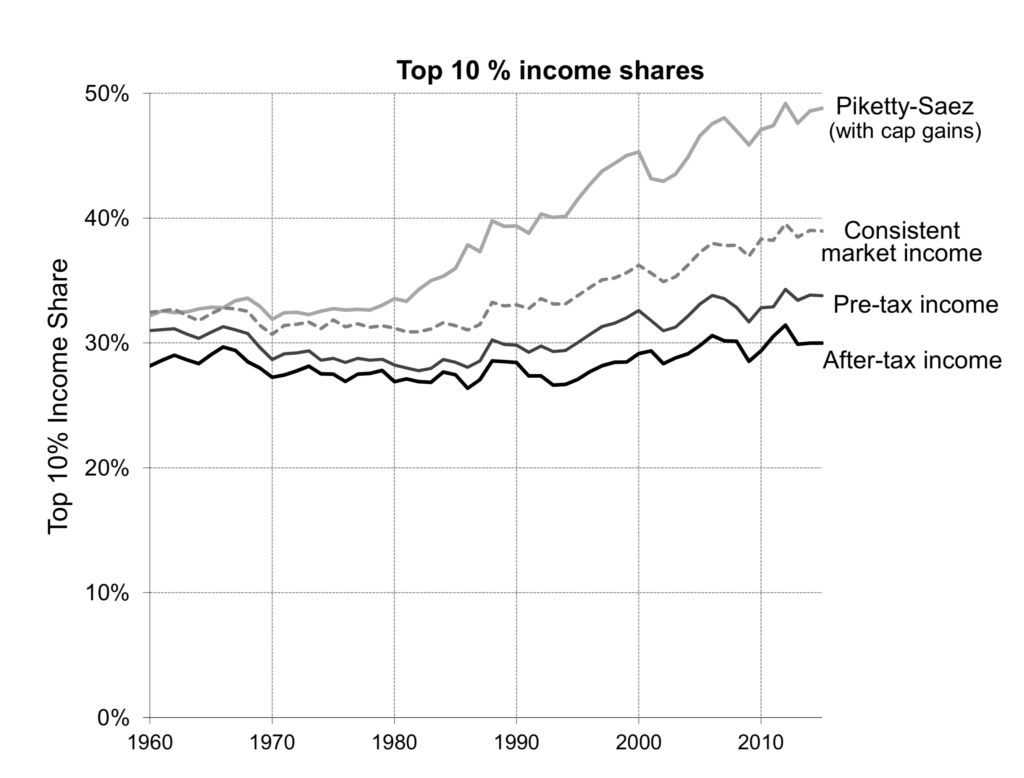 Here are a few of the paper’s charts that illustrate, graphically, its unconventional ﬁndings, after accounting for the prior data’s “limitations” and making adjustments. 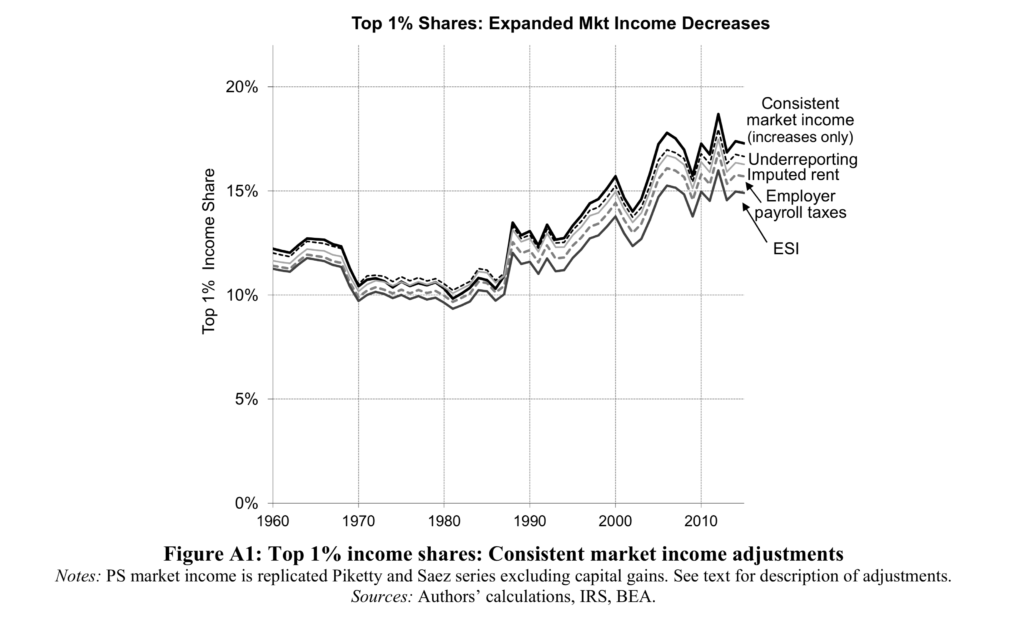 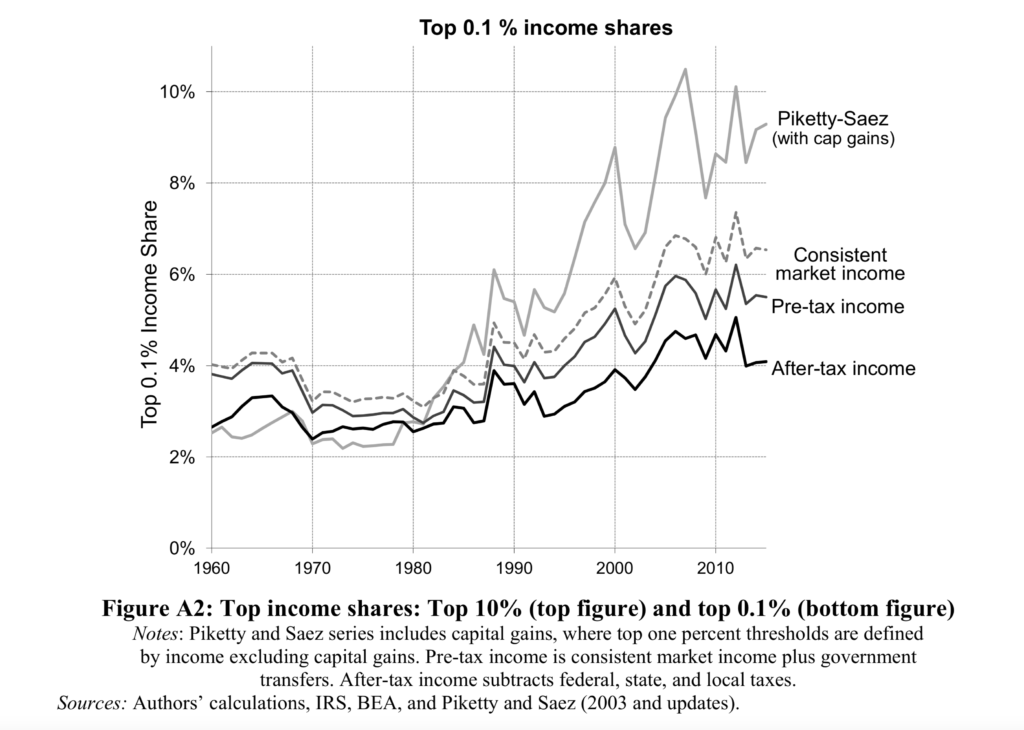 And thus the big takeaway:

“This shows that unadjusted tax return based measures present a distorted view of inequality.” Distorted, that is, to overemphasize inequality. (Some of the adjustments the authors make are quite technical.)

But what to make of a radical — and radically controversial— adjustment to the conventional wisdom on growing inequality? I queried a number of the tax experts I’ve come to know over the decades.

One tax professor friend considered the question so politically sensitive that he asked not to be quoted by name after having put it to me this way in an email when I asked if the research held up:

“There is a widespread public perception that the distribution of income and wealth has become so much more unequal, a consensus so strong that no one is really allowed to question it in public.”

This is why my friend prefers to remain anonymous. But he is hardly alone in his opinion, if not his diﬃdence. As University of Michigan economics professor Jim Hines wrote, regarding his tax researcher colleagues, not only is the paper “rather famous in my world; people think it is basically right — and I might add that I think it is right.”

And sure enough, another noted tax professor echoed his remarks, on the record.

“[The study] is very carefully done,” said the Joel Slemrod, a colleague of Hines’ at Michigan. “All of the changes it makes to the Piketty-Saez methodology are reasonable, although sometimes debatable.” (None of these professors, by the way, are right-wing economists.)

And here’s non-partisan tax scholar Eugene Steuerle of the Urban Institute, who has appeared on this page before.

“I think it is an excellent piece of work,” he wrote of the paper, adding that the Congressional Budget Oﬃce has also just released its latest estimates of the distribution of income, adjusted for government transfer and taxes. The CBO paper is here: 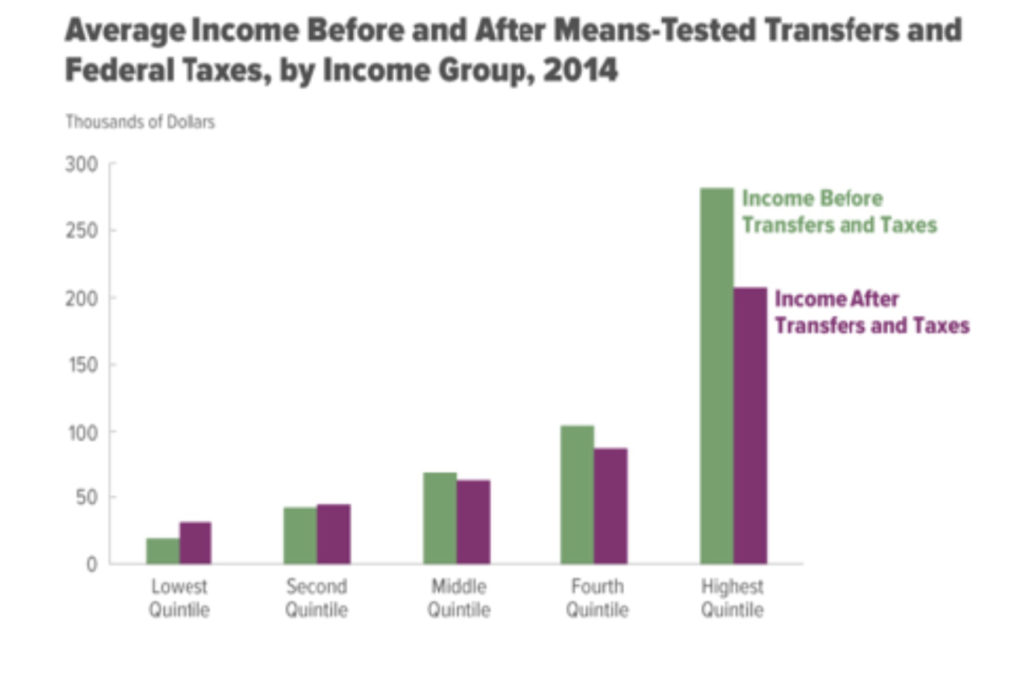 In 2014, average household income before accounting for means-tested transfers and federal taxes was $19,000 for the lowest quintile and $281,000 for the highest quintile. After transfers and taxes, those averages were $31,000 and $207,000. Chart by the Congressional Budget Office

Now for someone who’s been reporting a widening cleavage for decades, my ﬁrst reaction, after reading the paper and the broad, expert support for it was: yikes. The natural next question, of course: do the authors make the adjustments correctly? The answer seems to be a plausible yes.

If some of the adjustments are pretty technical, others are quite easy to understand. They are also quite open to debate. Would you include transfer payments like housing vouchers, food stamps, Medicare/Medicaid and the like — and even Social Security — in reckoning income and its inequality? Economist Robert Lerman said we most certainly should — in a Making Sen$e segment broadcast back in 2011, responding to a story in which I had reported on widening inequality. To people with whom I talked after the story aired, including at least one passionate “progressive,” Lerman made a persuasive case. (You are, of course, encouraged to judge for yourself.)

But here’s Eugene Steuerle with a warning about making the “adjustments” an article of faith.

Now for someone who’s been reporting a widening cleavage for decades, my ﬁrst reaction, after reading the paper and the broad, expert support for it was: yikes.

“It’s still fairly clear,” Steuerle writes, “that the before-tax, before-transfer distribution of income has become signiﬁcantly worse. That’s important if you want to examine such issues as options and power in society. (It also correlates somewhat to what is happening to the wealth distribution, which is usually estimated with respect to ownership of private, not public, assets such as entitlement beneﬁts.)

“Since total health costs now average about $25,000 per household, it’s easy to have cash-poor families whose ‘income’ rises to a lower-middle income level because of the addition of Medicaid or employer-provide insurance, but who still can’t aﬀord to live a decent lifestyle.”

Having learned over the eons to be deeply skeptical of any given piece of research, however, especially one that hasn’t been replicated, I had one other question: How seriously to take the numbers, given that the more dramatic the results, the more publishable they are.

“Have you met Gerry Auten?” cracked professor Hines. “He’s just not the kind of guy who has an agenda, unless getting all the columns in his spreadsheet to add up counts as an agenda.”

Of course, the paper is controversial, in that it pits the authors against two very prominent economists, Thomas Piketty and Emmanuel Saez. (You can watch or read Piketty’s take on inequality in an interview I did with him here. For all their eminence, though, my shy tax professor/friend’s bottom line is clear: “Incomes have become more unequal since the 1970s, though not nearly to the extent that advocates would have people believe.”

“The addition of transfers and removal of taxes has made the after-transfer, after-tax, measures of income more equal and oﬀset much of the growing disparity on the before-tax, before-transfer, side.”

But Steuerle ended his response with this warning to me and other journalists:

“I would be careful trying to pick a winner among researchers. The media is attracted to conﬂict and stories of everything always getting worse, but summary statements, even corrections of past statements, can easily mislead. In truth, we should ﬁnd out where things are getting worse, but with a precision that allows us to think about who is winning and who is being left out, and whether policies have aﬀected and can adjust to those factors.”