Column: What’s being left out of the Medicare for All debate

Amid all the talk of reforming health care, the soaring cost of that care is the elephant in the room that has received little serious attention.

The nuclear option favored by Sen. Bernie Sanders and, until recently, Sen. Elizabeth Warren, would do away with private health insurers and provide universal care. The price tag would be enormous, although the money would go toward more generous coverage benefits, instead of insurer profits, administrative expenses, marketing campaigns and lobbying efforts.

Other proposals to increase the number of people covered by Medicare range from extending coverage to those younger than 65, or even a public option — letting anyone buy Medicare coverage. There is, however, very little discussion of how the government and the American public would pay for such expansions.

People do seem to understand that health care providers typically charge less for services under Medicare than under private insurance, but there is little public understanding that Medicare is already heavily subsidized by taxpayers and that more red ink would accompany any expansion. Of course, we can raise taxes to pay for expanded Medicare, but the topic of higher taxes is not a big winner on the campaign trail.

Neither is discussing the substantial limits of Medicare. Basic Medicare, for example, only covers 80 percent of the costs of doctors, medical equipment and outpatient services, including the rising use of outpatient surgical centers.Basic Medicare also does not cover most dental, hearing and vision needs. And no part of Medicare – neither basic Medicare or private Medicare Advantage plans – covers the long-term care expenses that loom large in the futures of a growing population of aging Americans.

Overall spending nudged up to $3.6 trillion from $3.5 trillion in 2017 — not a very dramatic news headline. But even though the increase appears modest, the 4.6 percent rise in national spending continued to outpace the rate of general inflation.

Most of the nation’s health care bill is effectively hidden from consumers. A big chunk is paid by employers … and the lion’s share is paid by the government”

Health spending is approaching 18 percent of the entire economy – as measured by gross domestic product (GDP) – and is roughly twice as high per person in the U.S. as in any other developed country.

If the U.S. could reduce how much it spends on health, imagine the other priorities that could benefit, politics willing: infrastructure, alternative fuels, pollution abatement, education, etc.

Yet, when it comes to health, the debate over reform is about providing health insurance to more people, not whether we can afford to do so. In large measure, this is because the loudest voices in health care are the ones whose pockets are being stuffed with all those health care dollars.

With that, here is a summary of 2018 personal health care spending. It’s less than overall spending because it doesn’t include research and other investment expenses. (You can compare it with 2017 spending here.) 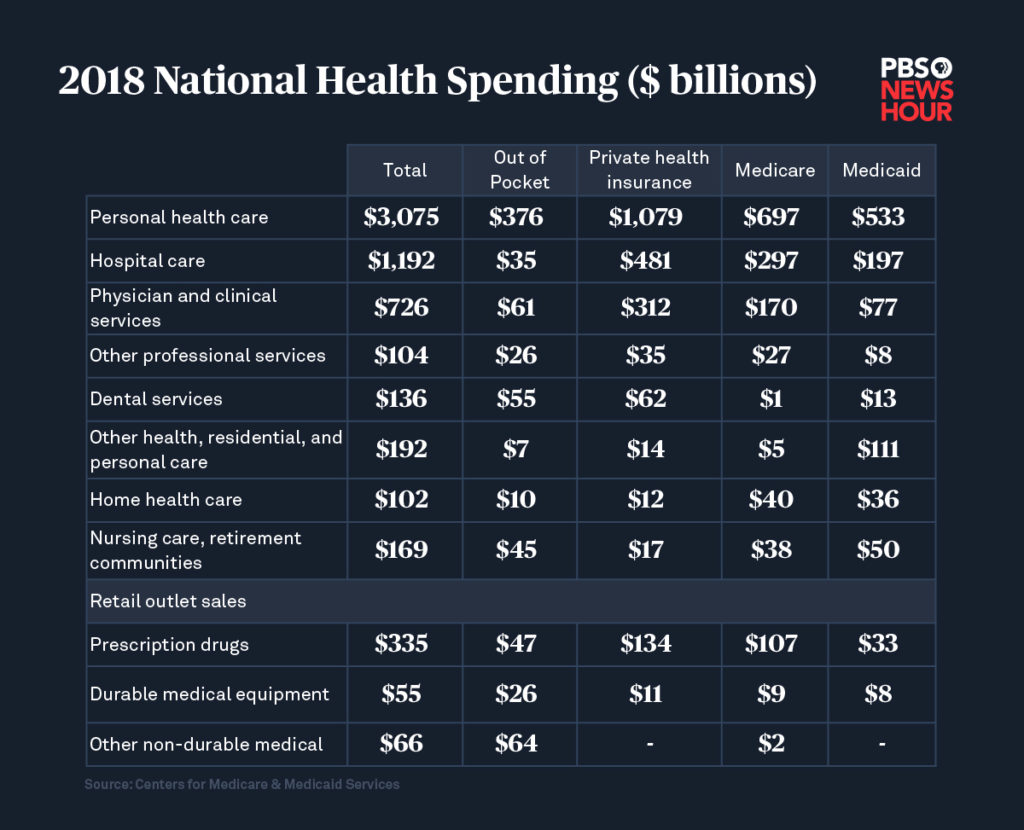 Looking at these numbers, I’d draw your attention to the fact that out-of-pocket spending is only an eighth of overall spending — $375.6 billion out of $3.1 trillion. This doesn’t include what we spend on insurance premiums, but it is the variable amount that is due to the bill collector at the end of the month. It is the financial pain we feel.

However, most of the nation’s health care bill is effectively hidden from consumers. A big chunk is paid by employers for providing employee health coverage, and the lion’s share is paid by the government in the form of subsidies for Medicare and Medicaid, including hefty payments to drug companies for Medicare prescriptions.

Consumer out-of-pocket spending was only 8 percent of the health expenses for physicians and clinical services — $61.2 billion out of $725.6 billion. The true price tag for hospital spending is almost completely hidden from patients, who directly spent less than 3 percent of the total hospital tab — $34.8 billion out of nearly $1.2 trillion.

Consumers already are upset about high drug prices and growing difficulties paying for health care. Imagine how they’d take to the streets – or perhaps the voting booth — if they knew the real size of their health care bill.

Should the federal government be able to negotiate the prices of prescription drugs?