The U.S. economy grew by a rate of 3.2 percent in the first three months of 2019, according to initial data released Friday by the Commerce Department. The rise in real gross domestic product outpaced expectations and could tamp down fears of an impending recession.

But lackluster consumer spending, and the fact that the growth was pushed higher by unsustainable investments in business inventory, have some economists saying GDP growth will likely dip later this year.

Economists had predicted the federal government shutdown and bad winter weather would be a drag on first quarter growth, which many estimated would be around 2.3 percent.But the rise in business inventory investments, as well as increased exports and state and local government spending, pushed the nation’s GDP higher than predicted.

The Commerce Department said the 35-day government shutdown, which ended in February, did offset some growth, as did slower growth in consumer spending.

Still, the strong GDP numbers could ease fears that the U.S. could be headed for a recession in the near future.

“The reality is the U.S. economy is ready to go through that finish-line tape this summer and break through to the longest expansion in history,” said Mark Hamrick, a senior economic analyst at Bankrate. 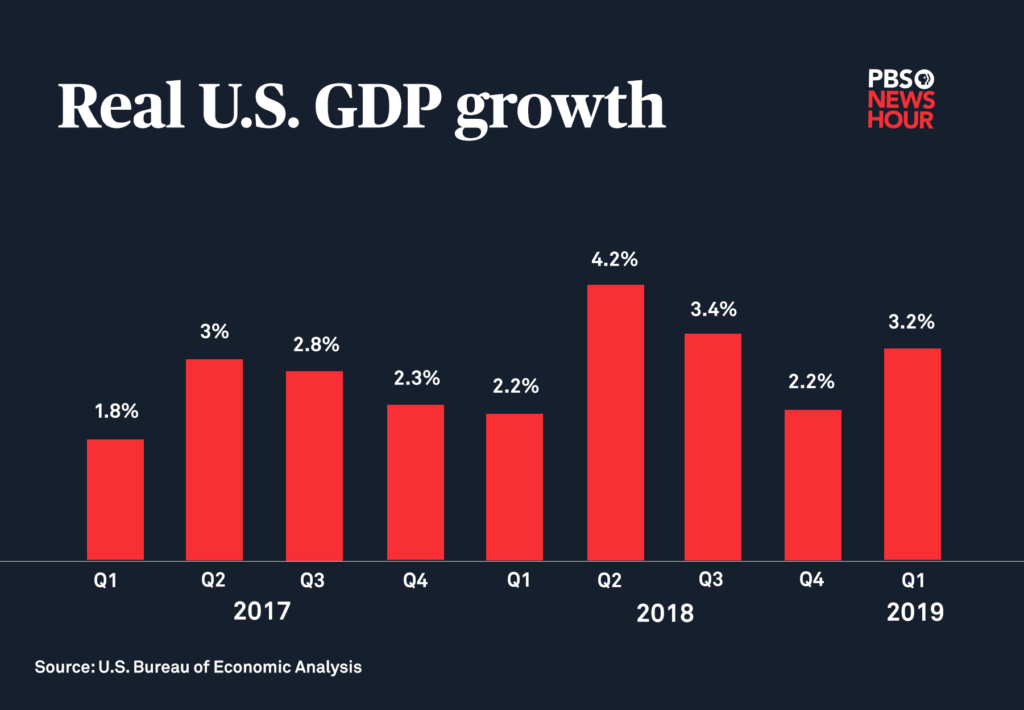 The first quarter figures could come as a relief to investors after fears of a recession and worries about the U.S.-China trade war caused the stock market to hit record lows in the fourth quarter of last year. All three major indices have since recovered their losses, and the S&P 500 hit a new record high this week.

The economy waned in the final months of 2018. In the fourth quarter, GDP growth dropped to 2.2 percent, down from 3.4 percent in the third quarter and 4.2 n the second quarter of 2018. Economists largely attributed the robust growth earlier in the year to the 2017 tax overhaul.

Economists have estimated the U.S. economy will grow 2.4 percent overall in 2019. Despite the first quarter GDP growth, some said the underlying data indicates those predictions might not change.

One of the main factors holding back expectations is consumer spending. It accounts for about 70 percent of the U.S. economy but only grew at a rate of 1.2 percent, the weakest since the first quarter of last year.

“You need that part of the economy to be growing at a rapid pace to keep the whole economy going,” said Dan North, the chief economist at Euler Hermes North America.

Analysts are also keeping a close eye on the world economy, which could have a negative pull on U.S. growth. The International Monetary Fund recently cut its forecast for global GDP growth from 3.5 percent to 3.3 percent this year.

The data released Friday are preliminary numbers. The government will release more complete data at the end of May.

Left: A U.S. flag is seen at full mast atop a polyurethane plant in Geismar, Louisiana. GDP growth in the first quarter of 2019 was driven in part by increased business investment. Photo by Jonathan Bachman/Reuters

In Louisiana, are billions of dollars in corporate tax exemptions paying off?