While a majority of Americans say their personal finances are about the same or better than they were a year ago, most in the U.S. feel they have had to cut back on spending in at least one way over the last six months, according to a new PBS NewsHour/NPR/Marist poll. And in the past year, as inflation has risen at its fastest rate in four decades, more than one in three Americans say their personal finances have gotten worse.

Among U.S. adults, 45 percent say their finances haven’t really changed, and another 18 percent said their situation actually improved compared to last year. But 37 percent said they have taken a hit. 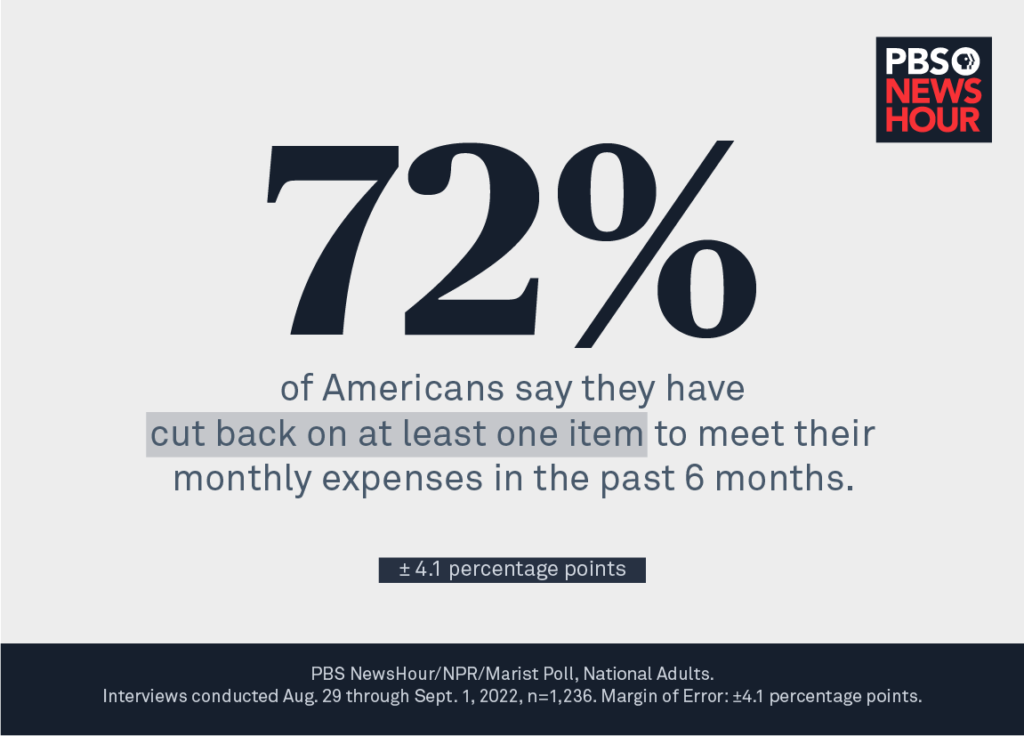 The inflation report for August, released Tuesday, showed prices rising 8.3 percent year over year – lower than the increases seen in July and June but higher than analysts expected, dampening hopes that prices might be moderating. While the labor market remains strong, with an unemployment rate of only 3.7 percent and some recent wage gains, hourly earnings adjusted for inflation are down nearly 3 percent from a year ago. Though people with lower incomes were more likely to see wage growth offset higher prices, for many, pay raises have not kept up.

Pete Medina, a 57-year-old manager in the construction industry, said his personal finances have worsened over the past year. His household income has stayed the same, but “the cost of gas, my electricity – everything has gone up,” he said, and it’s eaten into his savings.

He and his wife have two grown children. One lives with them, along with his father-in-law. They were looking at buying a new house about an hour away from their current home in West Palm Beach, Florida, but with their incomes, they figured they wouldn’t be able to afford it. And, Medina said, they’re putting off vacations to stretch their budget more. 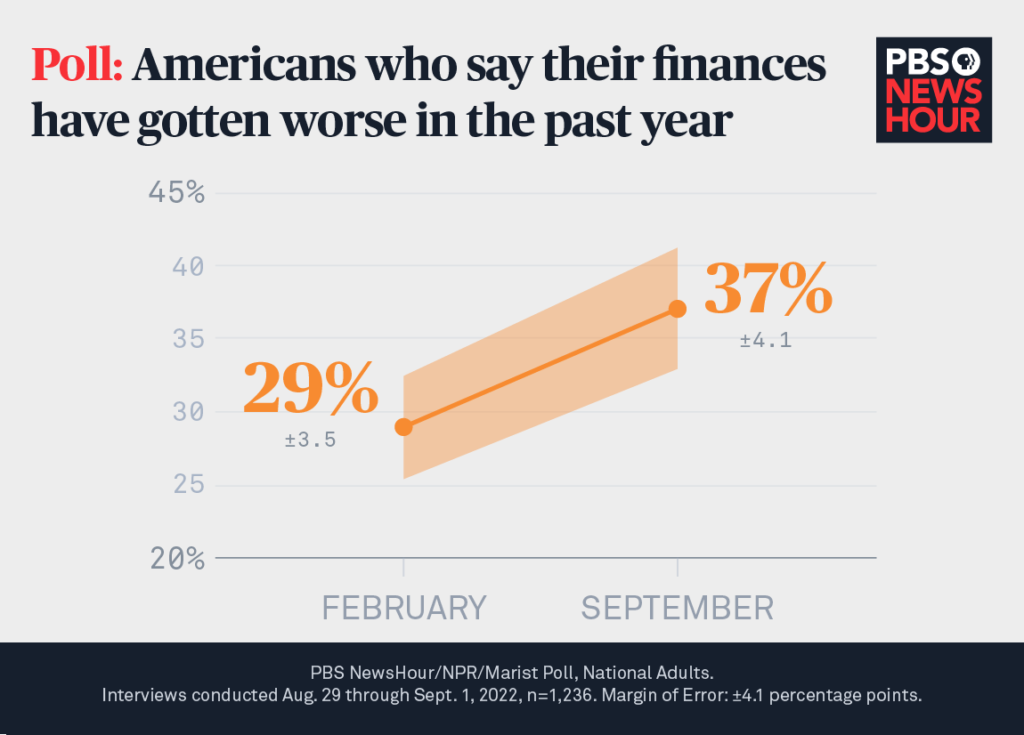 “We did have plans on a nice trip up to the north East Coast this October, which we have now postponed until we can figure things out,” he added.

Medina is among the 54 percent of Americans who also say they have eaten out less to meet their monthly expenses, while 40 percent said they cut back on driving to save money on gas. While prices have fallen from a national average high of just over $5, the price of gas is around $3.70 a gallon, more than 50 cents more expensive than last year, according to AAA.

WATCH: How the pandemic led to a significant decline in child poverty

Republicans, at 82 percent, are far likelier than Democrats, 58 percent, to say they’ve cut back on at least one item in the past six months. That could be a reflection of how each party views the economy, said Lee Miringoff, who directs the Marist Institute for Public Opinion.

Democrats who are more bullish about the party in power are more likely to view the economy as strong, Miringoff suggested, while Republicans might be tightening their belts more because “they’re more gloomy about the state of the economy.” 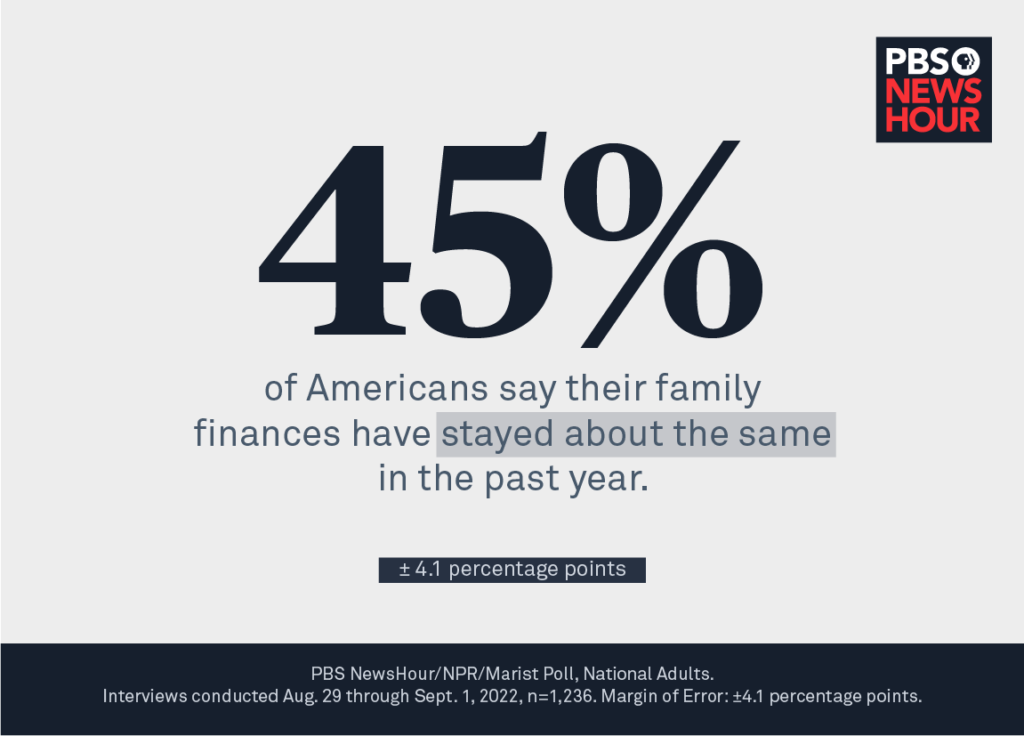 “Because the Republicans are mostly the ones concerned about inflation, they’re also the ones who then talk about their personal finances getting worse,” he said, and might be cutting back on things that are not necessities.

But Americans aren’t only forgoing non-essential spending. While 18 percent of respondents said they have skipped paying bills like rent, credit card payments or medical expenses, that number jumps to more than 25 percent for households who make less than $50,000 annually.

“Inflation has continued to sink in and the tax cut kind of went away….You can see why there is a generally sour mood.”

To Austan Goolsbee, who chaired the Council of Economic Advisers under President Barack Obama and currently teaches economics at the University of Chicago, the percentage of people who say they’re worse off financially now than they were a year ago is actually lower than expected.

More than six in ten Americans believe the U.S. is in a recession right now, far more than the one in three who say their personal finances have gotten worse over the past year. That makes sense, Goolsbee said, since last year many people were receiving federal assistance from expanded child tax credits and stimulus payments.

“The average family got a $3,500 tax cut from the [American] Rescue Plan. Inflation has continued to sink in and the tax cut kind of went away,” Goolsbee said. “You can see why there is a generally sour mood.” 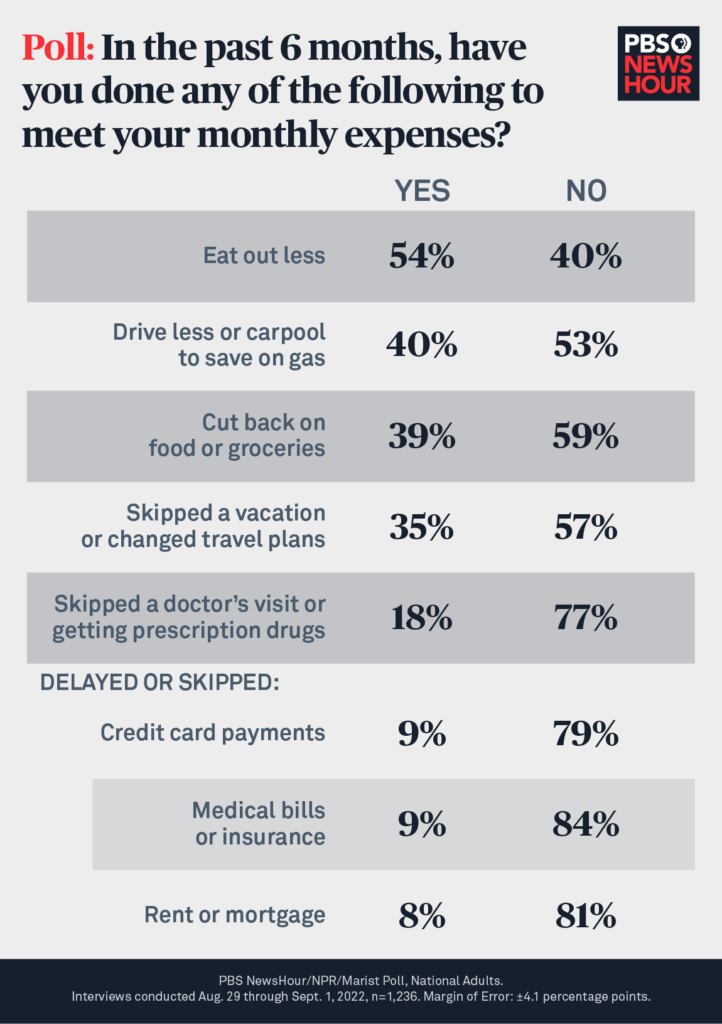 This burden is felt disproportionately, with many more lower-income households reporting their finances have gotten worse than those with higher incomes.

READ MORE: What polling does — and doesn’t — tell us

That makes sense with where the nation is in its financial recovery, said Damon Jones, associate professor at the Harris School of Public Policy, University of Chicago. While lower-income people have seen their wages rise faster than middle- and high-income people, there are other mitigating factors that might drag their personal finances down.

“Inflation in general is going to be harder to get around if you don’t have the ability to shop around, or to scale back on luxury items or dip into savings. So that’s going to disproportionately affect lower-income people,” Jones said.

“They count every dime.”

Wealthier people tend to invest their money, and many people’s wealth is also tied to their home, Jones said. Middle- and higher-income people could see personal finance concerns grow if the housing or stock markets start to suffer.

Dale Dollahite and her husband are both retired, living on a fixed income, and they need to be prepared for health care costs and catastrophic illnesses as they age.

To save, she’s been driving her 13-year-old hybrid car instead of her small SUV. The sedan gets substantially better gas mileage, she said, and the price of fuel where she lives in San Jose, California, hit more than $6 a gallon in July, before dropping to just under $5 now.

But, she said, “We’re not a couple raising a young family. We’re not in the acquisition phase of life,” making substantial purchases. So while Dollahite has noticed inflation in everyday items such as gas and groceries, they are able to absorb the increases.

With three grown sons and 15 grandchildren, she and her husband have instead reached out to help, since she knows her sons’ families finances are tight.

“They count every dime,” she said.

Left: Since February, the number of people who say their personal finances have gotten worse has grown, according to the latest poll. Photo by REUTERS/Caitlin Ochs