Tatum Johnson was hooked on the view from Clemson University’s North Green soon after she set foot on the South Carolina campus for a tour as a high school senior.

The stretch of grass overlooking the amphitheater, Reflection Pond and library “is pretty breathtaking,” she said. The botanical gardens were a boon, too. “I mainly go there to see the wildlife. There are a few duck ponds and a butterfly garden and a lot of squirrels.”

The campus and Clemson’s academic reputation sealed the deal for Johnson to enroll, despite its higher cost compared to other public universities she was considering.

A focus on debt may be discouraging some students from assuming more of it, even if they have the capacity to pay it back.

Now it’s Clemson’s price tag, rather than its scenery, that’s top of mind for Johnson. A junior who received the full $6,095 a year allowed under a federal Pell Grant — for which she qualifies based on her family’s low income — she was still short of what she owes by about $6,000, and government limits meant she was maxed out on what she could borrow in federal student loans.

While much attention is being paid to high student debt, a growing chorus is making the surprising argument that students need to be allowed to borrow more. With grants limited and college costs rising, loans can be a lifeline for students who have no other way to afford a degree.

READ MORE: Some colleges are totally unaffordable, and this tool proves it

Johnson would gladly take on more federal loan debt, but can’t. The cap on how much students can borrow in federal loans hasn’t budged in over a decade even as the sticker price of tuition, room and board at public universities has shot up 30 percent in that time. But undergraduates can borrow only up to $7,500 a year and no more than $31,000 for their entire time in college. (Students who are no longer dependent on their parents can take out more.)

To make up the difference, Johnson’s parents have borrowed $12,000 for her sophomore and junior years through the Parent PLUS program, another kind of loan that has come under increased scrutiny because it is indebting parents.

Johnson would rather borrow more in her own name than have her parents take out loans, she said. “And I think it would help a lot of students in similar situations as well.”

A focus on debt also may be discouraging some students from assuming more of it, even if they have the capacity to pay it back from the higher incomes they can typically expect with university degrees, many advocates say.

“I do get really concerned because I think students are getting really nervous about borrowing. And I’m like, listen, you should be more concerned about graduating,” said Rachel Fishman, deputy director for research on education policy at New America, a Washington think tank. “Because the people who struggle with borrowing are the people who don’t graduate.”

What’s clear is that the financial aid now being given to students isn’t enough to cover the growing cost of college. The aid offered to a sample of 11,000 students fell short by $12,000, on average, of covering what they’d have to pay, even after accounting for every possible grant and federal loan, according to an analysis by New America. For in-state students at public universities, the figure was $8,400.

Student loans could cover that gap. And unlike private loans to which many students are forced to resort when they hit the federal limit, direct federal loans for undergraduates come with safety valves including the ability to cap repayment based on how much borrowers earn after college.

Many experts, including Fishman, also have been calling for more grant aid for students to avoid loans. But a massive increase in the Pell Grant, the principal federal financial aid for needy students, seems unlikely. The maximum Pell Grant for students has increased by just a few hundred dollars since 1978 when adjusted for inflation, according to the College Board. For decades, the value of the grant actually declined.

“It’s so hard politically to expand anything that is just grant aid to low-income individuals,” said Fishman.

The National Association of Student Financial Aid Administrators (NASFAA) supports lifting the federal student loan cap. It’s a proposal the organization hopes Congress takes up as lawmakers seek to reauthorize the Higher Education Act, the main collection of laws covering national higher education policy. Whether the White House backs such a move is an open question. The Trump administration released a wish list in March that included a cap on certain kinds of federal loans.

Middle-class students who aren’t eligible for federal aid such as the Pell Grant could benefit the most from seeing the cap on borrowing lifted, said Karen McCarthy, director of policy analysis for the association. She called them “some of the most vulnerable, because they do not have any of that grant assistance to help backfill their need as well.”

As part of its proposal, NASFAA wants to see the cap on undergraduate student borrowing raised, but would rely on colleges to lend less to certain students, such as those who are part-time or pursuing academic programs with limited market value. “The details would need to be worked out on what has to happen here,” said McCarthy.

Colleges would likely sign on to the idea, since they’re increasingly being judged on the proportion of their students who default on their loans.

“We’re seeing an inter-generational debt occur” as more parents are saddled with education debt alongside their kids.

Another proposal by the Higher Education Loan Coalition would double the annual amount undergraduates could borrow, from $7,500 to $15,000. Under this idea, a student in an associate degree program could borrow up to $30,000; students seeking bachelor’s degrees, could borrow $75,000. To discourage over-borrowing, the plan proposes limiting how much first- and second-year students could take out.

One other option for students whose financial aid falls short of college costs is to work while earning their degrees. But research shows that often defeats the purpose. Working more than 15 hours a week can lead to worse academic outcomes, including higher dropout rates.

Johnson, who works 20 hours a week at that university’s financial aid office, said she wouldn’t work more. “I definitely could, but my grades would definitely suffer if I did.”

She also feels responsible for the debt her parents have taken on to underwrite her education, however, and plans to help them “as much as possible” once she graduates.

Fishman, of New America, is troubled that parents of Pell recipients are allowed to borrow PLUS loans at all. “We’re seeing an inter-generational debt occur” as more parents are saddled with education debt alongside their kids, she said.

Between 2007 and 2016, the share of dependent students whose parents took out these loans increased from 9 percent to 12 percent at public universities. The average loan balance has grown by $2,300, to $12,800 in that time, according to the College Board.

Parents of students like Johnson whose low incomes qualify them for the full Pell amount typically can’t afford to pay anything for their children’s educations. But federal lending rules say that as long as parents don’t have a negative credit history, they can borrow thousands of dollars through the PLUS program.

READ MORE: Switching majors is adding time and tuition to the already high cost of college

A paper Fishman wrote argues that, among other things, parents this poor shouldn’t be allowed to borrow PLUS loans. Instead, it said, their children should be allowed take out up to $12,500 a year — the same amount as independent students who don’t rely on their parents.

Isabelle Maraschi’s parents couldn’t even qualify for the relatively low requirements to get a PLUS loan. 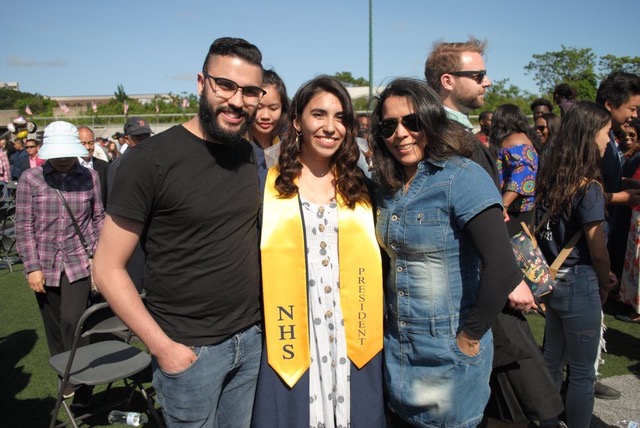 Isabelle Maraschi with her brother, Fabio Maraschi, and mother, Celia Maraschi, at her graduation ceremony from Malden High School in Malden, Massachusetts, in 2018. Photo by Caio Barbosa

While the federal Pell Grant and state aid chipped in $8,100 for her spring semester college costs, the first-generation freshman who grew up speaking Portuguese still owed more than $7,600 to the University of Massachusetts at Amherst, where she’s studying biochemistry.

Her mother, a house cleaner who immigrated from Brazil 24 years ago, helps out when needed.

Instead of PLUS loans, Maraschi tapped an outside scholarship in addition to a work-study job and the federal loans she was allowed to take out. But that scholarship runs out by her junior year, leaving her with anxiety about how she’ll find the money to stay in school after that.

One plan is to work more in the summers. Another is to vie for a resident assistant job on campus that comes with discounted housing. But though debt frightens Maraschi, she’d welcome the chance to borrow more. “I am able to rely on loans,” she said. Chasing scholarships and jobs means “you’re not sure if you got it or if you got the highest amount.”

Securing more loan dollars would give her extra time to study and have a better sleep schedule.

This story about student loan debt was produced by The Hechinger Report, a nonprofit, independent news organization focused on inequality and innovation in education. Sign up for our higher education newsletter.

Mikhail Zinshteyn wrote for Ed Source and contributes regularly to The Hechinger Report and The Atlantic. His writing about education has also appeared in FiveThirtyEight, The National Journal, CityLab and other outlets.