More Americans are worried that novel coronavirus is spreading in their communities, as schools shut down and states order closures in an effort to stifle the pandemic.

Seventy percent of Americans said they worry that novel coronavirus is escalating in their cities, towns and neighborhoods, according to the latest PBS NewsHour/NPR/Marist poll. That’s up from 44 percent on Feb. 4, according to prior polling.

Americans were split in their support of the Trump administration’s handling of the coronavirus pandemic. Nearly half — 49 percent — said they disapproved, while another 44 percent said they approved of how the White House has managed what Trump on Friday declared to be a national emergency, freeing up $50 billion for state and local government response in addition to Congress approving $8.3 billion. 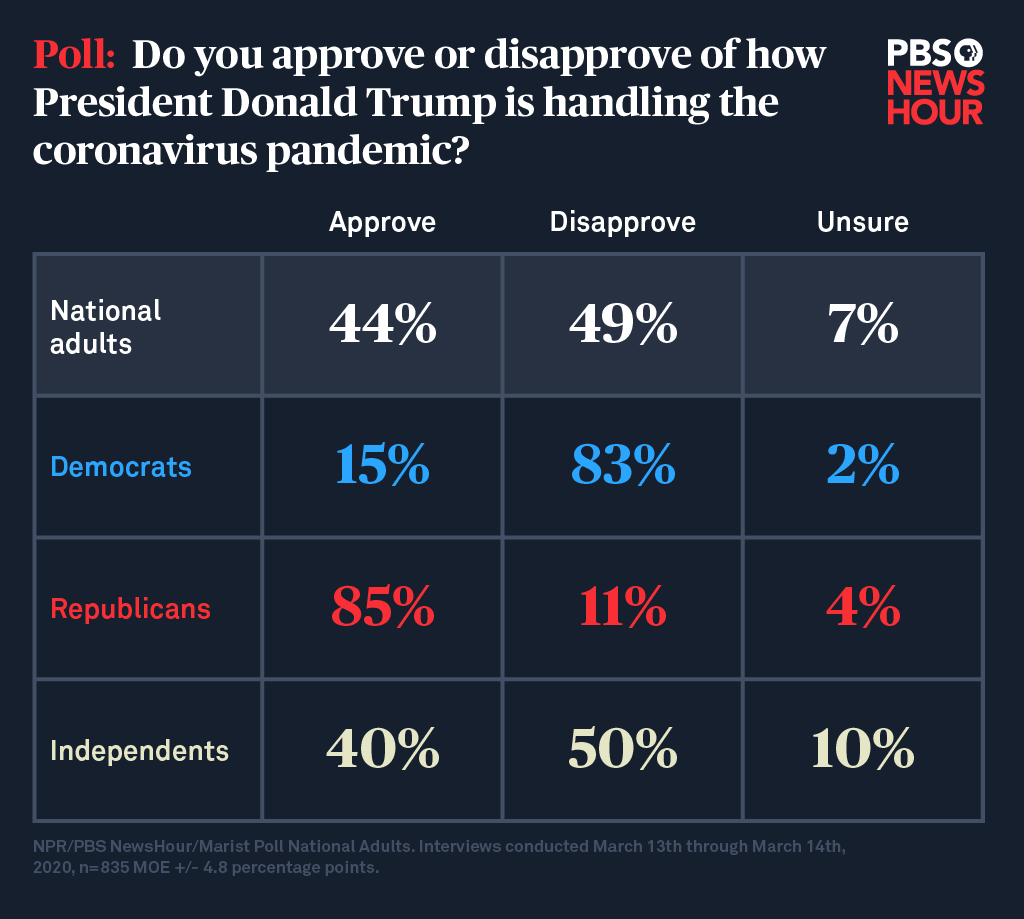 In this latest poll, Democrats were most likely to say they felt threatened by the virus, at 76 percent, followed by half of independents and 40 percent of Republicans. That comes after weeks of the White House downplaying the public health crisis, contradicting its own administration experts.

On Monday, after the poll was conducted, President Donald Trump offered grave guidance on the virus, striking a more somber tone and saying the virus could disrupt the country until August. Shortly thereafter, the White House launched a public service campaign to help slow the spread of the virus.

“It’s desperately important for us to not politicize this health crisis.”

“It’s desperately important for us to not politicize this health crisis,” said Dr. Lawrence Gostin, who directs the World Health Organization Collaborating Center on National and Global Health and the O’Neill Institute for National and Global Health Law. “If there were ever a time in the modern political history of America, where we’re so divided, where we would come together and politics wouldn’t matter, now is that time.”

Having a consistent message during a public health crisis

Americans trust what public health officials and state and local governments say about novel coronavirus far more than they trust the news media or Trump, according to this latest poll. 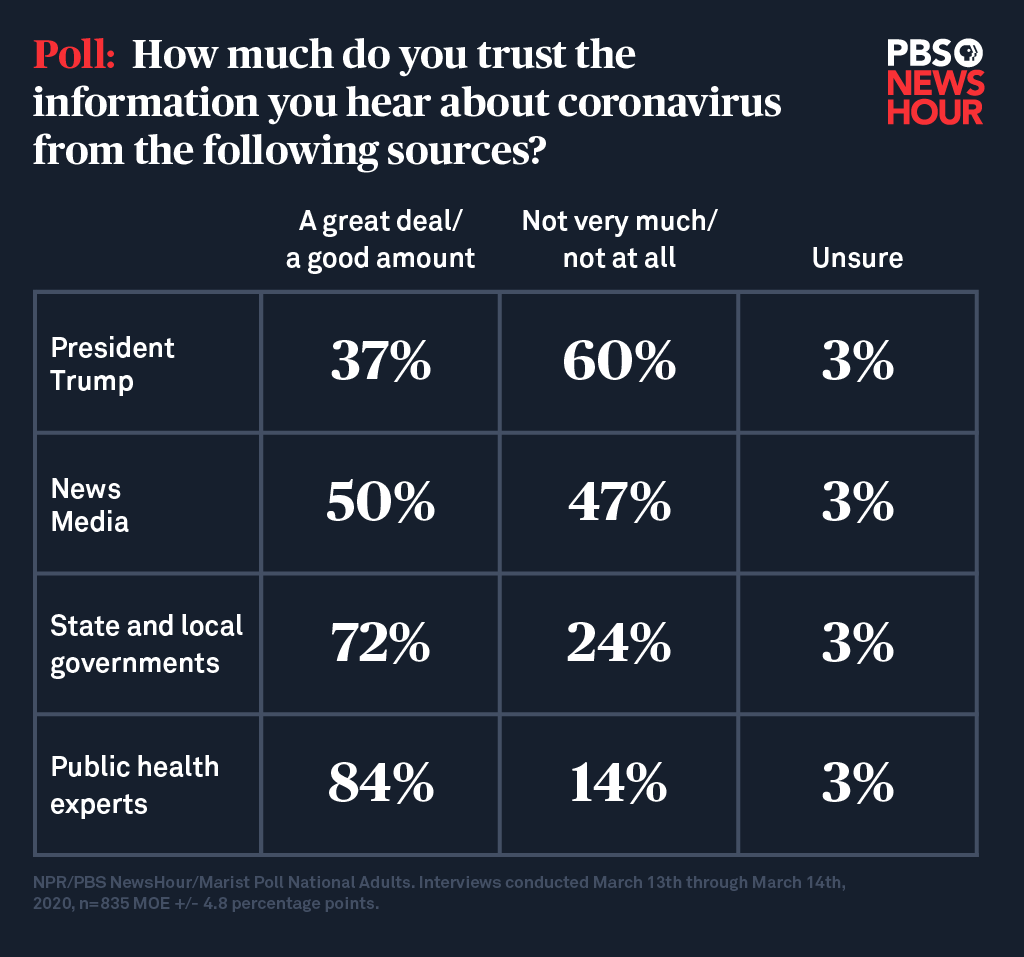 It’s vitally important that Americans hear consistent messages about the threat they face and what they should do right now, said Dr. Matthew Seeger, a professor of crisis communication and dean at Wayne State University who works with the WHO to develop guidelines for emergency risk communication.

“When we have inconsistent messages, that reduces credibility of sources and leads to propagation of rumors,” Seeger said.

Because this novel coronavirus emerged only a few months ago, there is uncertainty about how this virus will behave, who will get sick and what will happen next, Seeger said. To clear the air, Seeger recommended that leaders yield to subject matter experts to provide guidance to the public.

By and large, the public is logical and rational, he said. If leaders give good information, are transparent, tell people what they know and what they don’t, and avoid being overly reassuring, Seeger said, “Those really help us do the right thing.”

On Feb. 27, when U.S. public health officials had identified a handful of cases of COVID-19, the disease caused by the novel coronavirus, Trump downplayed the virus’ potential and suggested cases would drop “down to close to zero.”

“When you have 15 people, and the 15 within a couple of days is going to be down to close to zero, that’s a pretty good job we’ve done,” Trump told reporters during a briefing of the White House Coronavirus Task Force, led by Vice President Mike Pence.

Less than a month later, the landscape has shifted dramatically. There are at least 3,487 confirmed cases in the U.S., and at least 68 people are known to have died from the virus, according to the Centers for Disease Control and Prevention. Because diagnostic testing has been inadequate nationwide for weeks, public health officials say federal data undercounts cases and it is likely that many more people are sick.

As recently as Sunday, conservatives, including Rep. Devin Nunes, R-Calif., and former Milwaukee County Sheriff David Clarke Jr. encouraged people to go out to eat or shop if they were healthy. That message contradicts advice from public health officials that Americans should practice social distancing (stay home and avoid public spaces, gatherings with more than 10 people, or interaction with people outside their households) to prevent the virus from spreading.

That guidance has led states and cities to close schools, bars and restaurants and workplaces and when possible to have employees work from home to slow down the virus. On Sunday, the CDC urged event organizers nationwide to cancel or postpone gatherings of 50 people or more for the next eight weeks.

“This is the defining global health crisis of our time.”

The reason social distancing is so important: populations who are particularly vulnerable to the virus — older people and those with compromised immune systems — have a better chance of staying well. To help reduce direct transmissions, social distancing will also lessen the likelihood that the nation’s health care system becomes overwhelmed when a surge of illness sends people to hospitals and clinics in need of medical help. (An overwhelmed health care system was part of what made it so difficult for Italy to address their own coronavirus outbreak). Roughly half of Americans — 48 percent — said the virus prompted them or someone in their household to cancel plans to avoid crowds, according to the poll.

“We have an invisible enemy that a month ago, nobody thought about,” Trump told reporters on Monday.

“This is the defining global health crisis of our time,” WHO Director-General Dr. Tedros Adhanom Ghebreyesus said Monday, urging more countries to test so they can gain a better sense of how many people need help.

What can you do right now?

Because this coronavirus is new, human immunity has not developed to fend it off. Researchers are still several months away from having a vaccine and medication designed to combat the spread of COVID-19 ready to distribute. That is why public health strategies, like social distancing and good hygiene, are critical to slowing the spread of this virus.

Left: Caution tape is seen wrapped around a playscape at the Still Street Playground in Brookline, MA, which was closed as part of an effort by the town of Brookline to reduce the spread of coronavirus, on March 16, 2020. (Photo by Jessica Rinaldi/The Boston Globe via Getty Images)