NEW YORK — Faced with 20,000 coronavirus deaths and counting, the nation’s nursing homes are pushing back against a potential flood of lawsuits with a sweeping lobbying effort to get states to grant them emergency protection from claims of inadequate care.

At least 15 states have enacted laws or governors’ orders that explicitly or apparently provide nursing homes and long-term care facilities some protection from lawsuits arising from the crisis. And in the case of New York, which leads the nation in deaths in such facilities, a lobbying group wrote the first draft of a measure that apparently makes it the only state with specific protection from both civil lawsuits and criminal prosecution.

Now the industry is forging ahead with a campaign to get other states on board with a simple argument: This was an unprecedented crisis and nursing homes should not be liable for events beyond their control, such as shortages of protective equipment and testing, shifting directives from authorities, and sicknesses that have decimated staffs.

“As our care providers make these difficult decisions, they need to know they will not be prosecuted or persecuted,” read a letter sent this month from several major hospital and nursing home groups to their next big goal, California, where Gov. Gavin Newsom has yet to make a decision. Other states in their sights include Florida, Pennsylvania and Missouri. 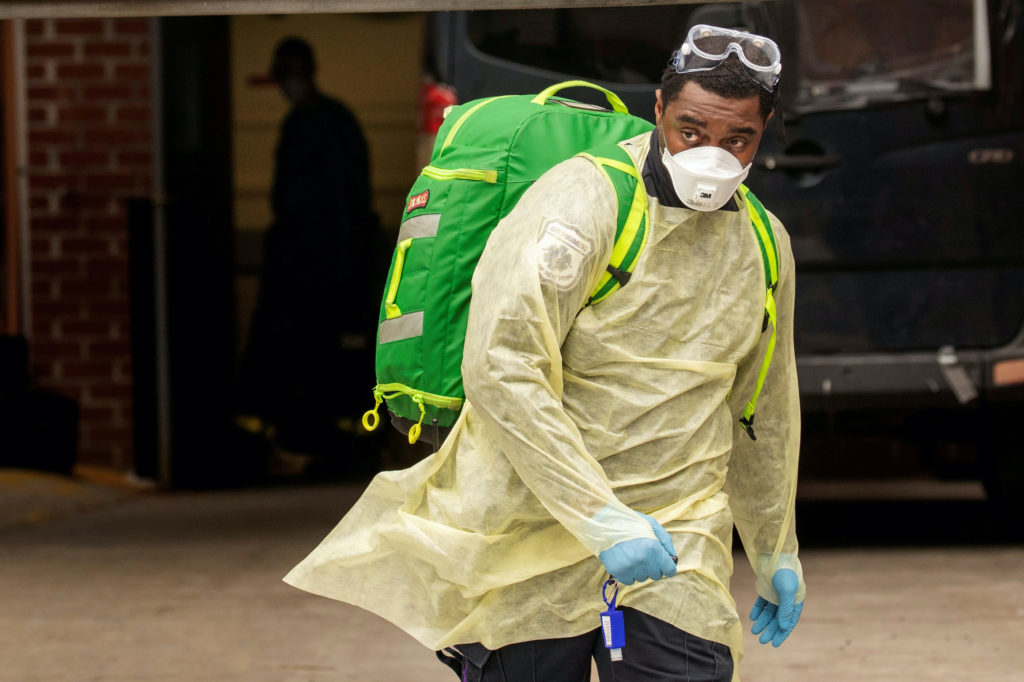 Watchdogs, patient advocates and lawyers argue that immunity orders are misguided. At a time when the crisis is laying bare such chronic industry problems as staffing shortages and poor infection control, they say legal liability is the last safety net to keep facilities accountable.

They also contend nursing homes are taking advantage of the crisis to protect their bottom lines. Almost 70% of the nation’s more than 15,000 nursing homes are run by for-profit companies, and hundreds have been bought and sold in recent years by private-equity firms.

“What you’re really looking at is an industry that always wanted immunity and now has the opportunity to ask for it under the cloak of saying, ‘Let’s protect our heroes,‘” said Mike Dark, an attorney for California Advocates for Nursing Home Reform.

“This has very little to do with the hard work being done by health care providers,” he said, “and everything to do with protecting the financial interests of these big operators.”

Nowhere have the industry’s efforts played out more starkly than in New York, which has a fifth of the nation’s known nursing home and long-term care deaths and has had at least seven facilities with outbreaks of 40 deaths or more, including one home in Manhattan that reported 98.

New York’s immunity law signed by Democratic Gov. Andrew Cuomo was drafted by the Greater New York Hospital Association, an influential lobbying group for both hospitals and nursing homes that donated more than $1 million to the state Democratic Party in 2018 and has pumped more than $7 million into lobbying over the past three years. 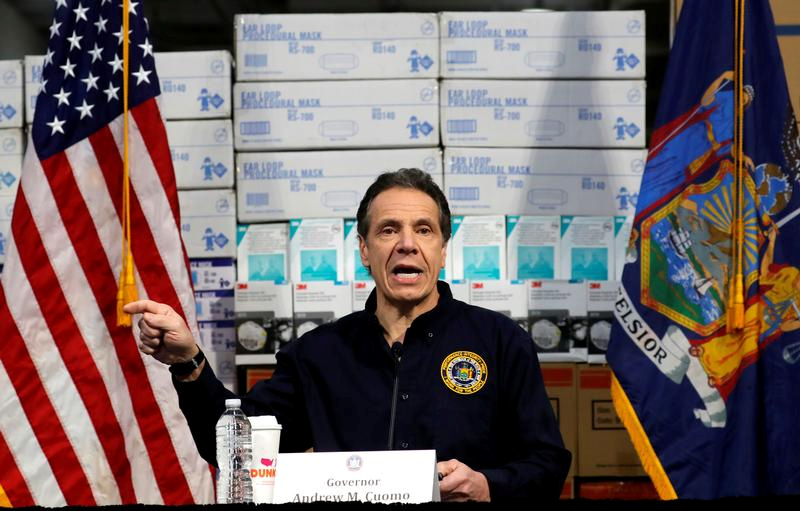 New York Governor Andrew Cuomo speaks in front of stacks of medical protective supplies during a news conference at the Jacob K. Javits Convention Center which will be partially converted into a temporary hospital during the outbreak of the coronavirus disease (COVID-19) in New York City, New York, U.S., March 24, 2020. Photo by Mike Segar/Reuters.

While the law covering both hospital and nursing care workers doesn’t cover intentional misconduct, gross negligence and other such acts, it makes clear those exceptions don’t include “decisions resulting from a resource or staffing shortage.”

Cuomo’s administration said the measure was a necessary part of getting the state’s entire health care apparatus to work together to respond to the crisis.

“It was a decision made on the merits to help ensure we had every available resource to save lives,” said Rich Azzopardi, a senior advisor to Cuomo. “Suggesting any other motivation is simply grotesque.”

Nationally, the lobbying effort is being led by the American Health Care Association, which represents nearly all of the nation’s nursing homes and has spent $23 million on lobbying efforts in the past six years.

Their provisions vary but largely apply to injuries, deaths and care decisions, sometimes even to property damage. But there are limitations: Most make exceptions for gross negligence and willful misconduct, and they generally apply only during the emergency.

Toby Edelman of the Center for Medicare Advocacy is troubled that homes are getting legal protections while family members aren’t being allowed to visit and routine government inspections have been scaled back.

“Nobody is looking at what’s happening,” she said, adding that immunity declarations could make even gross or willful negligence suits harder since homes could argue any deficiencies were somehow tied to the pandemic.

“Everything can’t be blamed on COVID-19. Other things can happen that are terrible,” she said. “Just to say we’re in this pandemic so anything goes, that seems too far.” 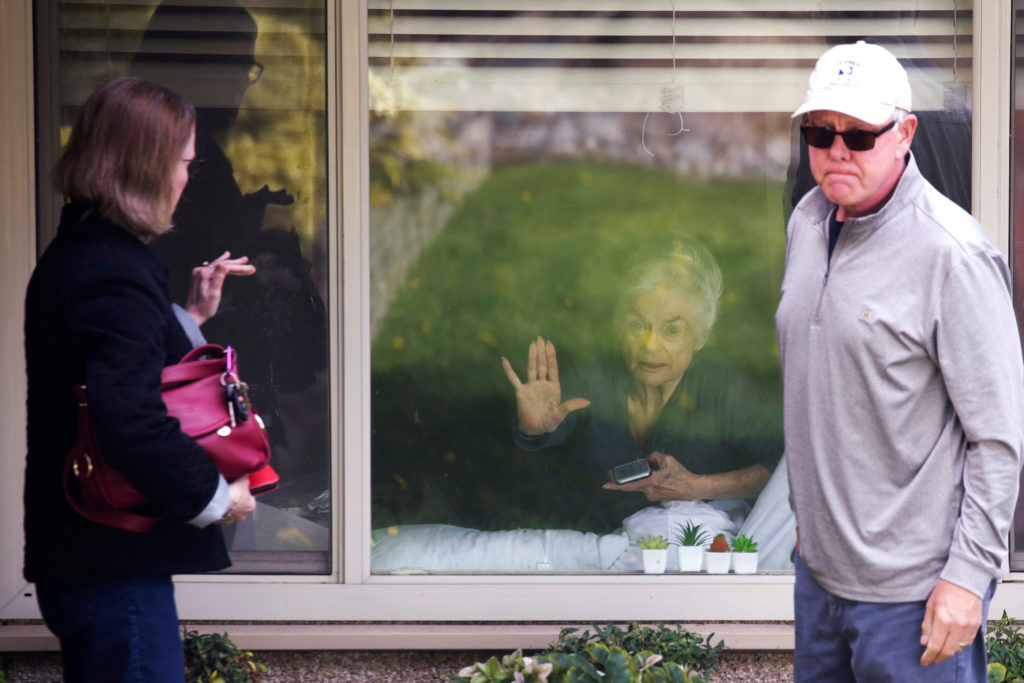 FILE PHOTO: Judie Shape, 81, who tested positive for coronavirus, waves goodbye as her daughter Lori Spencer and husband Michael Spencer visit outside her room at Care Center of Kirkland, the Seattle-area nursing home which is one of the epicenters of the coronavirus (COVID-19) outbreak, in Kirkland, Washington, U.S. March 17, 2020. REUTERS/Jason Redmond.

Among the situations for which lawyers say nursing homes should be held to account: Homes that flouted federal guidelines to screen workers, cut off visitations and end group activities; those that failed to inform residents and relatives of an outbreak; those that disregarded test results; and homes like one in California, where at least a dozen employees did not show up for work for two straight days, prompting residents to be evacuated.

“Just because you have a pandemic doesn’t mean you give a pass on people exercising common sense,” said Dr. Roderick Edmond, an Atlanta lawyer representing families suing over COVID-19 deaths in an assisted-living facility.

“If you take the power of suing away from the families, then anything goes,” said Stella Kazantzas whose husband died in a Massachusetts nursing home with the same owners as the home hit by the nation’s first such outbreak near Seattle, which killed 43 people.

“They already knew in Washington how quickly this would spread,” she said. “They should have taken extreme measures, sensible measures. And they were not taken.”

While the federal government has yet to release numbers on how the coronavirus has ravaged the industry, The Associated Press has been keeping its own tally based on state health departments and media reports, finding 19,265 deaths in nursing homes and long-term care facilities nationwide.

All the new immunity laws notwithstanding, there is a potential wave of lawsuits coming. Illinois lawyer Steven Levin said he’s received dozens of calls from people considering suing homes over the outbreak. Florida lawyer Michael Brevda said his firm gets 10 to 20 calls a day. And a lawyer in Massachusetts said he’s gotten maybe 70 from families with relatives at homes struck by the virus.

“We’re getting inundated,” said David Hoey, whose practice near Boston has been suing homes for 25 years. “They’re grieving and they’re confused. … ‘My loved one just died from COVID. What can I do?’”

American Health Care Association CEO Mark Parkinson said the notion of lawyers gearing up for lawsuits in the “middle of a battle to save the elderly” is “pathetic” and doesn’t consider the hardships nursing home workers have endured.

“The second-guessing of people after a tragedy, if those people did the best that they could under the circumstances, is just wrong,” said Jim Cobb, the New Orleans attorney who successfully defended nursing home owners charged in the deaths of 35 residents who drowned in Hurricane Katrina.

“There’s a lot to be said for someone acting in good faith in the face of a natural disaster and state of emergency, and they should have criminal immunity.”