Back in session: Senate risks a return but House stays away

WASHINGTON — Weighing the risks, the Senate will reopen on Monday as the coronavirus crisis rages and the House stays shuttered, an approach that leaves Congress as divided as the nation.

Senate Majority Leader Mitch McConnell’s decision to convene 100 senators at the Capitol during a pandemic gives President Donald Trump the imagery he wants of America getting back to work, despite health worries and a lack of testing.

Yet, the Washington region remains under stay-at-home orders as a virus hot spot. Gathering senators for the first time since March risks lawmakers as well the cooks, cleaners, police officers and other workers who keep the lights on at the Capitol complex.

“We will continue to stand together for the American people — even as we stand 6 feet apart,” McConnell said ahead of the opening. 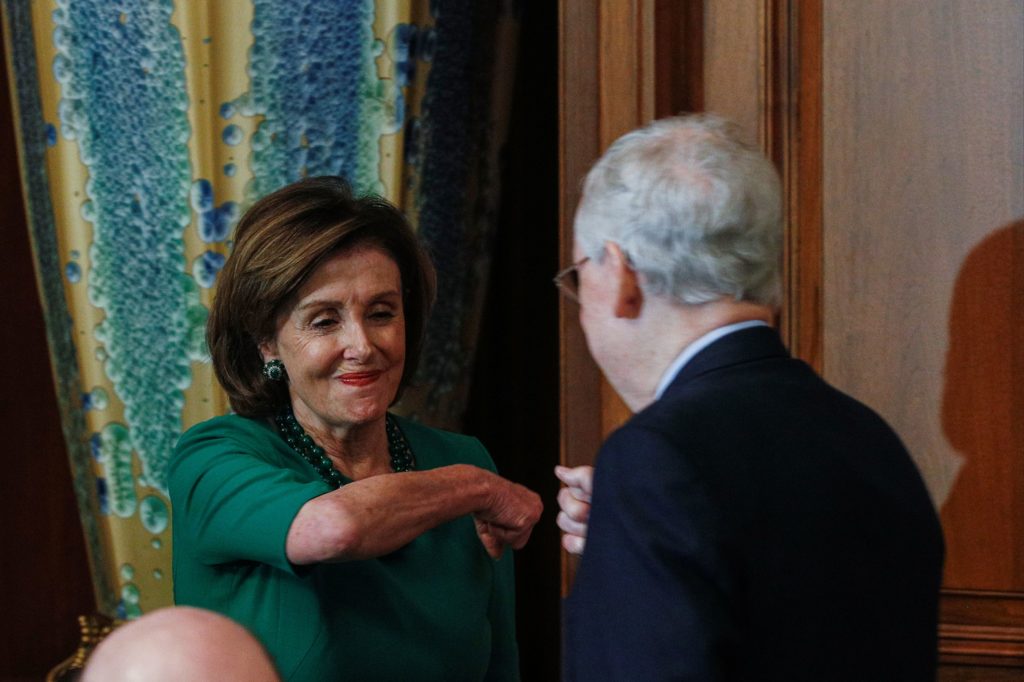 Trump himself offered Congress access to the instant virus test system used to screen visitors to the White House. But in an extraordinary rebuff, McConnell and House Speaker Nancy Pelosi said in a statement Saturday that they would “respectfully decline” the offer and instead direct resources to the front lines “where they can do the most good.”

For Senate Republicans, returning to session is an attempt to set the terms of debate as Democrats push for another pricey coronavirus relief bill. Frustrated after Pelosi boosted Democratic priorities in earlier aid packages, an unprecedented $3 trillion in emergency spending, they are resisting more. Republicans are counting on the country’s reopening and an economic rebound as their best hope to limit a new round of big spending on virus aid.

As the Senate gavels in and the 430-member House stays away on the Capitol physician’s advice, the Congress provides a snapshot of divided America struggling to confront the COVID-19 crisis. Some states are reopening, others are staying closed and questions abound.

Senators face few new rules for operating in the pandemic beyond the recommendations that they wear masks — blue face coverings will be available for free — keep their distance and leave most staff at home. Hand sanitizer is back in stock. But public access will be limited, including at public hearings. The Capitol itself remains closed to visitors and tours.

Democrats complain they are returning to a noticeably light agenda, packed with confirmation hearings for Trump’s judicial and executive branch nominees, but with little emphasis on the pandemic and Great Depression-level economic collapse.

“Democrats are going to fight like hell,” Senate Democratic leader Chuck Schumer said on a conference call with Latino leaders. “We’re going to make sure people have enough money to live and get back on their feet.”

In making his snap decision to return, McConnell said the Senate cannot “sit on the sidelines.” He compared the senators to the essential work force of grocery clerks, truck drivers and others keeping Americans fed during the crisis.

But Capitol Hill erupted in the days after the attending physician, facing questions from top GOP officials, said the health office did not have the means to perform instant virus tests on returning lawmakers.

On Saturday, Trump stepped in.

“There is tremendous CoronaVirus testing capacity in Washington for the Senators returning to Capital Hill on Monday,” Trump tweeted. 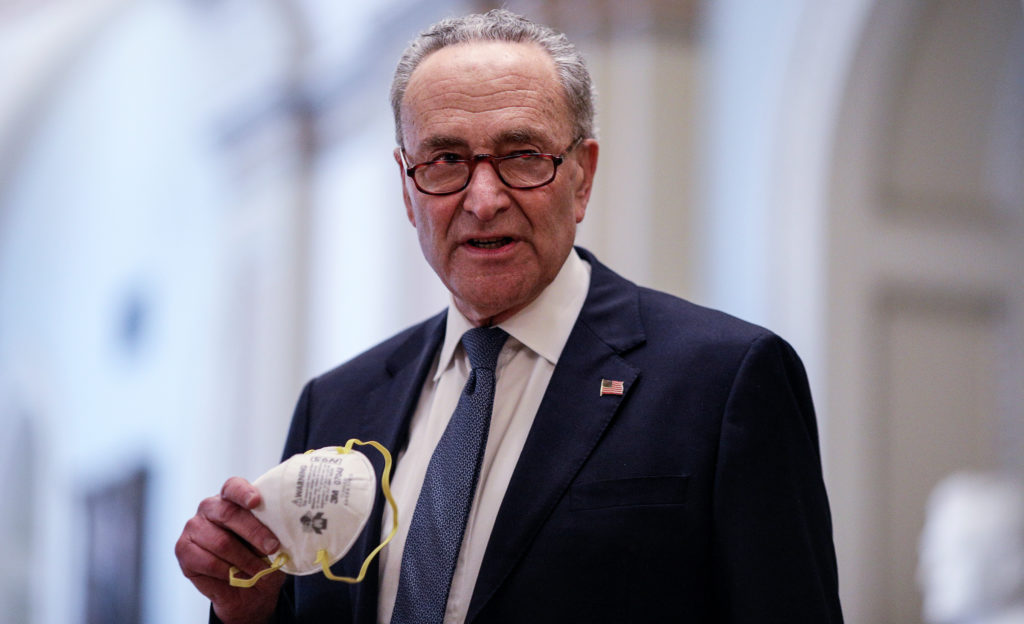 U.S. Senate Minority Leader Chuck Schumer (D-NY) carries his face mask as he arrives inside the U.S. Capitol after it was announced U.S. congressional leaders and the White House agreed on nearly $500 billion more in coronavirus relief for the U.S. economy, bringing to nearly $3 trillion the amount allocated to deal with the crisis, in Washington, U.S., April 21, 2020. REUTERS/Tom Brenner

In the rare joint statement, the congressional leaders said Congress will use the existing protocols from the Capitol physician “until these speedier technologies become more widely available.”

The haphazard approach — to testing, health guidelines and the broader reopening — is what Democrats say is inadequate in the Republican response to the crisis.

With more than 65,000 U.S. deaths due to the virus and 30 million Americans suddenly unemployed, Democratic senators say the focus needs to be singular — to ease this crisis and prevent a second wave of infections.

“If we’re going to go back, let’s do something about COVID,” Schumer said.

Instead, the agenda is focused on the president’s nominees. Among them is Justin Walker, a conservative, McConnell-backed pick to be a federal judge on the U.S. Courts of Appeal in the District of Columbia Circuit, which is seen as a stepping stone to the Supreme Court.

A nomination hearing also is scheduled for John Ratcliffe, the Texas Republican congressman who is Trump’s choice to lead the Office of the Director of National Intelligence.

Several committees will meet to debate issues related to the virus outbreak, including the nominee for a new oversight commission. The Health Committee will hold a session on potential cures and the Commerce Committee a hearing on the airline industry.

Yet as much as the world has changed during the global pandemic, the Senate remains a place of traditions. 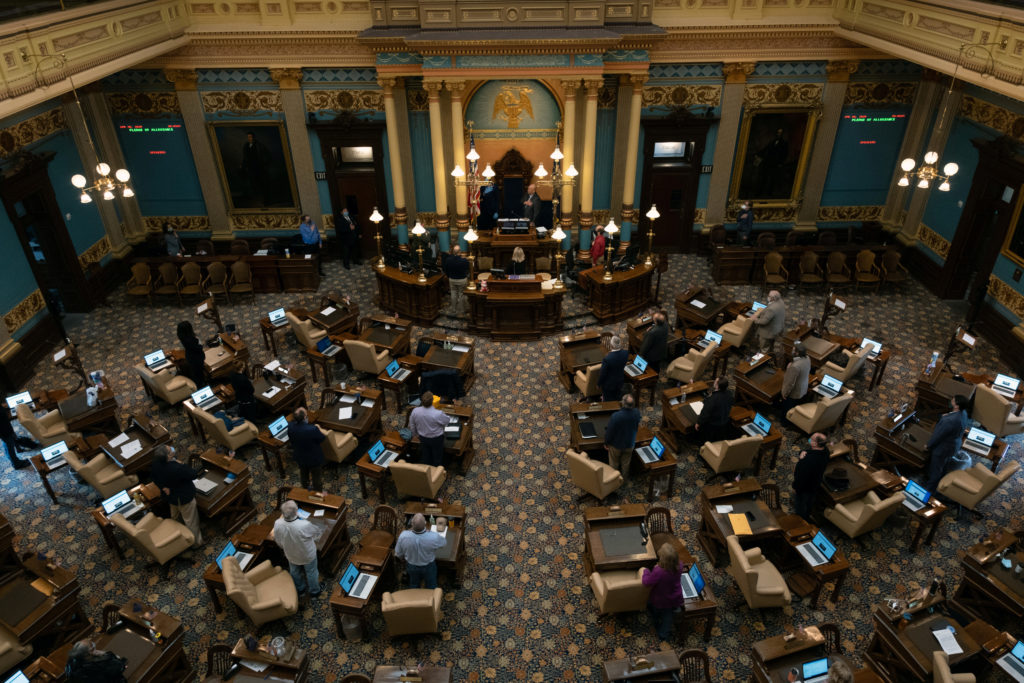 Senators stand for the pledge of allegiance before the vote on the extension of Governor Gretchen Whitmer’s emergency declaration/stay-at-home order due to the coronavirus disease (COVID-19) outbreak, in Lansing, Michigan, U.S. April 30, 2020. REUTERS/Seth Herald

Republican senators still plan to sit down for their regular luncheons, though the physician’s social distancing guidance limits them to three to a table. It was after one of their lunches in March that several senators went into self-quarantine because of their exposure to fellow GOP Sen. Rand Paul of Kentucky, who tested positive.

Democrats, who will meet for lunch over conference call, are assessing whether to appear in person for the committee hearings or dial in remotely.

Politically, operating the Senate even in a diminished capacity aligns with Trump’s effort to return to a sense of normalcy.

It also draws a stark contrast with Pelosi’s House, its return date uncertain. Trump has mocked House Democrats as enjoying a “vacation.”

Republicans worry that support for Trump is drifting as he responds to the coronavirus, a drag on the GOP that threatens McConnell’s majority. Confronting his own reelection in fall, McConnell is eager to show the Senate is working.

Drawing GOP senators back to Washington, McConnell can more directly involve them in the new round of deliberations.

“I look forward to seeing my colleagues on Monday,” he said in a statement.