How a dream cruise ended with a novel coronavirus quarantine

Dr. Sommer Gunia’s suitcases sat packed, ready to disembark, in her cruise ship cabin. It was Feb. 3, and Gunia and her husband, Steven, had just spent two weeks on board the Diamond Princess, a luxury liner that sailed from Hong Kong to Yokohama, Japan. The next day, they would be flying back home to Scottsdale, Arizona, where she works as a surgeon. On their final night, they savored this bucket-list trip they had saved up for two years to take.

But at 2 p.m., the cruise ship staff had shut down the casino, giving no reason, Gunia said. Bummer — she and her husband had wanted to play bingo, but they chalked it up to there being “something wrong with the boat.”

“We had no idea” what was going on, Gunia said.

By 10:30 p.m., the Japanese Ministry of Health was on board. Going cabin by cabin, officials assessed more than 2,600 passengers, taking people’s temperatures, asking about symptoms — a process that would take nearly 24 hours, Gunia said. She rescheduled her plane ticket home, now not knowing when she could leave.

She eventually learned that a cruise ship passenger who had reported feeling ill was diagnosed with novel coronavirus, an illness that had swept China, its country of origin, and was popping up around the world. Gunia had heard bits and pieces about this new virus, akin to the common cold, SARS and MERS. Like most carefree vacationers, she paid it little mind, except to wear a facemask during excursions off the boat.

A week later, Gunia’s dream trip is over — but she’s still on the ship. 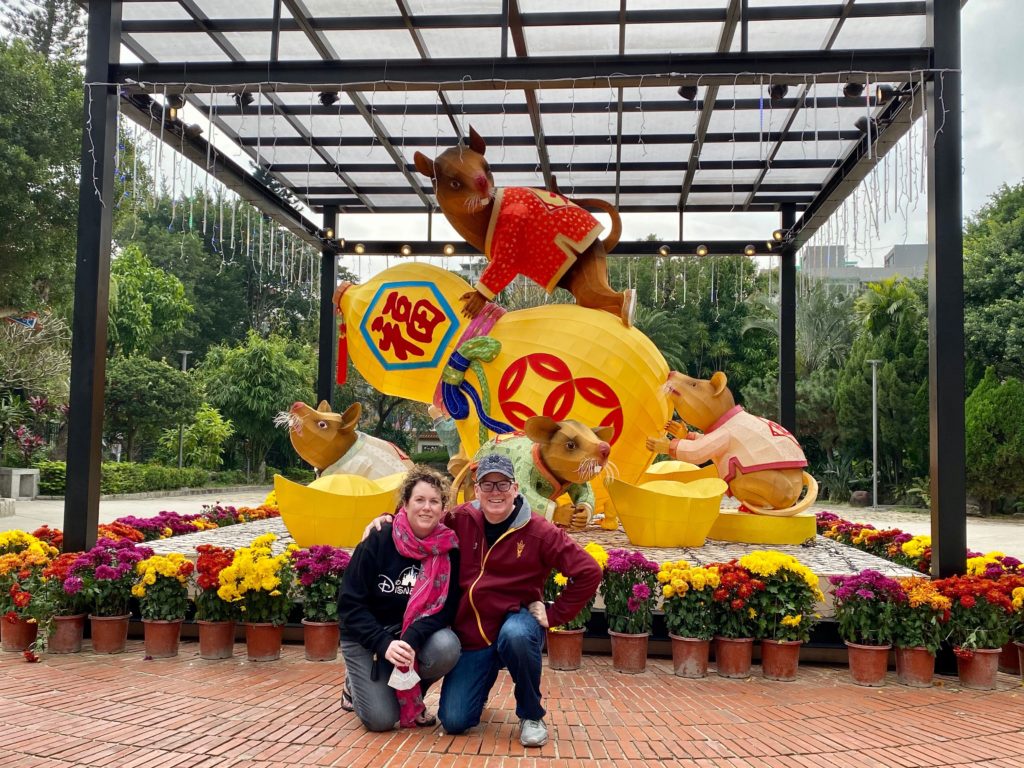 Sommer Gunia and her husband, Steven, are being held in quarantine along with more than 2,600 cruise ship passengers on board the Diamond Princess off the coast of Japan in an effort to prevent further spread of novel coronavirus. Photo courtesy Sommer Gunia.

The Diamond Princess is quarantined until Feb. 19, while floating in Yokohama Bay. On Tuesday, Japanese health officials reported that the number of confirmed cases of novel coronavirus on the boat had risen to 214, and one person has died. Gunia said she and her husband “are in total seclusion” on the boat, and remain symptom-free.

“We’re all in our rooms breathing our own air,” Gunia said. “So it’s not like we’re getting exposed to other people.”

Gunia said she has pondered many questions since the quarantine began and more Diamond Princess passengers have grown sick. Were the people with confirmed cases staying in rooms near each other? Did they eat at the same tables? Or go together on excursions off the cruise ship? All she can do is wonder. 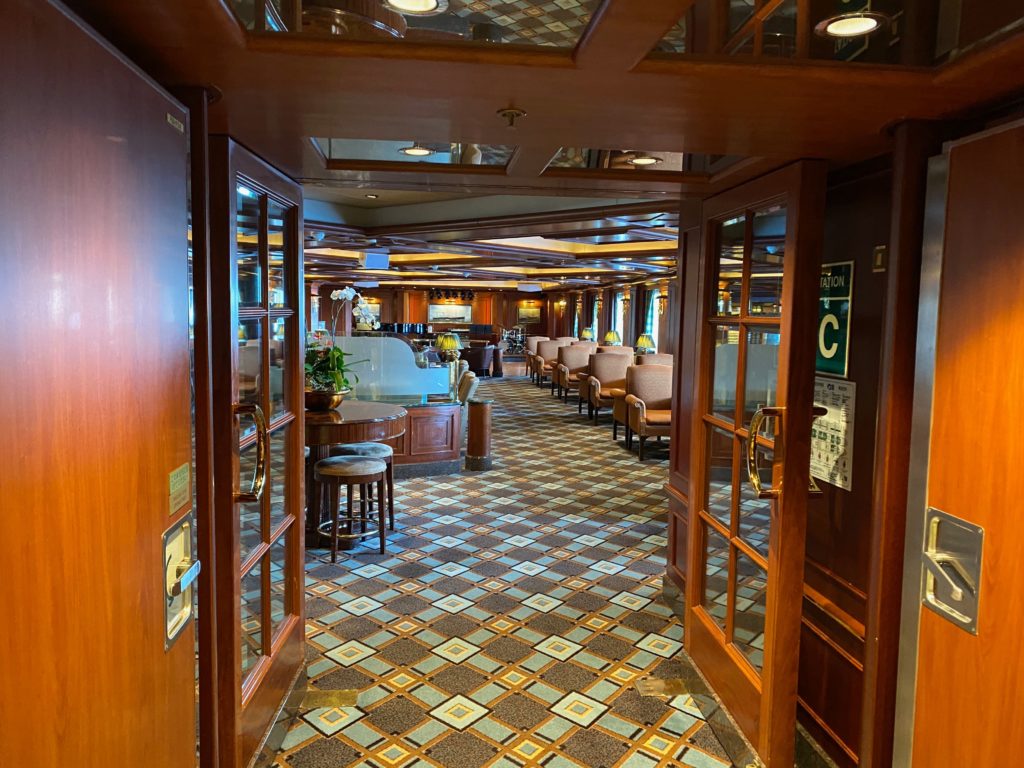 A bar stands empty on board the Diamond Princess, a luxury cruise ship held in quarantine off the coast of Japan until Feb. 19 to prevent further spread of novel coronavirus. Dozens of passengers have been diagnosed with the new illness. Photo courtesy Sommer Gunia.

Each day follows a familiar rhythm. By 8 a.m., a gentle knock at their cabin door wakes Gunia and her husband. Food shows up — usually pastries, yogurt and fruit. Gunia has squirreled away aluminum foil and leftovers, just in case the food deliveries stop or take too long to appear.

The couple watch live news coverage, movies and streaming television shows. They play sudoku puzzles that are dropped off at their cabin. The cruise ship staff uploaded videos of tai chi exercises that passengers could follow in their rooms to burn restless energy. Gunia says she and her husband run in place at times and are lucky to have a suite with a deck that views the ocean. Her mother and stepfather are stuck in a 150-square-foot interior room without windows. On Thursday, Japanese health officials began to allow cruise ship passengers age 80 or older who tested negative for the virus and were staying in interior cabins to spend the rest of their quarantine period off the boat, at an on-shore facility.

Because she and her husband are “young, healthy and have a balcony,” Gunia said they “would be the last ones” to get off the boat.

They take their temperature multiple times a day with thermometers provided by the Japanese health ministry. If one of them develops a fever above 99.5 degrees Fahrenheit, they are supposed to call a number so they can receive further medical evaluation. 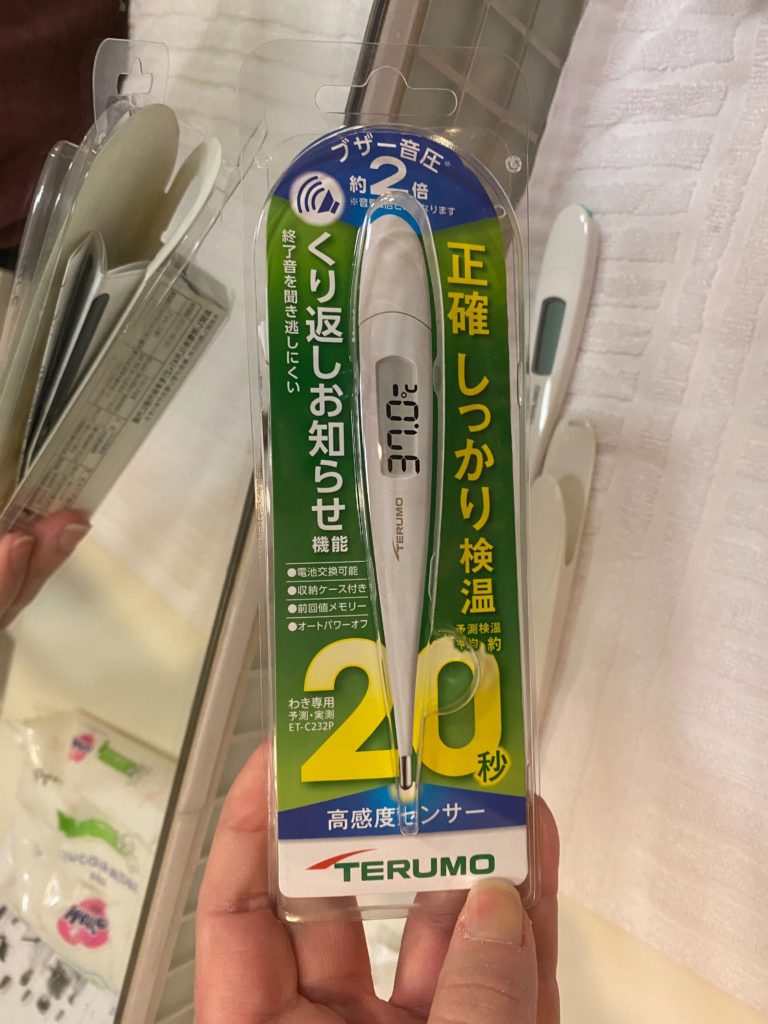 The Japanese Ministry of Health distributed thermometers to passengers on board the Diamond Princess so they can monitor their temperatures and report if fever develops. The ship is under quarantine orders until Feb. 19 to prevent further spread of novel coronavirus. Photo courtesy Sommer Gunia

Behind China, the Diamond Princess now holds the largest number of confirmed cases of the virus per population, said Ron Klain, who served as the Obama administration’s Ebola czar. This episode illustrates why quarantine as a public health precaution “is a double-edged sword,” he said during a panel discussion about the virus at the Aspen Institute in Washington, DC on Tuesday.

As of Tuesday, more than 1,000 people have died from novel coronavirus, and nearly 43,000 people have gotten sick, mostly within China, according to the World Health Organization. The WHO also gave the virus a new, specific name, Covid-19, to avoid the generic term “coronavirus” or any linkage of the illness to “geographical location, an animal, an individual or group of people,” according to WHO Director-General Tedros Adhanom Ghebreyesus.

Thirteen people have been diagnosed with the new virus in the United States, including in Washington state, Illinois, California, Arizona, Massachusetts and Wisconsin. 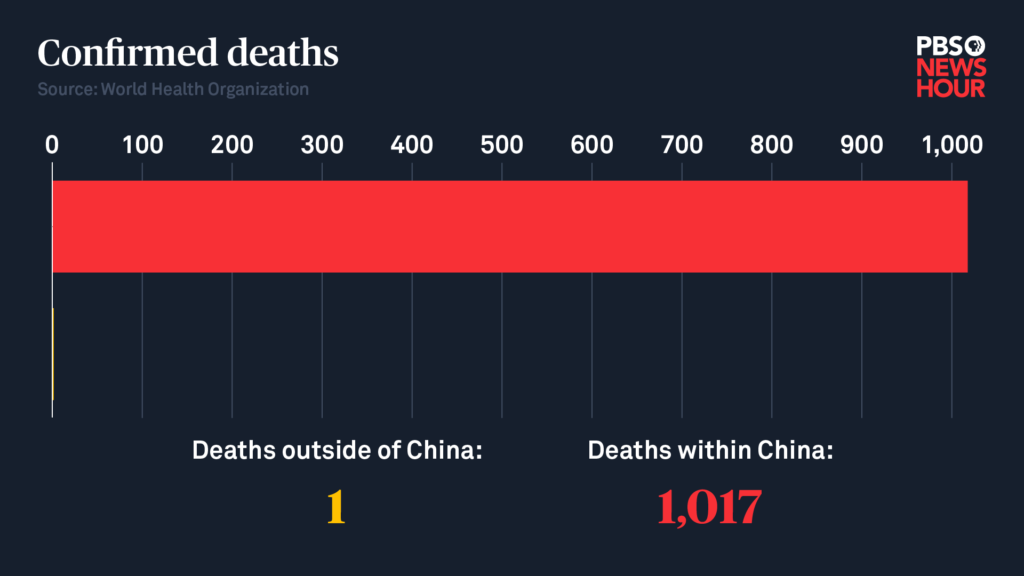 Federal quarantine orders expired on Feb.11 for the first planeload of 195 Americans airlifted from Wuhan, China– the epicenter for the virus. After they arrived in Southern California on Jan. 30, they were held at March Air Force Base. Since then, four more planes have brought U.S. citizens back from Wuhan, China, placing each of them under quarantine. Those Americans underwent tests early Tuesday, and after results showed no sign of viral infection, they were free to go home.

WATCH: Can China’s information about the novel coronavirus be trusted?

The measures taken by the U.S. are a response to how little public health officials know about the virus, its transmission and incubation, according to top U.S. health officials in recent weeks, including Nancy Messonnier, who directs the National Center for Immunization and Respiratory Diseases and answered questions from reporters Tuesday.

While no one thinks these travel bans and quarantine orders will “hermetically seal” the U.S. and totally protect the country from the virus’ spread, Messonnier said, “if we pause it a little bit, we buy ourselves some time.” 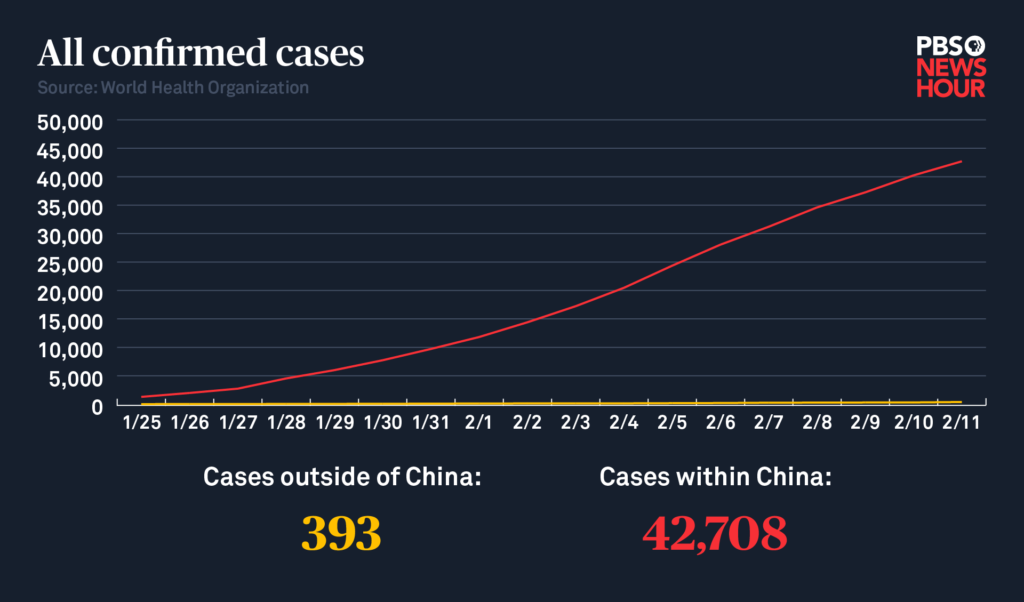 That time could mean the difference between containing the virus, versus allowing the virus to flood hospitals and clinics, overwhelming the nation’s health care system, she said.

But quarantining a ship like the Diamond Princess is a public health strategy that harkens back to the Middle Ages, said Lawrence Gostin, a global health law professor at Georgetown University who also directs the World Health Organization Collaborating Center on National and Global Health Law. Gostin said one reason why countries are resorting to these practices is because they do not know enough about the illness, a knowledge gap he blames on Chinese authorities for their lack of transparency and failure to offer more information about the virus beyond its genomic sequencing. The U.S. has used that information alone to develop diagnostic tests to determine if a person had the virus or not.

In the absence of more information about what the virus has done inside China, Gostin said countries are in desperate need for “much better procedures” to identify, isolate, and trace contacts for people who are sick with this new virus, especially on cruise ships, which he said “can be a hotbed for infections.” 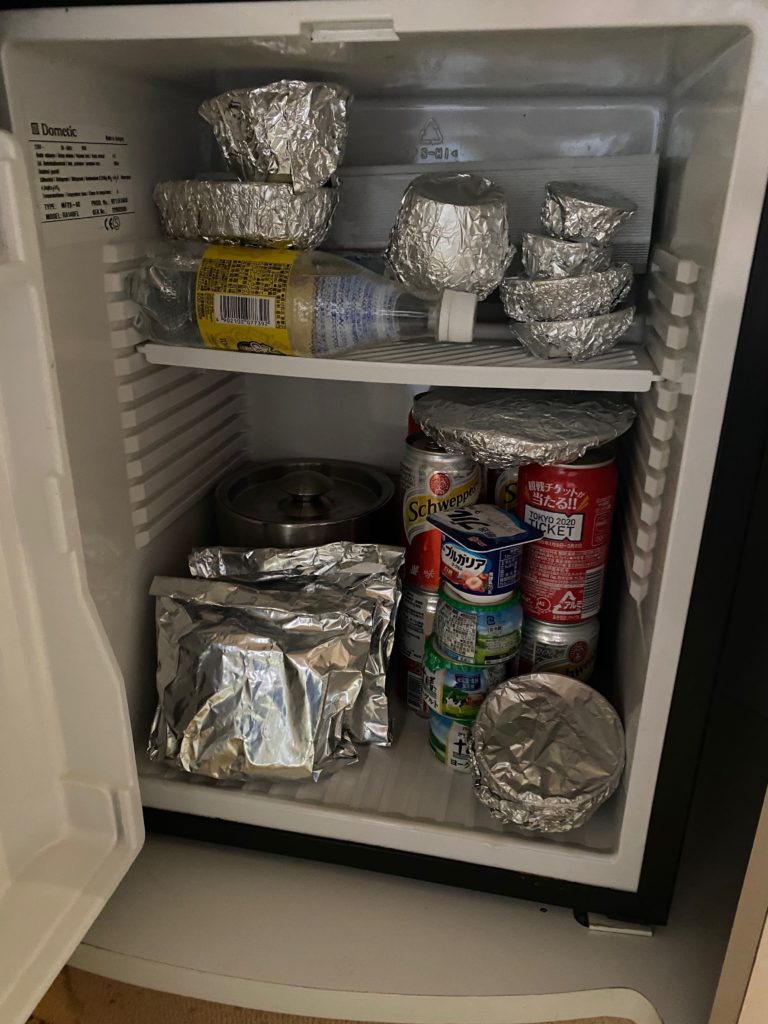 “It’s chaos. There’s no rule of law. No norm,” Gostin said. “Nobody knows whether individual ports will allow them to dock, or what the public health protocol should be.”

Gunia said she cannot think about all that right now. There is no point in thinking about what she cannot control, she said.

When the situation gets to her, she plays games to distract herself. She works to keep her spirits up and credits the cruise ship crew with making the best of a terrible situation. But, she said, “even prisoners get time outside everyday.”

Gunia has had to rescheduled surgeries and meetings with her patients, hoping there will not be any delays getting home to Arizona after the quarantine orders for the ship expire. But the unexpected two-week delay getting home has summoned new concerns. Gunia’s husband takes blood pressure medication he must take daily, and they only packed a few extra doses. Who plans for a viral outbreak to stall your cruise ship for 14 days? It is unclear when the health ministry or ship staff will replenish his supply.

“Everything takes a long time around here,” she said.

Left: The cruise ship Diamond Princess, where dozens of passengers were tested positive for coronavirus, is seen through steel fence at Daikoku Pier Cruise Terminal in Yokohama, south of Tokyo, Japan, February 11, 2020. Photo by Issei Kato/Reuters.