From the Benton Harbor side, one bridge leads to the hospital that serves all the people in these two communities, where in the past, Black residents have complained of disparate treatment.

The other bridge leads to the jail.

“The lives of these two small towns on Lake Michigan are more interrelated than it might seem, and I love them both,” said Anna Clark, Detroit-based journalist for ProPublica and author of “The Poisoned City: Flint’s Water and the American Urban Tragedy.” She grew up in St. Joseph, and her family, church, and work are all in Benton Harbor. “Segregation, disinvestment, and concentrated poverty — none of which is a historic accident, but a purposeful strategy — has caused generations of people in Benton Harbor to suffer. The inability to reckon with this and make systemic change continues to cause harm.”

WATCH: Benton Harbor’s water has had excess lead for years. Residents are only now receiving help

Nestled against the shore of Lake Michigan on the southwestern side of the state, Benton Harbor is a small town with a population of just under 10,000. According to the U.S. Census Bureau figures for 2019, 84.7 percent of people in Benton Harbor are Black, and 12.2 percent are white. On the other side of the bridges, St. Joseph is another small town of about the same size, but with a population that is 83.7 percent white and 4.9 percent Black.

In 2018, Michigan adopted changes to the lead and copper rule in the Michigan Safe Drinking Water Act. The governor’s office says these changes give Michigan the most stringent standard for drinking water in the nation. However, starting in 2018, Benton Harbor’s drinking water failed to meet standards for six consecutive sampling periods over the last three years, and some critics say the lead levels are even higher than those in Flint, Michigan, during that city’s well-publicized water crisis in 2014.

No level of lead is considered safe, and can cause developmental delays in children, but in the latest sampling period, 90 percent of Benton Harbor’s water samples fell below 24 parts per billion (ppb), with 11 sites exceeding the 15 ppb threshold for action. One house had lead levels of 889 ppb. The Benton Harbor Utility Services Department attributes the high lead levels to lead service lines, corrosion in household plumbing, and erosion of natural deposits. 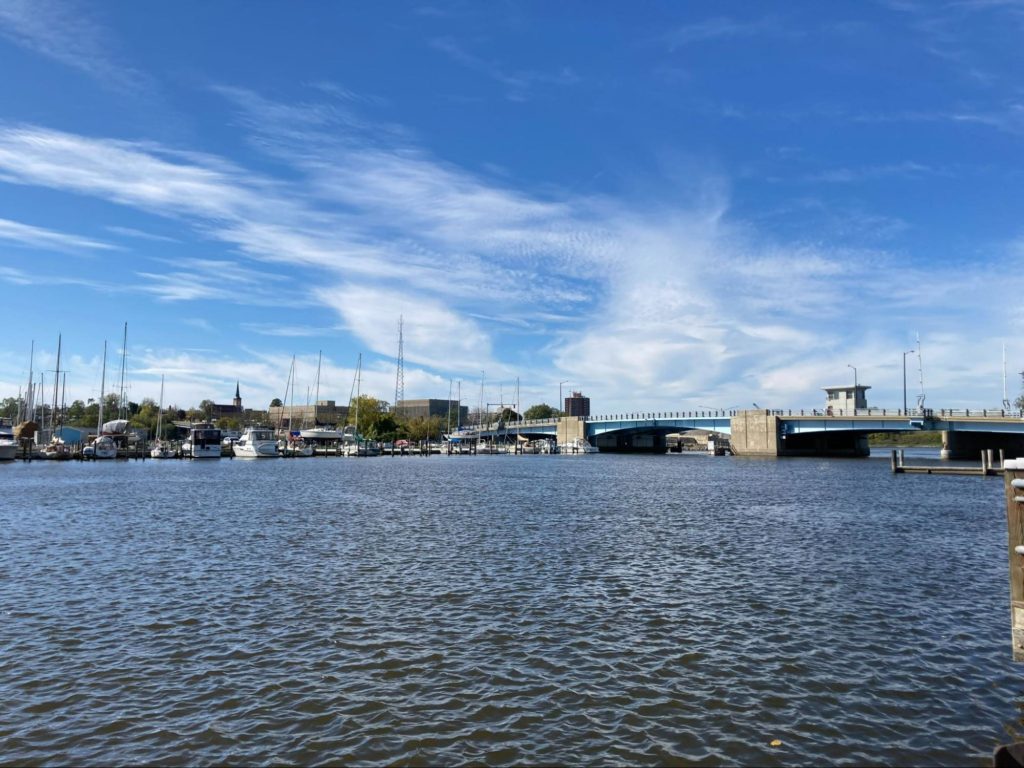 Michigan Lieutenant Governor Garlin Gilchrist II on October 14 traveled to Benton Harbor to announce an executive directive signed by Michigan Governor Gretchen Whitmer laying out a “whole of government” response to quickly and aggressively take action there to correct the levels of lead in its drinking water.

“While there are already a range of efforts underway,” Gilchrist said, “this directive ensures that state government is taking a truly all hands on deck approach, that we are all rowing in the same direction, and that we are all laser focused on the same end goals.”

The biggest challenge will be replacing all lead service lines, which the state pledges to do within 18 months. Gilchrist said that is an especially aggressive pace. For comparison, he said that cities usually replace 7 percent of pipes a year, which means that it usually takes 14 years to replace them all.

Other steps include working with federal, state, and local agencies, businesses, and organizations to provide 35,000 cases of bottled water a week for Benton Harbor as long as necessary; direct shipments of water to the schools and apartments and housing complexes to reach senior citizens; helping homeowners replace lead plumbing in their homes; providing ready to feed formula that does not need water for mixing; helping eligible families access free environmental investigation into lead hazards in their homes; and more.

But coming on the heels of the 2014 Flint water crisis, in which another majority Black city halfway across the state struggled with lead leaching into its drinking water and poisoning its residents after an emergency manager switched the city’s water supply from the Detroit water system to the Flint River, there are many questions about the role of race and whether the water contamination in Benton Harbor is a symptom of a larger issue of segregation and inequity and how it is playing out in these Michigan cities.

WATCH: 6 years after water crisis began, what has changed in Flint — and what hasn’t

“At one point, Benton Harbor was a predominantly white community, until the ‘50s and ‘60s when Blacks started moving from down south up to Benton Harbor,” said Trenton Bowens, a special assistant to Benton Harbor mayor Marcus Muhammad. “We had a lot of manufacturing jobs that contributed to the tax base here and gave people a livable wage.”

Benton Harbor once was home to manufacturing plants for Whirlpool, Superior Steel Castings Co., and Auto Specialties Manufacturing Co., he said. Then came white flight. In 1960, Benton Harbor had 19,136 people, 25.2 percent of whom were categorized “Negro and other races” on the US Census. In 2019, its population of 9,741 is 84.7 percent Black. Some plants closed, moving jobs to other countries and other states. Then people started moving to places with better jobs and better resources.

In contrast, white-collar jobs, companies, and the region’s hospital were located in neighboring St. Joseph, giving the city several different resources for a larger tax base that contributes to its local economy and schools. Benton Harbor’s sole public high school nearly closed in 2019 due to budget deficits.

Bowens notes that lead was found in St. Joseph’s drinking water too. But unlike Benton Harbor, the houses in that city are not as old and its city government has the resources to take care of it. According to St. Joseph’s annual water quality reports, St. Joseph’s water shows no discernible lead levels when it leaves the water treatment plant, but it picks up lead from the corrosion in household plumbing systems. Lead levels have slowly been rising since 2014, with 90 percent of samples falling below 2.0 ppb in 2014, 6.8 ppb in 2017, and 9.0 ppb in 2020. Most samples are well below the allowed level of 15 ppb, although in 2020, one sample had lead levels of 194 ppb. 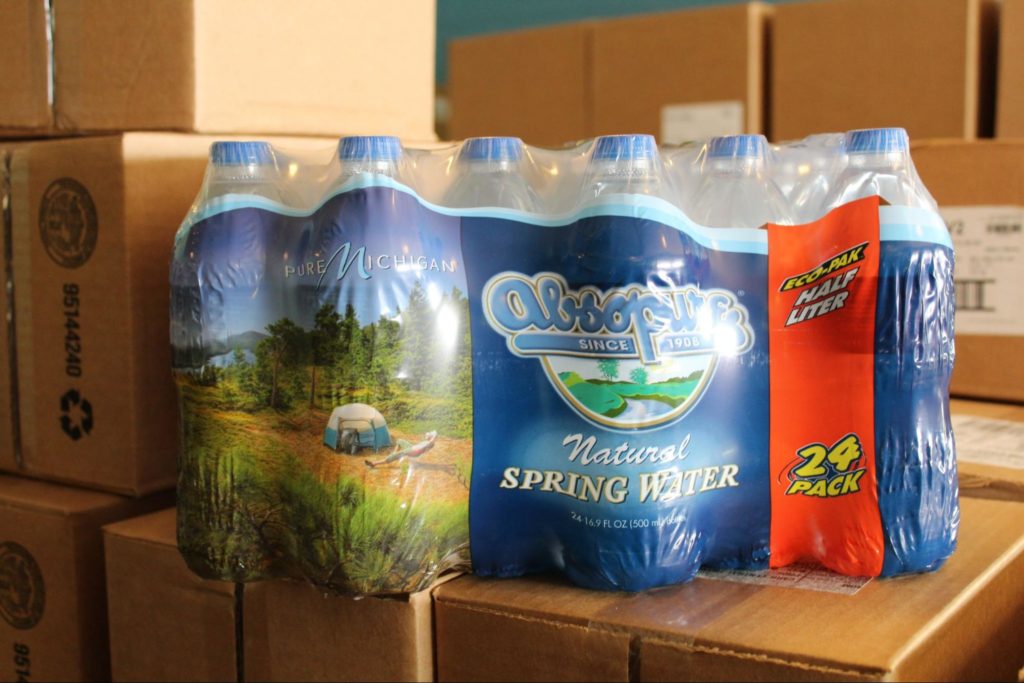 Bottled water and water filters ready for distribution at Lighthouse Ministries of Benton Harbor, after high levels of lead are found in the drinking water of Benton Harbor, Michigan. Oct. 18, 2021. Photograph by Frances Kai-Hwa Wang.

Many question the slow response time that the state had to another majority Black community dealing with contaminated drinking water. In September, a group of 20 organizations and individuals petitioned the Environmental Protection Agency to take emergency action and protect the residents of Benton Harbor from the lead contamination of their drinking water.

“When it comes to our water systems, we’re all in it together; everybody needs and deserves safe drinking water,” Clark said. “But our nation has a history of purposefully disinvesting in communities of color, making land and property worth less precisely because of the race of the people who live there. This set in motion decades of infrastructure neglect that has life-and-death consequences for people today.”

“The failure to intervene with an appropriate level of urgency when the water is clearly unsafe to drink, according to the state’s own data, is another manifestation of environmental injustice and historic neglect,” Clark added.

Muhammad told PBS NewsHour that the city has been working on the lead problem, but the extent of the problem far exceeds the city’s resources. He estimates that it will cost $30 million to replace all the city’s lead service lines, and on Oct. 18 the City Commission declared a state of emergency in Benton Harbor. The city received a $5.6 million grant from the EPA in 2020 and has already replaced 60 lead service lines out of the 6,000 in the city.

He said the city also began corrosion treatment of the water in 2018. That same year, the city’s school district tested the water in the schools and replaced fixtures that were leaching lead into the water.

The mayor also noted that the problem is an inherited one. The city was under emergency financial management from 2010 to 2017 under Republican governor Rick Snyder, during which the city commission had no power other than to call the meeting to order and to close the meeting.

“We were under lock and key,” Muhammad said. “Local control was returned, then one year later, I get a $30 million bill.”

The politicization of the COVID-19 pandemic also complicated the response, he says. “COVID really put a fly in the buttermilk, if you will, because everything was shut down.”

Muhammad theorizes that distractions at the state level – including anti-mask protesters with guns at the state’s capitol building in 2020, subsequent threats to kidnap the current governor, Gretchen Whitmer, and protests of the presidential election results – keep attention away from Benton Harbor. “It takes a bipartisan effort to get money to Benton Harbor. The governor cannot act unilaterally. That part is being left out,” he said. “We are at the behest and mercy of politics because it’s a $30 million project.”

The State of Michigan has allocated $10 million to Benton Harbor through a bipartisan agreement. Another $10 million is expected through the American Rescue Plan Act (ARPA).

“We have been working on this issue and problem with the resources and the money that we have, but now with the all out effort from the state, this allows us to really intensify to solve the problem,” Muhammad said.

Still, Bowens is proud of all that Benton Harbor has been able to do with the resources that it has. “But you can only squeeze so much juice out of a turnip,” he said. “If the state really wanted to help, they would do several things — education, housing, infrastructure.”

“Do you think Grosse Pointe Woods or Bloomfield Hills, Royal Oak, or that rich community in Oakland — Rochester Hills,” said Bowens, naming several affluent suburbs in the Metro Detroit area, “would they deal with lead in their pipes for three years? The answer is no.”

Benton Harbor’s water has had excess lead for years. Residents are only now receiving help