Why summer is the hungriest season for some U.S. kids

WASHINGTON — Now that Isaac Mejia has graduated first grade, he knows a little something about the grading scale. And he’s developed his own set of evaluations for the summer camp he attends here in D.C.

“Sometimes I just spit it out in the trash can,” he said. “But sometimes I’ll swallow it.”

That’s better than never, his camp counselors at Park View Recreation Center say. Even Isaac’s small bites of healthy food are more than many of his neighbors eat in the summertime. Because when school ends each year, so do the free and reduced-price meals that most low-income D.C. families rely upon for basic nutrition.

“Summer is a time of great risk for many children in terms of hunger,” said Kevin Concannon, under secretary for food, nutrition and consumer services at the United States Department of Agriculture. “I hear from school teachers and principals that when school starts up again in late August or September, they can almost always tell which kids have had a summer of reliable, healthy eating versus a summer of uncertainty.”

This year, the problem is expected to be particularly severe after recent reductions in the Food Stamp program in late 2013 left many families skipping meals or buying low-cost junk food at the grocery store to make up the difference. And while official numbers won’t be available for a few weeks, “feeding sites” like Park View Rec Center that offer free, healthy meals between June and August say the crowds have been bigger than usual this summer. 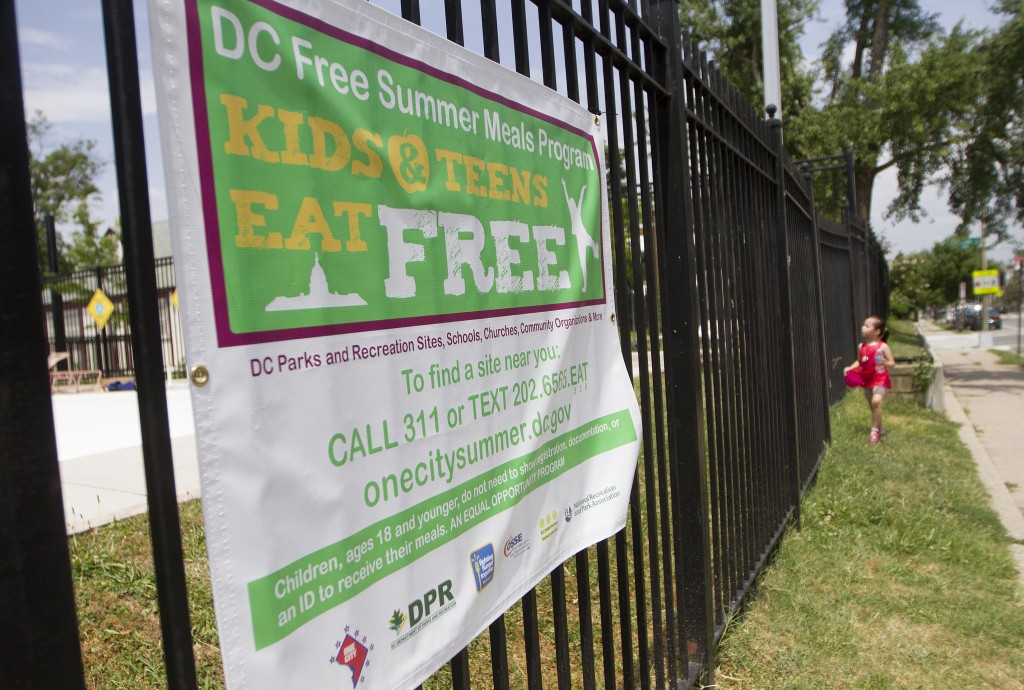 The Park View Rec Center offers free lunches for all children in this low-income area of Washington. Photo by Margaret Myers/NewsHour

The neighborhoods surrounding the U.S. Capitol building face some of the highest rates of poverty in the nation. During the academic year, 76 percent of children in D.C. Public Schools receive free and reduced-price breakfast and lunch. East of the Anacostia River — in the poorest parts of town — it’s closer to 99 percent.

The number of D.C. families considered “food insecure” — the government’s definition for those who don’t always know where their next meal is coming from — is so high that officials here are often more apprehensive to close schools on a Monday when it snows. For families without enough food in the refrigerator, an extra day of weekend often mean an extra day of hunger, said Alexandra Ashbrook, director of the nonprofit D.C. Hunger Solutions.

“So you can imagine, when schools close for the summer and we have eight or so weeks where there are no school meals, that it’s a crucial time to intervene to make sure kids can get the nutrition they need to grow,” she said.

To fill the gap, the D.C. Department of Parks and Recreation manages more than 200 feeding sites throughout the city. Elsewhere in the District, churches, libraries, schools and local nonprofits open their doors daily for free activities and food. 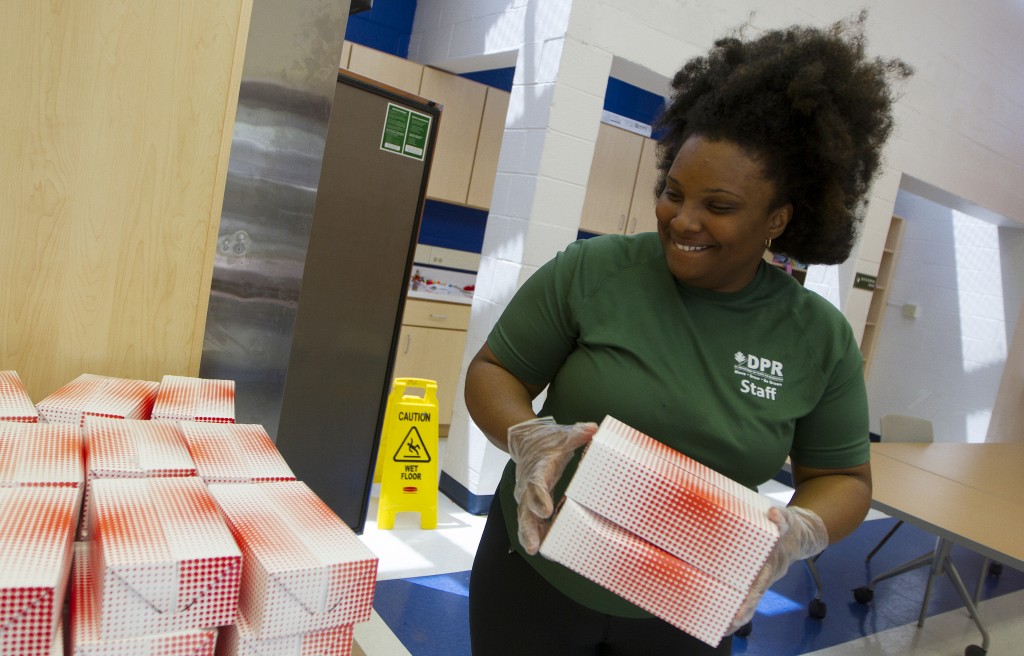 The USDA pays for the summer meals, but nationwide, only about 3.5 million children eat them. That’s compared to 21 million kids who receive free and reduced-cost lunch during the school year, leaving a gap of more than 16 million kids throughout the nation who likely don’t have access to healthy food on a regular basis.

Much of it comes down to a numbers game, Concannon said. While there are 99,000 schools in the U.S. that serve free and reduced-price meals during the school year — many feeding around 400 kids — only 42,000 sites offer summer meals. And those sites typically have a capacity for 40 to 50 children.

Added, of course, are the logistical challenges: “In rural areas, those yellow school buses just aren’t running in the summer,” Concannon said. “And in some cities, where gang problems or violence are big issues, parents are fearful of letting their kids leave the house during the day.” 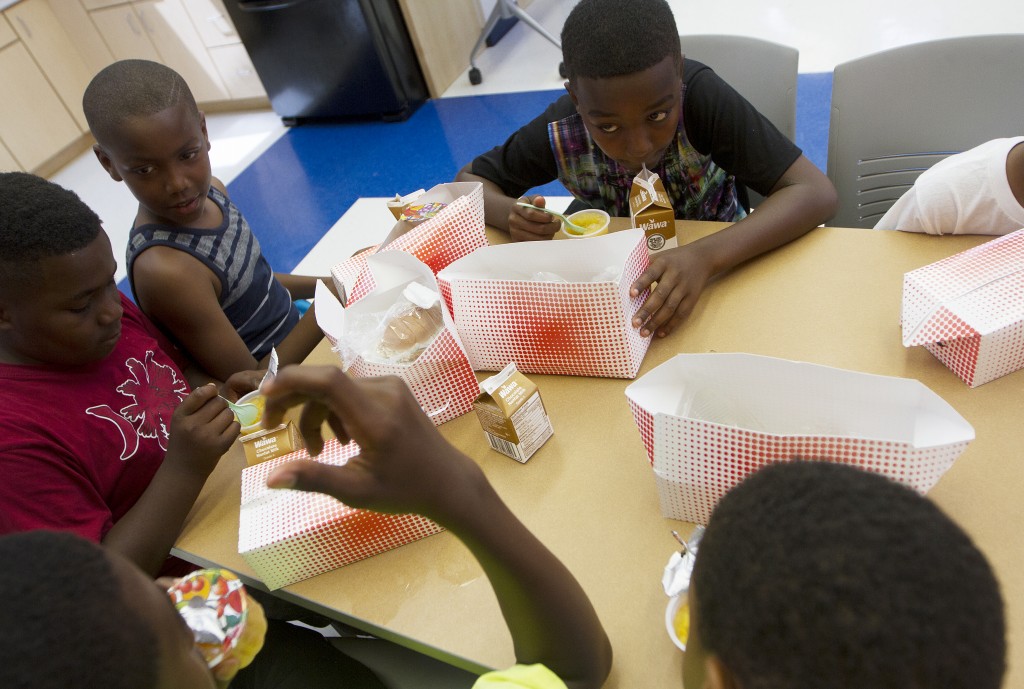 The USDA funds the summer meals program across the nation. Photo by Margaret Myers/NewsHour

By far, D.C. reaches the largest percentage of kids with this programming, Ashbrook said. For every 100 students who eat free or reduced-price lunch during the school year, 58 of them come for the free summer food.

City officials and nonprofit groups made a concerted push in recent years to drive up the number of families who know about these programs. They sent flyers home in backpacks, stuffed them into church bulletins and mailed them directly to parents. They convinced more nonprofit groups to open feeding sites in under-served areas, and they developed new communications systems to make it easier for families to find the program closest to home and sign up.

Most sites in the city, including all Parks and Recreation facilities, are considered “open,” meaning that even if a child isn’t enrolled in programming, they can still stop by during mealtimes for the free food. 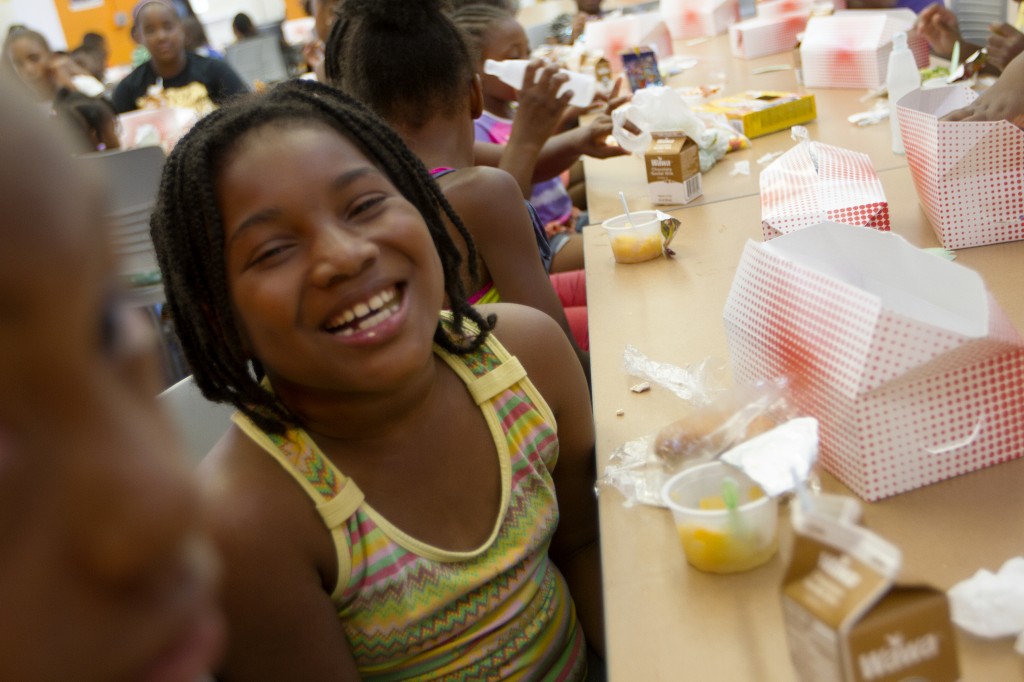 As junk food consumption rises, children gain weight three times faster during the summer months, often putting on as many pounds during the three months of summer as they do during the entire school year, research shows. Skipping meals is common too.

Mark McCain, the chief program manager for the parks department’s food nutrition division, says it’s one of the reasons he enjoys the summer program so much; it’s a chance to expose children to food they wouldn’t otherwise try at home. 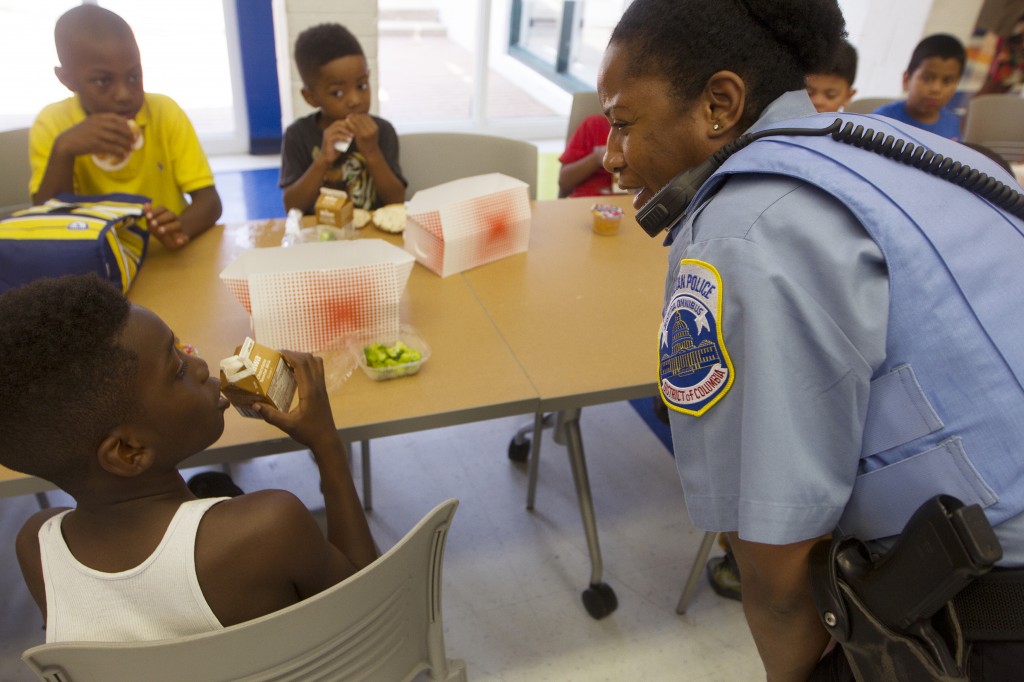 School Resource Officer Michelle Rose visits with some of her students who are attending summer camp at Park View Rec Center. Photo by Margaret Myers/NewsHour

Law enforcement officials say the impact of these programs go beyond nutrition. Officer Michelle Rose spends most of the year patrolling D.C. Public Schools, but in the summertime, she transitions to the “rec centers and other places where the kids tend to migrate.”

Before the push to open more summer feeding sites in D.C., she says police officers dealt with a lot more crime when school let out — mostly petty theft of things like cell phones and other small valuables.

“People don’t realize that they’re actually pawning the cell phones and getting money. And when the kids are arrested and debriefed, they’ll say, ‘I was hungry. I wanted to get something to eat,’’” she said. “So these programs actually help cut down on crime because they don’t have to opt to taking things from other people.” 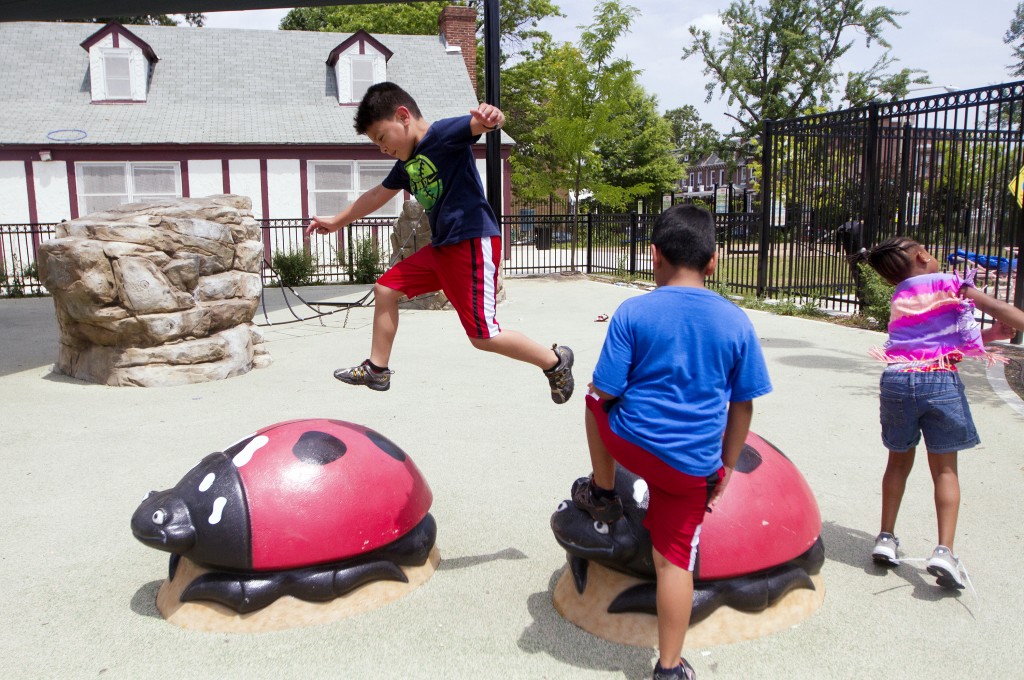 Children who attend summer camp at Park View Rec Center in Washington get their exercise, too. Six-year-old Jacob Portillo shows off his leaping skills for the camera and friends. Photo by Margaret Myers/NewsHour

For his part, Isaac Mejia still isn’t sure he would call the food at camp “good.” “I only like some of it,” he said. “I’d rather have chicken nuggets, fries or pancakes. And I’d much, much rather have pizza.”

But he’s heard that the fruits, vegetables and whole grain bread might make him taller and smarter. So he’s willing to keep giving it a shot.

Left: Six-year-old Jacob Portillo says he likes eating his broccoli at summer camp at Park View Recreation Center in Washington, D.C. The camp offers free lunches -- funded by the USDA -- to all participants and children in the community. For some, the meal fills a nutritional gap that's crucial during the summer months when kids are out of school. Photo by Margaret Myers/NewsHour