The type of anti-abortion law enacted by the state of Texas last month is deeply unpopular with Americans, according to a new poll from the PBS NewsHour, NPR and Marist. The novel legal strategy empowers private citizens to file civil suits against anyone who aids a person getting an abortion, rather than rely on a state agency to bar the medical procedure.

It’s one of several restrictive abortion laws that are making their way through the courts. Two of them, from Kentucky and Mississippi, will be considered by the Supreme Court this term, which begins Monday. 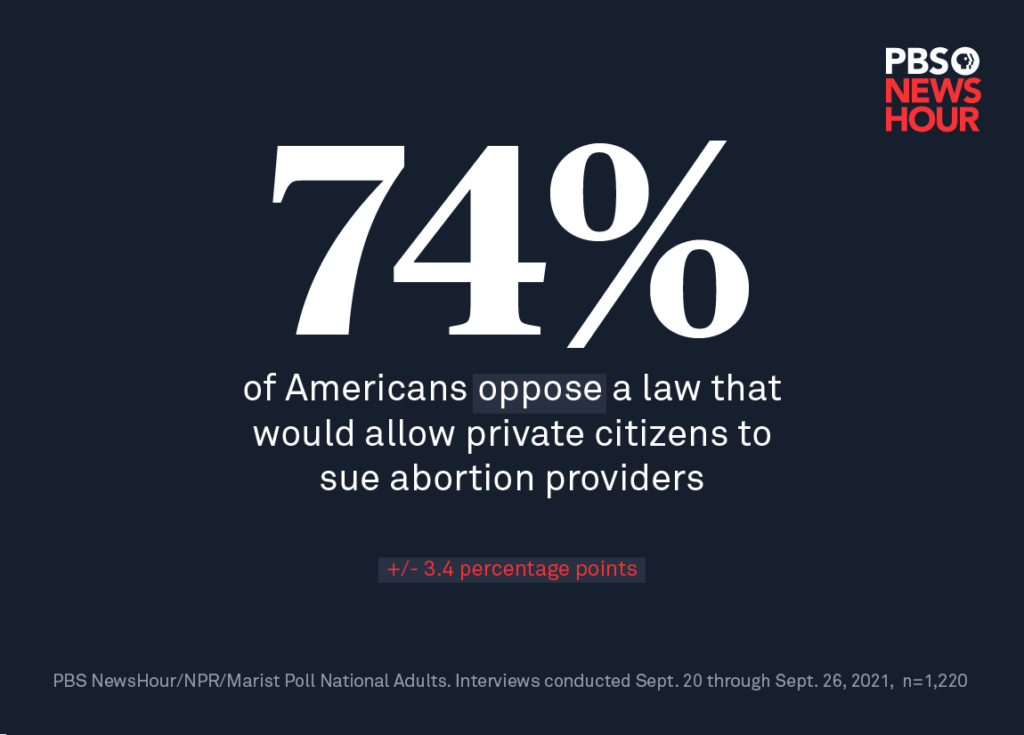 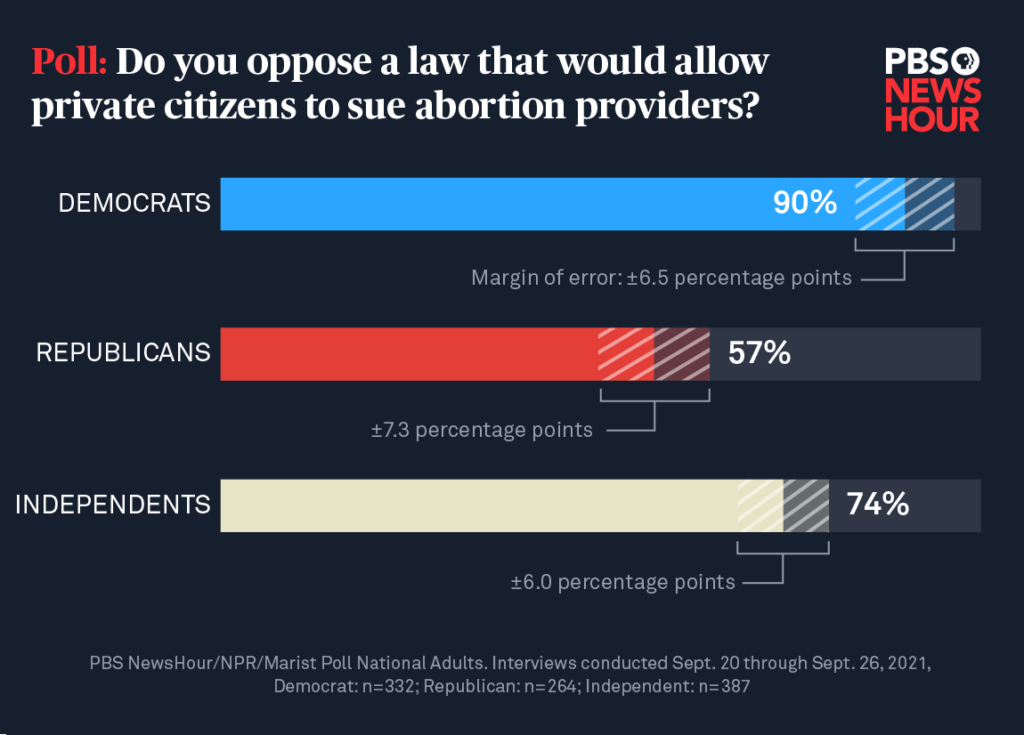 Barbara Carvalho, director of the Marist Poll, said that attitudes toward abortion have stayed relatively consistent. “There is a very significant consensus among Americans. Our debate generally tends to be at the extremes, so it tends to get framed as an all or nothing. And I think that there’s a consensus among Americans that abortion should be legal, but with significant restrictions,” she said.

This consistency holds when it comes to enforcing abortion restrictions, she added. While this particular question has not been asked before, previous polling had similar results when it came to enforcing or criminalizing abortion, she said.

Poll respondent Joan Garnand, a Tennessee Republican, said she is completely opposed to abortion, and does not like this type of law because it could encourage opportunists to file lawsuits (those who sue and win can collect $10,000, and their legal fees can be reimbursed). She said she would support a law where the biological father or family could sue because they are directly connected to the terminated pregnancy.

Eric Johnson, a Republican who lives in New York, said he generally supports all anti-abortion laws, but he found the citizen enforcement component of Texas’ law too extreme. He added that abortions can’t simply be illegal, but that there need to be better options for people, like financial incentives, birth control access and a better foster care system.

Where Americans stand on abortion

Texas is far from the first state to attempt to make abortion illegal after six weeks, the earliest point at which cardiac activity may be detected and before some people even know they are pregnant.

Carvalho said that it is important to note that while the majority of Americans are against banning abortion between six to eight weeks, a portion of them may be against it because they do not think abortion should be legal at all.

The Supreme Court begins a new term on Monday with a more conservative bench, and the future of abortion rights on the line.

The justices will hear arguments later this month in Cameron v. EMW Women’s Surgical Center, regarding a Kentucky law requiring that a fetus die in utero before a procedure known as “dilation and evacuation” can be performed during the second trimester. The court is not ruling on the law’s constitutionality, but examining a specific question: Whether the Kentucky attorney general can bring the case to the Supreme Court when no other state actors will defend the law. Law experts and abortion rights advocates say that decision could set the tone for future cases.

“It will give some indication about whether and to what extent the court is willing to basically overlook normal rules of procedure and ordinary processes in its eagerness to rule against abortion rights,” said Leah Litman, a constitutional law professor at the University of Michigan and podcast host of the Supreme Court-themed podcast Strict Scrutiny.

“[The court’s] authority comes from the public’s willingness to accept its decisions and the public’s belief that the court is legitimate.”

On Dec. 1, the court plans to hear arguments in its biggest abortion case of the term, over a Mississippi law than bans nearly all abortions after 15 weeks — a direct challenge to Roe v. Wade and Planned Parenthood v. Casey, which prevents states from imposing an “undue burden” on someone seeking an abortion.

Litman said Roe v. Wade could be overturned, but the high court could also allow states to ban abortions before viability without saying it overruled the landmark decision. “That would be extremely destabilizing to the law and open the floodgates for a bunch of abortion restrictions that are definitely not allowed now.”

If Roe v. Wade is overturned, abortion would be instantly illegal in a dozen states and greatly restricted in several others. The Texas law has already effectively ended abortions in that state and so far the Supreme Court has refused to block the law, due to its unique enforcement mechanism.

In the meantime, a federal judge will decide whether to halt the Texas abortion ban after the Biden administration argued in court on Friday that it violates women’s constitutional rights. Abortion providers in the state say damage has already been done — people have been forced to go to other states for find medical care, and even if the law is knocked down, physicians may be hesitant to resume their services. Legislators in other states, like Florida and Missouri, have said they plan to introduce similar abortion bans with civil enforcement.

“The practical effect of these laws will be to prohibit abortions, even though the Supreme Court hasn’t said and won’t necessarily say Roe was overruled,” Litman previously told the PBS NewsHour.

Around the nation, thousands of people, many of whom were motivated by the Texas law, joined a Women’s March on Saturday to protest abortion restrictions and urge the Supreme Court to uphold Roe v. Wade.

Litman said it’s hard to know if support for legal abortion will influence justices on the current bench, given its more conservative makeup. But how the court rules on such cases could affect public confidence.

“[The court’s] authority comes from the public’s willingness to accept its decisions and the public’s belief that the court is legitimate. And if that’s no longer the case, the court’s institutional authority is at risk,” she said.

Left: Supporters of reproductive rights take part in the nationwide Women's March, held after Texas rolled out a near-total ban on abortion procedures and access to abortion-inducing medications, in Brownsville, Texas, on Oct. 2, 2021. Photo by REUTERS/Veronica Cardenas

Chloe Jones is the Roy W. Howard fellow for the PBS NewsHour. Connect with her at cjones@newshour.org or on Twitter @chloeleejones.