What Oklahoma’s landmark opioid ruling could mean for other states

A ruling from a judge in Oklahoma that marketing tactics used by pharmaceutical giant Johnson & Johnson contributed to the opioid crisis could signal what’s ahead for other drug companies facing lawsuits across the country.

This decision — which requires the the company and and its subsidiary Janssen pay the state more than $572 million — marks the end of two years of legal wrangling in Oklahoma against drugmakers, and is the latest in a series of lawsuits from more than 2,000 communities in the U.S. against 22 drug distributors and manufacturers. The suits were aimed at chipping away at treatment costs and the individual and community damages tied to opioid use.

Some experts say it could begin the kind of legal dismantling the tobacco industry experienced in the 1990s.

Since 1999, more than 702,000 Americans have died from an opioid overdose. In 2017 alone, more than 48,000 Americans fatally overdosed on opioids, according to data from the Centers for Disease Control and Prevention — accounting for more than two-thirds of all drug overdose deaths nationwide that year. In Oklahoma, 388 people died after using opioids in 2017,a rate of 10.2 per 100,000 deaths.

What does the decision mean?

Because it initiated the suit, Oklahoma had to prove the pharmaceutical companies promoted the use of prescription opioids in a way that caused a “public nuisance” and spawned a public health crisis — and it did, Judge Thad Balkman said as he read his decision in court Monday.

“The opioid crisis has ravaged the state of Oklahoma,” Balkman said while reading out his judgment. “It must be abated immediately.”

“Our nation’s overdose crisis has roots in the overprescribing of opioids.”

The abatement amounted to far less than the $17 billion Oklahoma Attorney General Mike Hunter argued the state should receive from the drug company and its subsidiary company. The final $572 million was “based on particulars of the nuisance claim and the evidence presented at trial,” Balkman said.

“There’s no question in my mind these companies knew what was going on at the highest level,” Oklahoma Attorney General Mike Hunter said after the judge read his decision. “They just couldn’t quit making money from it. That’s why they’re responsible.”

MORE: America Addicted: How can the epidemic be stopped?

Johnson & Johnson “did not cause the opioid abuse crisis here in Oklahoma or anywhere here in this country” and will appeal the decision, said Sabrina Strong, an attorney representing the company and its subsidiary, at a news conference after the ruling. She argued that the public nuisance law that was used in this case has not been applied outside the context of property disputes and therefore raised concern over due process.

“You can’t sue your way out of the opioid abuse crisis,” she said during a separate press conference that followed the judge’s ruling.

The growing number of overdoses and deaths tied to opioids in the U.S. sparked public outrage on a number of fronts, but particularly around the role drug manufacturers and distributors played in getting prescription opioids into people’s lives and, in some cases, making them easily accessible.

This latest lawsuit was first of its kind filed nationwide in 2017. But the state has taken a number of actions against drug makers.

In March, Purdue Pharmaceuticals paid Oklahoma $270 million to settle a similar lawsuit against the drug company for the role it played in perpetuating the opioid crisis. Two months later, Israeli-based Teva Pharmaceuticals also settled with Oklahoma for $85 million in a lawsuit the state raised on the same grounds.

READ MORE: What Purdue Pharma’s settlement with Oklahoma means for the opioid crisis

All told, Monday’s abatement adds up to “almost $1 billion to help the people in the state,” Hunter said. In these lawsuits and in Hunter’s statements today, the money is to help fund treatment for Oklahomans struggling with opioid use. 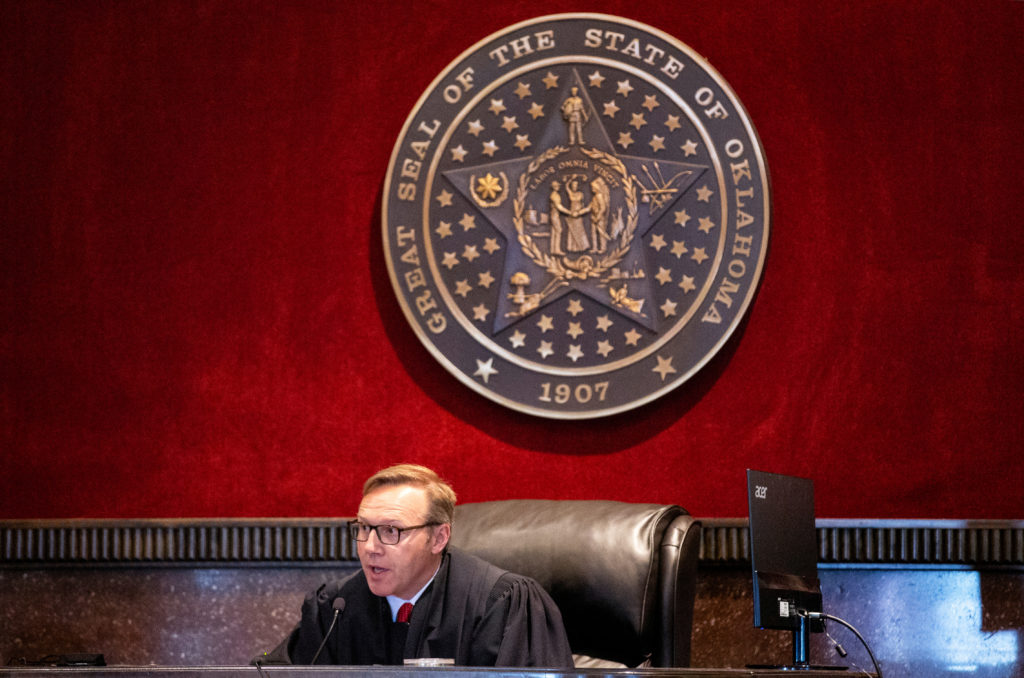 Judge Thad Balkman speaks as he starts trial of Johnson & Johnson over claims they engaged in deceptive marketing that contributed to the national opioid epidemic l at the Cleveland County Courthouse in Norman, Oklahoma, U.S. May 28, 2019. Chris Landsberger/Pool via REUTERS

“People focus on the size of the monetary settlement, but the more important component of lawsuits are whether the pharmaceutical industry enters into new, binding, covenants regarding its future behavior,” said Keith Humphreys, a psychologist and professor at Stanford University who served as drug policy adviser for the Obama and Bush administrations. “Otherwise, they will just write a check and continue going about their business.”

The judge’s decision in Oklahoma was no surprise to Scott Hadland, a pediatrician and addiction specialist at Boston Medical Center’s Grayken Center for Addiction. He has researched how the pharmaceutical industry’s marketing practices may have laid the groundwork for rising overdose deaths. Companies marketed prescription opioids to doctors in regions where opioid use had become problematic, he said, perpetuating a cycle of use.

“Our nation’s overdose crisis has roots in the overprescribing of opioids,” Hadland said.

Eyes are now turning to Ohio where a judge is expected to rule later this year in that state’s lawsuits against drug companies over opioids. In February, the state of Ohio sued four pharmaceutical companies — McKesson Corp., Cardinal Health and its subsidiaries, AmerisourceBergen Drug Corp. and Miami-Luken — for negligence.

READ MORE: Almost half of all opioid misuse starts with a friend or family member’s prescription

According to the state’s lawsuit, the drug distributors flooded Ohio with prescription opioids. Drug makers have to prevent drug diversion, or the misuse of prescription medications they manufacture and distribute. So when pharmaceutical companies flooded the market with billions of prescription opioids, the suit claims, they raised the risk that these drugs would be overused, that people may overdose and die. In a 2017 study, 60 percent of U.S. adults who said they misused opioids said they had no prescription. Among those surveyed, 41 percent said they got their opioids from a friend or relative.

The lawsuits in Ohio hold the potential to replicate for opioids what the legal takedown in the 1990s did to tobacco companies, Humphreys said.

The lawsuits in Ohio hold the potential to replicate for opioids what the legal takedown in the 1990s did to tobacco companies.

But so far, settlements against drug companies have amounted to little more than “check writing,” Humphreys said. States must also be held accountable in how they spend money they receive from drug companies, he added, saying that “often didn’t happen with tobacco settlement funds.”

If a pharmaceutical company enters “new, binding covenants regarding its future behavior,” Humphreys said that could hold greater potential for meaningful change.

Left: Bottles of prescription painkiller OxyContin, 40mg, 20mg and 15mg pills, made by Purdue Pharma L.D. sit on a counter at a local pharmacy, in Provo, Utah. Photo by George Frey/Reuters