When it comes to coronavirus risks, Americans are divided over indoor sports

As temperatures drop in much of the United States, American sports enthusiasts are likely weighing the risks of playing indoors during the worst surge of the coronavirus pandemic so far. A majority of Americans – 58 percent – say that people should not participate in indoor team sports this winter, according to the latest PBS NewsHour/NPR/Marist poll, revealing a major divide between Democrats and Republicans on this health question.

The groups most concerned about risks of the coronavirus included women, people who live in the Northeast, Democrats, baby boomers and people over the age of 74, with at least 62 percent of each group disapproving of indoor team sport participation. In contrast, men, people who live in the South, Gen Xers and Republicans more heavily responded that people should play indoor team sports, with upwards of 41 percent of each group in favor.

Coronavirus infection rates continue to spike, with daily new cases reaching nearly 220,000 in the United States, while the overall national death toll has exceeded 289,000, according to Johns Hopkins University. Public health experts have warned that gatherings that take place indoors with poor ventilation are the most likely environments to spread the virus, and notable coronavirus outbreaks this fall have been linked to indoor sports. Heavy breathing, screaming and spitting release the virus in tiny bioaerosol particles, which can hang around for longer in cold and dry air, like in ice rinks. 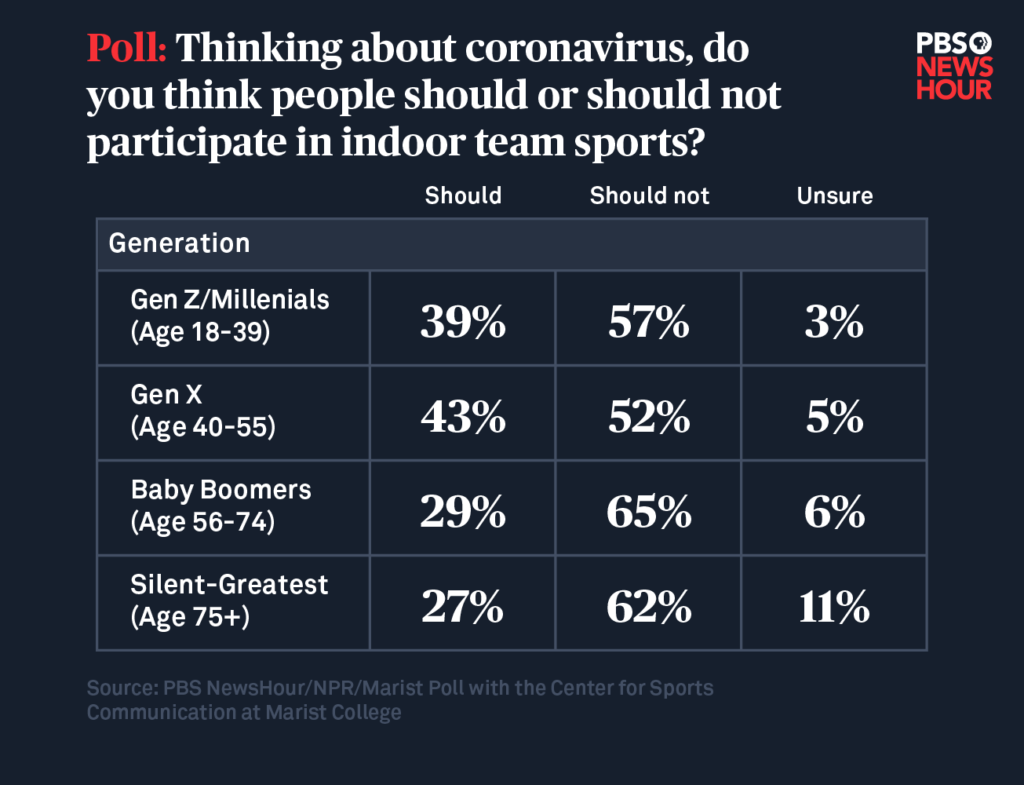 Massachusetts saw more than 100 cases from youth ice hockey in a few days, and entire ice hockey teams in New Hampshire are now getting quarantined and tested. Professional sports teams have struggled to keep players safe, even with frequent testing and strict safety protocols from leagues.

“We’re returning to indoor sports at a phase of the pandemic we’ve never seen before,” said Dr. Mark Cameron, an emerging infectious disease researcher at Case Western Reserve University. “If you’ve got cases in individuals, asymptomatic cases in particular, coronavirus will take every opportunity to spread.”

While Cameron is generally supportive of back-to-play plans, he said it’s hard for him to be optimistic about enacting indoor sports right now as coronavirus case numbers spike. “The question is when and how we do this safely,” he said.

Jane McManus, director of Marist’s Center for Sports Communication, said that these polls were pretty emphatic in showing that fans feel that such activities should be modified for safety. Fifty-eight percent of U.S. adults agreed that the government should be able to impose restrictions on indoor sports teams because of the coronavirus, with the same percentage of self-reported sports fans in agreement.

Since the start of the pandemic, the Trump administration has come out strongly in favor of sports participation during the pandemic. Back in April, President Donald Trump held calls with multiple sports commissioners and publicly urged professional sports leagues to reopen. At an April 4 news briefing, he said he wanted “fans back in the arenas” for this year’s NFL season. In August, Trump tweeted in support of resuming college football season, even as Dr. Anthony Fauci, the nation’s top infectious disease expert, cautioned against it in an interview that month with PBS NewsHour managing editor and anchor Judy Woodruff. 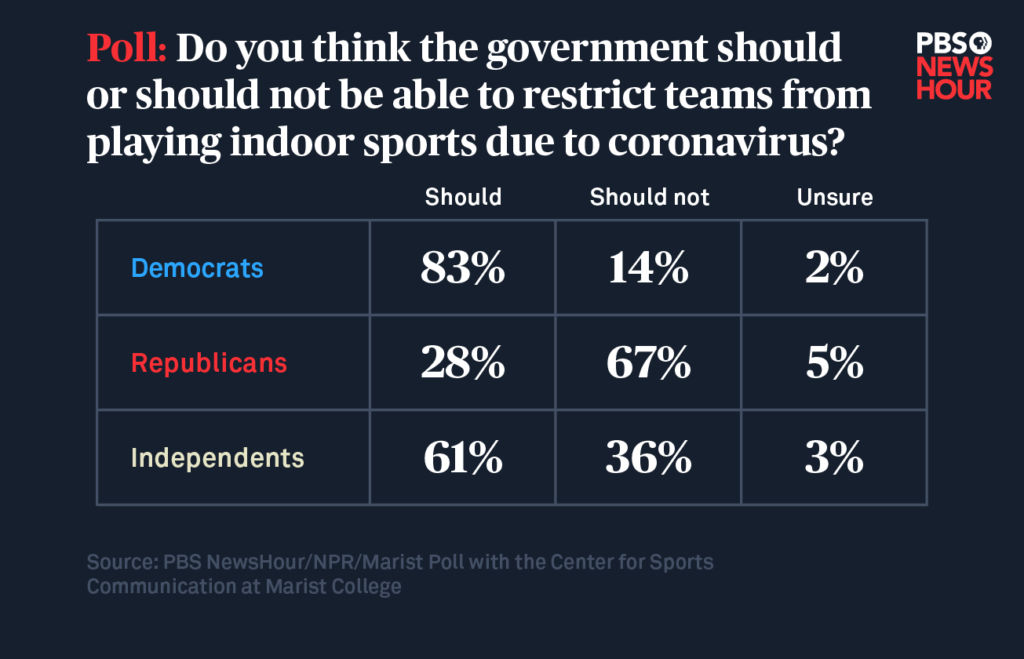 Although the Centers for Disease Control and Prevention hasn’t updated its recommendations for playing sports since August, it provides guidance for youth sports: Wear a mask, avoid other players, disinfect high-touch surfaces and compete within your local community when possible.

The Super Bowl is another source of disagreement between parties. When asked about attendance at the nation’s most-watched sporting event, one-third of Republicans said that fans should be allowed in the stands without any restrictions, while 68 percent of Democrats and 49 percent of independents said that attendance should be prohibited.

A Marist poll from October on sports viewership habits found that 46 percent of self-described sports fans watched less sports earlier this fall amid the pandemic than in the past.

“You would think that when you have more time to watch sports, people would be rushing to their TV sets to be able to watch all these sports they were missing,” McManus said. “And when sports came back, that just didn’t happen.”

According to that poll, the reasons for decreased viewership greatly varied by party. Seventy percent of Republicans said athletes’ calls for racial justice caused them to watch less sports, while 61 percent of Democrats and a plurality of independents (47 percent) said that it had not changed their viewing habits. In fact, about three in 10 Democrats said that they actually tuned in more often as a result of increasingly outspoken players.

“[These polls are] telling us the same story, which is that times are not normal,” McManus said. “People are not going to be watching sports or participating in sports the way that they normally would. This data is telling us that it’s having that effect because people are aware of what the coronavirus can do to their communities.”

McManus added that the decision makers in the sports world definitely take health considerations into account, “But I don’t think the decisions are being made based on that alone. They’re financial decisions.”

Left: Ice hockey is a risky indoor sport, as the cold and dry air allows for bioaerosols containing the coronavirus to hang around for longer. (Image credit: Shaun Best for Reuters)