BARCELONA, Spain — The confirmed global death toll from the COVID-19 virus reached at least 400,000 fatalities on Sunday, a day after the government of Brazil broke with standard public health protocols by ceasing to publish updates of the number of deaths and infections in the hard-hit South American country.

Worldwide, at least 6.9 million people have been infected by the virus, according to Johns Hopkins University, whose aggregated tally has become the main worldwide reference for monitoring the disease. Its running counter says United States leads the world with nearly 110,000 confirmed virus-related deaths. Europe as a whole has recorded more than 175,000 since the virus emerged in China late last year.

Health experts, however, believe that the John Hopkins tally falls short of showing the true tragedy of the pandemic.

Many governments have struggled to produce statistics that can reasonably be considered as true indicators of the pandemic given the scarcity of diagnostic tests especially in the first phase of the crisis. Authorities in Italy and Spain, with over 60,000 combined deaths, have acknowledged that their death count is larger than the story the numbers tell.

But Brazilian President Jair Bolsonaro went as far as to tweet on Saturday that his country’s disease totals are “not representative” of Brazil’s current situation, insinuating that the numbers were actually overestimating the spread of the virus.

Critics of Bolsonaro, who has repeatedly clashed with health experts over the seriousness of the disease and has threatened to take Brazil out of the World Health Organization, said the decision was a maneuver by the hardman-style leader to hide the depths of crisis. 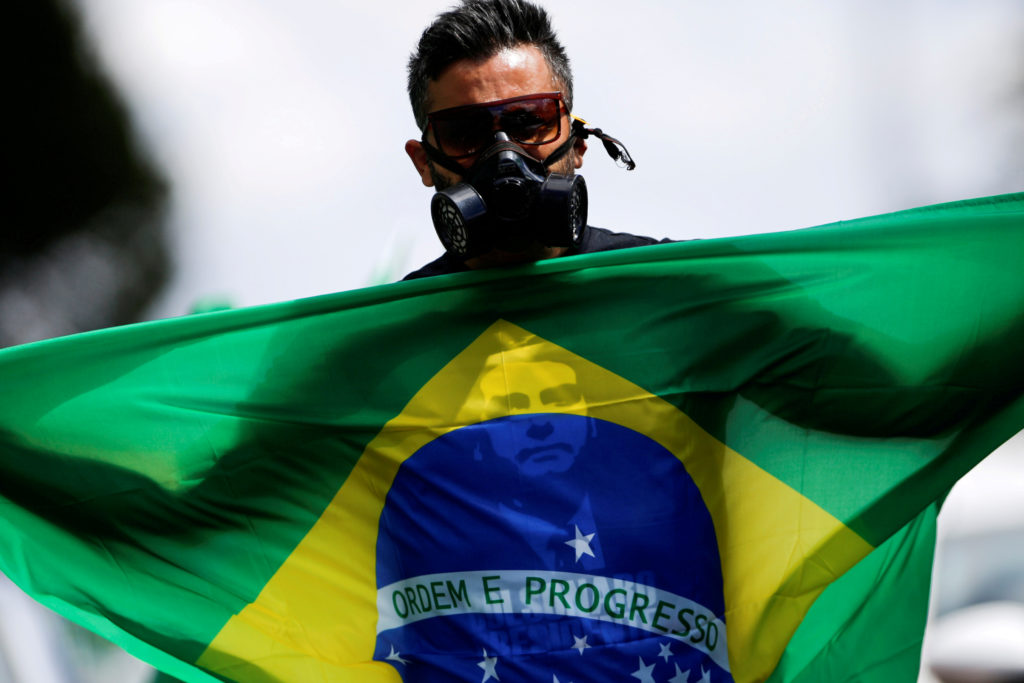 A demonstrator wearing a protective face mask takes a part in a motorcade to protest in favor of Brazillian President Jair Bolsonaro, amid the coronavirus disease (COVID-19) outbreak, in Brasilia, Brazil April 26, 2020. Photo by Adriano Machado/ Reuters.

Brazil’s last official numbers recorded over 34,000 virus-related deaths, the third-highest toll in the world behind the U.S. and Britain. It reported nearly 615,000 infections, putting it second behind the U.S.

After Bolsonaro stoked his clash with health experts, Pope Francis cautioned people in countries emerging from lockdown to keep following authorities’ rules on social distancing, hygiene and limits on movement.

The Argentine-born pontiff has also expressed dismay that the virus is still claiming many lives, especially in Latin America.

Francis was clearly delighted to see several hundred people gathered below his window in St. Peter’s Square on Sundays for the pope’s noon blessing after Italy eased its restrictions on public gatherings.

Many counties like the U.S. and Britain insist that they can ease restrictions before having stalled their outbreaks.

In the U.S., the virus churns on underneath the unrest provoked by the death of George Floyd and increasingly directed at President Donald Trump’s handling of the protests.

On Sunday, the U.K. revealed that places of worship can reopen from June 15 — but only for private prayer.

Worries have surfaced over the past couple of weeks that Prime Minister Boris Johnson’s government is easing the restrictions too soon, with new infections potentially still running at 8,000 a day. As things stands, nonessential shops, including department stores, are due to reopen on June 15.

Professor John Edmunds, who attends meetings of the British government’s Scientific Advisory Group for Emergencies, said the epidemic “is definitely not all over” and that there is an “awful long way to go.”

In France, the government announced that from Tuesday, it will ease restrictions limiting travel from the French mainland to overseas territories in the Caribbean and Indian Ocean.

Spain is preparing to take another step forward in the scaling back of its containment with Madrid and Barcelona opening the interiors of restaurants with reduced seating on Monday. 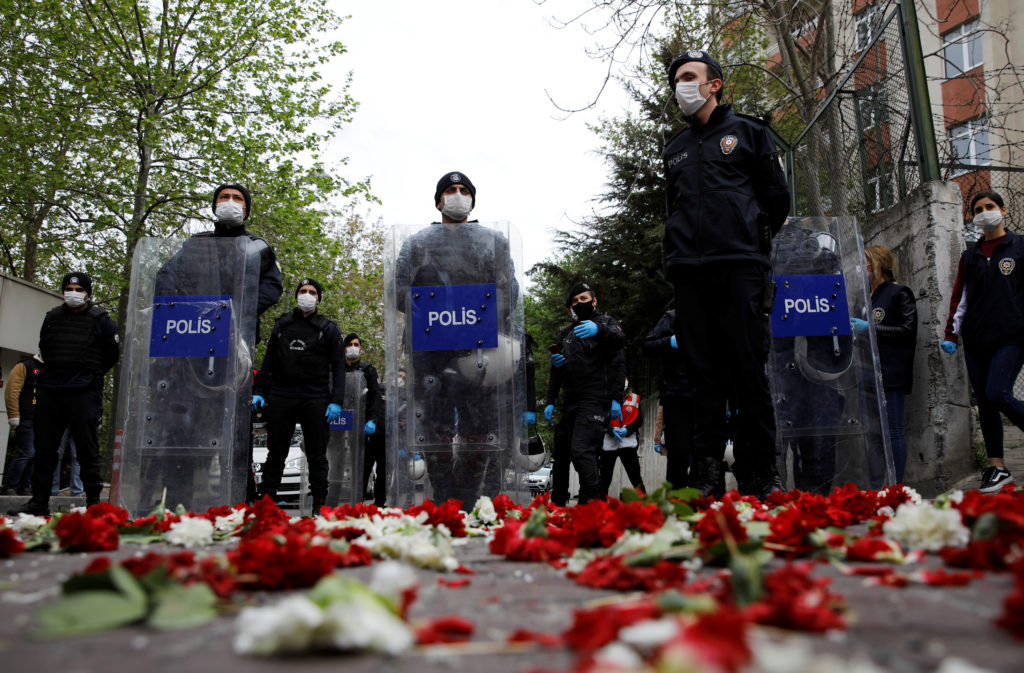 Carnations are seen spread on the ground in front of Turkish police officers as trade union leaders attempt to defy a ban and march on Taksim Square to celebrate May Day, during a three-day curfew amid the spread of the coronavirus disease (COVID-19), in Istanbul, Turkey, May 1, 2020. Photo by Umit Bektas/ Reuters.

In Turkey, Istanbul residents flocked to the city’s shores and parks on the first weekend with no lockdown, prompting a reprimand from the health minister.

Russia remained troubling, with nearly 9,000 new cases over the past day, roughly in line with numbers reported over the past week.

India confirmed 9,971 new coronavirus cases in another biggest single-day spike, a day before it prepares to reopen shopping malls, hotels and religious places after a 10-week lockdown.

China has reported its first non-imported case in two weeks, an infected person on the island of Hainan off the southern coast.

Left: Pope Francis waves to people at St Peter's Square after the Regina Coeli prayer, which was held without public participation due to the coronavirus disease (COVID-19) outbreak, at the Vatican May 10, 2020. Photo by Vatican Media via Reuters.