What young Americans think about vaccines and mandates

Young people in the United States broadly support COVID-19 vaccine mandates to support in-person learning and work, and a majority believe that getting vaccinated is — at least in part — an obligation we owe to each other, according to a new poll among 13- to 29-year-olds from the PBS NewsHour and Generation Lab.

And even though their lives have been upended, most Gen Zers and millennials say they do not feel more stressed now than they were before the pandemic, suggesting that hardships have perhaps reinforced resiliency for Americans under 30. 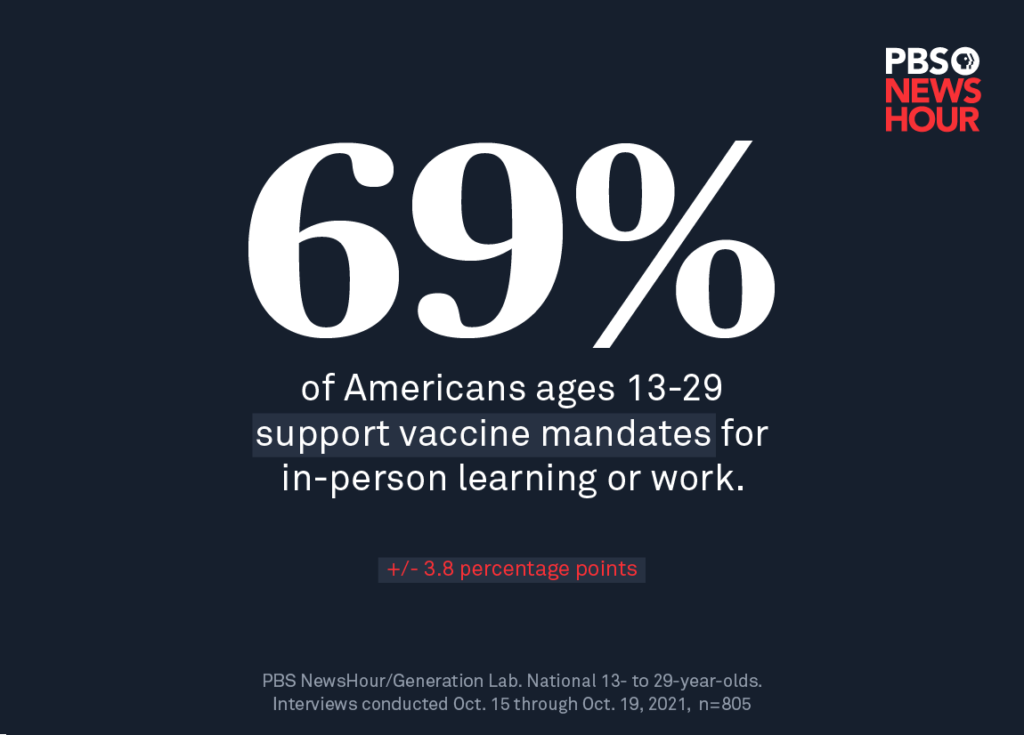 Vaccinations have been slowly ticking upward in recent months — more than 221 million Americans have received at least one vaccine dose, according to the latest data from the Centers for Disease Control and Prevention. Not only have more young people become eligible since the spring, but vaccine requirements for large employers, educators, federal workers and health care providers have helped boost rates. Last month, California Gov. Gavin Newsom announced that all K-12 students in his state will have to get vaccinated in 2022 to attend school in person. On Thursday, new government rules about vaccine mandates were finalized for employers with 100 or more employees. Those rules go into effect on Jan. 4.

Immunization rates also picked up in parts of the country after the highly transmissible delta variant fueled a devastating surge of new cases, hospitalizations and deaths, especially among the unvaccinated, many of whom were young people. By late July, just a third of adolescents and young adults were fully vaccinated, according to a pair of CDC studies. In some states back in August, people under 45 made up more than half of new infections, and federal data suggests young Americans remain one of the least vaccinated groups in the country, compared to about 98 percent of Americans age 65 or older who have received at least one vaccine dose.

When looking at a wider swath of age groups, a Sept. 30 PBS NewsHour/NPR/Marist poll found that Americans were split in their support of employers requiring vaccines for in-person work — 48 percent backed such measures and another 46 percent opposed them. People between ages 18 and 40 were slightly less likely in that poll to support vaccine mandates than the overall adult population.

Is the choice to get vaccinated about you or others? 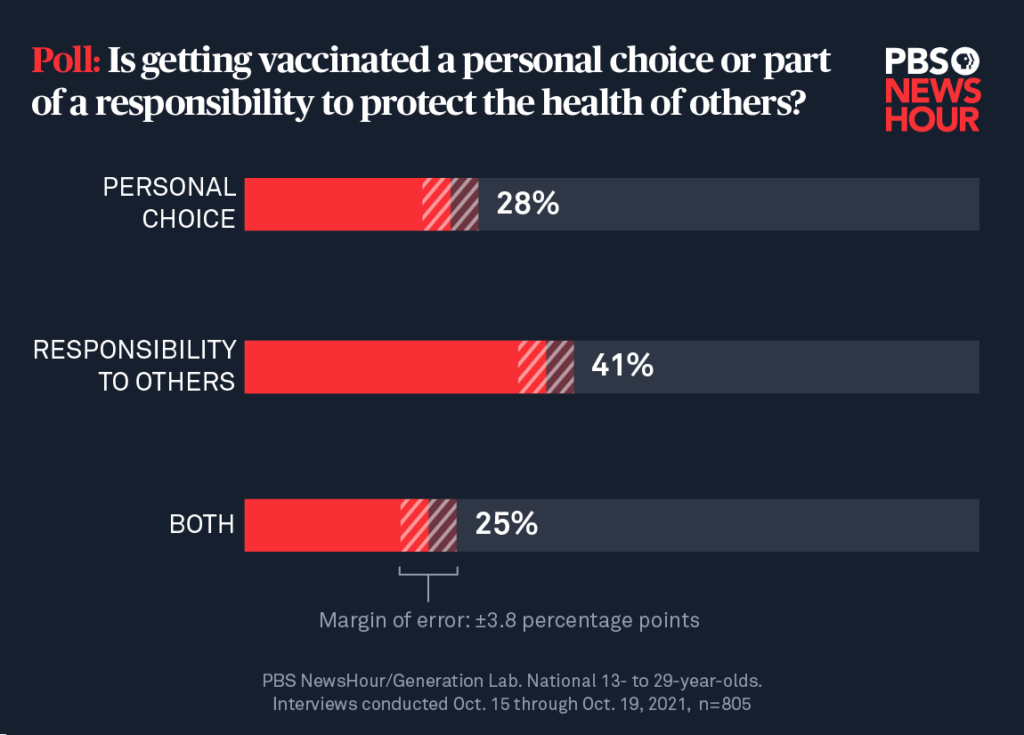 For some, the debate over getting vaccinated to end the COVID-19 pandemic has come down to a choice between individualism or a sense of responsibility to others.

With two-thirds of young people saying that a sense of civic responsibility factors into their attitudes about vaccines, these latest poll results suggest that most young people in the U.S. understand “vaccination is not just about you. It’s about everyone around you,” said Dr. Leana Wen, Baltimore’s former commissioner for public health.

Stress and the pandemic

Thinking about how stressed they were before the coronavirus pandemic … 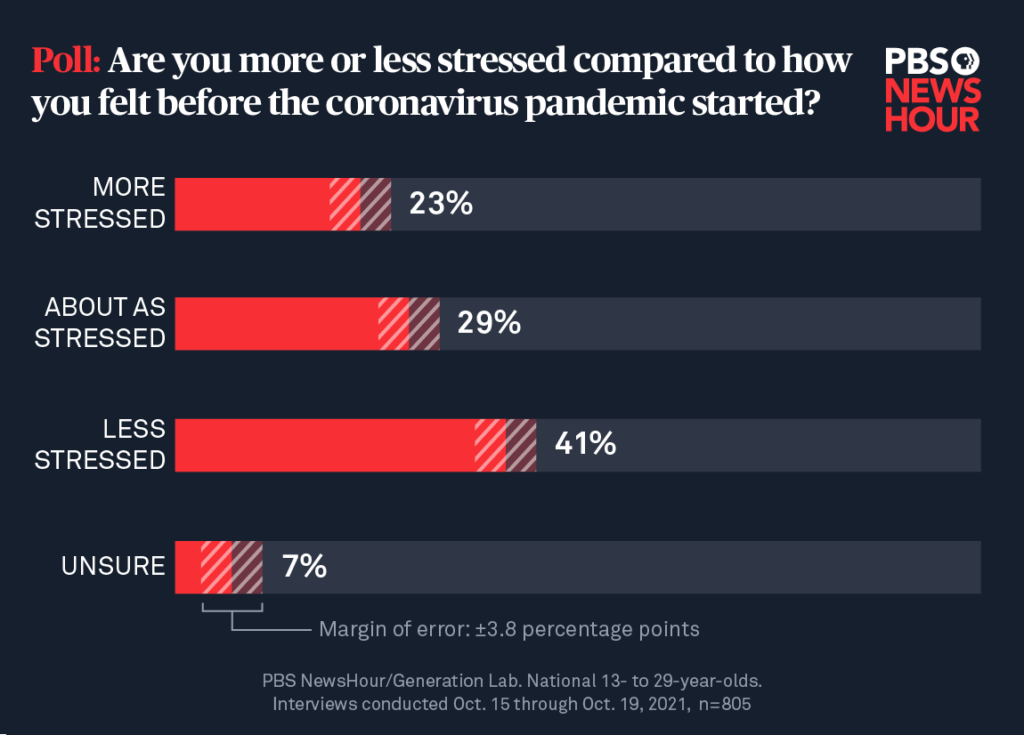 The coronavirus pandemic has summoned great concern about the state of mental health in the U.S., including among young people. Months before vaccines were available for kids as young as 5, health and education experts were saying schools needed to resume in-person instruction to improve educational and social development and narrow disparities in access to supports that millions of U.S. students had to forgo during the pandemic. Young people missed out on major milestones like prom or graduations, while others tried to launch their professional lives remotely, had to delay or divert their careers, or move back in with family.

When it comes to this era, “Young folks are super aware of the life events, experiences and friendships that have been taken away from them, in addition to the damage globally,” said Cyrus Beschloss, the founder of Generation Lab.

The pandemic has put youth under intense strain, with 140,000 children enduring the death and loss of their primary or secondary caregiver. And stress, especially on younger Americans, has manifested in different ways. According to a June 18 report from the CDC, emergency department visits tied to mental health rose 31 percent among adolescents in 2020 compared to the previous year. Drug overdose deaths surged in 2020. But suicides declined, defying expectations, and some experts suggest the data do not yet portray such a dire picture for young people.

Those ripple effects of stress for young Americans are still revealing themselves as the pandemic drags on. But Wen said these poll responses for people who reported less stress “speaks to the resiliency of many” youth in the U.S.

Left: FILE PHOTO: A sign directs patients at a COVID-19 vaccination clinic on the University of Washington campus on May 18, 2021 in Seattle, Washington. Photo by David Ryder/Getty Images