Police: Ohio gunman who killed 9 was stopped in 30 seconds

DAYTON, Ohio — A masked gunman in body armor opened fire early Sunday in a popular entertainment district in Dayton, Ohio, killing nine people, including his sister, and wounding dozens before he was quickly slain by police, officials said.

Connor Betts, 24, was armed with a .223-caliber rifle with magazines capable of holding at least 100 rounds of ammunition and was gunned down about 30 seconds after his rampage began about 1 a.m. in the historic Oregon District, said Police Chief Richard Biehl.

After squeezing off dozens of shots, he was killed at an entrance to a bar where people were taking cover, Biehl said, adding that had Betts gotten inside, the result would have been “catastrophic.”

Police have not identified a motive in what was the second U.S. mass shooting in less than 24 hours.

Betts’ 22-year-old sister Megan was the youngest of the dead — all killed in a nightlife spot of bars, restaurants and theaters that is considered a safe area downtown, police said. 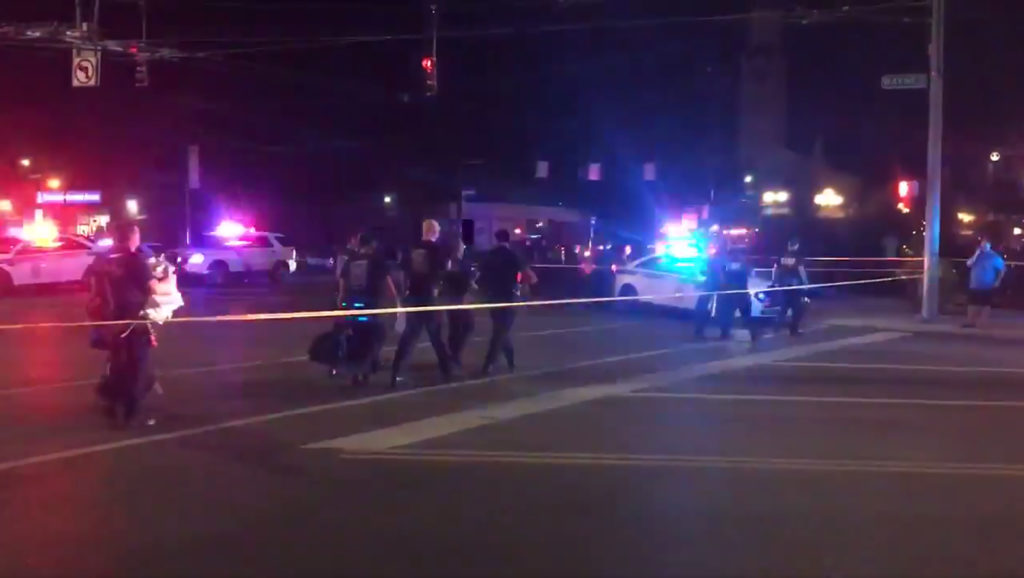 This videograb taken from the Twitter account of Derek Myers on August 4, 2019 shows police officers walking behind police cordon following a mass shooting in the popular bar and nightlife Oregon district in Dayton, Ohio. – Nine people were killed in a mass shooting early on August 4 in Dayton, Ohio, police said, adding that the assailant was shot dead by responding officers. Photo by Derek Myers/AFP/Getty Images

The gunman was white and six of the nine killed were black, police said. Although they’ll investigate the possibility of a hate crime, they said the quickness of the rampage made any discrimination in the shooting seem unlikely.

Mayor Nan Whaley said at least 27 more people were treated for injuries, and at least 15 of those have been released. Several more were in serious or critical condition, hospital officials said at a news conference Sunday morning. Some suffered multiple gunshot wounds and others were injured as they fled, the officials said.

Betts was from Bellbrook, southeast of Dayton. Bellbrook Police Chief Doug Doherty said he and his officers weren’t aware of any history of violence by Betts, including during high school.

Brad Howard said he went to school with Betts and had known him for two decades.

“He seemed like a good kid,” Cournoyer said. “He wasn’t a speed demon, didn’t do anything crazy. But that’s not to say, I mean, obviously he had an issue.”

“Nikita Papillon, 23, was across the street at Newcom’s Tavern when the shooting started. She said she saw a girl she had talked to earlier lying outside Ned Peppers bar, where Betts was slain at the entrance.

“She had told me she liked my outfit and thought I was cute, and I told her I liked her outfit and I thought she was cute,” Papillon said. She herself had been to Ned Peppers the night before, describing it as the kind of place “where you don’t have to worry about someone shooting up the place.”

“People my age, we don’t think something like this is going to happen,” she said. “And when it happens, words can’t describe it.”

Tianycia Leonard, 28, was in the back, smoking, at Newcom’s. She heard “loud thumps” that she initially thought was someone pounding on a dumpster.

“It was so noisy, but then you could tell it was gunshots and there was a lot of rounds,” Leonard said. 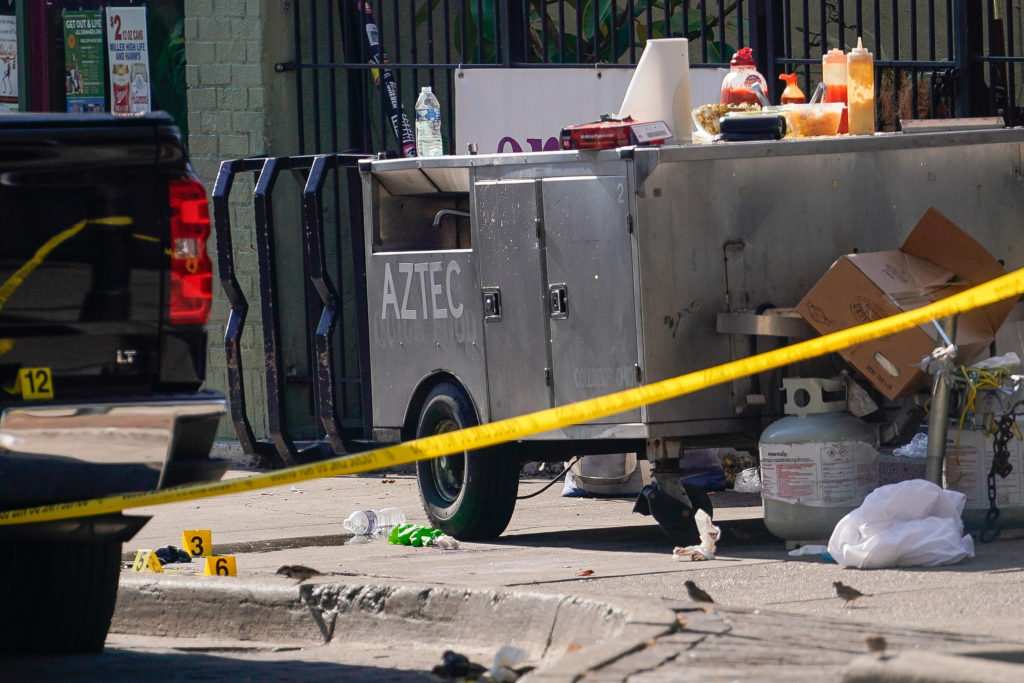 Evidence markers lay on the ground near a hotdog stand after a mass shooting in Dayton, Ohio, U.S. August 4, 2019. Photo by Bryan Woolston/Reuters

Staff of an Oregon District bar called Ned Peppers said in a Facebook post that they were left shaken and confused by the shooting. The bar said a bouncer was treated for shrapnel wounds.

A message seeking further comment was left with staff.

President Donald Trump was briefed on the shooting and praised law enforcement’s speedy response in a tweet Sunday. The FBI is assisting with the investigation.

Gov. Mike DeWine visited the scene after earlier ordering that flags in Ohio remain at half-staff.

DeWine, a Republican, said policymakers must now consider: “Is there anything we can do in the future to make sure something like this does not happen?”

Both of Ohio’s two U.S. senators visited the scene of the mass shooting. Democratic Sen. Sherrod Brown said responding with thoughts and prayers wasn’t enough and stronger gun safety laws are needed. Republican Sen. Rob Portman said the discussion must include not just policy changes, but issues such as mental health supports.

Whaley said more than 50 other mayors also have reached out to her.

A family assistance center was set up at the Dayton Convention Center, where people seeking information on victims arrived in a steady trickle throughout the morning, many in their Sunday best, others looking bedraggled from a sleepless night. Some local pastors were on hand to offer support, as were comfort dogs.

The Ohio shooting came hours after a young man opened fire in a crowded El Paso, Texas, shopping area, leaving 20 dead and more than two dozen injured. Just days before, on July 28, a 19-year-old shot and killed three people, including two children, at the Gilroy Garlic Festival in Northern California.

Sunday’s shooting in Dayton is the 22nd mass killing of 2019 in the U.S., according to the AP/USA Today/Northeastern University mass murder database that tracks homicides where four or more people were killed — not including the offender. The 20 mass killings in the U.S. in 2019 that preceded this weekend claimed 96 lives.

Whaley said the Oregon District has reopened, and a vigil is planned Sunday evening. The minor league Dayton Dragons who play in nearby Fifth Third Field postponed their Sunday afternoon game against the Lake County Captains “due to this morning’s tragic event.”

The shooting in Dayton comes after the area was heavily damaged when tornadoes swept through western Ohio in late May, destroying or damaging hundreds of homes and businesses.

“Dayton has been through a lot already this year, and I continue to be amazed by the grit and resiliency of our community,” Whaley said.