WASHINGTON — President Donald Trump said he never called John McCain a loser — he did — and denigrated the record of the late Republican senator on veterans affairs despite routinely appropriating one of McCain’s crowning achievements on that front as his own.

Trump distorted events in Kenosha, Wisconsin, over the past week and his own hand in them before a furor over his reported comments on fallen soldiers diverted his rhetoric.

Democratic rival Joe Biden claimed to have been the first person to have called for the use of emergency production powers in the pandemic, when he was not. 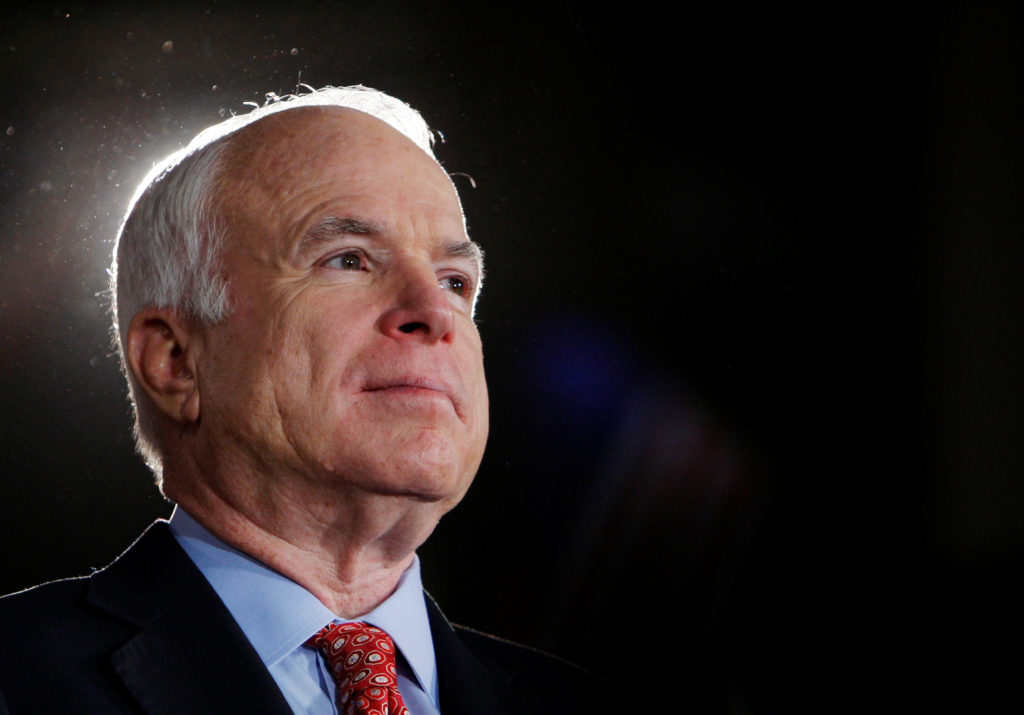 Republican presidential nominee Senator John McCain (R-Ariz.) listens as he is being introduced at a campaign rally in Denver, Colorado. Photo by Brian Snyder/Reuters

TRUMP: “I was never a big fan of John McCain, disagreed with him on many things including ridiculous endless wars and the lack of success he had in dealing with the VA and our great Vets.” — part of a series of tweets Thursday.

McCain was a leading force in the Senate behind the law that gave veterans an option to go outside the Department of Veterans Affairs’ health care system and get private care at public expense under certain conditions. President Barack Obama signed the VA Choice legislation into law. Ignoring that reality, Trump persistently claims that he brought Choice into law when no one else could.

Trump signed a law in 2018 that expanded the options for using the Choice program established by Obama, McCain and other lawmakers.

The 2018 law is named after three lawmakers who were veterans of war. All of them now are dead. They are Rep. Samuel R. Johnson, R-Texas, and Democratic Sen. Daniel K. Akaka, D-Hawaii, and McCain, R-Ariz.

TRUMP: “Also, I never called John a loser and swear on whatever, or whoever, I was asked to swear on, that I never called our great fallen soldiers anything other than HEROES.” — tweet Thursday.

THE FACTS: He called McCain a loser.

In addition, The Associated Press has confirmed many of the comments Trump was reported by The Atlantic to have made disparaging fallen or captured U.S. service members, such as his description of the American dead in a military graveyard as “losers.”

As for McCain, Trump told a conservative forum in Iowa in 2015 that his view of McCain changed when McCain lost the 2008 presidential election to Obama. “He lost, so I never liked him as much after that, ‘cause I don’t like losers,” he said. Trump went on to dismiss McCain’s war service: “He’s not a war hero. He’s a war hero because he was captured. I like people that weren’t captured.”

Trump in 2015 also tweeted a news article on Twitter calling McCain a “loser.”

BIDEN: “When it got up to March, I kept saying, ‘Look, you’ve got to invoke,’ and you remember, I think I was the first — I may be mistaken — person calling for the Defense Production Act.” — comment after a news conference Wednesday.

THE FACTS: He is correct about being mistaken.

Biden issued a statement March 18 saying he was issuing a call for Trump to invoke the Defense Production Act to give priority to “and immediately increase domestic production of any critical medical equipment required to respond to this crisis — such as the production of ventilators and associated training to operate.” His call came the same day Trump signed an order to use his authority under the act.

Five days earlier a group of Democrats in Congress wrote to Trump asking him to use powers under the act, a step that Trump officials and others had been discussing publicly for several weeks. 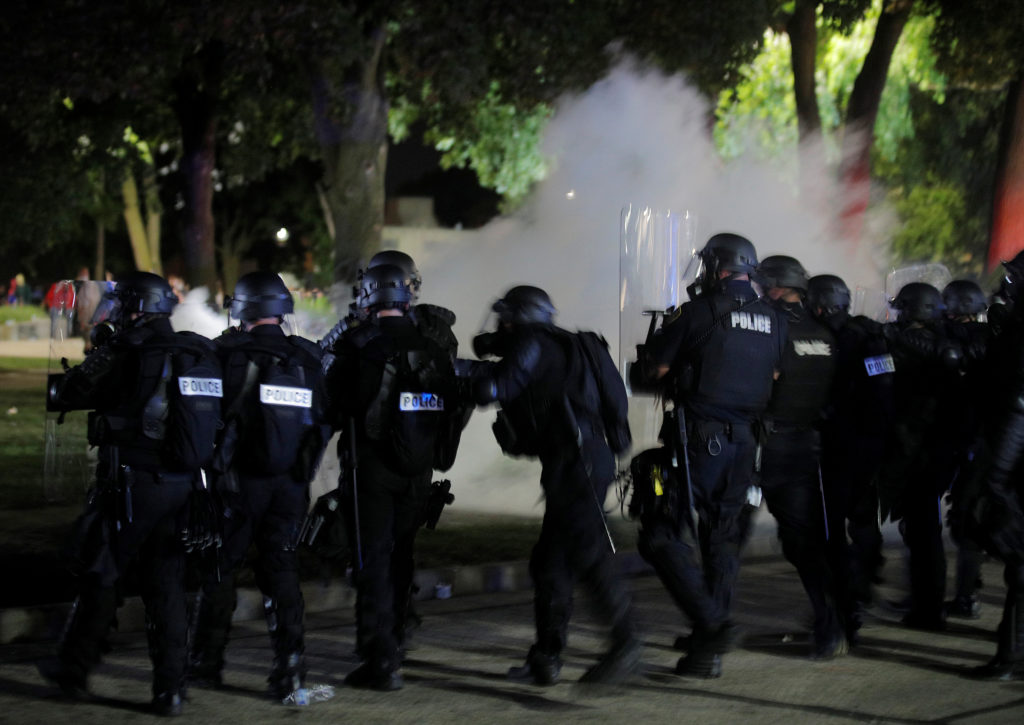 Police officers are seen during a protest following the police shooting of Jacob Blake, a Black man, in Kenosha, Wisconsin. Photo by Brendan McDermid/Reuters

TRUMP, on Wisconsin officials and the National Guard: “Once they responded and once we took, you know, control of it, things went really well.” — remarks in Kenosha on Tuesday.

TRUMP: “One of the reasons I’m making the trip today and going to Wisconsin is we’ve had such a big success in shutting down what would be, right now, a city — that would’ve been Kenosha — a city that would’ve been burnt to the ground by now. … And it all stopped immediately upon the National Guard’s arrival.” — remarks Tuesday before visiting Wisconsin.

THE FACTS: Not true. He had nothing to do with the deployment of the National Guard in Wisconsin. The federal government never “took control of it.”

Gov. Tony Evers, D-Wis., activated the state’s National Guard the day after a Kenosha police officer shot Jacob Blake, sparking protests and violence over police actions and racism. When National Guard forces from three other states came in to help, it was because the governor had asked for that help from fellow governors, not the White House.

Evers said National Guard troops from Arizona, Michigan and Alabama were operating under the control of those states and Wisconsin, “not in a federal status.” National Guards answer to governors and sometimes state legislatures, not Washington.

The federal government sent deputy marshals from the U.S. Marshals Service and agents from the FBI and the Bureau of Alcohol, Tobacco, Firearms and Explosives, about 200 in all. The restoration of order was primarily in the hands of National Guard units and local law enforcement.

TRUMP, asked if would condemn the actions of Kyle Rittenhouse, the 17-year-old charged in the shooting deaths of two men during Kenosha protests: “You saw the same tape as I saw. And he was trying to get away from them, I guess; it looks like. And he fell, and then they very violently attacked him. And it was something that we’re looking at right now and it’s under investigation. But I guess he was in very big trouble. He would have been — I — he probably would have been killed.” — news conference Monday.

THE FACTS: His implication that Rittenhouse only shot the men after he tripped and they attacked him is wrong. The first fatal shooting happened before Rittenhouse ran away and fell.

Trump did not say whom he meant by “they” — the two men he shot or others in pursuit of him. But he spoke in defense of someone who opposed racial justice protesters, who authorities say was illegally carrying a semi-automatic rifle and who prosecutors accuse of committing intentional homicide.

According to the criminal complaint released by prosecutors, victim Joseph Rosenbaum was shot and killed first, after following Rittenhouse into a parking lot, where Rosenbaum threw a plastic bag at the gunman and tried to take the weapon from him.

The medical examiner found that Rosenbaum was shot in the groin and back — which fractured his pelvis and perforated his right lung and liver — and his left hand. He also suffered a superficial wound to his left thigh and a graze wound to his forehead.

Rittenhouse then ran down the street and was chased by several people trying to stop him and shouting that he just shot someone, according to the criminal complaint and cellphone video footage.

He tripped and fell. Anthony Huber, who was carrying a skateboard, was shot in the chest after apparently trying to wrest the gun from Rittenhouse, the complaint said. A third man was shot and injured.

Rittenhouse’s lawyer said he acted to defend himself.

ATTORNEY GENERAL WILLIAM BARR on fraud in the vote-by-mail process: “Elections that have been held with mail have found substantial fraud and coercion.” — CNN on Wednesday.

THE FACTS: Actually, multiple studies have debunked the notion of pervasive voter fraud in general and in the vote-by-mail process.

The five states that relied on mail-in ballots even before the coronavirus pandemic — Colorado, Hawaii, Oregon, Washington and Utah — have said they have necessary safeguards in place to ensure against fraud and to prevent hostile foreign actors from co-opting the vote. More states intend to rely more heavily on mail-in voting this fall because of the pandemic.

The attorney general cited a report from more than a decade ago from a commission led by former President Jimmy Carter and former Secretary of State James Baker that said vote-by-mail was vulnerable to fraud. But the commission pointed out in a statement in May that it had found little evidence of fraud in states such as Oregon that had sufficient safeguards.

Barr also said he was basing on “logic” his concern that a hostile foreign actor could produce bogus ballots for the election. But senior U.S. officials said on a conference call with reporters last month that they had no intelligence to suggest that was happening.

BIDEN: “Donald Trump may be the only president in modern history to leave office with fewer jobs than when he took office.” — Wilmington, Delaware, speech Friday.

THE FACTS: Maybe yes, maybe no.

Not since Depression-era Herbert Hoover has a president left office with a record of fewer jobs than when he began.

This could happen to Trump because of the pandemic, but he could also end up with a small gain.

In August there were 4.7 million fewer jobs than there were when Trump was inaugurated in January 2017. But if he leaves office in five months, and if the economy adds more than 1 million jobs each month, as happened in July and August, he could end up in the black. There are signs, though, that the gains are slowing as businesses have recalled many of the workers who were temporarily laid off from restaurants, bars, retailers and other businesses. So Biden’s prediction could come true.