PARKLAND, Fla. — The Marjory Stoneman Douglas High School massacre a year ago renewed the national debate on guns and school safety, turned some victims’ parents and surviving students into political activists and at least temporarily ended the local sheriff’s career.

But Thursday’s anniversary will primarily be about remembering the 14 students and three staff members who died in the third high-profile mass shooting in Florida since 2016. An interfaith service will be held at a Parkland park, near the school, to remember the victims.

Many Stoneman Douglas students arrived on campus Thursday wearing headphones and the burgundy #MSDStrong T-shirts that have become an emblem of the tragedy.

Outside the school, angel stakes for each of the 17 victims bordered the school’s landscaped sign. While absenteeism was expected to be high Thursday, freshman Matthew Sabia said he attended to show support and participate in activities.

“I want to show respect to what happened. The students who were here are probably sad and don’t want to think too much about it. We don’t really talk about it,” he said. 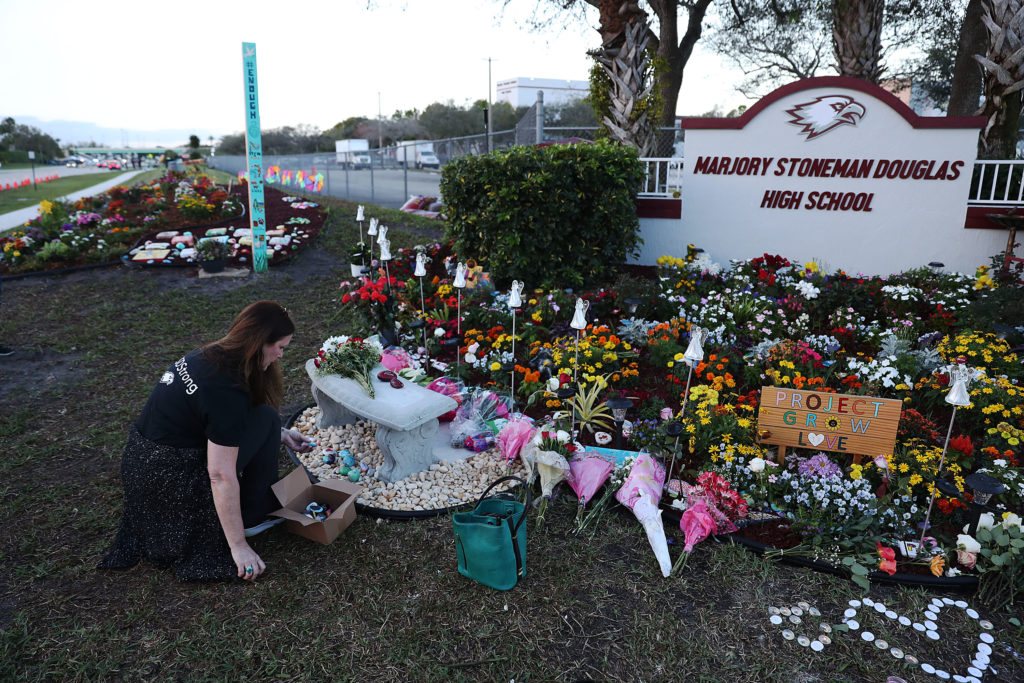 PARKLAND, FLORIDA – FEBRUARY 14: Suzanne Devine Clark visits a memorial setup at Marjory Stoneman Douglas High School for those killed during a mass shooting on February 14, 2019 in Parkland, Florida. A year ago on Feb. 14th at Marjory Stoneman Douglas High School 14 students and three staff members were killed during the mass shooting. (Photo by Joe Raedle/Getty Images)

Jogger Kara Cannizzaro stopped Thursday morning to pray at the memorial outside the school. She says “every single person of the community has been affected by this.”

Students also will perform service projects and observe a moment of silence and a non-denominational, temporary temple will open in neighboring Coral Springs for people to pay their respects. The structure will later be burned in a purification ceremony. Security throughout the community and at schools will be high.

“We don’t need (the anniversary) to remind us what happened. We live with it every day,” said businessman Andrew Pollack, whose 18-year-old daughter Meadow died in the attack. He met with President Donald Trump at the White House after the shooting and became an adviser to Gov. Ron DeSantis and his predecessor, Rick Scott. Other fathers like Fred Guttenberg and Manuel Oliver have become active in Democratic politics.

And victims’ relatives from both sides helped lead the successful push to remove Broward County Sheriff Scott Israel. DeSantis suspended the Democratic sheriff last month, citing incompetence in his handling of the shooting. Israel is fighting the suspension in the state Senate and says he will try to win back the office in next year’s election.

The massacre also led some Stoneman Douglas students to form the group “March for Our Lives,” which holds rallies nationwide calling for tougher gun regulations and toured the country registering young adults to vote.

“It was the kids themselves that made Parkland an unusual shooting,” said Adam Winkler, a professor at the University of California Los Angeles School of Law and gun rights expert. Just in Florida, 49 people died in the 2016 Pulse nightclub shooting in Orlando and five died at Fort Lauderdale’s airport in 2017. There have been other notable mass shootings across the country during that period — at a Las Vegas concert, a Pittsburgh synagogue and a Texas high school. But none resonated politically like Stoneman Douglas.

“What we haven’t seen is a mobilization of the students in quite the same way,” Winkler said.

But Thursday will be mostly a day to push aside politics. Victims’ families who have spoken publicly say they will spend the day quietly, visiting their loved one’s grave or participating in low-key events like a community walk.

“We are going to simply reflect and remember,” said Tony Montalto, president of the victims’ families’ organization, Stand With Parkland. “That is the best thing.” Montalto’s 14-year-old daughter Gina died in the shooting.

At Stoneman Douglas, students will mark the tragedy by working on service projects. They also can receive mental health counseling and visit therapy dogs. Volunteers will provide massages and manicures.

Mickey Pope, the district’s chief of student-support services, said the staff worked with mental health counselors, community groups, the victims’ families and others for four months to devise a plan they believe will honor those killed and allow students and staff to mourn.

Still, many Stoneman Douglas students are skipping school. For some it’s too emotional; others don’t want to be in the spotlight.

Alexis Grogan, a junior, said she’ll spend the day picking up beach trash, dedicating her work to those who died.

“I survived something and I don’t want to waste what I call a second chance at life because those who have passed don’t get that,” she said. “We have to make a difference for them.”

In Coral Springs, San Francisco-area artist David Best will open “The Temple of Time,” which at 1,600 square feet (150 square meters) represents the indefinite period it will take for the community to come to grips with the slayings. It’s an Asian design with a spire roof that has intricate designs cut into it.

Best rejected naming it “The Temple of Healing” because he said that is impossible for the victims and their families. Since 2000, he has built such temples worldwide, including in Northern Ireland for those killed in political strife and in Nepal for the 2015 earthquake victims. Like those structures, the Stoneman Douglas temple will be burned along with whatever mementos, writings and art that mourners leave behind. That ceremony will happen in May.

Most construction materials and other expenses are being paid by former New York Mayor Michael Bloomberg’s public arts foundation, but neither Best nor his workers are paid.

“When the smoke goes up and the flames go up, it will have a great meaning,” said volunteer Tony Bianco, an Army veteran and artist from Coral Gables,

Left: The initials of Marjory Stoneman Douglas High School and a placard are placed on the fence at Park Trails Elementary School, following a mass shooting in Parkland, Florida. Photo by Carlos Garcia Rawlin/Reuters