When the high court’s conservative majority struck down Roe v. Wade on Friday, the Hope Medical Center for Women in Shreveport, Louisiana, was packed with patients seeking care.

Some were already in the center’s waiting rooms. Hundreds more were scheduled for the next two weeks.

But with Roe now reversed, the dozens of procedures and consultations scheduled for the day had to be canceled on the spot. Louisiana is one of 13 states with trigger laws that outlaw abortion immediately or in the near future after Roe falls.

The air is thick with disbelief and grief today.

At Hope Medical Center, one of three abortion providers in the entire state, staffers and patients were facing a new reality.

“Some of the patients are truly in shock. Some of our staff are crying on the phone along with the patients. We have a patient that is so desperate, she is simply sobbing,” said Kathaleen Pittman, the clinical administrator at the Shreveport clinic. “It’s difficult. It’s very difficult.”

Pittman said, as of now, the clinic has not closed its doors, nor has it surrendered its licenses.

“We’re certainly here for the women that still need us to call and talk, or those that have been under our care that might have follow-up needs. We certainly are not going to abandon them. But I’m telling you, the air is thick with disbelief and grief today.” 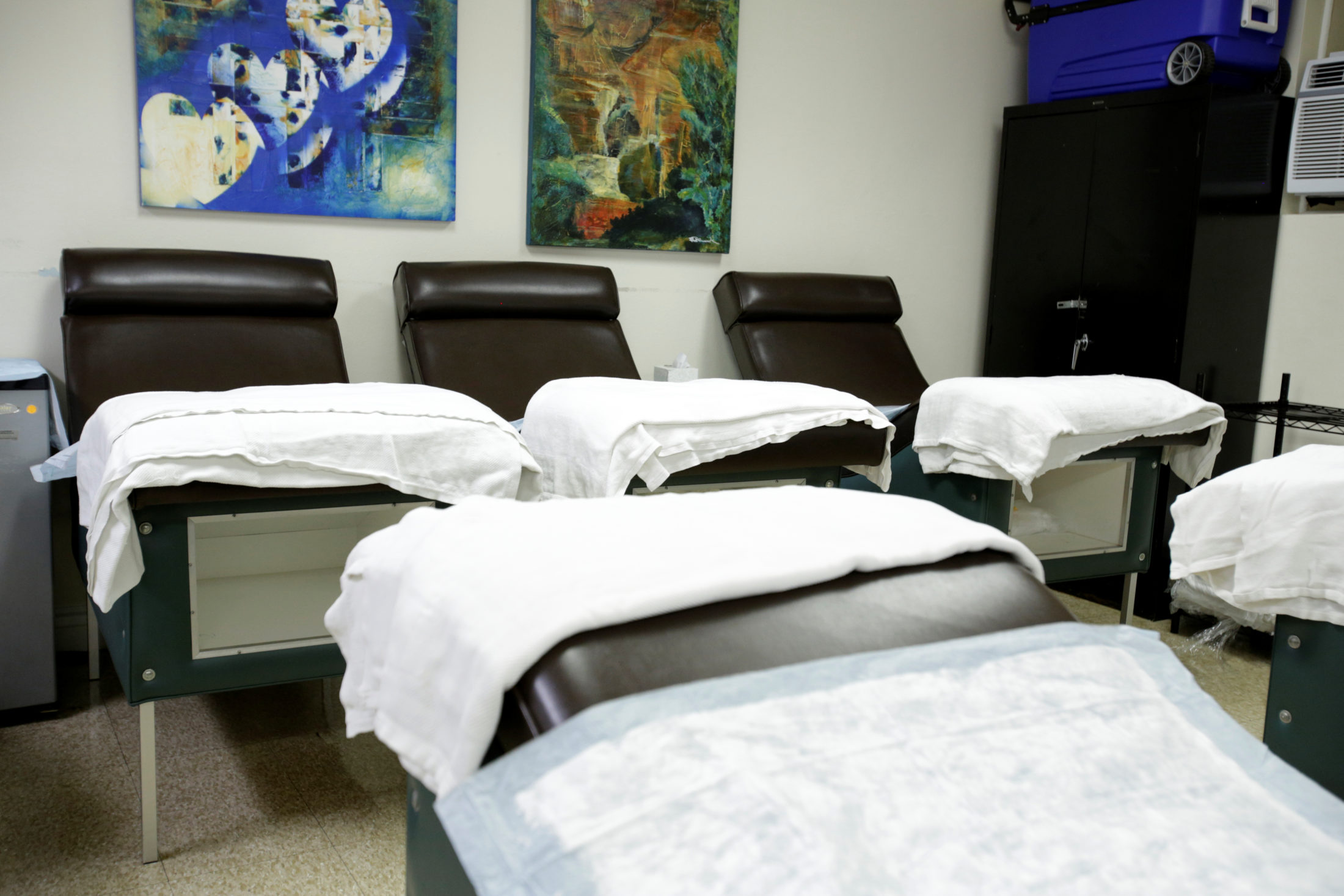 The recovery room is seen at the Hope Medical Group for Women in Shreveport, Louisiana. Photo taken February 2020. Photo by Lila Engelbrecht/Reuters

The clinic had already been overwhelmed for months after Texas enacted the nation’s then-strictest abortion law last fall, sending hundreds of patients into Louisiana to seek care. For now, the clinic is handling a steady stream of calls as staff provide as much information about their options and the availability of other clinics – outside the state – that will not be affected by this decision. Louisiana patients wanting to terminate their pregnancies surgically will have to travel possibly hundreds of miles, to Kansas, North Carolina or Illinois, where abortion remains legal, according to the Guttmacher Institute.

“It’s going to worsen their situations, especially for women who cannot get the care that they need and what they deserve and should be entitled to. Some are going to be forced to continue a pregnancy they cannot afford,” Pittman said.

Louisiana’s maternal mortality rate is the second highest in the nation, according to 2018 figures from the Centers for Disease Control and Prevention. According to state figures, the rate is about four times higher for Black mothers than it is for white mothers. The state also has the fifth highest infant mortality rate in the United States.

David Schmit, spokesperson for Lift Louisiana, an advocacy group for women and children, said the ruling will have “​​potentially devastating effects” on certain groups of people.

“Let’s be clear that this decision will not affect privileged people, mostly white, from accessing abortion services. Instead it empowers the state to continue to oppress Black, Indigenous, and other People of Color, people with low incomes, young people, people living in rural areas and other marginalized communities from accessing abortion care,” Schmit said in an email. “This oppression is rooted in anti-Black racism, white supremacy, patriarchy and misogyny.” 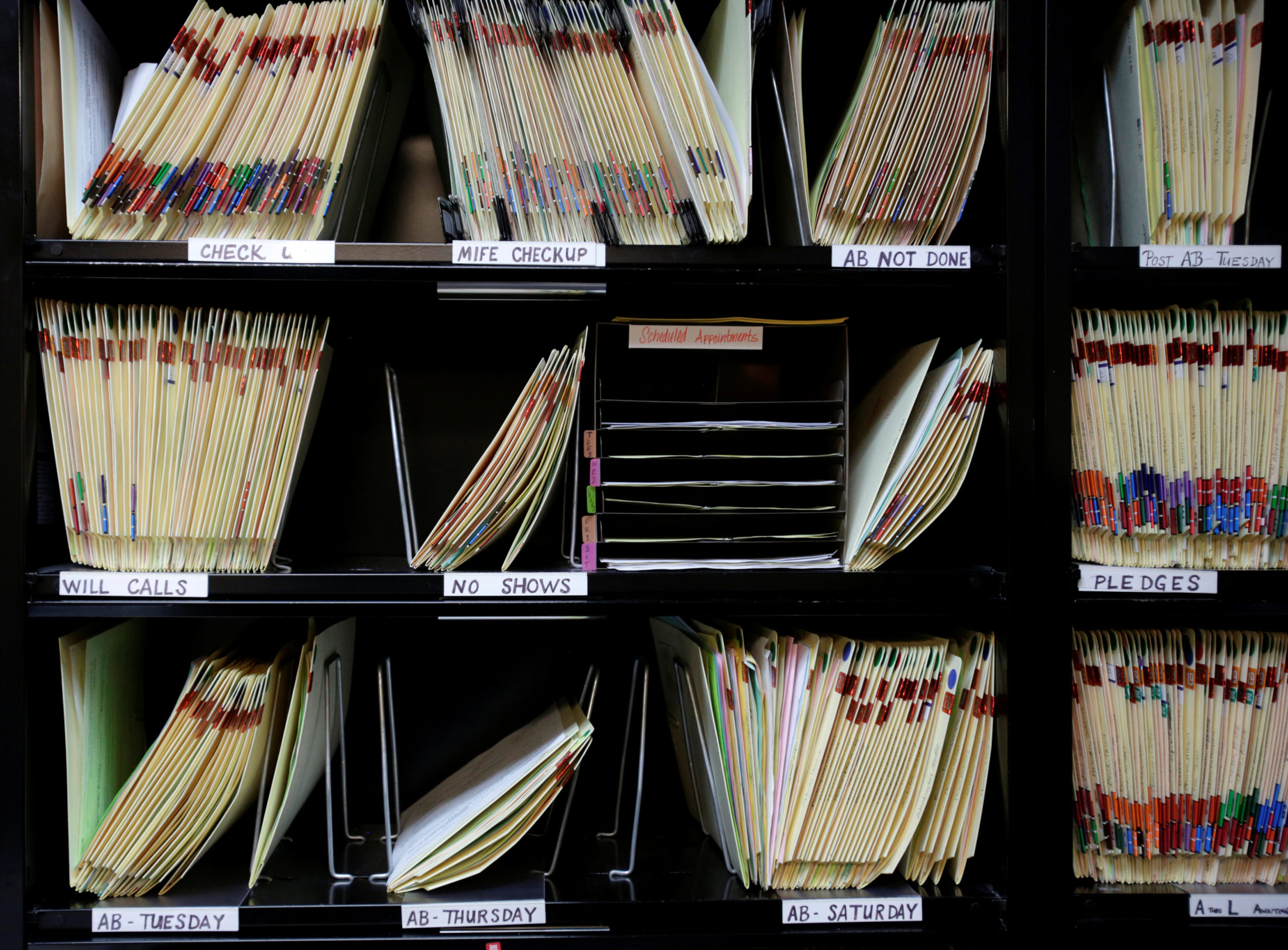 Patients’ files are organized on a shelf at the Shreveport clinic. Photo taken February 2020. Photo by Lila Engelbrecht/Reuters

Friday’s ruling triggered a law passed by the state legislature in 2006 that imposes an immediate prohibition of all abortions in Louisiana, except in cases where giving birth would threaten the mother’s life. There is also no exception for rape or incest.

Gov. John Bel Edwards, a Democrat who is not shy about his support for strict anti-abortion laws, called for providing resources to women impacted by the high court’s decision.

“I am and have always been unabashedly pro-life and opposed to abortion,” Edwards said in a statement shortly after the decision was handed down. “Being pro-life means more than just being against abortion. It means providing the necessary resources and implementing policies that provide real options and not just lip service to the children, women, and families.”

Edwards said it is critical that Louisiana funds services to support women, children, and families throughout their lives.

At least two rallies were planned in New Orleans on Friday night as abortion advocates react to the fallout. Many worry that the ruling will disproportionately affect women of color and marginalized communities the most.

“All we have is each other.”

Arséne DeLay, a New Orleans musician and activist, believes lives are at risk. A new generation of activism is needed, she said.

“All we have is each other, and it’s going to take full community participation to keep the desperation from not having access to reproductive healthcare from causing self-inflicted harm, and an even higher mortality rate in young girls, women, and the LGBTQ community,” she said. 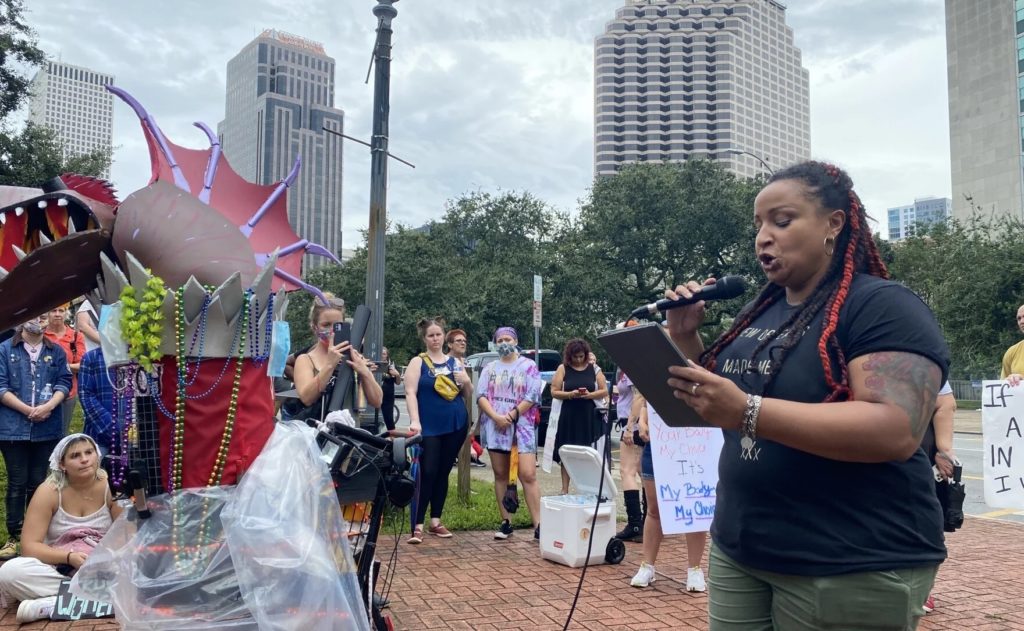 DeLay said she hopes people will use this moment to donate to local abortion funds, volunteer as clinic escorts, and most importantly, support the people and the organizations already doing the work.

“There is no need to attempt to reinvent the wheel,” she added.

Meanwhile, anti-abortion activists in the state celebrated the Supreme Court decision to end constitutional protections for abortion that had been in place for nearly 50 years. Democratic State Rep. Mandie Landry from New Orleans lamented the news that the state’s closures were already in effect in Shreveport, Baton Rouge and New Orleans.

“They’re closed. If they perform any abortion care, they go to jail, get arrested or fined heavily.”

This legislative session, lawmakers passed even stricter abortion laws, which increased penalties but exempts pregnant women from persecution. Medication-induced abortions, which now account for half of all abortions, according to the Guttemacher Institute, are illegal in Louisiana.

While Pittman is angry at the conservative justices of the Supreme Court, she lays the blame on state lawmakers.

“As far as what we’re faced with in Louisiana, never have I been more ashamed of my state as I am today,” she said shortly after the ruling. “If we had people in our state legislature that were in tune with what our citizens want and if they were in tune with their citizens’ needs, we would not be in this predicament. Roe would not matter.”

Instead, state lawmakers “have shown a blatant disregard for their citizens, especially persons of color and the marginalized communities,” she added.

Members of the Louisiana Right to Life applauded the high court’s decision and said at a news conference that it has compiled an extensive list of resources for pregnant and parenting moms at several parenting centers. However, critics say anti-abortion groups like Louisiana Right to Life rarely support bills to help women and families, including a raise in the minimum wage in Louisiana which would dramatically improve the economic positions of patients seeking care.

Still, at a Friday news conference, Benjamin Clapper, executive director of Louisiana Right to Life, said his group is “ready to help women in a post-Roe abortion-free future.”

“Today is a huge day. A celebration where we can now protect the rights of unborn children. We can protect their lives under the law,” Clapper said. “But, we know our work is not done. Through an abundance of public and private resources, Louisiana is ready to support women and children before and after birth.”

In Shreveport, Pittman said her clinic is considering further legal options, but for now she is focused on women who are confused by the news and staff who have seen their work come to an abrupt halt.

“Even though we anticipated bad news, it actually was even worse than I anticipated. It’s devastating. It truly is. We had to go into comfort mode with some of the patients,” Pittman said.

She said the center’s staff has been attempting to reach their patients to make sure they received the news – and that their scheduled appointments are now canceled.

“It’s very tough though because we have patients that are truly frightened about what’s going to happen now.”

Left: An exterior view of the Hope Medical Group for Women in Shreveport, Louisiana. Photo taken in February 2020. Photo by Lila Engelbrecht/Reuters