Asian Americans are the fastest growing group in the U.S., report finds

A new report from the Pew Research Center finds Asian Americans are the fastest-growing racial or ethnic group in the United States, bringing renewed attention to the growing economic and political power of Asian communities.

The Pew report, based on U.S. Census Bureau estimates, comes as Asian American communities reel from an uptick in hate-related violence, including the deadly March 16 shootings in Atlanta, spurred by racist rhetoric about the geographic origins of COVID-19.

It also comes as Asian American populations are the fastest growing share of U.S. voters and are pushing for more political representation. Congress recently held its first hearing addressing discrimination against Asian Americans in more than 30 years — an issue Asian American leaders say has been longstanding before the pandemic. The AAPI Victory Fund super PAC is also launching a new group to better understand Asian American voters.

READ MORE: What you can do to fight violence and racism against Asian Americans

Every single state in the country, including the District of Columbia, has seen its Asian population grow over the last two decades. California, Texas and New York — states with high concentrations of Asian American communities — saw the largest overall increases in numbers of people. But North Dakota and South Dakota saw the fastest growth rate, with Asian American groups tripling in population. In West Virginia, where the overall population declined between 2000 and 2019, the Asian population grew.

By 2060, the Asian American population, which Pew estimates currently at about 19 million, is expected to be almost 36 million. (The U.S. Census Bureau current estimate of 22.3 million is higher because it includes Asians who identify as multiracial. There are differing schools of thought on who counts as “Asian.”)

A portion of the growth in the national Asian American population stems from immigration. In 1965, the United States’ Immigration and Nationality Act changed restrictive national origin quotas, dramatically opening up immigration from Asian nations. After Mexico, the largest share of immigrants to the United States today comes from China, India and the Philippines. Among high-skilled immigration, about four out of five H-1B visas are awarded to workers from India or from China.

“The Asian American story is a very immigrant story where you have a large first-generation population that arrived recently in the United States,” said Neil G. Ruiz, associate director of race and ethnicity research at the Pew Research Center.

Asian American leaders continue to stress that the populations are not a monolith and advocate for more education about the history of these communities in the U.S.

“Asia is an extraordinarily enormous region of the world … so the experiences of Asian Americans are not uniform by any stretch,” Margaret Huang, president and CEO of the Southern Poverty Law Center (SPLC), told the PBS NewsHour in March. “Understanding Asian history in the country, understanding the different experiences of different communities will also go a long way to demonstrating how Asian Americans have always been part of the U.S. story.” 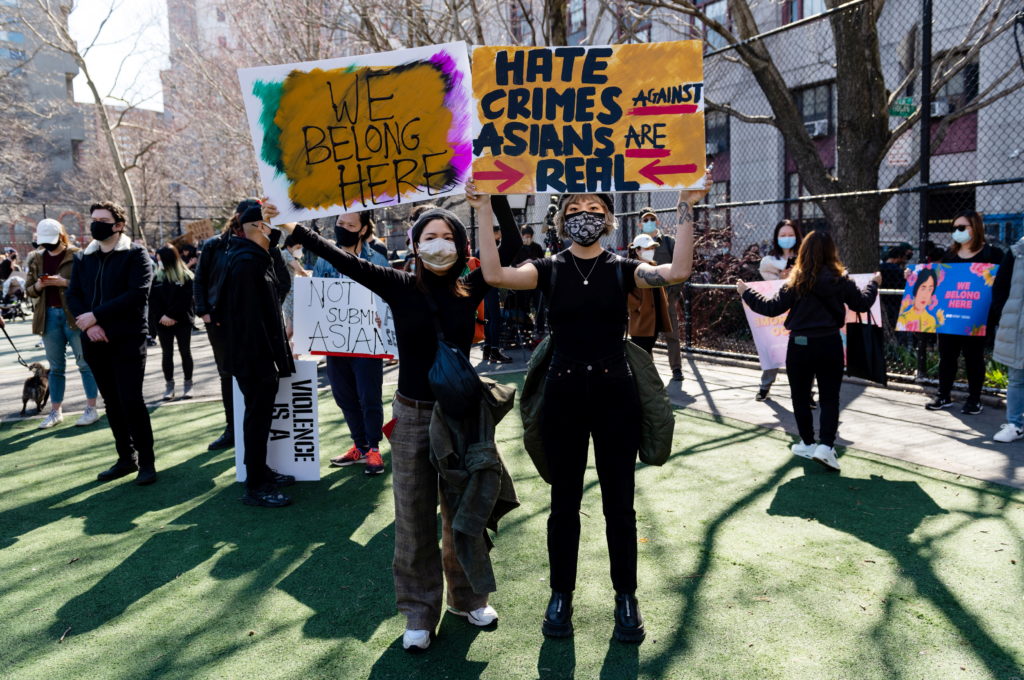 A rally advocating to end discrimination against Asian Americans and Pacific Islanders in New York City, on March 21, 2021. REUTERS/Eric Lee

Some Asian American advocates also emphasize the need for detailed ethnicity data to better understand the nuances of each community.

Karthick Ramakrishnan, professor at the University of California, Riverside, and founder of AAPI Data, said detailed ethnicity data is important to collect since Asians are the only racial group in the country who are majority foreign-born, yielding many differences in language, religion and socioeconomics.

“That is not to say the Asian American community is not unified. On many matters of public policy, Asian Americans are far more unified than you’d expect,” Ramakrishnan told the PBS NewsHour. “But there’s a need to collect that detailed data to know where they unify and where there is meaningful difference to pay attention to.”

WATCH: Tracing the history of anti-Asian violence in America

The steady rise in the Asian American population in the U.S. should also be of interest to corporations and other business entities, said Melany De La Cruz-Viesca, deputy director of the UCLA Asian American Studies Center. Businesses should be thinking about where Asian Americans are migrating, including places in the American South where they’re increasingly becoming part of the fabric of the region, she explained. Asian Americans’ purchasing power is expected to be $1.3 trillion by 2023, according to Nielsen.

In politically competitive states like Texas and Georgia, where the Asian American population has grown about 150 percent in the last two decades, it’ll be interesting to watch the community’s political influence, Ramakrishnan said. In the recent presidential election, for example, Joe Biden won Georgia with a slim margin of less than a half a percent, a win many attribute to turnout from the growing Asian American population in the state.

“What you saw in 2020 was a sign of things to come,” Ramakrishnan said.

Left: A child holds a sign with a U.S. flag at a "Stop Asian Hate" rally and vigil to remember the Atlanta shooting victims, in Bellevue, Washington, on March 20, 2021. REUTERS/Lindsey Wasson

Vignesh Ramachandran is a digital news editor for the PBS NewsHour. Ramachandran is also co-founder of Red, White and Brown Media, focused on building media representation and sharing South Asian American stories. Previously, he was at ProPublica, the Stanford Computational Journalism Lab and NBC News Digital.

‘Hate is learned’: Tracing the history of anti-Asian violence in America