SACRAMENTO, Calif. — Calls for justice and charges against two police officers who fatally shot an unarmed black man aren’t abating in California’s capital city after an autopsy showed Stephon Clark was shot in the back, a counter to the department’s statement that he was approaching officers when he was killed.

“His back was turned — he didn’t get a chance,” said Latarria McCain, who joined several hundred Friday in a downtown protest that lasted more than four hours, causing disruption and blocking traffic but largely remaining peaceful.

Sacramento native and former NBA player Matt Barnes has organized another rally for Saturday afternoon, hours before a Sacramento Kings-Golden State Warriors game will bring thousands of fans to the downtown arena that protesters have twice blocked.

“I want to make sure that these mistakes that keep happening have consequences,” player Garrett Temple said.

Earlier, the famed pathologist Dr. Bennet Omalu announced Clark was hit by eight bullets — six in the back, one in the neck and one in the thigh — and took three to 10 minutes to die. Police waited about five minutes before rendering medical aid.

“The proposition that has been presented that he was assailing the officers, meaning he was facing the officers, is inconsistent with the prevailing forensic evidence,” Omalu said at a news conference with family attorney Benjamin Crump.

He said it was not clear if Clark would have survived had he gotten immediate medical attention.

Sacramento police responded with a brief statement that said the department had not yet received an official autopsy report from the Sacramento County coroner’s office. It said the coroner’s death investigation is independent from the investigation being conducted by police and the state Department of Justice. 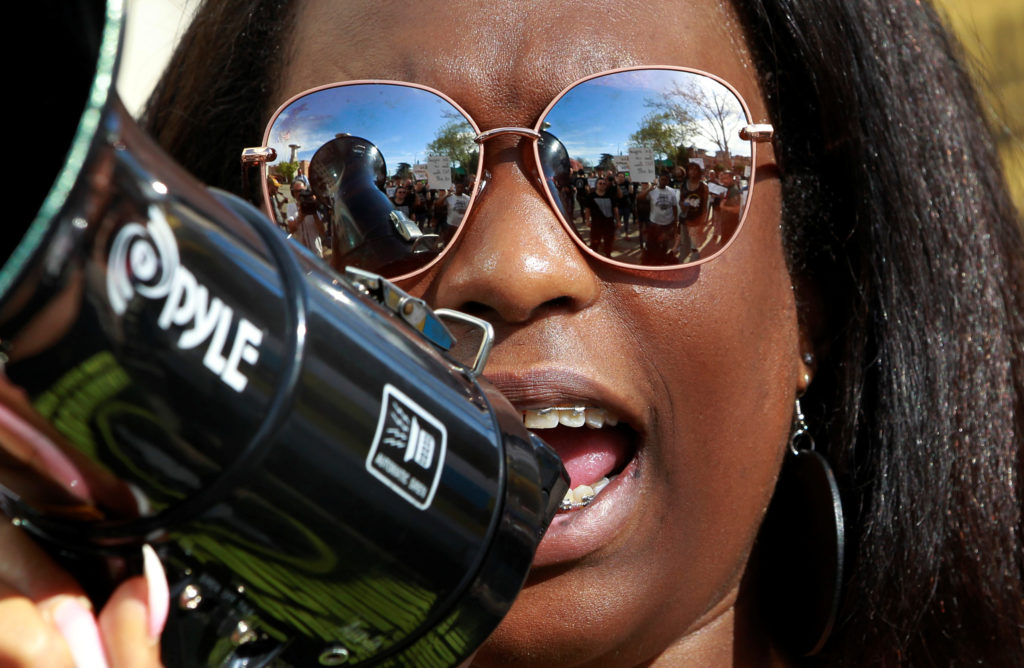 A day after the shooting, police distributed a press release that said the officers who shot Clark “saw the suspect facing them, advance forward with his arms extended, and holding an object in his hands.”

Police video of the shooting doesn’t clearly capture all that happened after Clark ran into his grandmother’s backyard. He initially moved toward the officers, who are peeking out from behind a corner of the house, but it’s not clear he’s facing them or that he knows they are there when they open fire after shouting “gun, gun, gun.”

After 20 shots, officers call to him, apparently believing he might still be alive and armed. They eventually approach and find no gun, just a cellphone.

READ NEXT: What we learned from an independent autopsy into Stephon Clark’s death

“When a young man who is 22 is shot down in his grandma’s backyard, which is supposed to be a safe place, I don’t know. What’s beyond a crisis?” said Nikki Whitfield, who works at a local adoption agency and attended the community forum.

With a joyous but somber feel, the event marked a change in tone from the protests that have disrupted the capital city’s downtown. But the message was similar, with several hundred members of the black community discussing police brutality and calling out of the names of black people who have been killed by law enforcement.

Later, protesters chanted outside City Hall before marching through downtown for more than four hours. Black Lives Matter Sacramento leaders helped diffuse tension at several points, including when protesters had a brief standoff with police by an interstate ramp and later when the police handcuffed a hotel door shut as protesters tried to enter, according to Capital Public Radio. But confrontations between the protesters and police or other civilians were minimal and the march was largely peaceful.

Gov. Jerry Brown issued his first statement on the situation Friday, calling it a tragic death that “raises a number of very serious questions and I support the California Attorney General’s independent oversight of the investigation.”

The autopsy was released a day after an emotional funeral service. The Rev. Al Sharpton delivered the eulogy and praised demonstrators for their restraint and urged them to follow the lead of the Rev. Martin Luther King Jr. and his advocacy of nonviolent protest.

U.K. defends vaccine decision amid criticism it moved too fast