Biden seeks to move quickly and build out his administration

Nation Nov 8, 2020 6:12 PM EST
WILMINGTON, Del. — President-elect Joe Biden signaled on Sunday he plans to move quickly to build out his government, focusing first on the raging pandemic that will likely dominate the early days of his administration.

Biden named a former surgeon general, Dr. Vivek Murthy, and a former Food and Drug Administration commissioner, David Kessler, as co-chairs of a coronavirus working group set to get started, with other members expected to be announced Monday.

Transition team officials said that also this week Biden will launch his agency review teams, the group of transition staffers that have access to key agencies in the current administration to ease the transfer of power. The teams will collect and review information such as budgetary and staffing decisions, pending regulations and other work in progress from current staff at the departments to help Biden’s team prepare to transition. White House officials would not comment on whether they would cooperate with Biden’s team on the review. 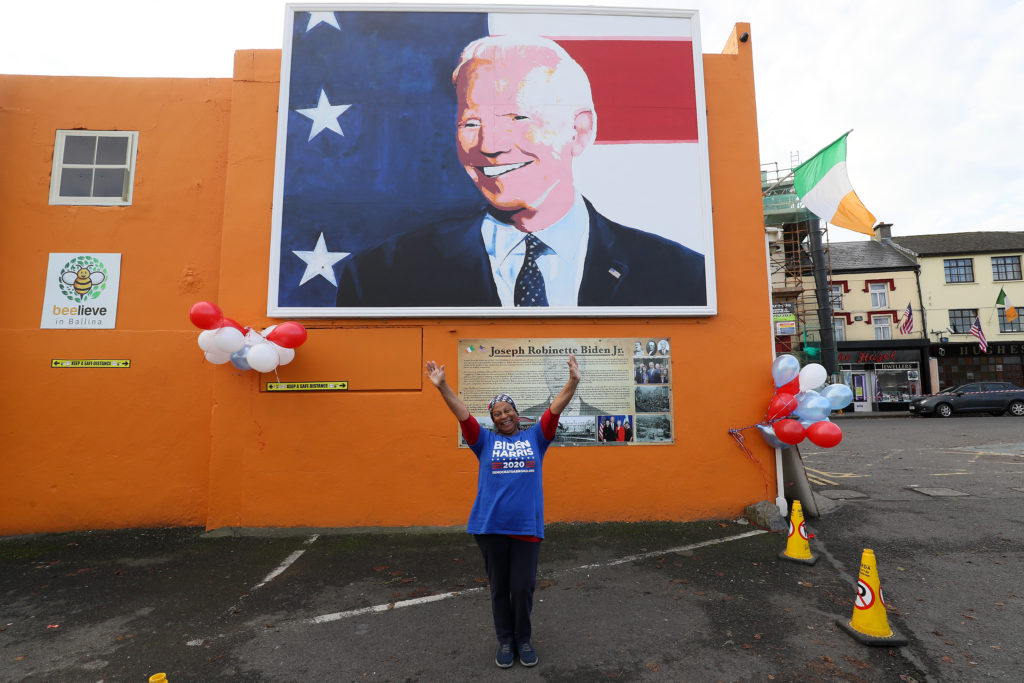 “People want the country to move forward,” said Kate Bedingfield, Biden deputy campaign manager, in an interview on NBC’s “Meet the Press, and see Biden and Vice President-elect Kamala Harris “have the opportunity to do the work, to get the virus under control and to get our economy back together.”

It’s unclear for now whether President Donald Trump and his administration will cooperate. He has yet to acknowledge Biden’s victory and has pledged to mount legal challenges in several closely contested states that decided the race.

Biden adviser Jen Psaki pressed for the Trump-appointed head of the General Services Administration to quickly recognize Biden as the president-elect, which would free up money for the transition and clear the way for Biden’s team to begin putting in place the transition process at agencies.

“America’s national security and economic interests depend on the federal government signaling clearly and swiftly that the United States government will respect the will of the American people and engage in a smooth and peaceful transfer of power,” Psaki said in a Twitter posting.

A GSA official said Sunday that step had not been taken yet.

A bipartisan group of administration officials from the Barack Obama, George W. Bush, and Bill Clinton administrations on Sunday called on the Trump administration to move forward “to immediately begin the post-election transition process.”

“This was a hard-fought campaign, but history is replete with examples of presidents who emerged from such campaigns to graciously assist their successors,” members of the Center for Presidential Transition advisory board said in a statement. 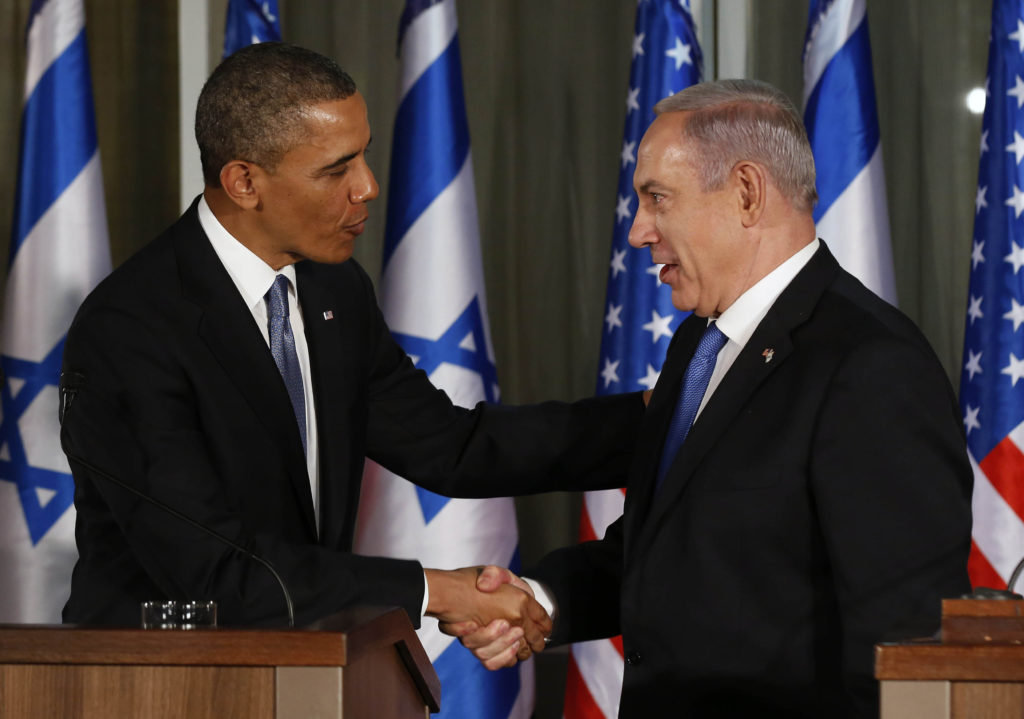 U.S. President Barack Obama and Israel’s Prime Minister Benjamin Netanyahu shake hands while they hold a joint news conference at the Prime Minister’s residence in Jerusalem, March 20, 2013. Making his first official visit to Israel, Obama pledged on Wednesday unwavering commitment to the security of the Jewish State where concern over a nuclear-armed Iran has clouded bilateral relations. Photo by Larry Downing / Reuters.

Biden aides said the president-elect and transition team had been in touch with Republican lawmakers. Israel’s prime minister, Benjamin Netanyahu, one of Trump’s closest allies, opened a Cabinet meeting on Sunday by congratulating Biden, a former vice president and longtime senator.

“I have a long and warm personal connection with Joe Biden for nearly 40 years, and I know him as a great friend of the state of Israel,” Netanyahu said. “I am certain that we will continue to work with both of them in order to further strengthen the special alliance between Israel and the U.S.”

“Though we have political differences, I know Joe Biden to be a good man, who has won his opportunity to lead and unify our country,” Bush said.

Biden faces key staffing decisions in the days ahead. The always-frenzied 10-week transition period before Inauguration Day on Jan. 20 already has been shortened by the extra time it took to determine the winner of Tuesday’s election.

The second Catholic to be elected president, Biden started his first full day as president-elect by attending church at St. Joseph on the Brandywine near his home in Wilmington, as he does nearly every week. After the service, he visited the church cemetery where several family members have been laid to rest, including his late son, Beau.

Beau Biden, a former Delaware attorney general, died in 2015 from cancer. Before his death, he had encouraged his father to make a third run for the White House.

Joe Biden said Saturday in a victory speech that he would announce a task force of scientists and experts Monday to develop a “blueprint” to begin beating back the virus by the time he assumes the presidency. He said his plan would be “built on bedrock science” and “constructed out of compassion, empathy and concern.” 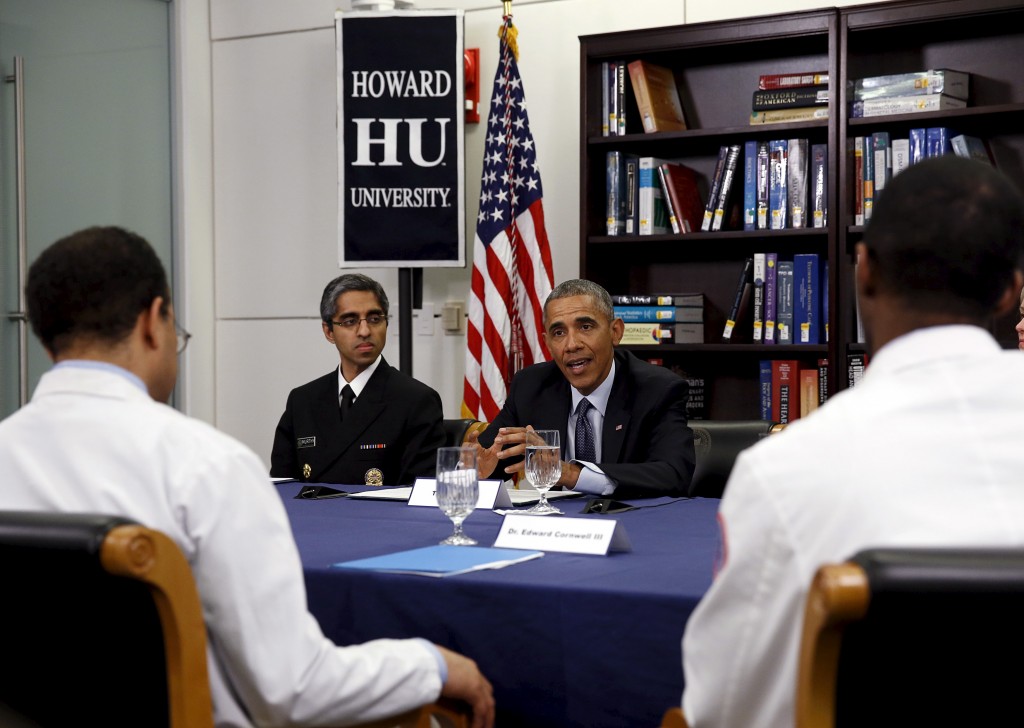 Murthy, who had advised Biden during the campaign, was named to a four-year term as surgeon general in 2014 by President Barack Obama. Murthy was asked to resign by Trump months into the Republican’s term. Kessler was appointed as FDA commissioner by President George H.W. Bush and served in the position through President Bill Clinton’s first term in the White House.

Biden senior adviser Ted Kaufman said the transition team will focus on the “nuts and bolts” of building the new administration in coming days.

Biden may not make top Cabinet choices for weeks. But he built his presidential run around bipartisanship and he has spent the days since Tuesday’s election pledging to be a president for all Americans. That suggests he could be willing to appoint some Republicans to high-profile administration positions.

Many former Republican officeholders broke with Trump to endorse Biden’s campaign. Biden’s selection of some of them to join the new government could appease Senate Republicans, who may have to confirm many of Biden’s choices for top jobs. The GOP could retain control of the chamber after two special elections in Georgia on Jan. 5.

Still, too much across-the-aisle cooperation could draw the ire of progressives. Some already worry that uncooperative Senate Republicans could force Biden to scale back his ambitious campaign promises to expand access to health care and lead a post-pandemic economic recovery that relies on federal investment in green technology and jobs to help combat climate change. 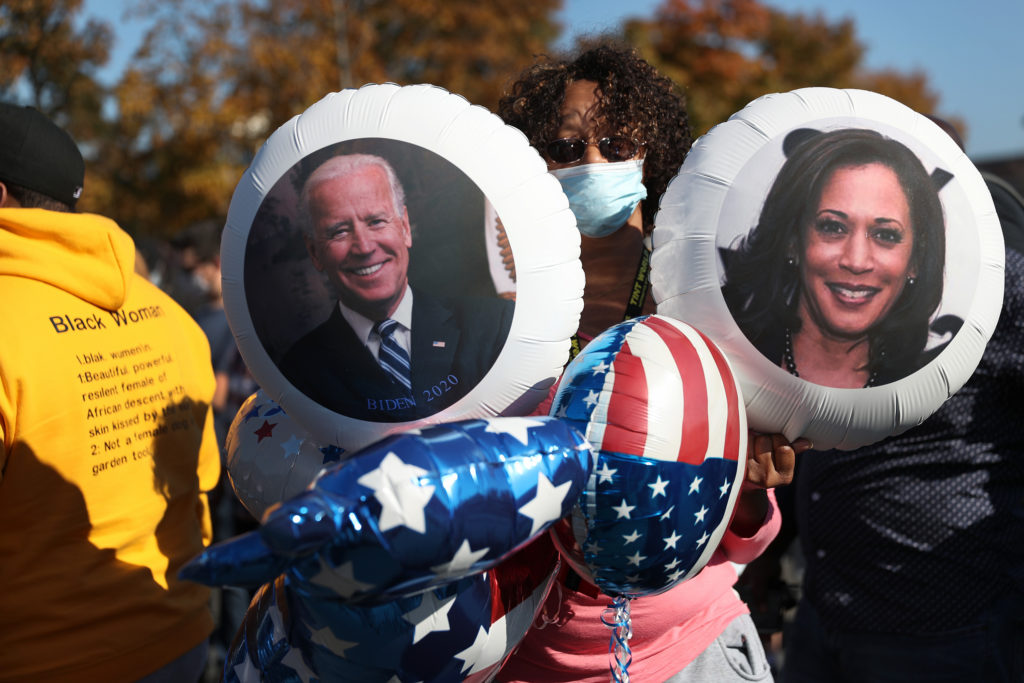 Violetta Smith celebrates the news that Democratic presidential nominee Joe Biden has seemingly won the election while waiting at the Chase Center where Mr. Biden is expected to make an announcement on November 07, 2020 in Wilmington, Delaware. Votes are still being counted in his race against incumbent U.S. President Donald Trump. Photo by Joe Raedle/Getty Images

“I think there will be a huge misuse of the word ‘unity’ to imply that we need to water down the ideas that Joe Biden just campaigned on,” said Adam Green, co-founder of the Progressive Change Campaign Committee. He said the country was more united around bold solutions to big problems than small-scale efforts.

Biden’s efforts at bipartisan reconciliation could still be derailed by Trump’s refusing to concede the race.

Symone Sanders, a Biden campaign senior adviser, said that while several Republican lawmakers have been in contact with the president-elect in recent days, the campaign has yet to hear from White House officials.

“I think the White House has made clear what their strategy is here and that they are going to continue to participate and push forward these flailing and, in many — in many respects, baseless legal strategies,” Sanders said on CNN’s “State of the Union.”

Sen. Mitt Romney, R-Utah, said Trump had a right to pursue recounts and legal challenges. But he noted that those efforts will unlikely change the outcome and he urged the president to dial back his rhetoric.

“I think one has to be careful in the choice of words. I think when you say the election was corrupt or stolen or rigged that that’s unfortunately rhetoric that gets picked up by authoritarians around the world. And I think it also discourages confidence in our democratic process here at home,” Romney said on NBC.