In nation’s capital, Biden supporters embrace win as moment of change, but are conscious of work ahead

In the hours after the presidential election was called for Joe Biden on Saturday, while President Donald Trump was at his golf course in Virginia, the streets around the White House filled with revelers — some there to celebrate Biden, some to celebrate running mate Kamala Harris’ historic achievement, and many to celebrate the eviction of the current chief resident of “the people’s house.”

“We’ve had these really four difficult years with President Trump and just seeing so many communities hurting,” said Eric Haber, 45, a Maryland resident who drove about an hour from Baltimore to Washington, D.C., with his wife and two young sons to celebrate Biden’s victory. “I think we’re just so excited that we are at a moment of change.”

“The removal of this [administration] hanging over our head is gone. … This era is over.”

Terence Peterson, 58, from Virginia, said the upbeat atmosphere brought to mind stories of his father’s Black ancestors banging pots and pans in the streets of Alabama when they learned the Civil War was over.

“I’m not equating where we are today with slavery, but I’m saying that the removal of this [administration] hanging over our head is gone. … This era is over,” Peterson said.

After more than four days of ballot counting in several key battleground states, the Associated Press and all major news networks declared Biden the winner of Pennsylvania and its 20 electoral votes, putting him over the 270 electoral vote threshold needed to win the White House. Immediately following the news of his win, people in major cities around the country came out in the thousands to join in celebration — cheering, playing music, dancing, honking car horns. After a year marked by protests, this was a gathering of a different sort: It was a nationwide party.

The conclusion of the presidential election comes at a historic time for the country. Americans continue to grapple with the economic and personal toll of the COVID-19 pandemic that, to date, has infected more than 9.7 million and killed more than 236,000 in the U.S. Simultaneously, mass protests against police brutality and racial inequality following the killing of George Floyd in May have roiled the nation.

The Biden victory holds its own historical significance. Biden is the first challenger to defeat an incumbent president in 28 years. Sen. Kamala Harris is also the first woman, first Black person and first South Asian American elected to the vice presidency. 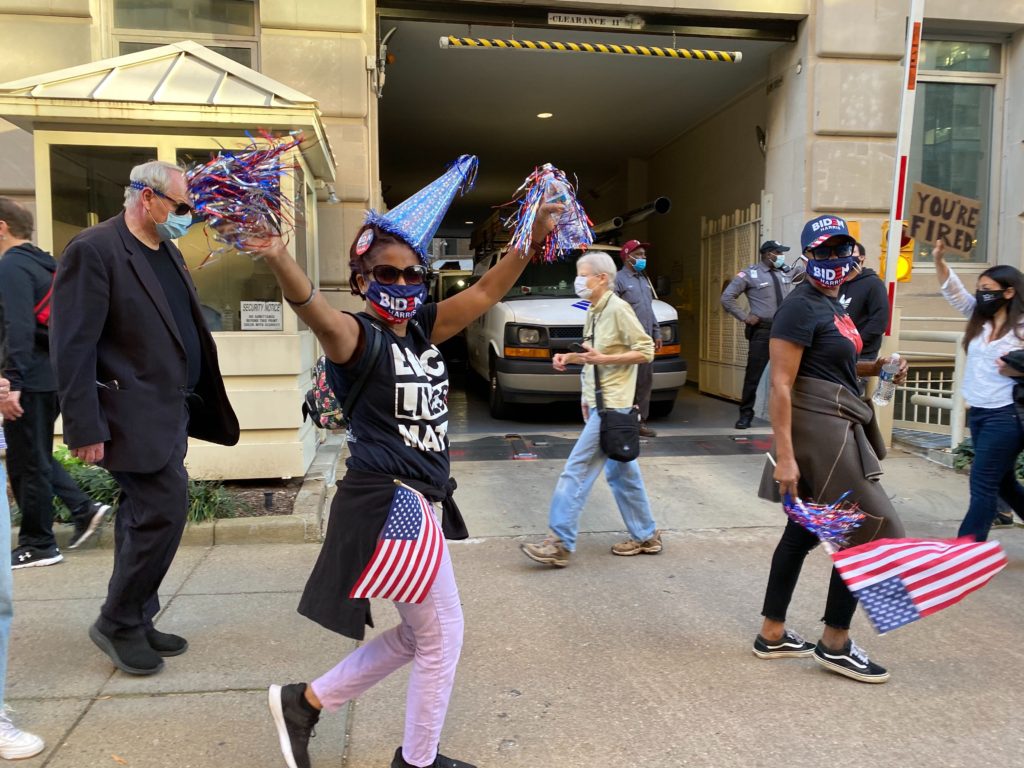 The significance of Harris’ imminent presence in the White House resonated with many women of color on Saturday.

“We can say that for the first time we [Black women] have been validated. That we are smart, talented, exceptional women who’ve worked hard at everything,” said Virginia resident Theresa Peterson, 57. “To see my [Alpha Kappa Alpha] sorority sister be elected as vice president of these United States of America is full circle.”

“I was happy to see a woman of color being chosen as the vice presidential running mate. That takes us so much further,” said Jackie Walker, 56, a District resident. “It’s been encouraging to me, the little that I’ve seen, in terms of Biden and Harris organizers who are very diverse.”

But Biden and Harris each have a record to reconcile. Both have received criticism from more progressive Democratic voters. Biden has faced pushback for his moderate politics and support for the 1994 Violent Crime Control and Law Enforcement Act criticized for establishing minimum sentences that increased incarceration. Harris has received pushback for not doing enough during her time as California’s attorney general to hold police accountable for misconduct, and for championing a state law that punished parents of habitually truant school children, among other things.

“This whole system was built on cornerstones of white supremacist capitalist patriarchy and we need candidates who are really willing — with proven track records — to shake those foundations up and tear them down. I’m afraid those folks aren’t Biden and Harris,” said Constance Paige Young, 37, a District resident. 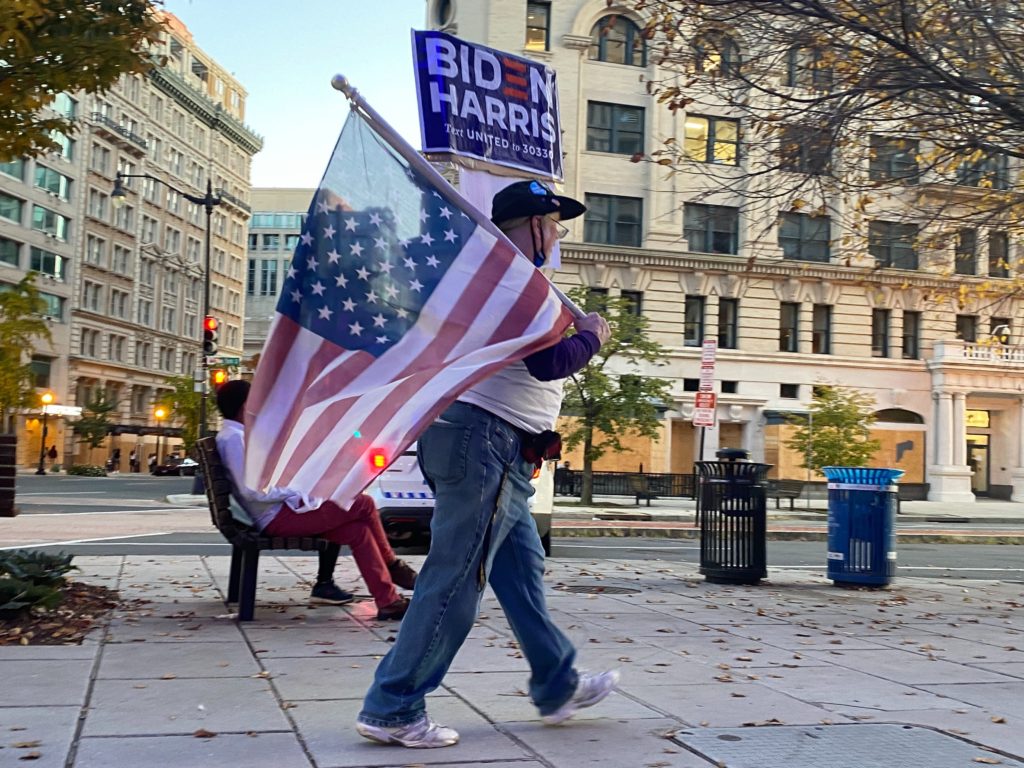 A man walks in Washington, D.C., with a sign supporting Joe Biden and Kamala Harris, who were elected President and Vice President on Saturday, November 7, defeating President Donald Trump. Thousands gathered in the nation’s capital to celebrate their victory. Photo by Deema Zein/PBS NewsHour.

“We’re excited that Biden won, but we think now is the time to really hold him accountable and to really push him a little more,” said Diba Ghaed, 19, of Maryland. “We want him to be, not just the Democratic president, but the Democratic president that represents the youth.” She and her friend Melat Eskender, also 19, from Ohio, said they preferred Vermont Sen. Bernie Sanders in the Democratic primaries, but fully embraced Biden when it was clear he would be the party nominee. They want to see more focus on climate change as well as uplifting low-income communities and communities of color.

The general takeaway sentiment from the happy crowd outside the White House was that there’s still work to be done. But many, like 25-year-old Kimberly Agyekum, a District resident, expressed confidence in the country’s ability to move closer on the issues she cares about under the Biden administration.

“The next four years are going to be challenging, but I hope that [Biden and Harris] recognize where their base is and where America is going.”

Left: Thousands gathered in Washington, D.C., to celebrate the victory of Joe Biden and Kamala Harris, who were elected President and Vice President on Saturday, November 7. Photo by Deema Zein/PBS NewsHour.