The images — men on horseback with long reins, corralling Haitian asylum seekers trying to cross into the U.S. from Mexico — provoked an outcry. But to many Haitians and Black Americans, they’re merely confirmation of a deeply held belief:

U.S. immigration policies, they say, are and have long been anti-Black.

The Border Patrol’s treatment of Haitian migrants, they say, is just the latest in a long history of discriminatory U.S. policies and of indignities faced by Black people, sparking new anger among Haitian Americans, Black immigrant advocates and civil rights leaders.

They point to immigration data that indicate Haitians and other Black migrants routinely face structural barriers to legally entering or living in the U.S. — and often endure disproportionate contact with the American criminal legal system that can jeopardize their residency or hasten their deportation.

Haitians, in particular, are granted asylum at the lowest rate of any nationality with consistently high numbers of asylum seekers, according to an analysis of data by The Associated Press.

“Black immigrants live at the intersection of race and immigration and, for too long, have fallen through the cracks of red tape and legal loopholes,” said Yoliswa Cele of the UndocuBlack Network, a national advocacy organization for currently and formerly undocumented Black people.

“Now through the videos capturing the abuses on Haitians at the border, the world has now seen for itself that all migrants seeking a better tomorrow aren’t treated equal when skin color is involved.” 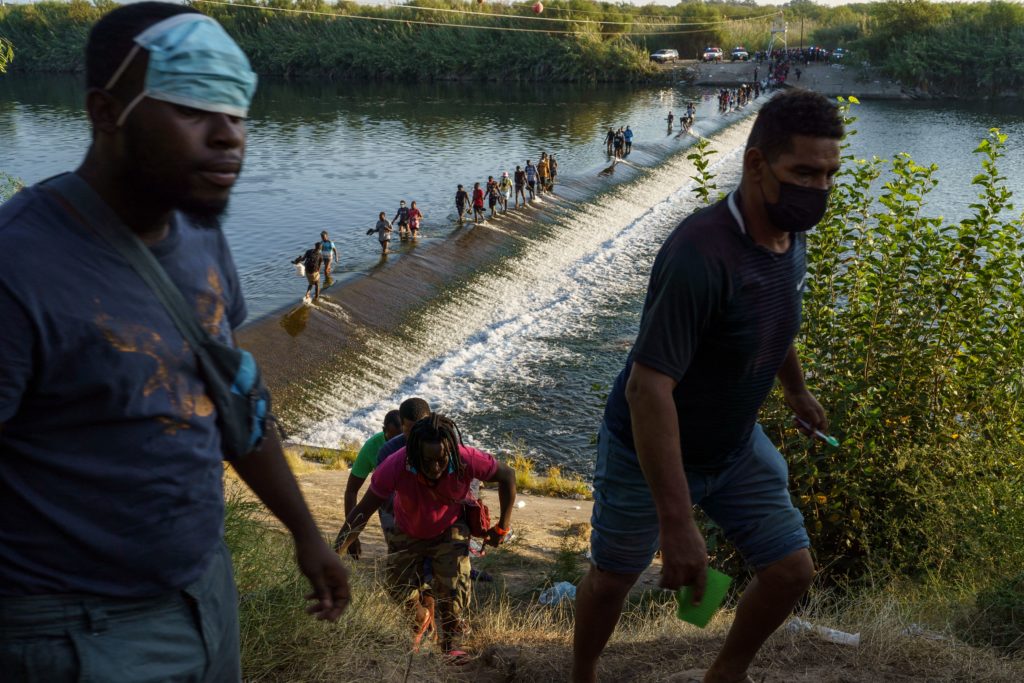 Haitian migrants cross the Rio Grande to get food and supplies near the Del Rio-Acuña Port of Entry in Ciudad Acuña, Mexico, on Sept. 18, 2021. Photo by Paul Ratje/AFP

Between 2018 and 2021, only 4.62% of Haitian asylum seekers were granted asylum by the U.S. — the lowest rate among 84 groups for whom data is available. Asylum seekers from the Dominican Republic, which shares the island of Hispaniola with Haiti, have a similarly low rate of 5.11%.

By comparison, four of the five top U.S. asylum applicants are from Latin American countries — El Salvador, Guatemala, Mexico and Honduras. Their acceptance rates range from 6.21% to 14.12%.

Phillips, whose organization is on the ground helping Haitians in Texas, says this dates back to the early 1800s, when Haitian slaves revolted and gained independence from France, and has continued through decades of U.S. intervention and occupation in the small island nation.

She said the U.S., threatened by the possibility of its own slaves revolting, both assisted the French and didn’t recognize Haitian independence for nearly six decades. The U.S. also loaned money to Haiti so that it could, in essence, buy its independence, collecting interest payments while plunging the country into poverty for decades.

“This mentality and stigma against Haitians stems all the way back to that period,” Phillips said. 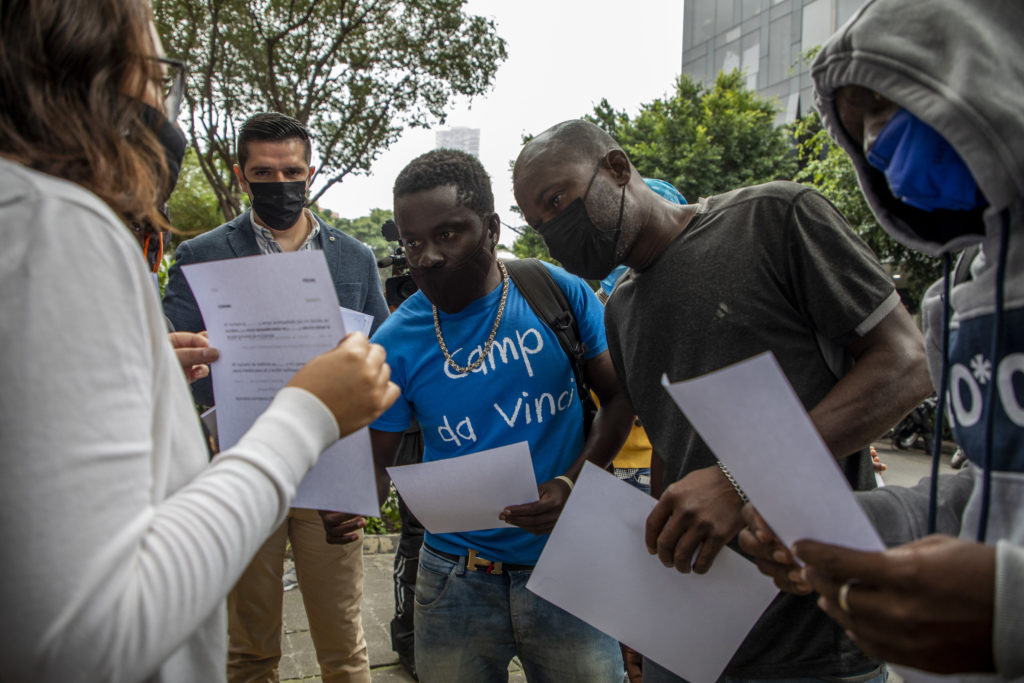 In this Sept. 23 photo, a staff member of the Mexican Commission for Refugee Assistance COMAR explains to migrants how to fill out an application for asylum. Photo by Jair Cabrera Torres/dpa

The U.S. violently occupied Haiti from 1915 to 1934 and backed former Haiti dictator Francois Duvalier, whose oppressive regime resulted in 30,000 deaths and drove thousands to flee.

While the U.S. long treated Cubans with compassion — largely because of opposition to the Communist regime — the administrations of George H.W. Bush and Bill Clinton took a hard line on Haitians. And the Trump administration ended Temporary Protected Status for several nationalities, including Haitians and Central Americans.

Over and over, the U.S. has passed immigration legislation that excluded Black immigrants and Haitians, and promoted policies that unfairly jeopardized their legal status in the country, advocates said.

When they manage to enter the U.S., Black immigrants say they contend with systemic racism in the American criminal legal system and brutality of U.S. policing that has been endemic for people from across the African diaspora.

The Black Alliance for Just Immigration, a national racial justice and immigrant rights group, largely defines Black immigrants as people from nations in Africa and the Caribbean. By that definition, AP’s analysis of 2019 Department of Homeland Security data found 66% Black immigrants deported from the U.S were removed based on criminal grounds, as opposed to 43% of all immigrants.

Nana Gyamfi, BAJI’s executive director, said crimes of moral turpitude, including petty theft or turnstile jumping, have been used as partial justification for denying Black immigrants legal status. “We have people getting deported because of train fare,” she said.

Leaders within the Movement for Black Lives, a national coalition of Black-led racial justice and civil rights organizations, have pointed to the treatment of Haitians at the border as justification for their broader demands for defunding law enforcement agencies in the U.S.

Last year, following the murder of George Floyd, the coalition proposed sweeping federal legislation known as the BREATHE Act, which includes calls to end immigration detention, stop deportations due to contact with the criminal legal system, and ensure due process within the immigration court system.

“A lot of times in the immigration debate, Black people are erased and Black immigrants are erased from the conversation,” said Amara Enyia, a policy researcher for the Movement for Black Lives. 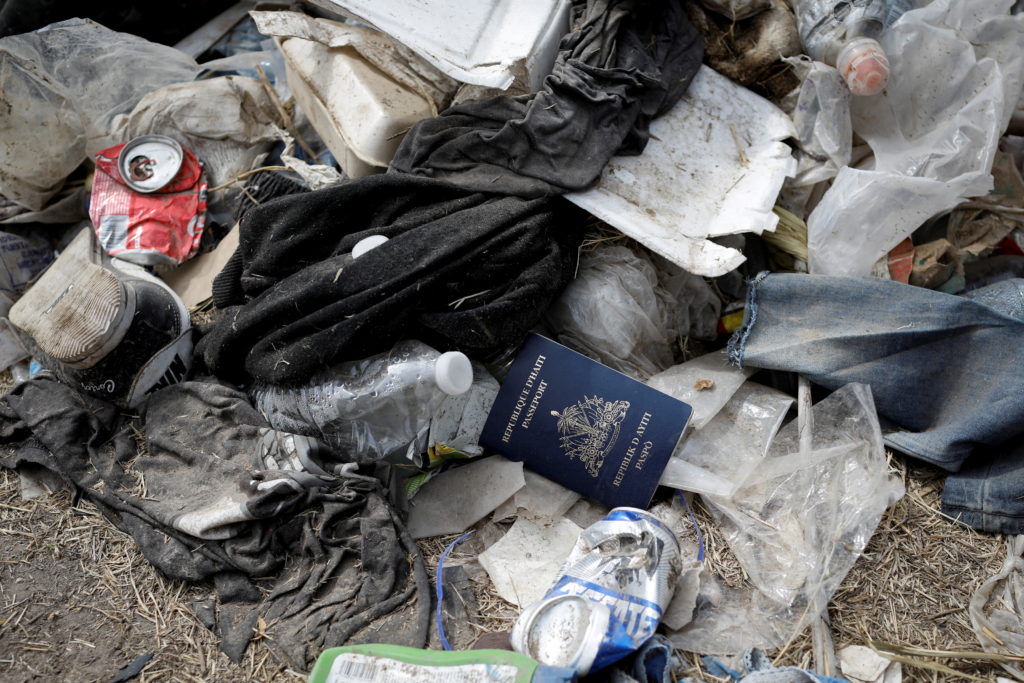 A Haitian passport is seen in a pile of trash near the International Bridge between Mexico and the U.S., where migrants seeking asylum in the U.S. are waiting to be processed, in Del Rio, Texas. Photo by Marco Bello/Reuters

Ahead of a Thursday tour of the migrant encampment in Texas, civil rights leaders called for an investigation into the treatment of Black migrants at the border and for an immediate end to the deportation of Black asylum seekers.

The camp is “a catastrophic and human disgrace,” the Rev. Al Sharpton said after an hourlong tour with several Black American leaders in Del Rio. “We will keep coming back, as long as is necessary.”

At the border and in Port-au-Prince, Haiti, where hundreds had already been sent on flights from the U.S., Haitians said there was no doubt that race played a major part in their mistreatment.

“They are grabbing people, they bother us, especially Haitians because they identify us by skin,” said Jean Claudio Charles who, with his wife and year-old son, had been staying in an encampment on the Mexico side near Texas out of fear of arrest and deportation to Haiti.

Claude Magnolie, a Haitian citizen removed from the U.S. this week, said he didn’t see Border Patrol agents treating migrants of other nationalities the way he and others were treated: “This is discrimination, that is how I call it, they are treating us very badly.”

And in Miami, immigrant rights advocate Francesca Menes couldn’t believe her eyes as she watched images of the asylum seekers being corralled by men on horseback.

“My family is under that bridge,” Menes said, referring to a cousin, his wife and their newborn who recently met up in a small border town in Texas. It took Menes’s cousin two months to make the trek from Chile, where he had been living with his brothers for three years to escape Haiti’s political tumult, violence and devastation.

“It made me sick,” Menes said. “This didn’t happen with unaccompanied minors. You didn’t see people riding on horseback, basically herding people like they were cattle, like they were animals.”

Menes’ outrage has only grown, as have her fears for her family. When she overheard her mother on the phone with family members this week, Menes said she wanted nothing more than to tell them to return to Chile.

“We’ve actually tried to discourage our families,” she said. “People are looking for a better life. And we try to kind of ground our families: Do you know what it means to be Black in America?”

Left: In this Sept. 19 photo, a U.S. border patrol officer cuts the way of a migrant asylum seeker as he is trying to return to the United States along the Rio Grande river, after having crossed from the United States into Mexico to buy food. Photo by Daniel Becerril/Reuters

Here’s the latest on the fate of Haitian migrants in Texas, Biden response to backlash